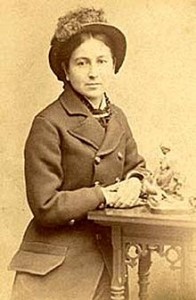 Born Inshata Theumba, which translated means Bright Eyes, La Flesche was baptized Susette La Flesche by her French fur trading grandfather.  In 1881 she married Thomas H. Tibbles, adding his name to her own.  To learn more about her biography and life click here.  (Note: As La Flesche is still in the process of being recovered, there is contradictory information in Wikipedia and other biographies both in print and on the web on her early years and Omaha family life.)

Below is a short five minute video about La Flesche and her start as a Native American advocate with the Standing Bear Trial.  This short video also helps to show how important recovering this woman can be to the people of her tribe today.

To read the full story with La Flesche’s intro, please click here to the Google books online adaption of Wide Awake, where she originally published this work. 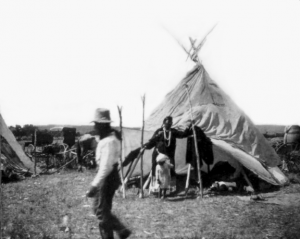 Genres of this Story

Writing Essentials by Regie Routman defines the traditional literature and folktales genre as:  “The songs, stories, myths, and proverbs of a people as handed down orally before they were ever written down.”

The tales from the Legends and Tent Stories perfectly fit in with this genre. They are originally oral tales from her tribe that were told to her by her own grandmother as entertainment and lessons for the children.

Seeing as this tale was not La Flesche’s original creation, nor was it originally in English, readers must remember that things were likely lost from the original piece when transcribed and then translated for the American readers.  Different cultures allow for different ways of thinking and thus understanding what the text’s meaning and purpose is.  The Western way of looking at this piece would be to consider it nothing more than a child’s tale much like those from the Mother Goose Nursery Rhymes.  This simplistic view of the literature ignores the cultural aspects of the Omaha people.