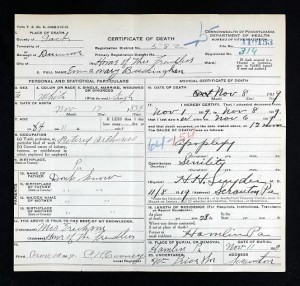 Emma May Buckingham was born in a mining and milling town in the Pocono Mountains of Pennsylvania in 1836 and died in 1919. She was  the fifth of ten children. Buckingham has said that she was an invalid as a young child, which must have inspired and influenced her later writing. Buckingham attended a private school in Hawley, Pennsylvania and later studied at Wyoming Seminary, also in her home state of Pennsylvania, where she graduated in 1856. For her graduate studies, she attended Fair Haven Young Ladies’ Seminary in New Haven, Connecticut and again returned to Wyoming Seminary. By 1858 she was a career teacher though when she was thirty she protracted a “nervous debility” and resigned from her post. By 1870 she decided to devote herself to writing A Self-Made Woman. She never married.  According to Jaime Osterman Alves she was passionate about teaching, self-culture, social reform, the temperance movement, education and the study of phrenology and eugenics.

A Self-Made Woman, Or; Mary Idyl’s Trials and Triumphs

A Self-Made Woman was published in 1873 in New York by Samuel R. Wells & Co. A new and revised edition was published in 1874 by the same publisher and again in 1875. Mary Idyl, Buckingham’s heroine, finds herself with an insatiable thirst for knowledge. She is also described as a cripple, the scarlet fever leaving her sickly and puny. She wants to have a proper education and is thus disowned by her father when she leaves. Mary attends school and becomes a governess to a local family. This is paralleled by Buckingham’s real life experiences. She believed self-culture should not only be open to men, but to women also. The main character improves herself both outwardly and inwardly — through education and surgery. The author believed women were living in a “Golden Age” and bid them to find other opportunities for themselves. This novel is refreshing for its time period as it addresses disfigurement and self-improvement for women. 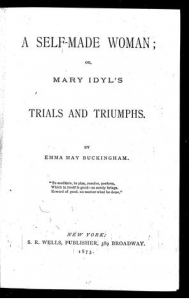 A Self-Made Woman, Or; Mary Idyl’s Trials and Triumphs