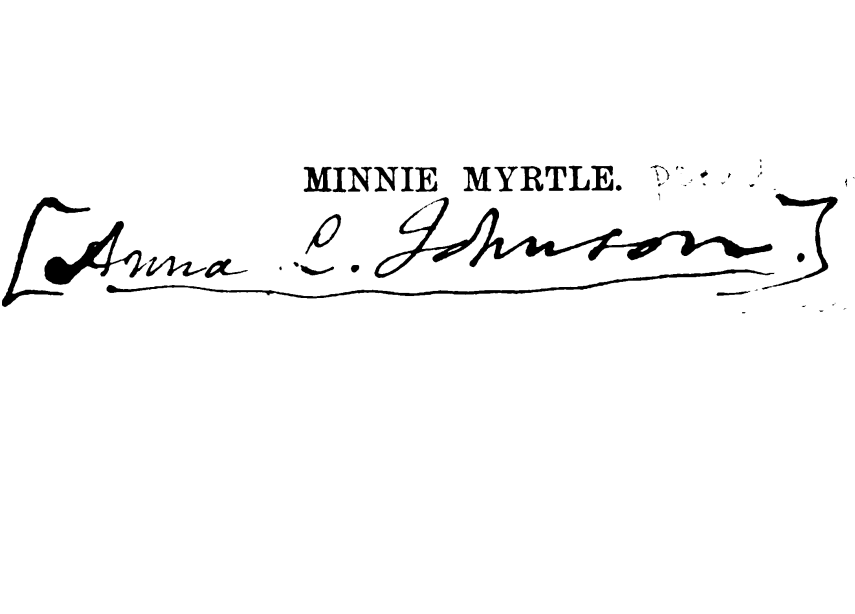 Image of Anna L. Johnson’s signature beneath the pseudonym of Minnie Myrtle on the title page to manuscript of “The Iroquois: Or the Bright Side of Indian Character.” Image source: Hathi Trust Digital Library.

Information about Anna L. Johnson is scarce. Aside from writing a handful of stories for the journal The Galaxy, Johnson is known as a seventh grade teacher in New York City beginning in 1864. There is also evidence to suggest that Johnson may have published a book under the pseudonym “Minnie Myrtle.” Because Minnie Myrtle was a common pseudonym of the time, it is difficult to discern which texts were written by Johnson. No dates of birth or death are available.

*There is some debate as to whether or not Johnson is the author of The Iroquois. Though several sources have listed Johnson as writing under the pseudonym of “Minnie Myrtle,” it is unclear whether or not The Iroquois is her work. One source lists the author as Anna C. Johnson and another contains a manuscript that bears the signature of Anna L. Johnson. 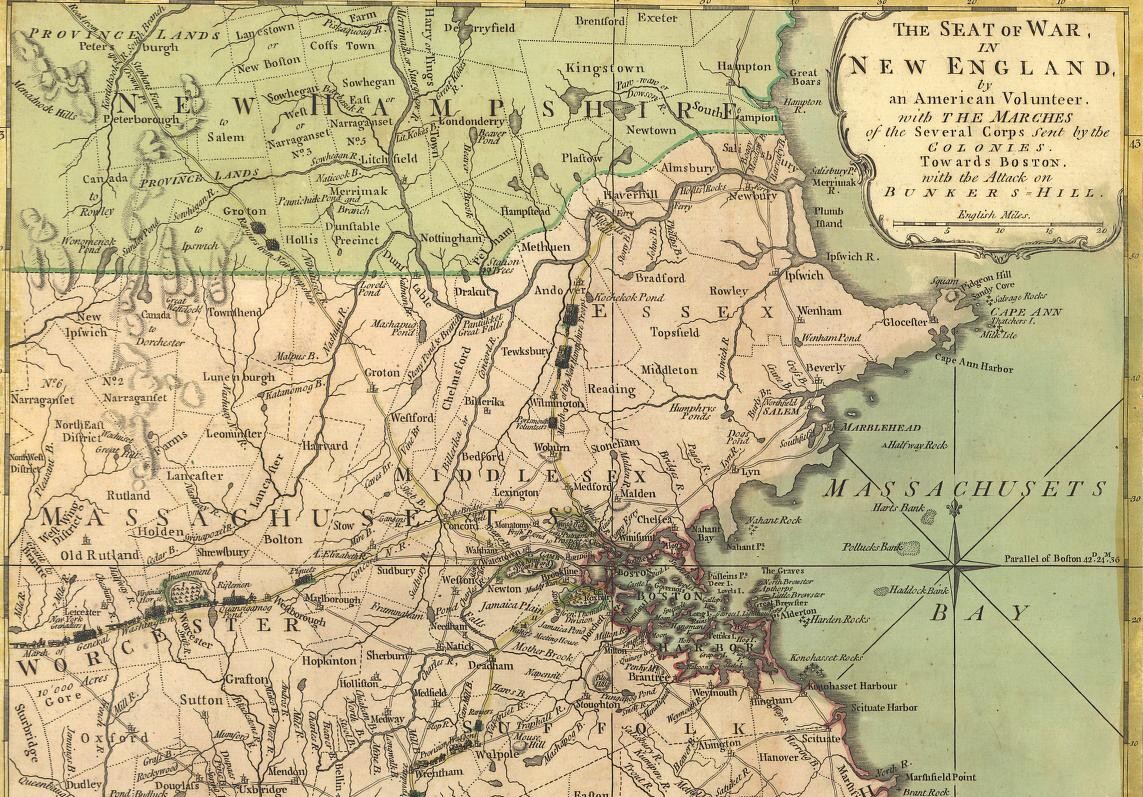 Much of “Aunt Penelope’s Girlhood” takes place in 1775, during the brink of the American Revolution. Pen, as she is known in the story, initially lives in the New Hampshire wilderness before moving twenty miles outside of Boston. Historical figures like Paul Revere and King George are mentioned in the narrative.

Even though the Civil War is never once mentioned in the story, the context is there. “Girlhood” was published in 1868, three years after the war ended and President Abraham Lincoln was assassinated. Much of the narrative explores the unintended consequences of independence: whether it be a nation or a person who loses, there is a large price to pay. America paid for independence with thousands of lives. Pen, on the other hand, sacrificed romantic love for a life of autonomy.

Women in the nineteenth century were encouraged to marry in order to be protected by the law. Without a husband, a woman stood little to no chance of advancing. She was often cast aside or deemed a spinster, which at this point in history, was anything but flattering. In “Girlhood,” Johnson breathes humanity into the spinster stereotype, showing that they’re not all gruesome and evil like Miss. Havisham in Charles Dickens’ Great Expectations. Pen is capable of compassion, love, and happiness, all thing most spinsters in nineteenth-century literature seem to lack. 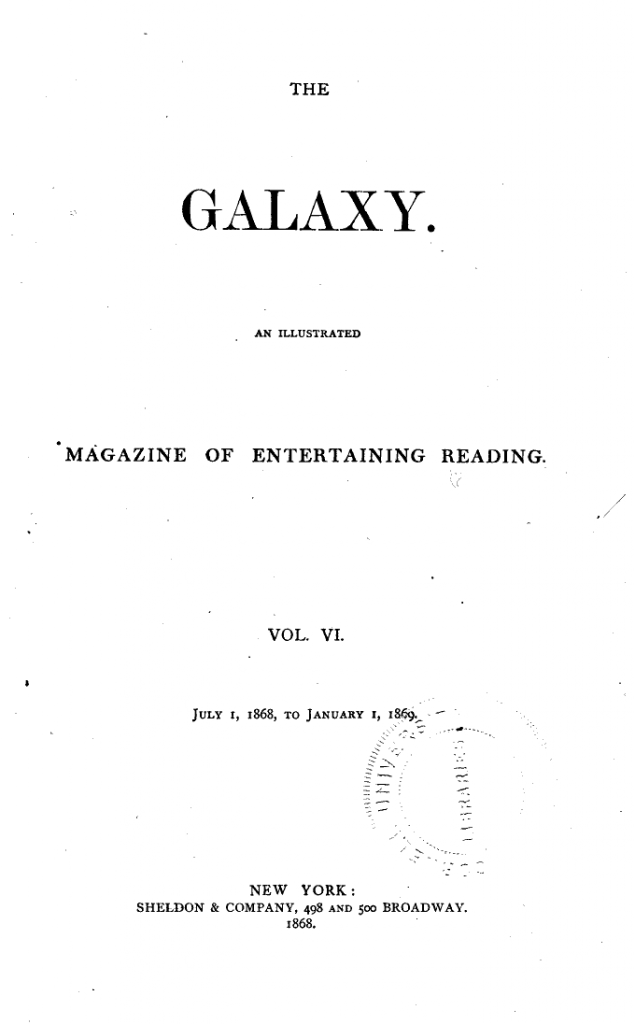 Image of the title page of the July 1868 issue of “The Galaxy” where “Aunt Penelope’s Girlhood” made its debut. Image Source: Google Books

“Aunt Penelope’s Girlhood” is a bildungsroman that tells the story of Penelope “Pen” Meredith, a one-hundred year old single woman who lives with her niece Janet in post-Civil War America. When Janet has a quarrel with her lover Paul, she seeks the advice of her wise aunt. What follows is a story that transcends the limits of history, giving a voice to single women of the nineteenth century and the independent spirit they injected into the nation.

Being that “Girlhood” is a bildungsroman, or a coming of age tale, the theme is about the consequences of freedom. Pen makes the bold choice to reject her lover Richard after learning he is betrothed to another woman. She could have simply ignored his engagement and married him, but she would have to live with the stigma of being a home wrecker for the rest of her life. So instead, she makes the decision to send Richard away, leaving her alone, but happy. At the end, she tells her niece Janet that she may have made the wrong decision. While she is happy, she still experiences loneliness and wonders how her life would have been if she married Richard.

This theme parallels America’s fight for independence during both the Revolution and the Civil War. In both conflicts, thousands of people were killed. The loss the Confederacy experienced was even more heartbreaking because they did not win the war.

This text was recovered by browsing through the database Making of America hosted by Cornell University. Though no real biographical information about Anna L. Johnson exists, a character sketch was created by combining data from old records.