The existence of a text like The Hermaphrodite proves that, in spite of the conservative view on identity politics in the 19th century, issues like gender identity, sexual orientation, and traditional gender roles were still being thought about and challenged. Julia Ward Howe choosing to keep The Hermaphrodite secret should come as no surprise to the modern reader, as portraying any Queer individual in a positive and humanizing light during her time (and even now) would have surely caused trouble. It is no secret that she was an open supporter of woman suffrage — a cornerstone of modern feminism — so Julia Ward Howe was no stranger to challenging the patriarchal power structures present in her time. But, The Hermaphrodite shows that she was willing to take the idea one step further, and challenge the ideas of gender and sex. 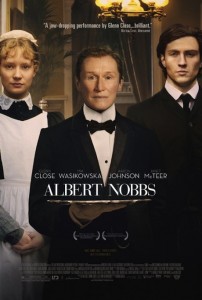 The recovery of The Hermaphrodite is historically significant to the genre of Queer literature. This text, and others, prove that ideas of Queerness and the social construction of gender are not new, and that traditional gender roles and the arbitrary nature of gender have been challenged throughout history. Not only do these types of texts give historical commentary, but they also contribute to the modern Queer community when revived.

In 1927, Irish novelist George Moore wrote the novella The Singular Life of Albert Nobbs, which tells of a woman who earns a position as a butler in a high society Dublin hotel by masquerading as a man; it was later adapted into a film starring Glenn Close as the titular character. Examples like this show how modern media gives new voices to older texts, and proves that there is still a desire for their stories in contemporary culture. Texts such as The Hermaphrodite and Albert Nobbs are important not only to gender nonconforming individuals, but to the Queer community as a whole — their portrayal of Queer characters in a positive light is proof that dreams of equality have existed throughout history.