The Hermaphrodite (The Novel) 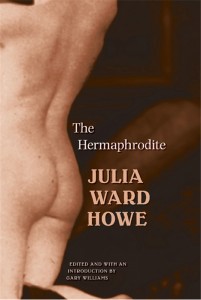 The Hermaphrodite, originally titled the Laurence Manuscript, was written by Julia Ward Howe around the mid 1840s. The text is an incomplete work, made up of three main sections and a few fragments, while missing its beginning, parts of its middle, and its end. The manuscript was never published in its time period and was only recovered more than a century later by Gary Williams. He edited the manuscript together and it was published in 2004 by the University of Nebraska Press.

The Hermaphrodite is best classified through three genres: the Romance, the Gothic, and the Bildungsroman. It uses spirituality and a focus on nature to disconnect the protagonist from society, while also using what were considered descriptions of perverse obsessions and impulses, scenes of violence, and terrifying images to tell the protagonist’s coming of age journey.

The text itself follows the life of Laurence, who was raised as a male but is ambiguously gendered in actuality. It comments on the struggles Laurence faces in interacting with society because of his androgyny. His personal relationships and inner turmoil over reconciling his male and female characteristics are the focus of the novel as he journeys from setting to setting. Themes of angelic and monstrous beings, asexuality, and spirituality weave throughout the text to define what it means for Laurence to be a hermaphrodite.