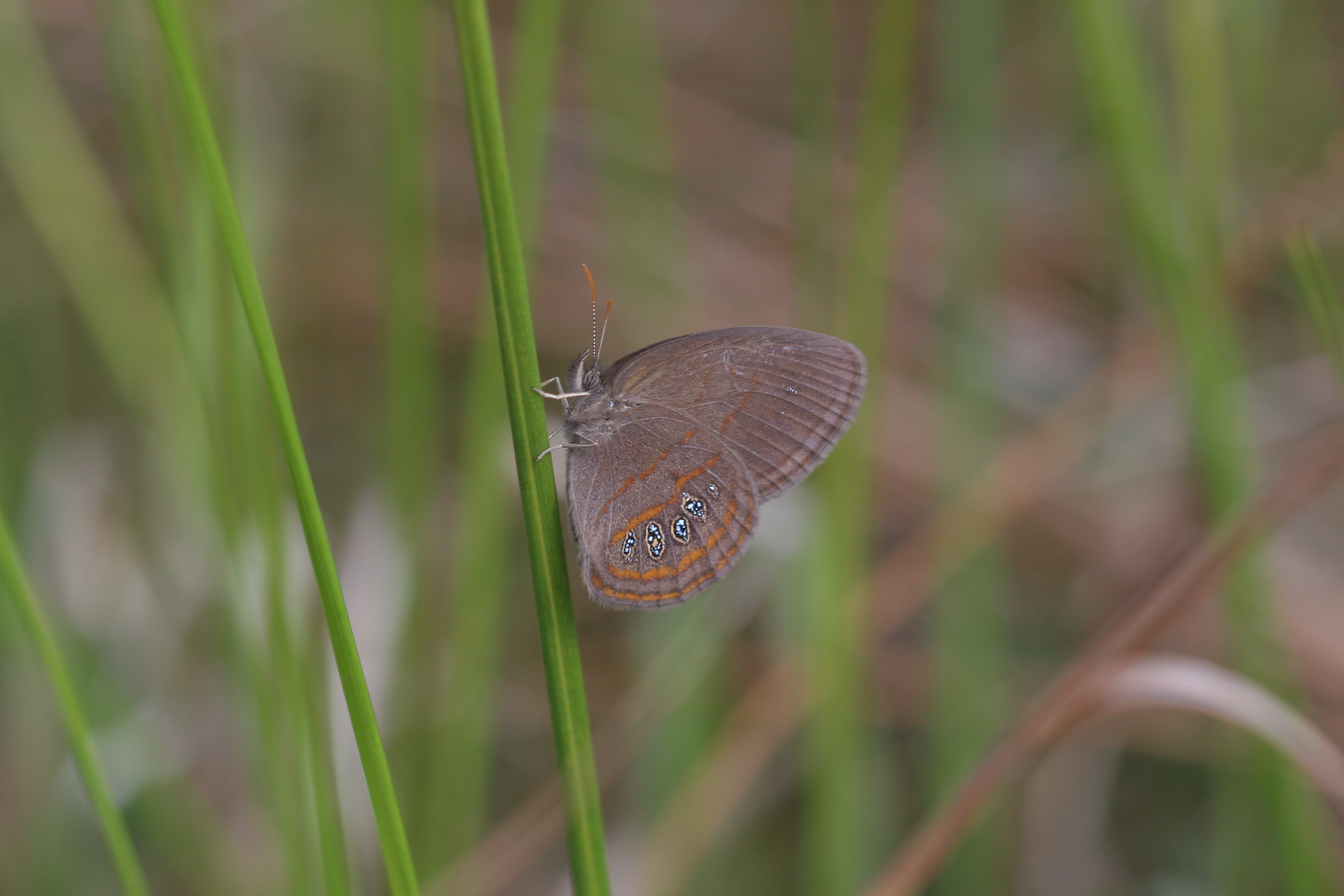 Dave Amadio journeyed back to Lakehurst yesterday for another try for Georgia satyr. and he managed to find four individuals of the beautiful, bog and savanna specialist.

That’s our 81st species for the year (see “Count at 80” post below, if you’d like to make your guess at what you think will be our final total for the year.)

Georgia satyr is at its northernmost limit at Lakehurst, and its New Jersey population is completely disjunct — separated by two hundred or more miles from the nearest colonies in southeast Virginia.

The NJ form, Neonympha areolata septentrionalis, shows some subtle differences from the southern form (but see footnote #2 below):

Shapiro notes that NJ individuals average larger than those from southern populations and have rounder wings.

Cech & Tudor report that NJ individuals generally show more prominent eyespots on the FW (just visible in Dave’s photo if you click once or twice to enlarge) and have more rounded eyespots in the HW “with no light flecks in the center.”

Gochfeld and Burger add that the genitalia of the southern form and NJ form differ (citing a study by Dale Schweitzer) and conclude that our population “is probably a separate species, the Lakehurst Satyr, Neonympha septentrionalis.”

If the population were recognized as a separate species, the Lakehurst satyr would become New Jersey’s only endemic butterfly.

Footnote 1: Stockton’s library data base enabled a track back to the original description of the Lakehurst form.

The description of the population first appears in a 1924 article by William T. Davis,  “A northern form of the butterfly Neonympha areolatus” in the Journal of the New York Entomological Society.

After describing Georgia satyr plates in several 19th century books, Davis writes, “Many years ago [I] observed that numerous specimens… that [I] collected at Lakehurst, New Jersey, had the eye-like spots on the underside of the hind wings rounder than in specimens coming from Florida and the south in general….According to [my] observation, northern specimens [also] have the outer margin of the fore wing somewhat more rounded or curved than in those from the south.”

He concluded, “The northern specimens appear therefore separable as a variety or race from the southern ones, and the name septentrionalis is here proposed for it.”

In brief, Gatrelle argues that the form Davis called “septentrionalis” is actually the original, first-described form of Georgia satyr, named by the German entomologist Jacob Hubner based on a painting by John Henry Abbot in 1806. Hubner’s name for the species was Oreas fimbriata helicta. Gatrelle observed that this form (with rounder spots on the HW, etc) flies not only in New Jersey but also in South Carolina and elsewhere in the southeast. In Gatrelle’s view (if I understand it correctly): “septentrionalis” = “helicta.”

Gatrelle believed the other population — the source of Davis’s southern specimens — is less clearly recognized as a separate species. He describes some subtle differences between N. septentrionalis/helicta and N. aerolatus (including flight behavior and habitat differences as well as field marks). He proposes two species, Neonympha helicta (which would include our NJ population and similar populations in the south) and Neonympha aerolatus and argues that John Abbot recognized these differences in his original field work in South Carolina in the first decade of the 19th century!

Gatrelle writes, “First, the Abbot depiction of the species named helicta by Hübner is a more accurate depiction of septentrionalis than areolatus (especially in the male). Second, workers should have placed more confidence in Abbot’s skills as a naturalist. Abbot was a keen observer who knew what he was doing. While we today have had difficulty, in some cases, figuring out what Abbot had [because his specimens have been lost and we have only his paintings], he surely knew that his helicta and areolatus were two species.”

Whew! I don’t know if anyone is reading all the way through this, but if you want to dive even deeper into this complexity, you can go to two current websites that endorse Gatrelle’s analysis and provide photos and fieldmarks to distinguish the Helicta satyr from the Georgia Satyr where they both fly in the Carolinas:

This entry was posted in First Emergences, Nymphalids. Bookmark the permalink.