The permanent website of the South Jersey Culture & History Center at Stockton University has moved to the following address: stockton.edu/sjchc/.

This site (our blog) will stick around for a while, but all new information will be found on our Facebook page or the new website.

Posted in Announcements | Comments Off on SJCHC has moved! 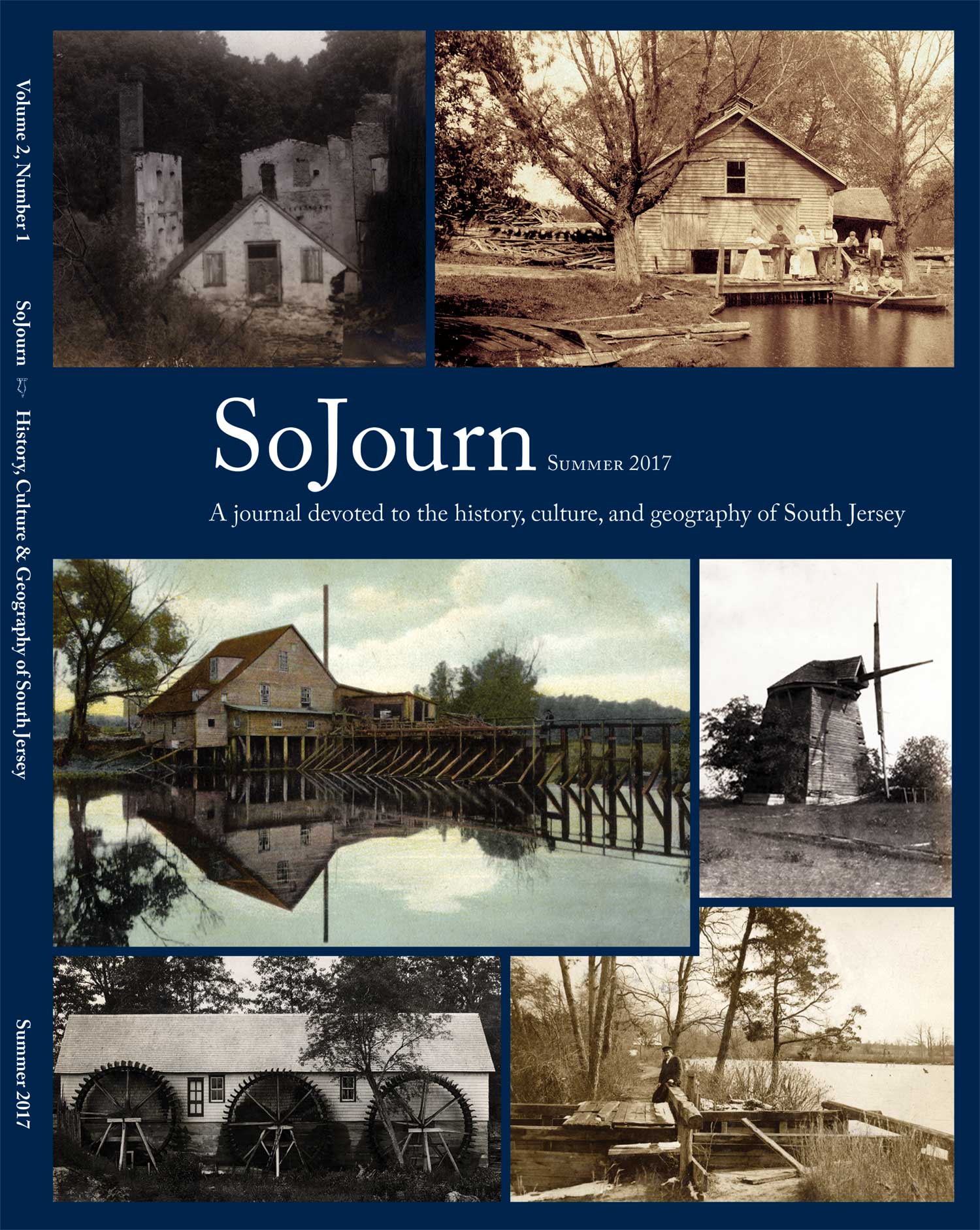 SoJourn 2.1, the third issue of South Jersey history, culture, and geography has arrived from the printers (about a week sooner than we anticipated). You can purchase it from the Stockton University Bookstore, the AtlantiCare Regional Hospital gift shop, Second Time Books in Mt. Laurel (as soon as we can have them delivered), and Amazon or by contacting me, Tom Kinsella, or Paul W. Schopp.

The Articles in this issue:

“Proving a Legend: A Submarine in the Rancocas Creek” by Alice Smith

“Off Course in a Raging Sea: Captain William M. Phillips and the Plight of the Schooner BENJAMIN E. VALENTINE” by Paul W. Schopp with Anthony Ficcaglia

“Haul Away, Boys!” [Pictorial essay on Shad on the Delaware]

“The Publications of R. Marilyn Schmidt”

“Anecdotes and Memoirs of William Boen”

We hope you will find this issue both entertaining and informative.

Posted in Announcements, Publications | Comments Off on SoJourn 2.1 has arrived

12th Annual Lines on the Pines

Lines on the Pines is a celebration of the New Jersey Pine barrens that brings together authors, artists, craftspeople, historians and the local community — anyone interested in the Pines. This year (as last) it will be at Renault Winery in Egg Harbor City.

Be sure to check out their Facebook to keep up to date with some of the day’s events. 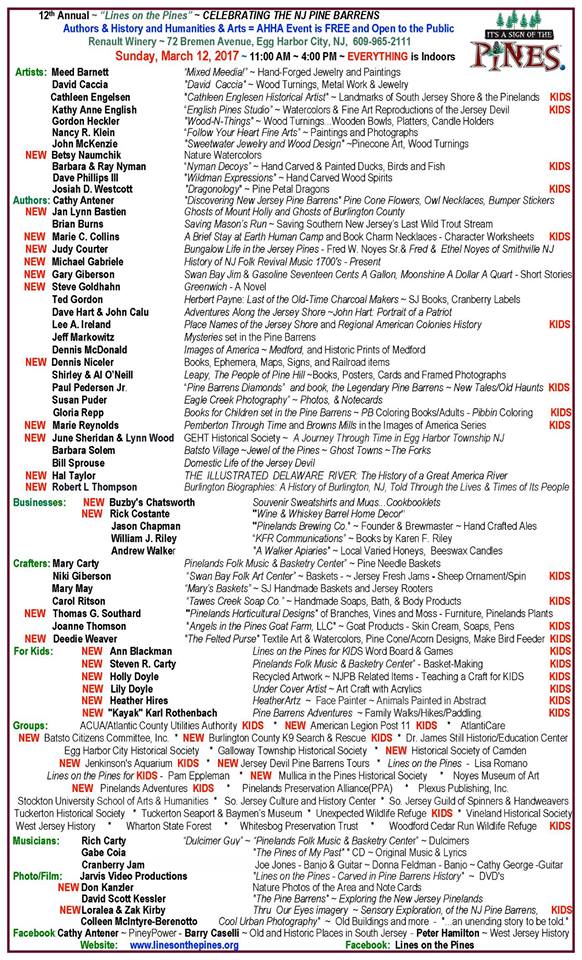 The South Jersey Culture & History Center at Stockton is proud to announce the second issue of SoJourn, a journal devoted to the history, culture, and geography of South Jersey.

Copies are available at the Stockton Campus Center Bookstore, Second Time Books in Mt. Laurel, the AtlantiCare Regional Medical Center gift shop, and Amazon (or by contacting me, Tom Kinsella). 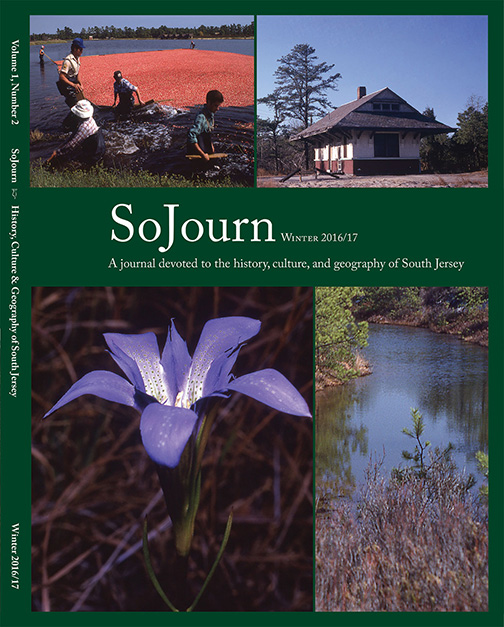 Contents of this issue:

“Kate Aylesford: Modernity and Place in New Jersey’s Pine Barrens” by Matthew G. Hatvany
A reconsideration of one of the first historical romances based upon events in South Jersey, describing the Battle of Chestnut Neck and Revolutionary era Batsto and Sweetwater.

“Alfred and Muriel: The Story of the J. A. Sweeton House in Cherry Hill, New Jersey” by Brian Stolz as told by Jim Stanton
How South Jersey came to have its one and only Frank Lloyd Wright designed house.

“Where Blackberries Grew: Margaret Mead in Hammonton” by Patricia Chappine and Mark Demitroff
The story of Margaret Mead’s connection to Hammonton, New Jersey.

“A Day on the Bay with Waterman Phil Andersen” by Susan Allen
A stunning photo essay chronicling a day with two local crabbers.

“South Jersey Fruit Picking Tickets” by Richard Watson
All you ever wanted to know about picker tickets and their use by South Jersey farmers.

“Manufacturing from Menhaden: A History in the Mullica Valley” by Kenneth W. Able
The development and decline of the menhaden industry on and near the Mullica River.

“Reimagining a Remnant of the Past at Stockton” by James Pullaro and Paul W. Schopp
An artistic interpretation of the sawmill erected on what is now Stockton’s Lake Fred in 1815.

Posted in Announcements, Publications | Comments Off on SoJourn is here!

SoJourn 1.2 is at the printers

The second issue of SoJourn, the journal of South Jersey history, culture, and geography, is at the printers. I imagine we will have copies for sale at the beginning of next week. 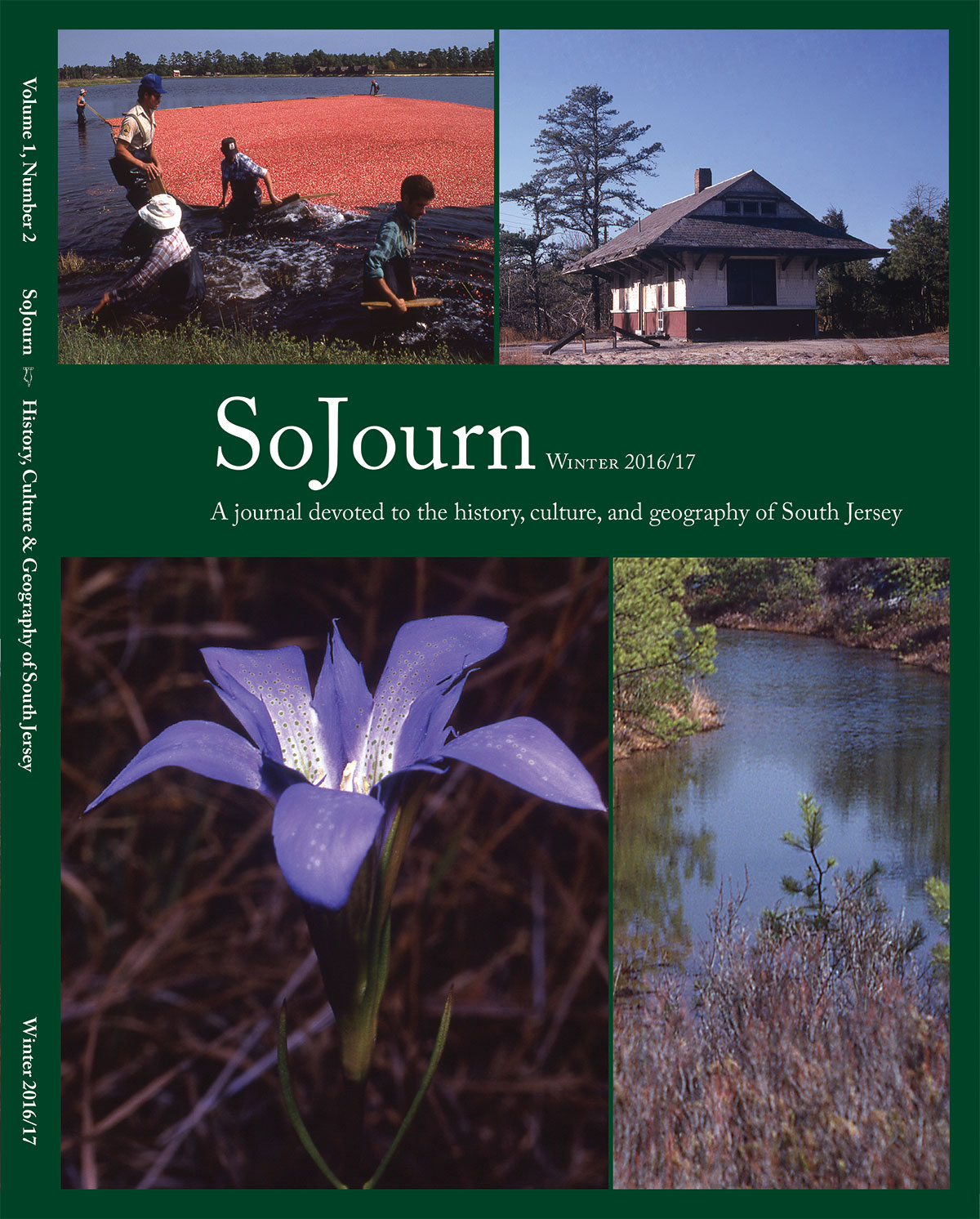 Posted in Announcements | Comments Off on SoJourn 1.2 is at the printers 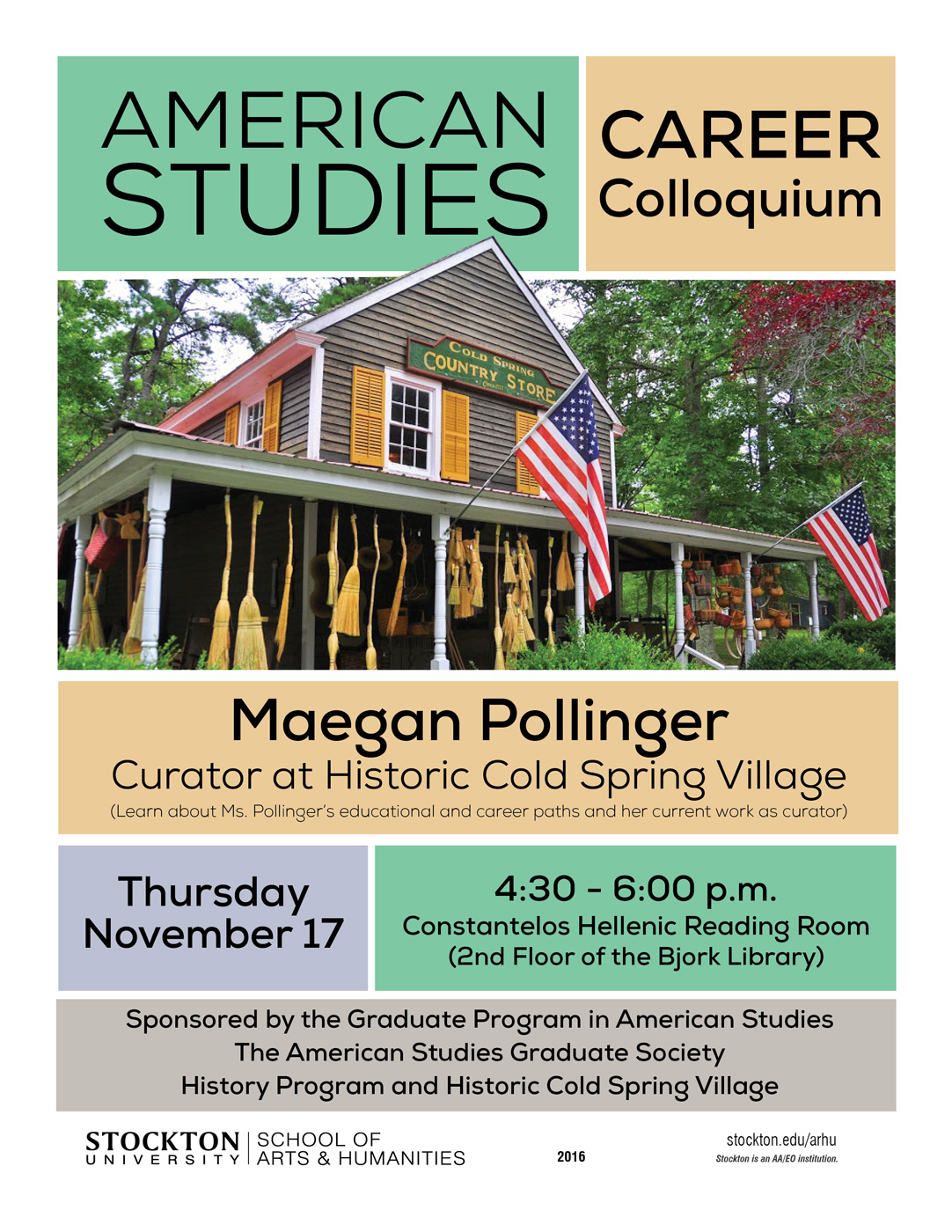 Burlington Biographies: A History of Burlington, New Jersey, Told Through the Lives and Times of its People, by Robert L. Thompson, has arrived from the printers. 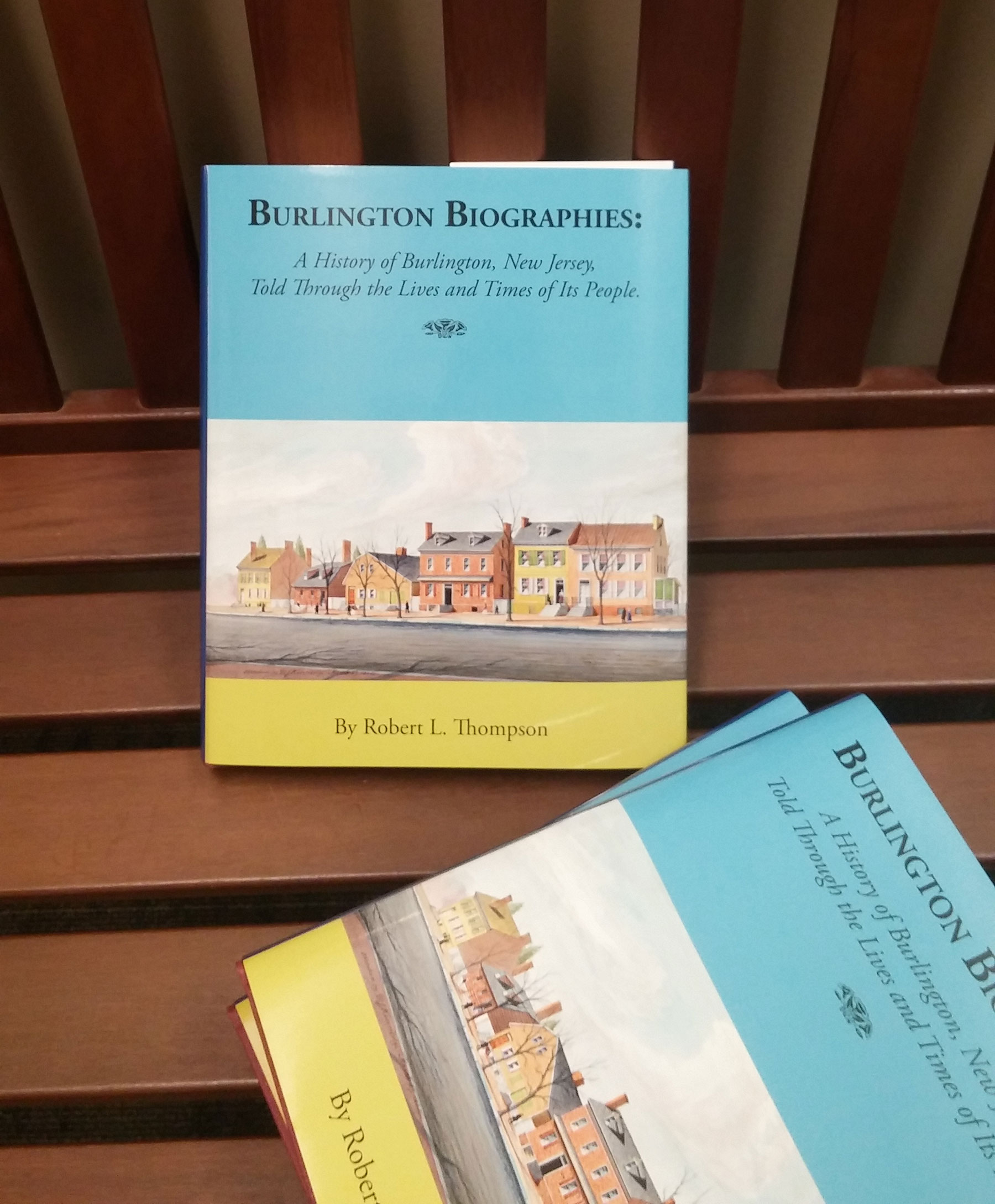 At 552 pages, this hardcover study of the city of Burlington, New Jersey, is a well-researched and entertaining introduction to the city’s rich and long history.

Posted in Announcements, Publications | Comments Off on Burlington Biographies has arrived 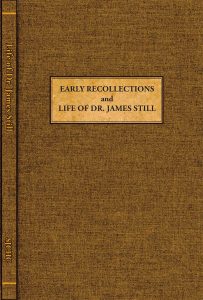 During the nineteenth century, James Still was perhaps
the most gifted physician in South Jersey. He
was also African American, the son of former slaves,
who received no more than six months of traditional
schooling, and was self taught in both medical knowledge
and practice. Born in Washington Township,
Burlington County, New Jersey (now Shamong), Dr.
Still overcame poverty and racial animus to become
one of the wealthiest men in South Jersey during his
lifetime. This republication of his outstanding autobiography,
self-published in 1877, is a stirring reminder
of the power of self determination and faith.

This new edition of Early Recollections is not a facsimile
reproduction but is newly typeset with foreword by
Samuel C. Still III and introduction by Paul W. Schopp.
Includes a new and enlarged index.

Republished in 2015 by the South Jersey Culture &
History Center. Available on Amazon and by
contacting SJCHC.

Posted in Announcements, Publications | Comments Off on Early Recollections and Life of Dr. James Still 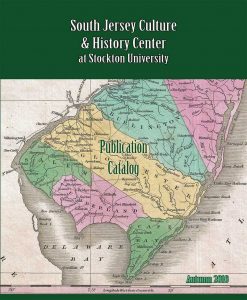 To read and download the most recent catalogue of SJCHC publications, click on the catalog cover (3.6 meg).

Posted in Announcements | Comments Off on Sales Catalog, Fall 2016

The 2015-2016 annual report for the South Jersey Culture & History Center is out. 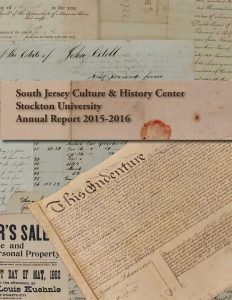 You can read and download a 6.5 meg pdf of the report by clicking on the cover image.