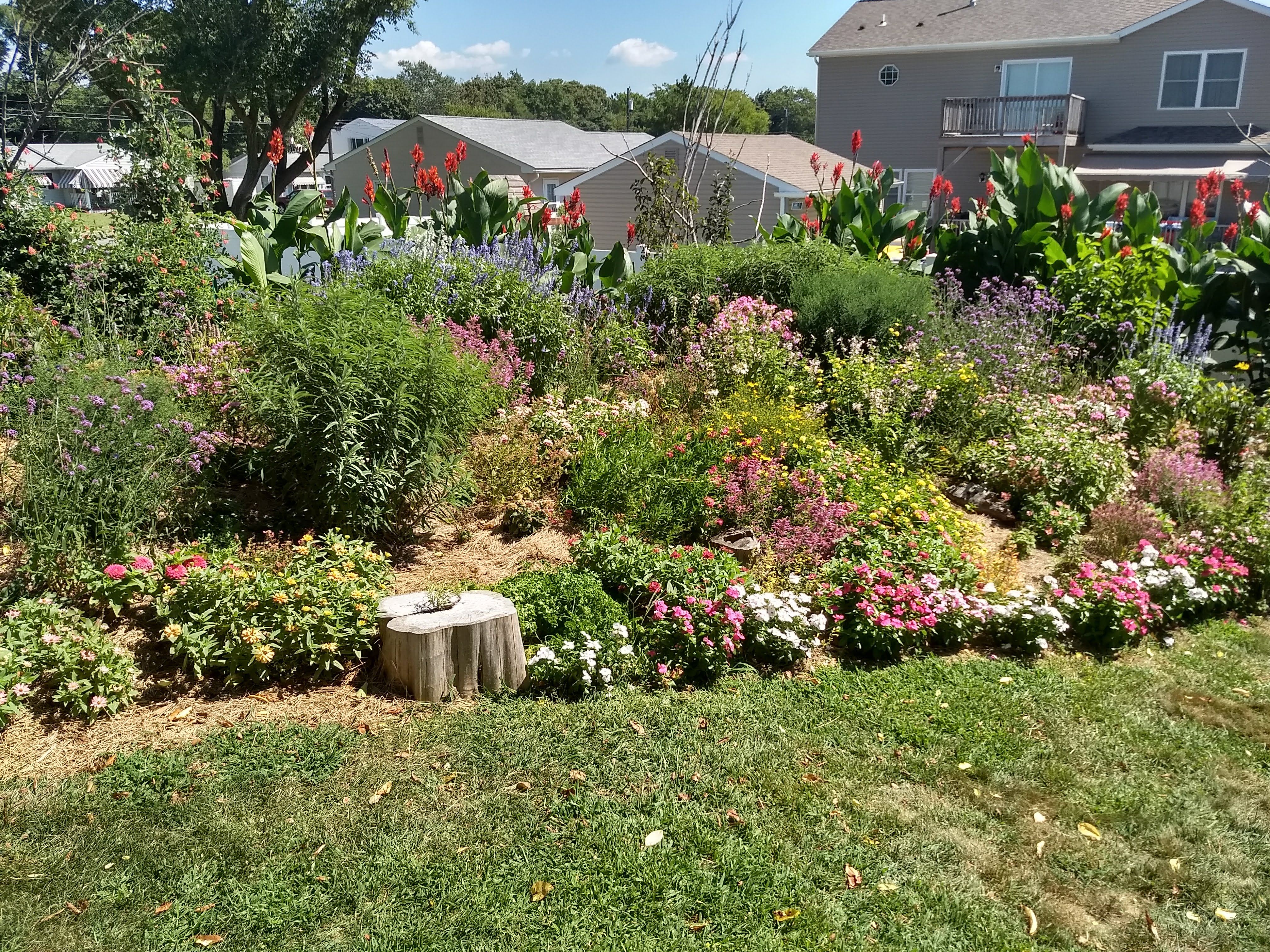 Cannas in one section of Beth Polvino’s backyard.

Beth Polvino has tracked and photographed the entire sequence of Brazilian skippers in her garden in North Cape May this year: from eggs to adults (still continuing).

Until this year the species was not known to breed in NJ. Thanks to Beth and other sharp observers (and a never-before-seen irruption), that story has changed this year!

The Brazilian Skipper is a butterfly that rarely strays north to NJ from its homeland in the southern US.  Before 2018 the South Jersey Butterfly Sightings log had fewer than a dozen sightings recorded in the last ten years.  Only once before had I seen the species in my garden in North Cape May — on August 14th and 15th in 2017.

It’s been a different story this  year.  One or two individuals were seen in Cape May in late May, at spots about two miles apart, and we have had many reports since, especially from the Cape May peninsula.

The first Brazilian I found in my yard this year appeared on August 10th — with the first caterpillars seen about a week later.  I soon found eggs and was able to document the entire sequence from eggs to caterpillars to chrysalises to the successful eclosure of an adult on Sept 7, 2018.

Each caterpillar consumes a lot of Canna on its route to adulthood, and the species is considered a pest by many gardeners in the South. 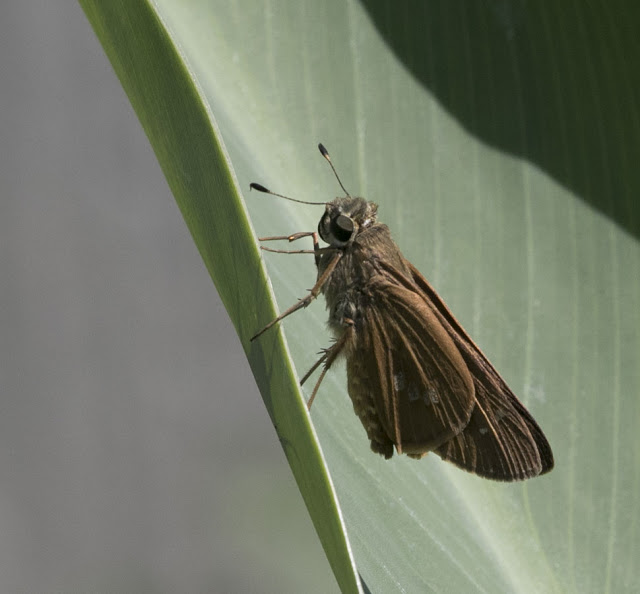 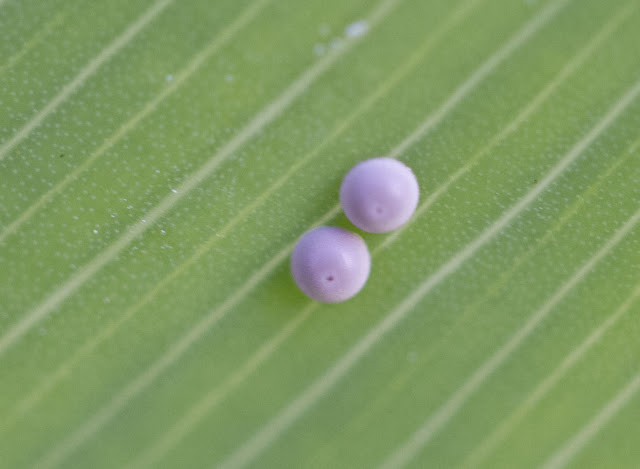 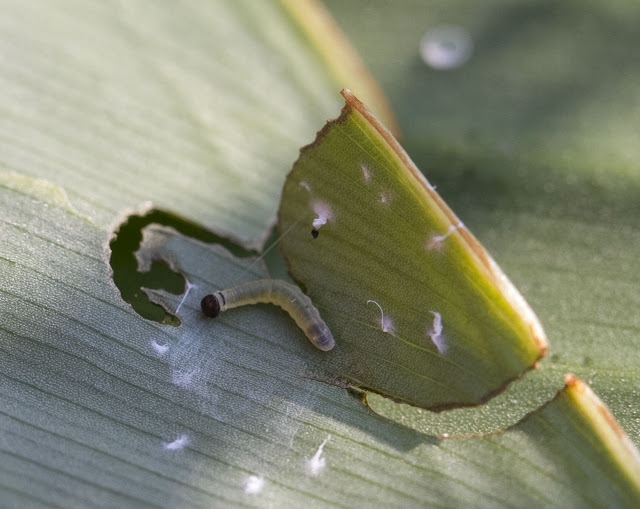 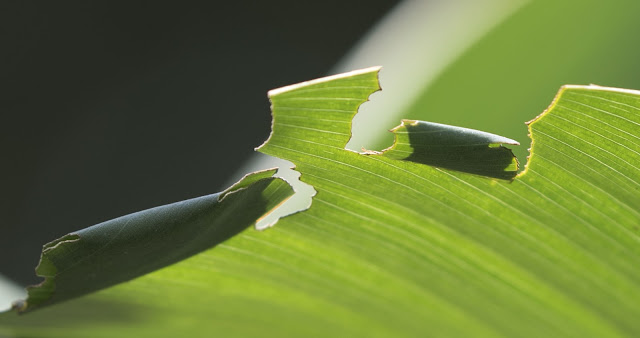 Nests they use during the daytime. They feed at night. (B. Polvino) 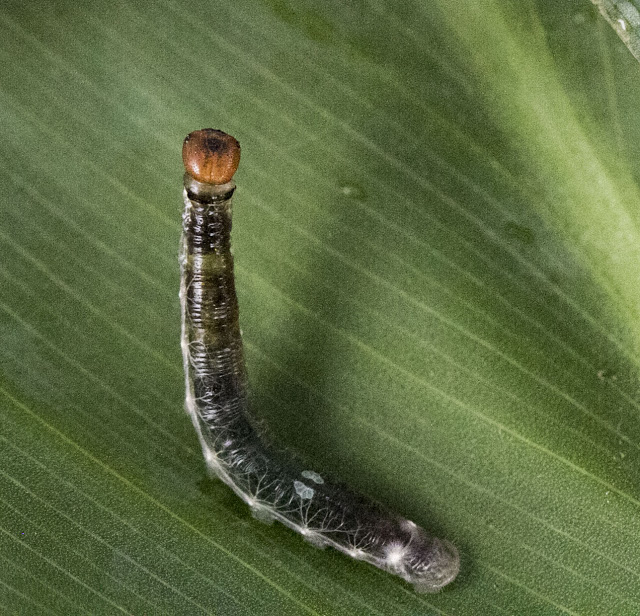 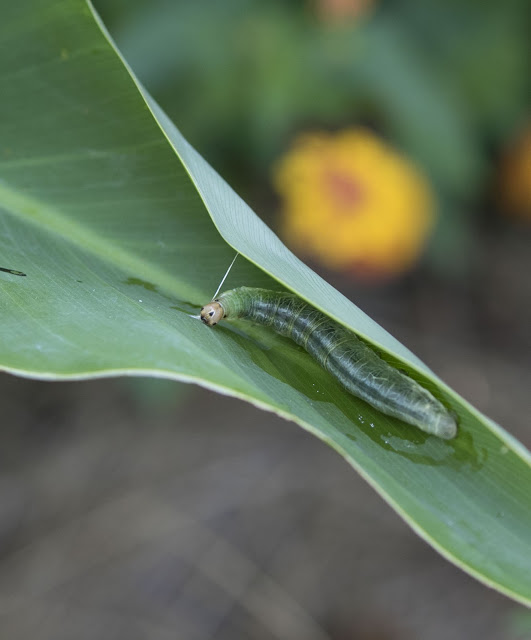 Caterpillar creating its nest for the coming night. (B. Polvino) 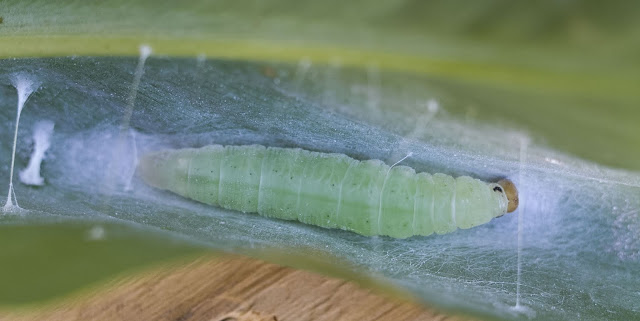 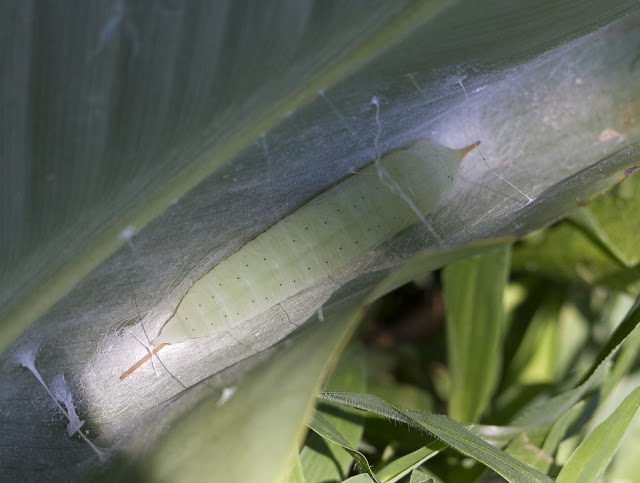 Emergence should be soon now, as chrysalis has changed colors. 9-6-18. (B. Polvino). 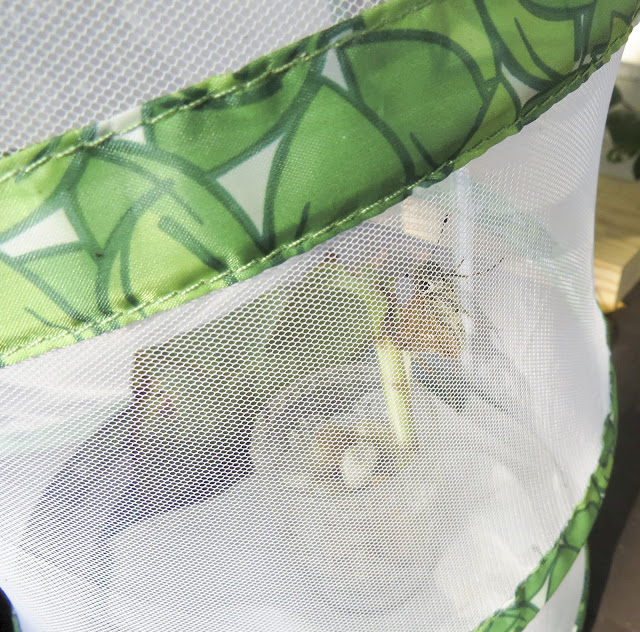 Early the next morning, 9-7-18, the adult emerged inside the protective enclosure where I keep the cats and chrysalises. (B. Polvino). 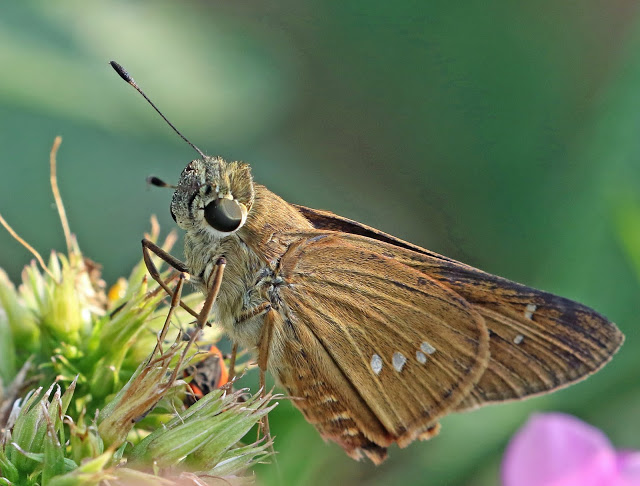 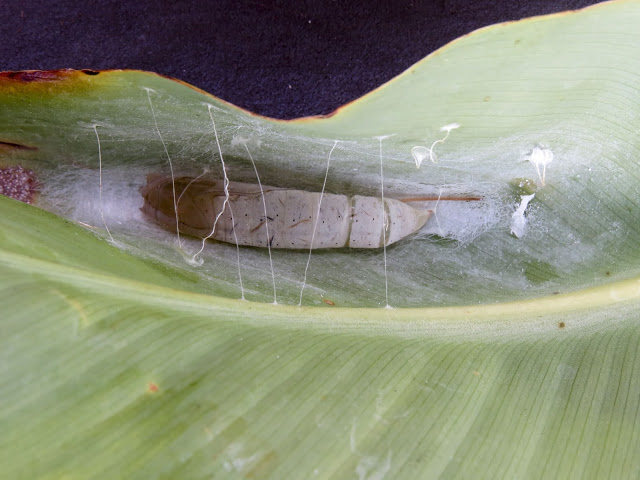 The spent chrysalis. (B. Polvino).

Beth originally posted this sequence on her own blog on September 7.

For events in her garden and other more recent reports of Brazilians in the week since, see our Sightings Log’s reports of the species here (up to September 17):

Beth’s own blog is here: 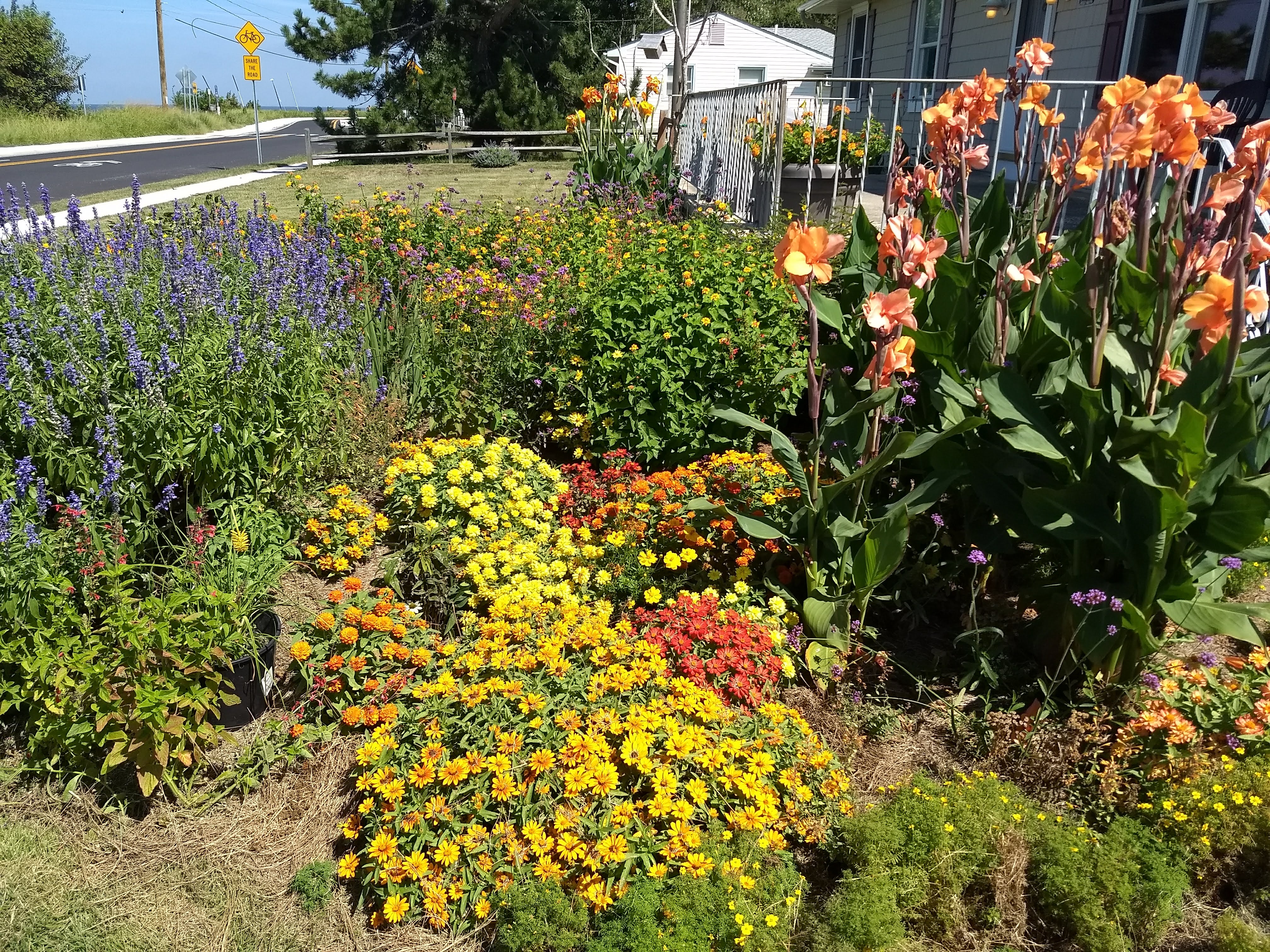 Beth’s front yard looks over the Delaware Bay — and her garden has attracted many Bay-crossing butterflies over the years. (Photo J. Connor)