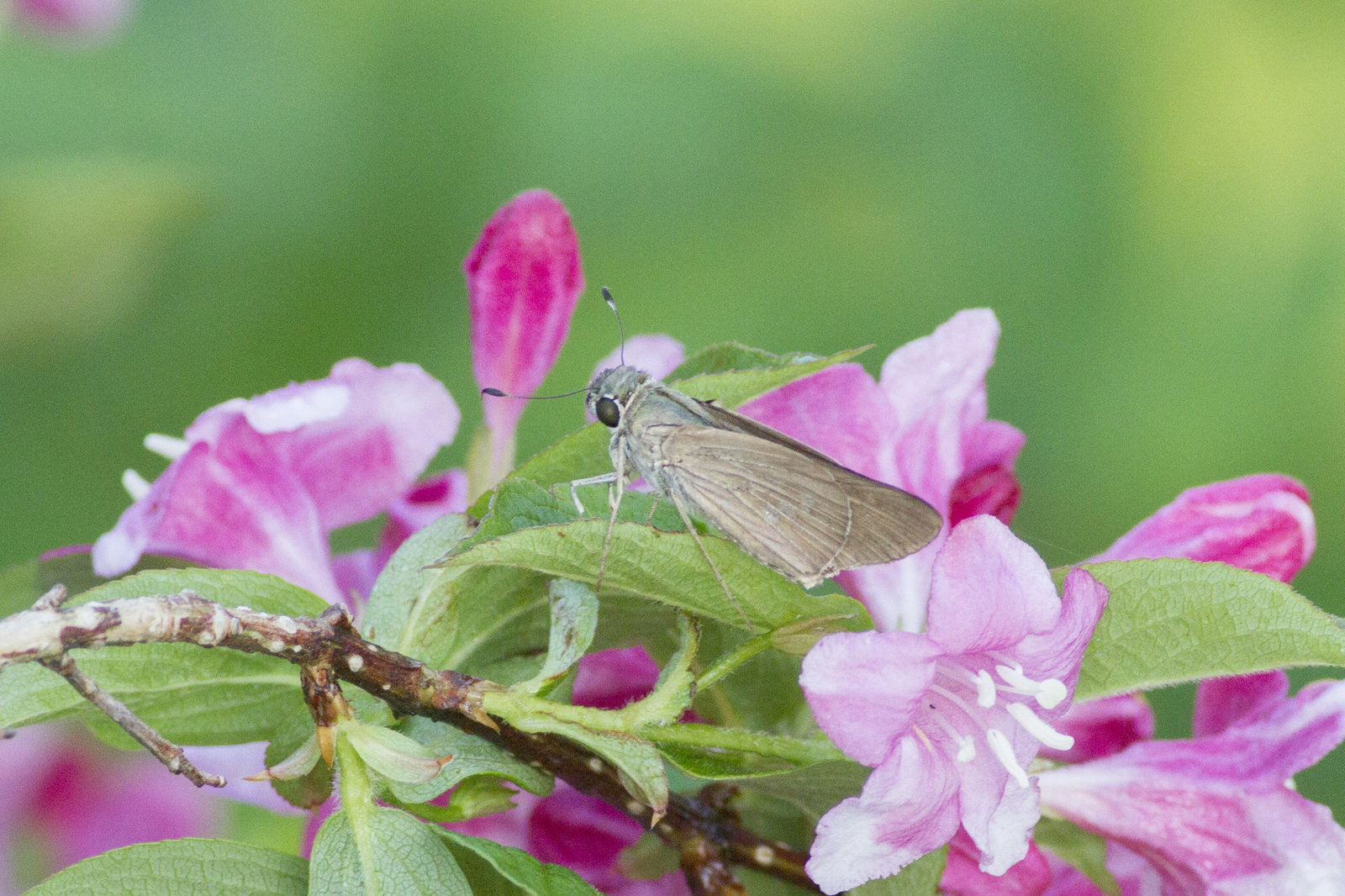 Brazilian skipper at Cape May Point Hawkwatch photo’d by Sam Galick, May 20, 2018.

We now have two mind-boggling reports of a Brazilian skipper in Cape May this spring:  the first by Sam Galick on the Cape May Point Hawkwatch Platform on Sunday, May 20; the second by Teresa Knipper in her garden in Cape May City yesterday, Sunday, May 27.

May 20 Report from Sam Galick

May 27 Report from Teresa Knipper

It was gloomy and wet through much of South Jersey yesterday, but Teresa reports that Cape May City did not get rain until late in the day. She found the skipper in mid-afternoon, a couple of hours before the rain, while walking in her yard with her grandson.

“At one point in the afternoon you could feel the winds shift so they came out of the south and a hot, humid day turned into cool and breezy. It was right after the winds shifted — about 3 PM – when an enormous skipper landed right in front of us!  It had a very long and striped proboscis and [nectared in] the pink evening-primrose.  Pretty nice for the first skipper of the year in the garden!”

Teresa’s yard is approximately two miles east of the Hawkwatch Platform, and seven days passed between Sam’s find and hers, but her garden visitor was likely the same individual Sam had seen earlier.  It is hard to imagine a second individual appearing in the same general area in May, an apparently-unprecedented time of year.   One spring stray from the deepest South is amazing enough!

A quick, unscientific review of Internet sites and some published sources suggests spring records of Brazilian skipper in the northeast (or anywhere else north of Georgia) are extremely few.

I have so far found no other spring records of the species in NJ, Delaware, or Pennsylvania.

There are a few old records from NJ listed with little detail by Art Shapiro in his Butterflies of the Delaware Valley (1966).   He names three specimens coming from three sites (one from Salem in SAL, and the other two from CAM: Mt Ephraim and Camden city).  He adds, “There are several records from Delaware and Cape May County, NJ,” but does not list them – or the dates.  He lists August and September as the months when the species might be hoped for.

Gochfeld and Burger in their Butterflies Of New Jersey (1997) note Shapiro’s summary and add that the species “apparently bred on Long Island in 1911,” as reported by William P. Comstock in his Butterflies of New Jersey (published in 1940).

James Monroe and David Wright in their new and excellent Butterflies of Pennsylvania (2017) list two records for that state:  one from 9-1-2012 in Northampton County and one older, undated record from Delaware County.

I surfed the Internet for spring records of the species north of the Gulf Coast states and came up with little to report.  Bug Guide has only a dozen records of the species before July, and most are from Florida and Texas — with two from Alabama, and one each from Mississippi and Louisiana.  BAMONA features the following map of reports with no spring records north of the Gulf Coast states (if I am reading the map correctly).

The single spring record of an adult north of the Gulf States that I’ve found so far is from North Carolina:  the Butterflies of North Carolina database lists 21 reports of Brazilian skipper for the state with a single report before July.  That is of an individual photographed at the Raulston Arboretum in Raleigh on May 30, 2012 by R. Stickney.

A couple of other interesting notes from the Internet.

According to the University of Florida Entomology & Nematology website:

“In southern Florida, [adult Brazilian skippers] are usually first noticed in May with a second generation of adults appearing in early June. It is not known how many generations per year occur in Florida but adults have been collected in all months of the year (Kimball 1965) and all larval stages have been collected in January. It is thought that Calpodes ethlius can only overwinter in the very southernmost region of Florida and must recolonize more northern regions each year (Moore 1928).”

That bit of information makes an intriguing connection with details from the Alabama Butterfly Atlas.  That site reports, “The Brazilian Skipper is not common in Alabama, having been documented in only a few counties.”  Scroll down the graph of occurrences at the link below.  The atlas has compiled twenty-five reports for May, all along the coast (and none in June anywhere in the state), which suggests that those coastal flyers are likely first-brood wanderers from Florida – just as our Cape May visitor could be.

As many sources note, Brazilian skipper is a strong flyer:  it has colonized the Galapagos Islands and has been recorded at Point Pelee, Ontario (September 21, 1991).  A flight northbound for more than a thousand miles from the population centers in southern Florida to NJ seems extremely unlikely but not off-the-charts incredible.

Could this one occurrence foreshadow others to come later this year?  Let’s hope so.

Most of our NJ observers who have managed to see the species in the state have noted that the species is an easy ID:  the fast flight, the big body, the big head, the long Ocola-like forewings, the tell-tale spots on the underside of hindwings.  Teresa’s photo below  captures the pattern of white “hyaline” spots on the upper-side of the forewings, which also look distinctive. 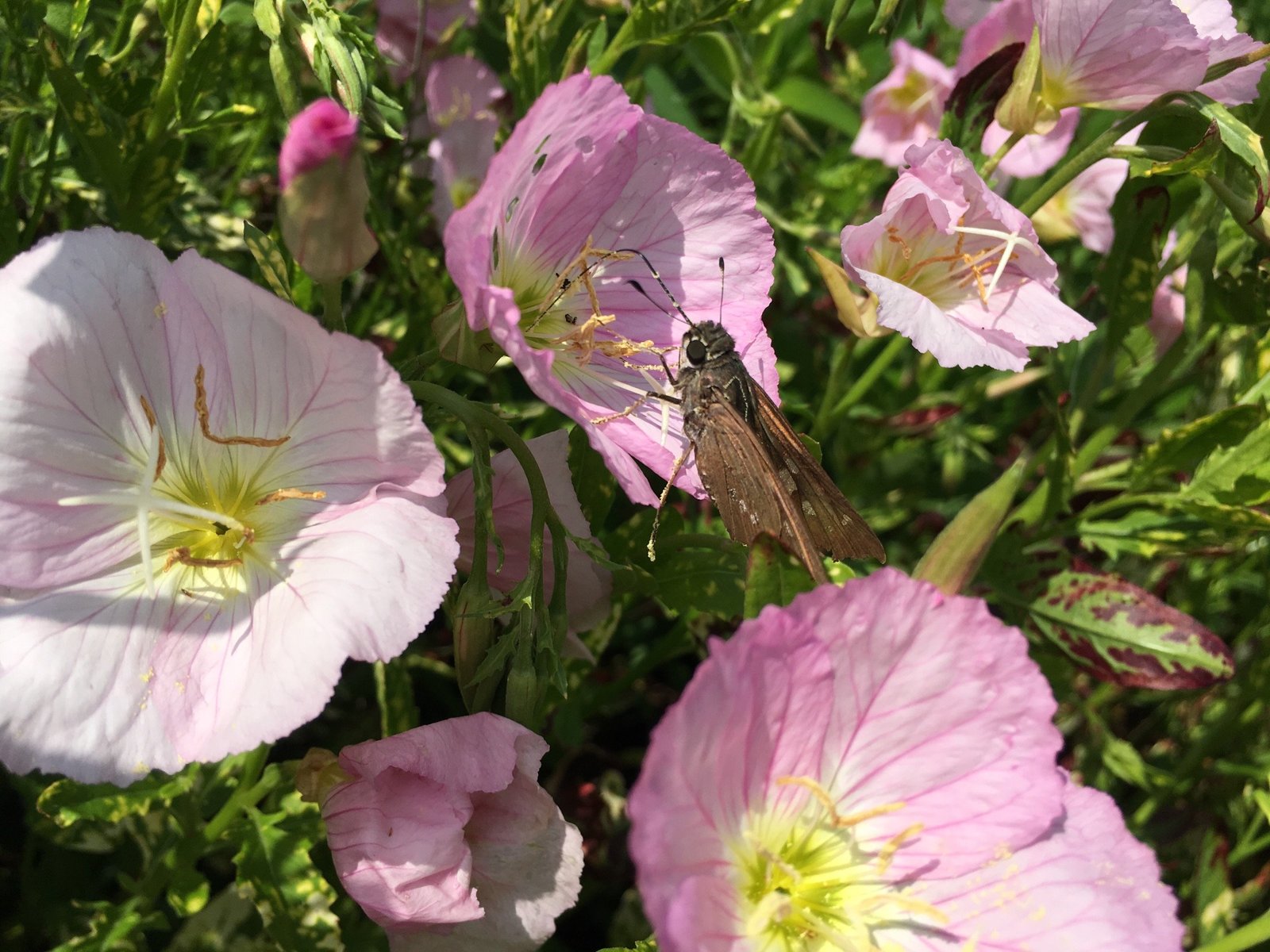 Brazilian skipper photo’d by Teresa Knipper in her garden in Cape May City, May 27, 2018.

Stay alert, everyone – and good luck in the field!

PS:  If anyone knows of other spring records in the  northeastern states, please pass along!

This entry was posted in Early Dates, ID Challenges & Tips, Looking At Our Data, Skippers. Bookmark the permalink.