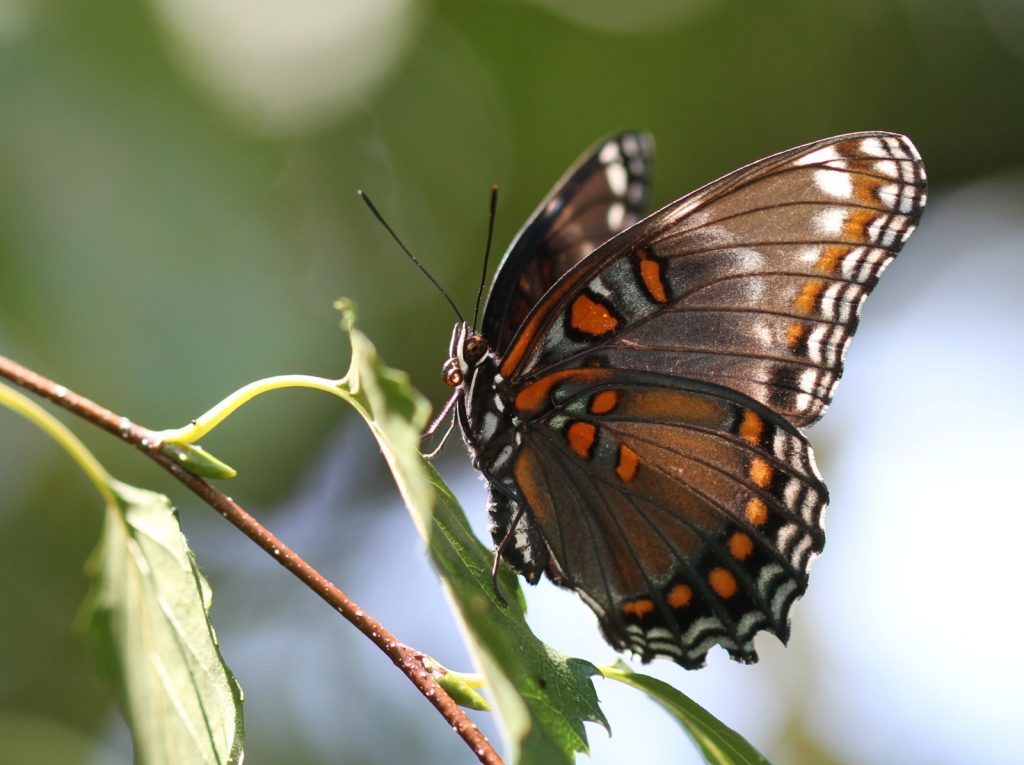 August 2016 was a good month for red-spotted purples in South Jersey, and Dave Amadio found one in his garden in West Deptford, GLO, showing signs of the white band more often seen in its close relative, the white admiral.

August 2016 seemed a good month for butterflies and butterfly observers in South Jersey, despite the heat and general lack of rain. We compiled our highest total of reports this year (460+) and observers (40), and we documented 64 species flying during the month, including several rarities.

Forty observers contributed to the log during the month, our best total of the year so far. Thanks to each of you — and a special welcome and thanks to our newest participants (listed in bold).

Reported in July, but not in August

Six or seven species (depending on whether we count southern broken-dash) apparently ended their 2016 flights in July. Two others – meadow fritillary and mourning cloak – seem between broods at the moment, with no reports in August but re-emergence expected in September.

(Update: while I drafted this post, Dave Amadio found our first September meadow fritillary — on 9-2-16.)

At least two or three observers searched through old photos for overlooked/mis-ID’d/possible southern broken- dash photos from past years without success. Anyone with photos of northern broken-dash from previous years — or even this year — might want to browse the collection. Any of those NBDs looking a little redder than you might expect? You could make a wonderful discovery.

I wrote to some NABA count compilers in Maryland and Delaware asking their sense of the status of southern broken-dash in their local areas. The first to reply was Rick Cheicante who compiles the Harford County (MD) count — in and around Bel Air, northwest of Baltimore.

“Southern Broken-Dash (SBD) — Much rarer [than Northern Broken-dash] and very uncommon up to just a few years ago on the coastal plain of both the eastern and western MD shores. However, more recently, there seems to be much greater observation of SBD in southern MD, MD’s eastern shore and along the lower edge of the piedmont. Furthermore, some of the sighting numbers are hitting double-digits. My suspicion is this is the next species undergoing a northernly range expansion, following, in my opinion, what Red-banded Hairstreak and Fiery Skipper have done over the last couple of decades. I do have a Harford County record in late July from a few years ago, and was present for the first record in Kent County in the time frame a few years prior to that.

“I saw the pics on the blog, and I think everything you are reporting and/or suggesting are spot on. The pics of SBD look like classic SBD to me. The ventral ground colors are as written – SBD orange/brown with the different fringes. NBD brown with similar fringes. That said, I have seen many SBD in the Carolinas, FL and TX where fringe color difference was not at all obvious (or just not different). That is very confusing, but the ventral base color is always what you would expect it to be.”

Discovery of the Month?

We had a number of wonderful finds in August — some detailed in the Photo Gallery below — but perhaps the most exciting of all was Brian Johnson’s discovery of a second brood of Georgia satyrs flying during the month.

Most sources list New Jersey’s race of Georgia satyrs as a single-brooded population that flies June-July (e.g. Shapiro [1966], Glassberg [1999], and Cech & Tudor [2005]). The only reference I can find to a second brood in NJ is in Gochfeld and Burger Butterflies of New Jersey [1997] where the authors note, “Usually one brood late June to mid-July at Lakehurst, but two broods reported (June and August) at Fort Dix (Schweitzer). The geographic pattern and ecologic correlates of this variation remain to be investigated.” The reference is to New Jersey’s best-known professional lepidopterist Dale Schweitzer, of course. It seems that this second brood at Fort Dix was reported by Schweitzer in 1987.

Do any readers of this blog know of any other information of a second brood of this rarity in New Jersey?

September is a good month to appreciate butterfly migration in South Jersey, going in two directions.

And how about painted ladies? Can they magically appear on migration southward in a year when so far we have only two reports of the species (both solo individuals)?

Cloudless sulphurs are having a good year already and they sometimes peak in September as more and more cross northward into NJ, so that should be fun to look for over the next 30 days. We have had several reports of ovipositing by them (and some photos of eggs — see below.) Keep your eyes out for cats, everyone!

Little yellows have been found in numbers in CMY Co since July — with just a single sighting in ATL and an amazing find of one in Sussex County on July 22 (on the North Jersey Butterfly Log.) Can we hope for more of these “wrong-way” migrants moving north?

Fiery skippers have been recorded in South Jersey so far only in two counties at diametrically-opposite corners of our area:  CMY (with multiple sightings) and BUR (three reports). Can we fill in some of the blanks in between over the next few weeks?

So far we have had only a single Ocola skipper report — in Mantua, GLO (see photo below). Meanwhile, North Jersey has recorded four! If their migration goes at it usually does, we should find at least a few more.

Finally, we can always be on the lookout for September or October surprises — long-tailed skipper? Brazilian skipper? Something even farther over the charts?? 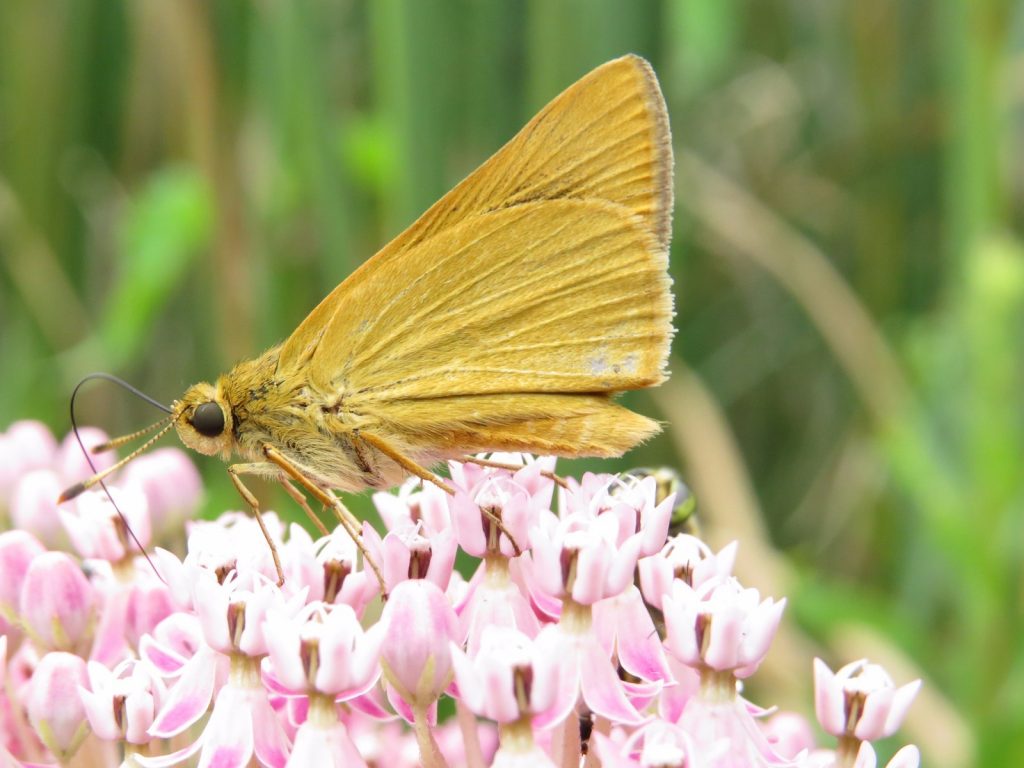 Our rare skipper reports spanned exactly one month, from July 1 to August 1, when Tom Bailey found this one on 8/1/16 in Elsinboro, SAL. 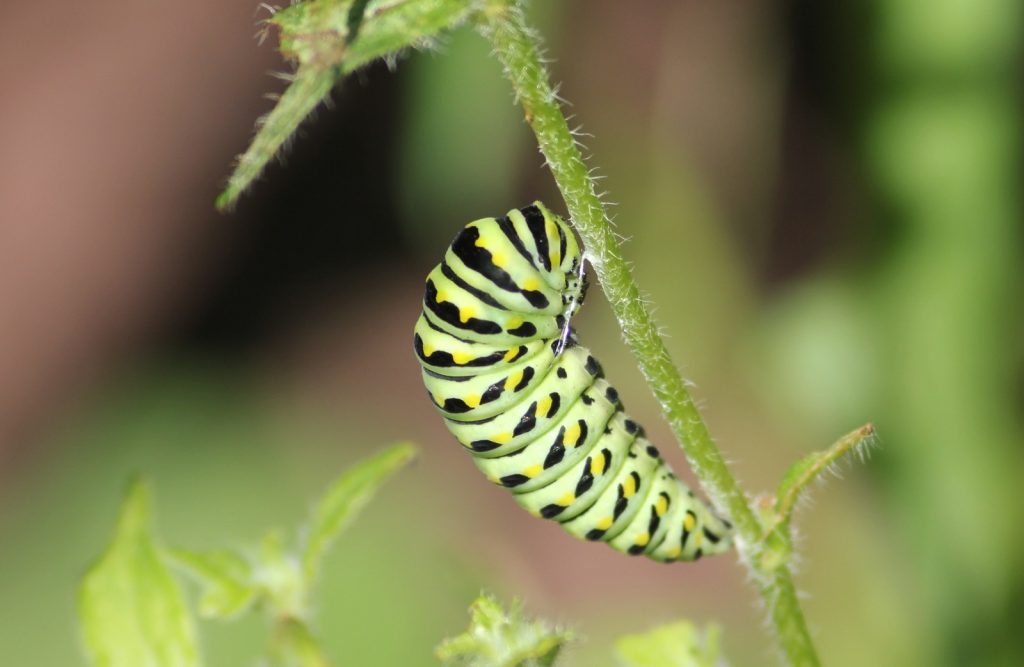 Dolores Amesbury documented a black swallowtail cat going into metamorphosis in her garden in Cape May Courthouse from 8/4/16 to 8/5/16. 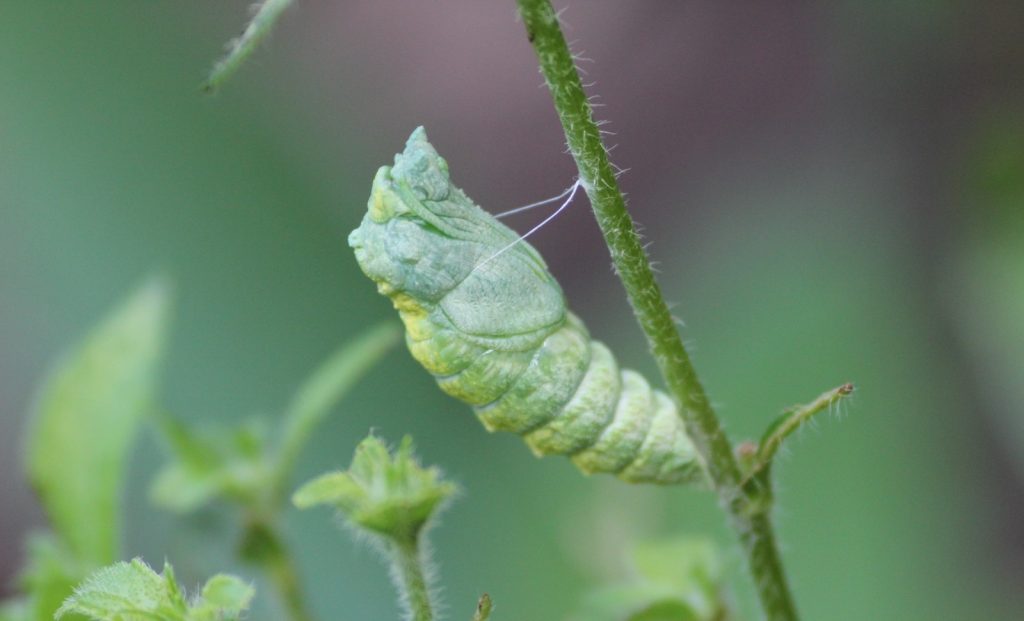 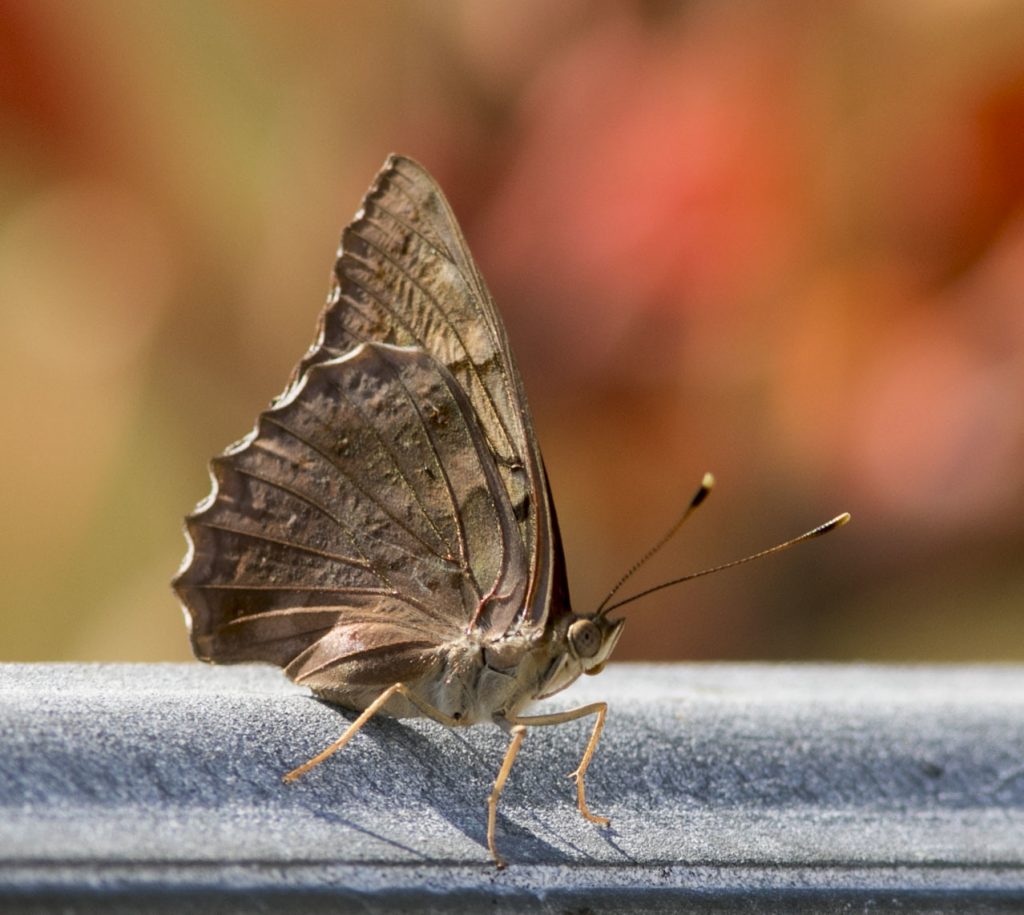 We had a number of reports of both emperors in August, including this tawny emperor photo’d by Beth Polvino in her garden in North Cape May on 8/12/16. 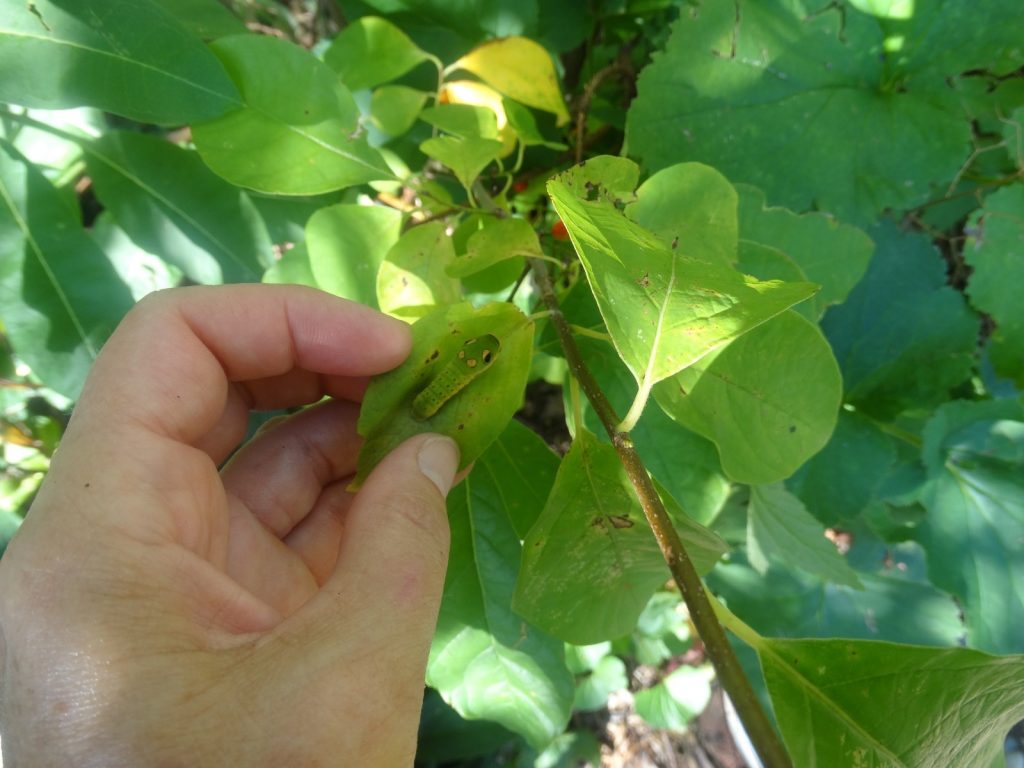 Chris Herz photo’d this spicebush swallowtail late-instar cat in her garden in Audubon, CAM, on 8/13/16. 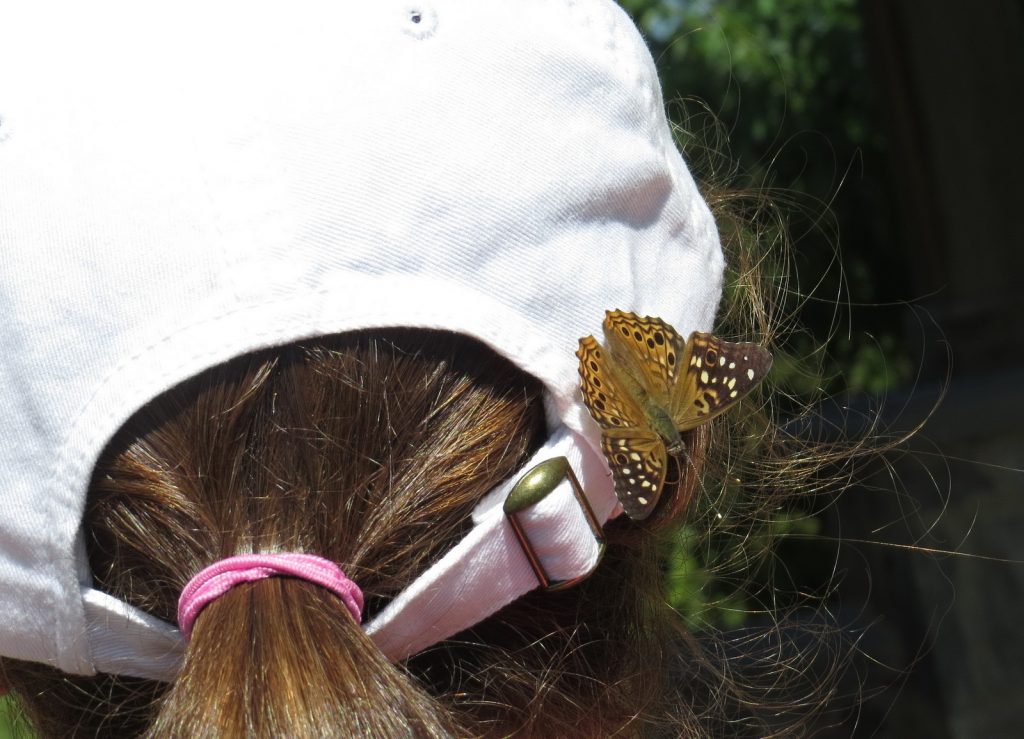 A hackberry emperor rode on this young field tripper’s hat and arm for 45 minutes on a walk led by Jennifer Bulava on 8/15/16 at Boundary Creek, BUR. 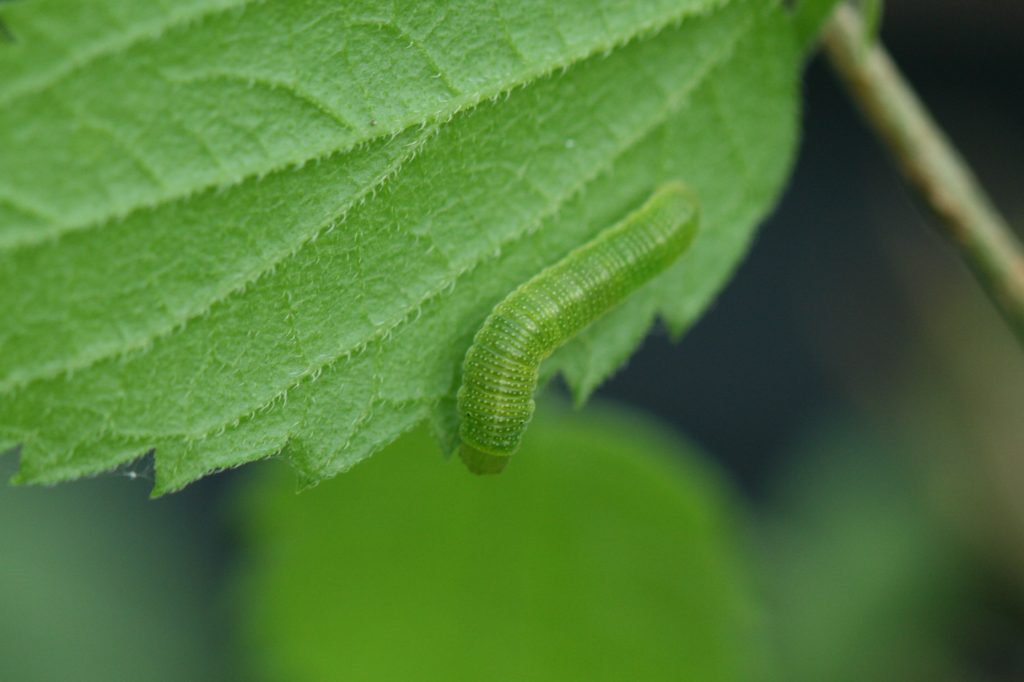 It’s been a good year for American snout and Jesse Connor found this snout caterpillar on hackberry in her garden in Port Republic, ATL, on 8/19/16. 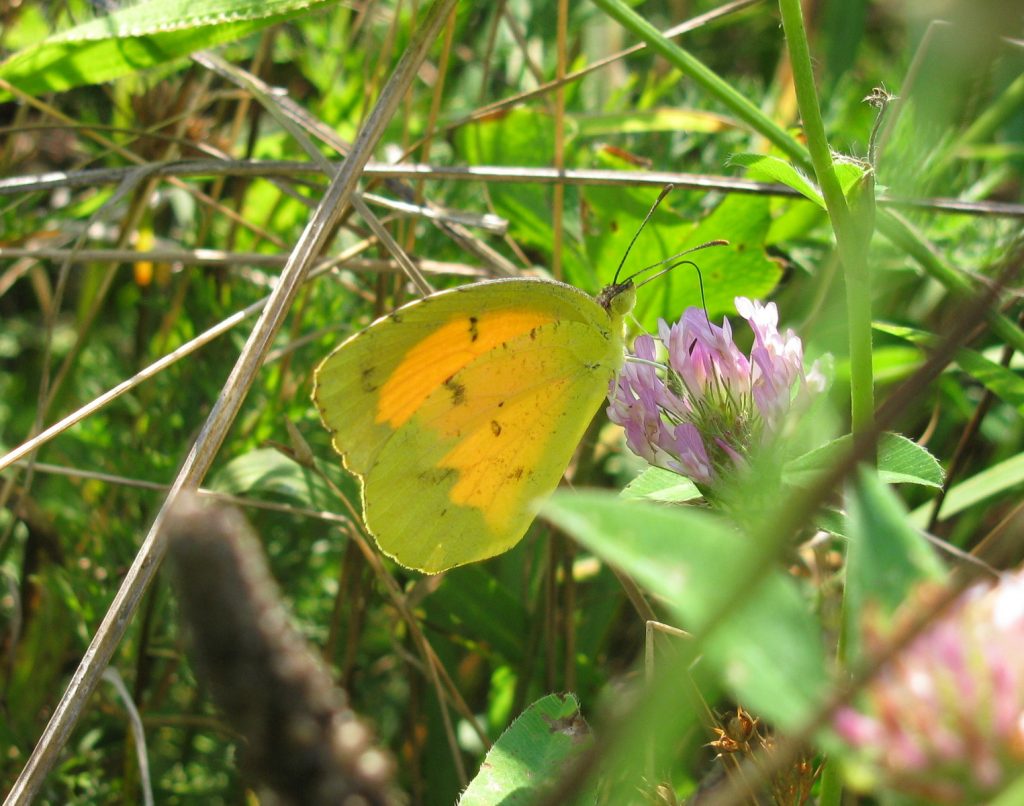 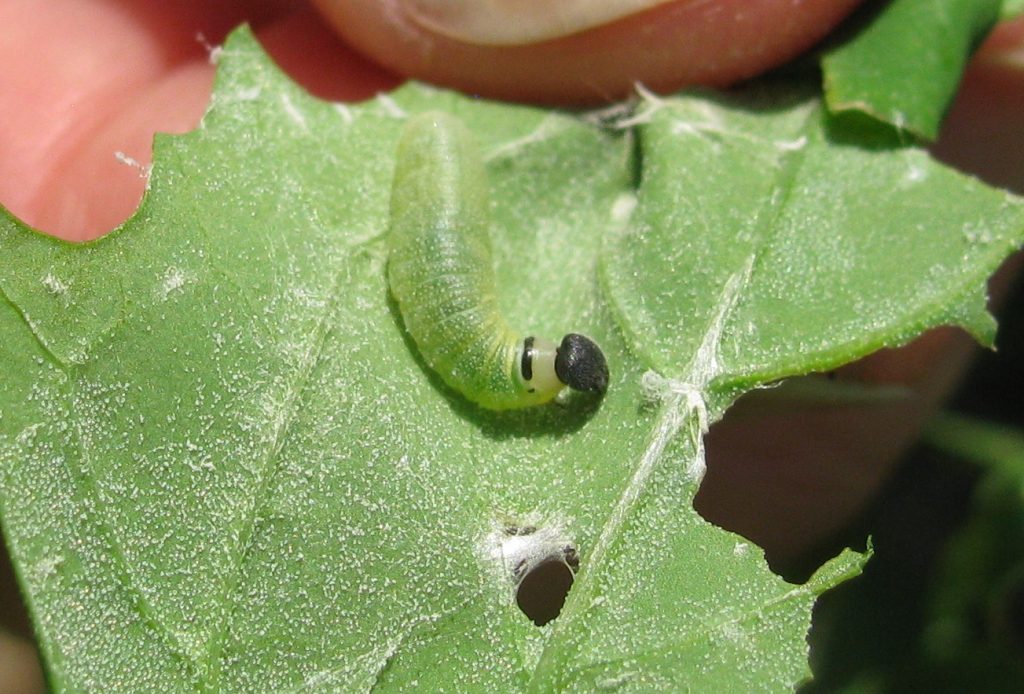 Steve also managed to find and photo a Hayhurst’s scallopwing cat at Dix WMA on 8/20/16. 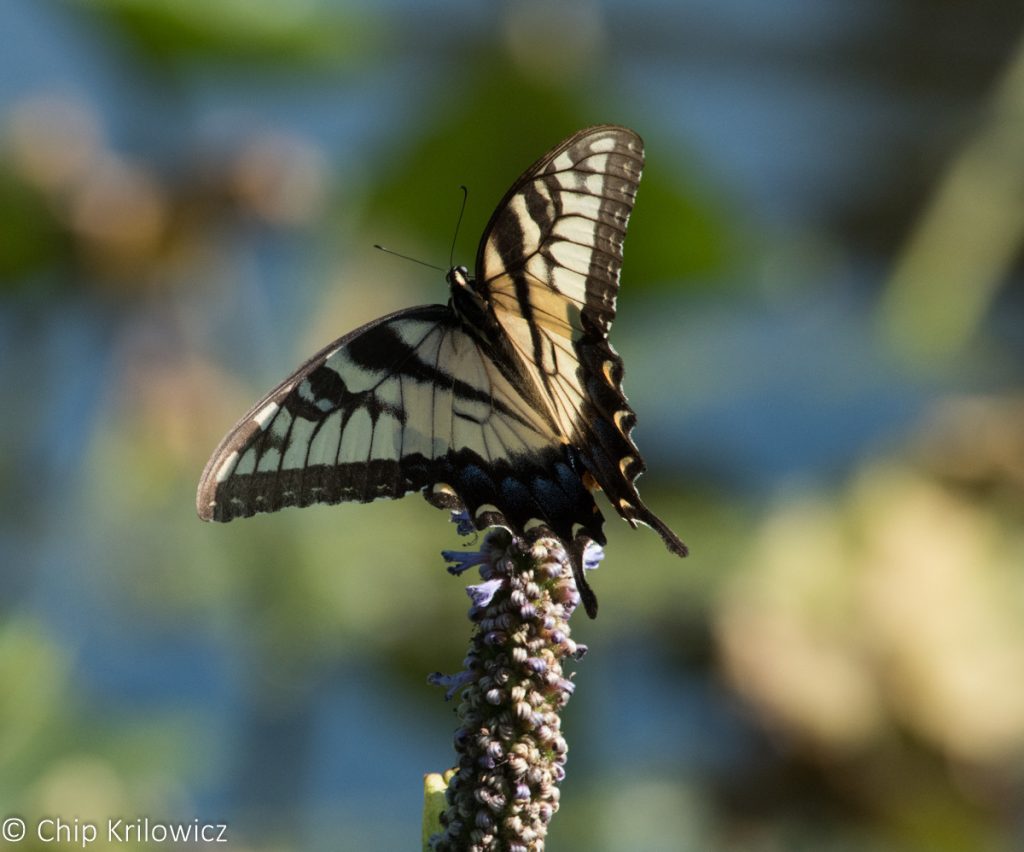 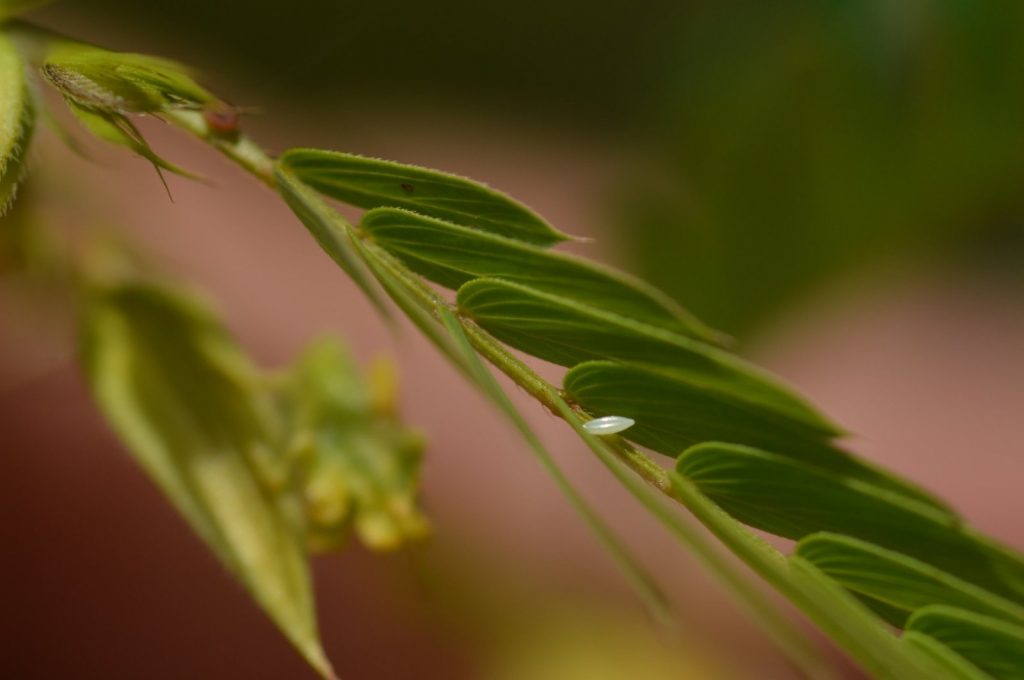 A cloudless sulphur egg on sensitive pea photo’d by Will Kerling at Estell Manor, ATL, on 8/21/16. Be on the lookout for caterpillars, everyone — or even better a chrysalid! 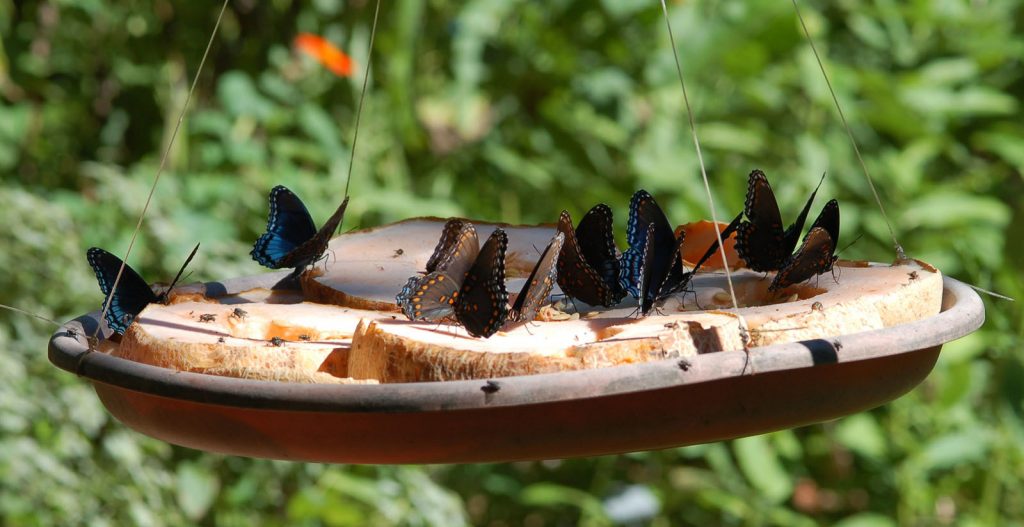 Pat & Clay Sutton drew double-digit numbers of both red-spotted purples (here on 8/23/16) and Appalachian browns to “gooey” fruit dishes in their garden in Goshen throughout the month. 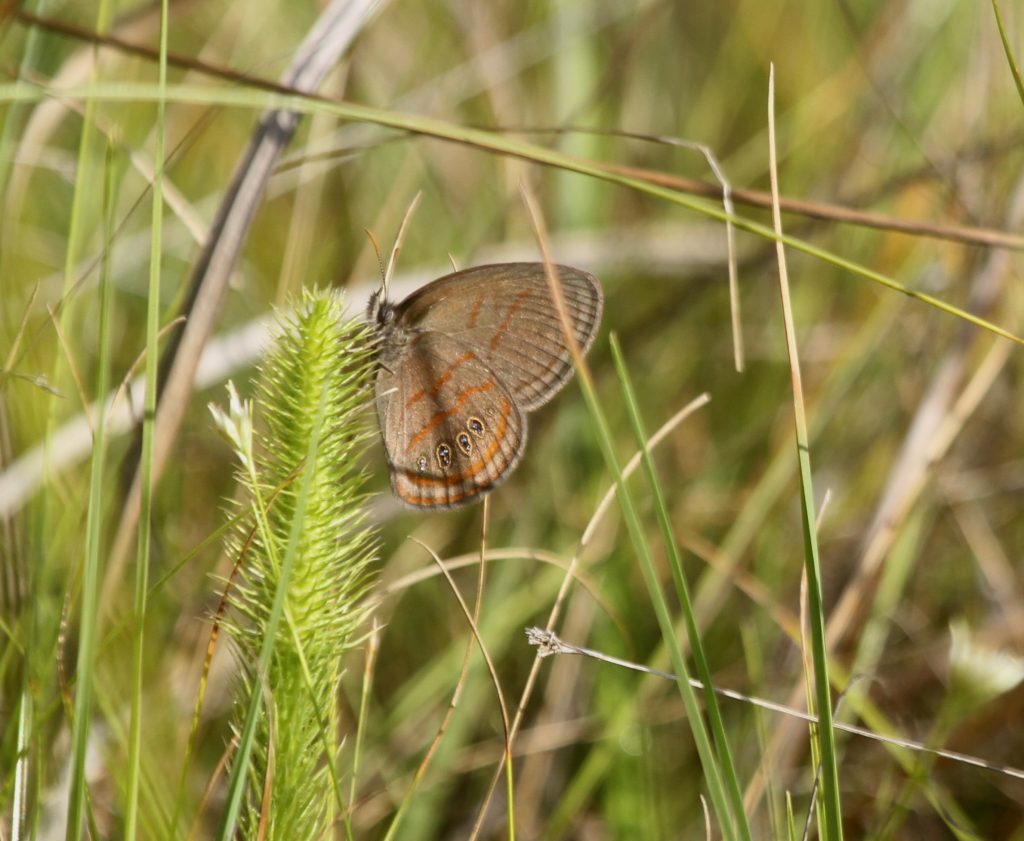 Brian Johnson found second-brood Georgia satyrs flying at a bog in BUR on 8-25-16. Most sources consider NJ’s population of this rarity to be single-brooded, flying in June-July. 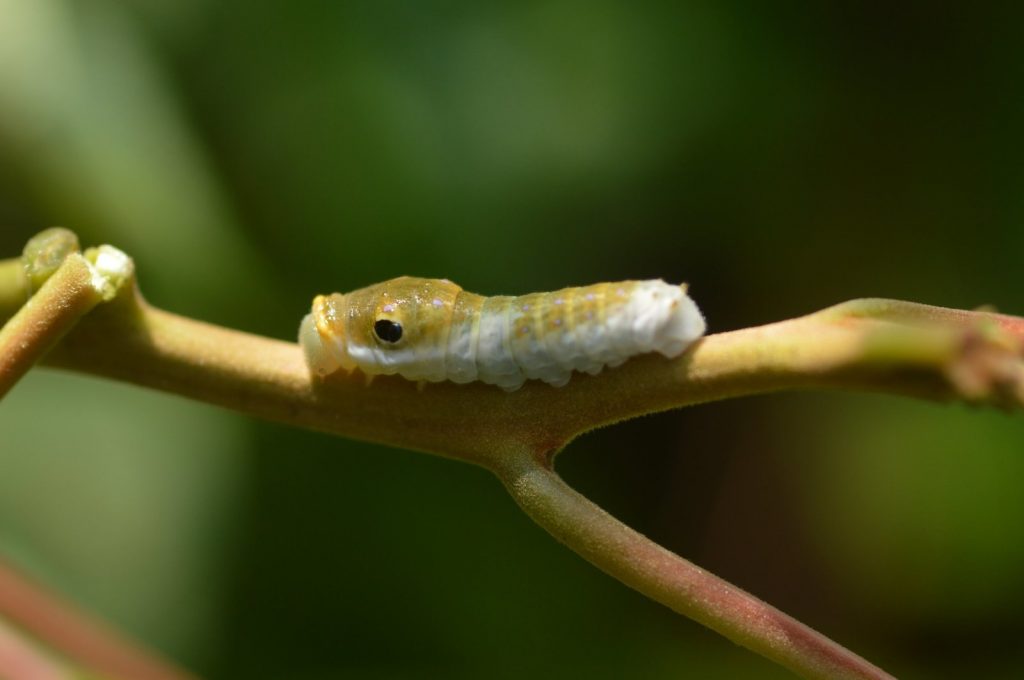 Will Kerling found this early-instar spicebush swallowtail caterpillar on the Middle Township Bike Path, CMY, on 8/26/16. 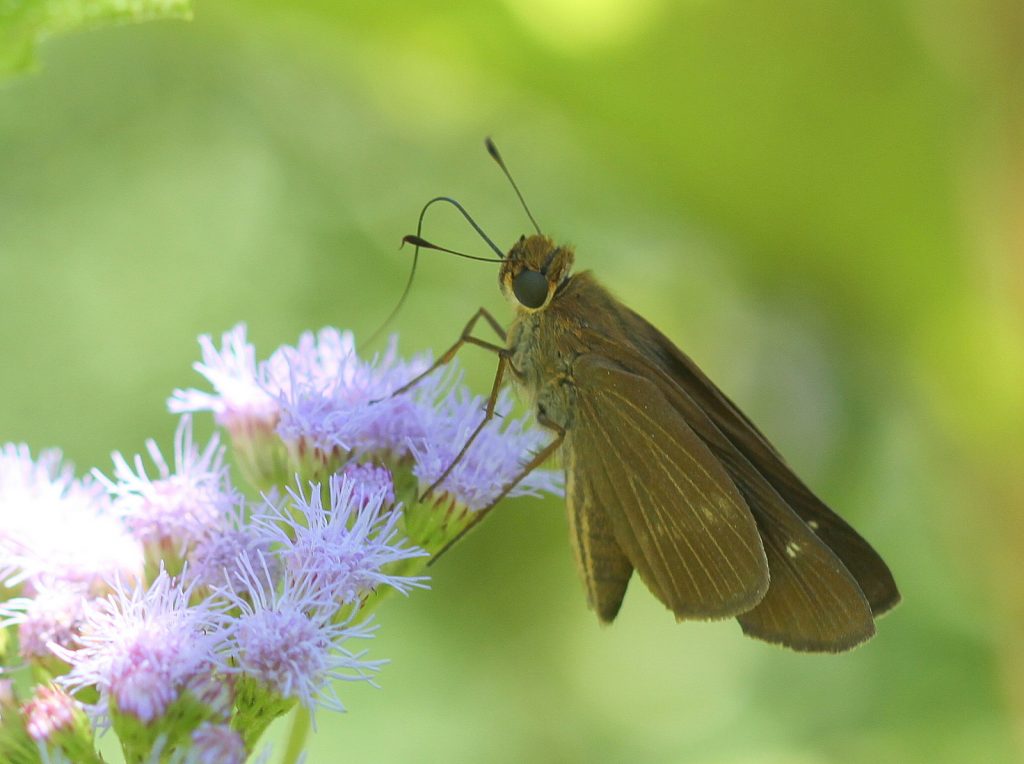 Our only Ocola skipper recorded so far this year is this one found by Dave Amadio at Chestnut Branch, Mantua, GLO, on 8/27/16. 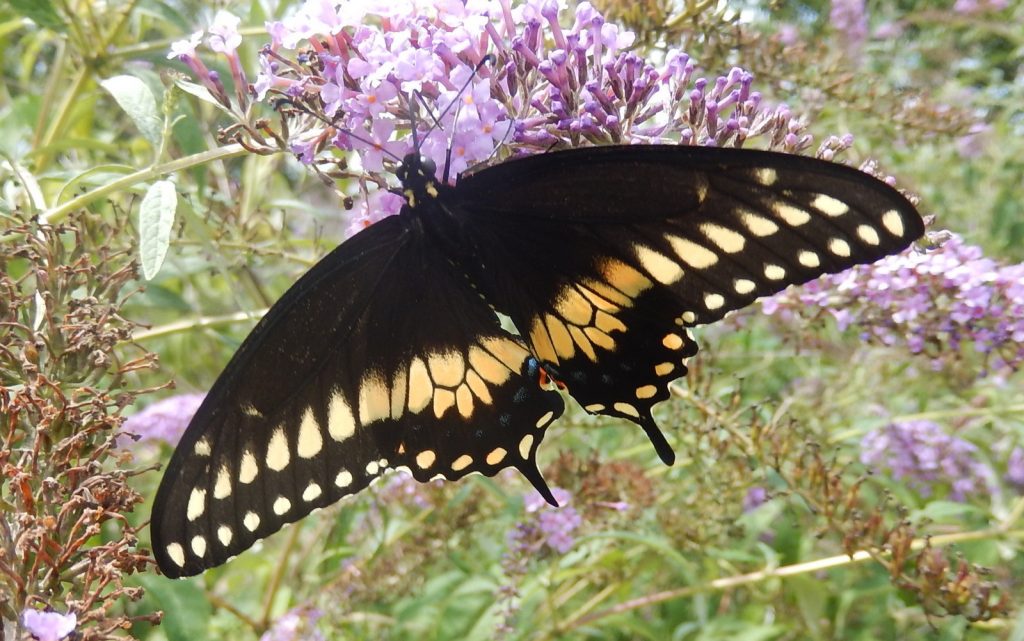 Jack Miller photo’d this male black swallowtail in his garden in Petersburg, CMY, on 8/31/16. 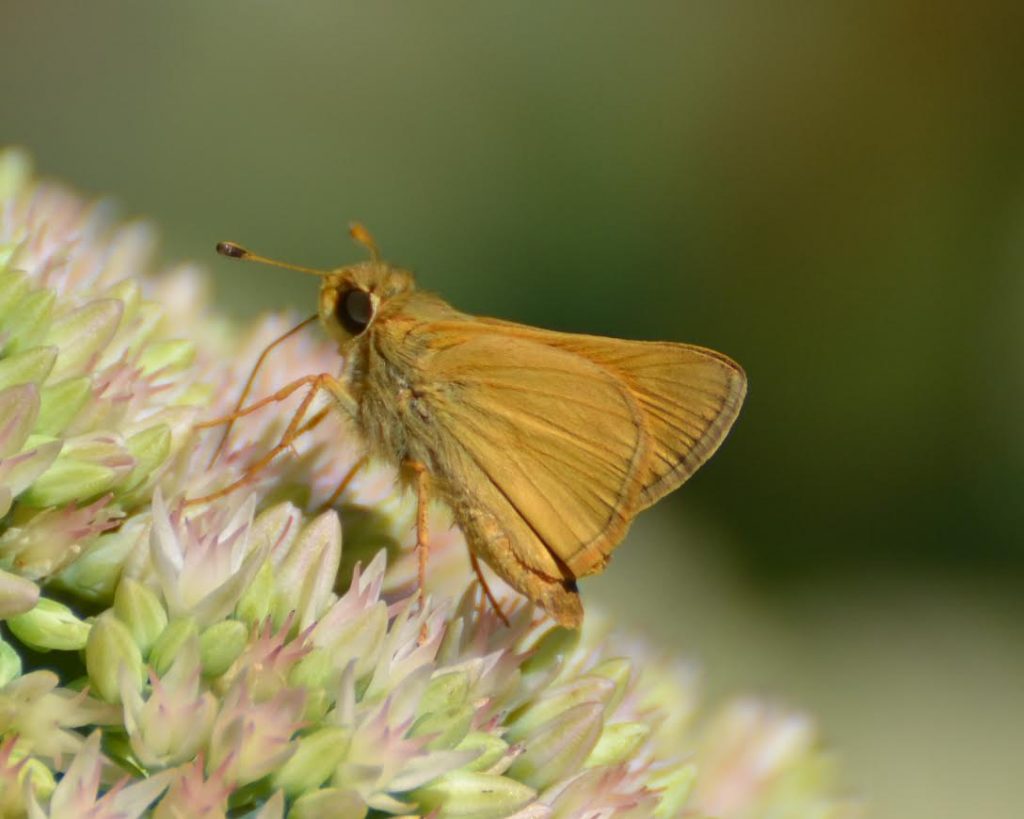 Delaware skippers may fly into September (which they do not always do in South Jersey). Claire Campbell photo’d this one in her garden in Marlton, BUR, on the last day of August. 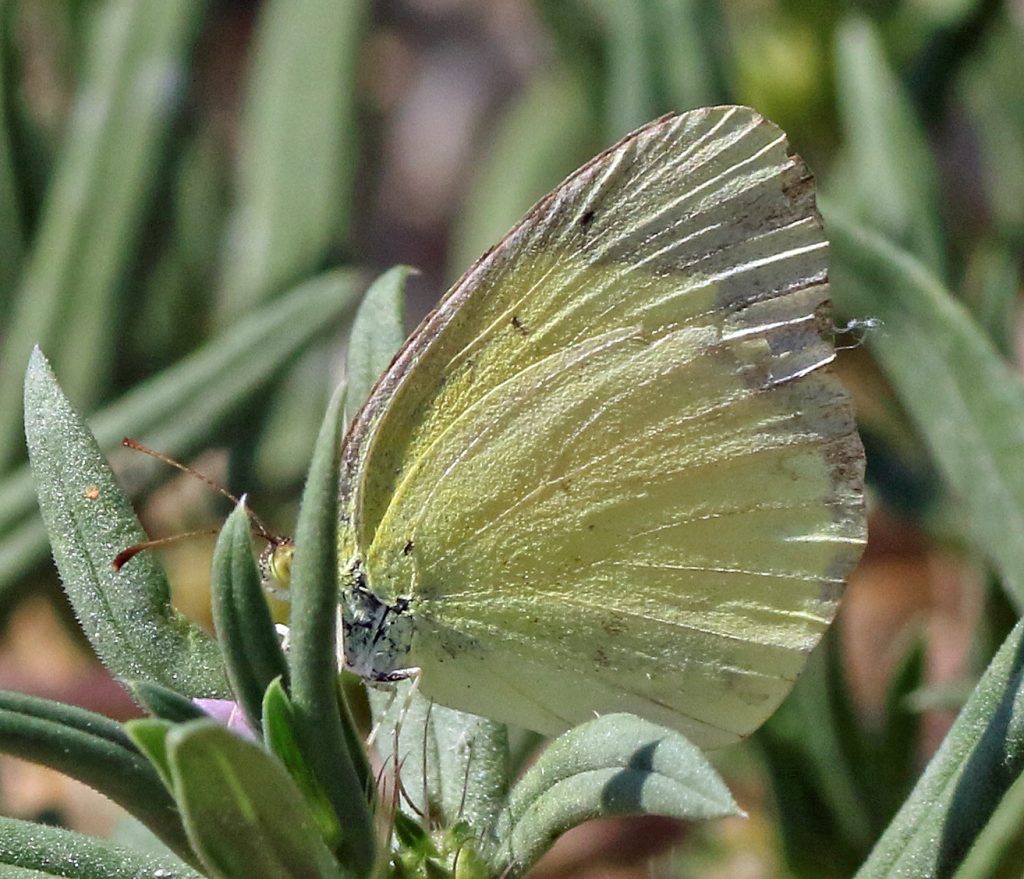 This little yellow found and photo’d by Harvey Tomlinson on 8/31/16 at Forsythe NWR, ATL, is one of only two reported in NJ north of Cape May County in 2016 so far.

This entry was posted in Compilations, First Emergences, Migration. Bookmark the permalink.