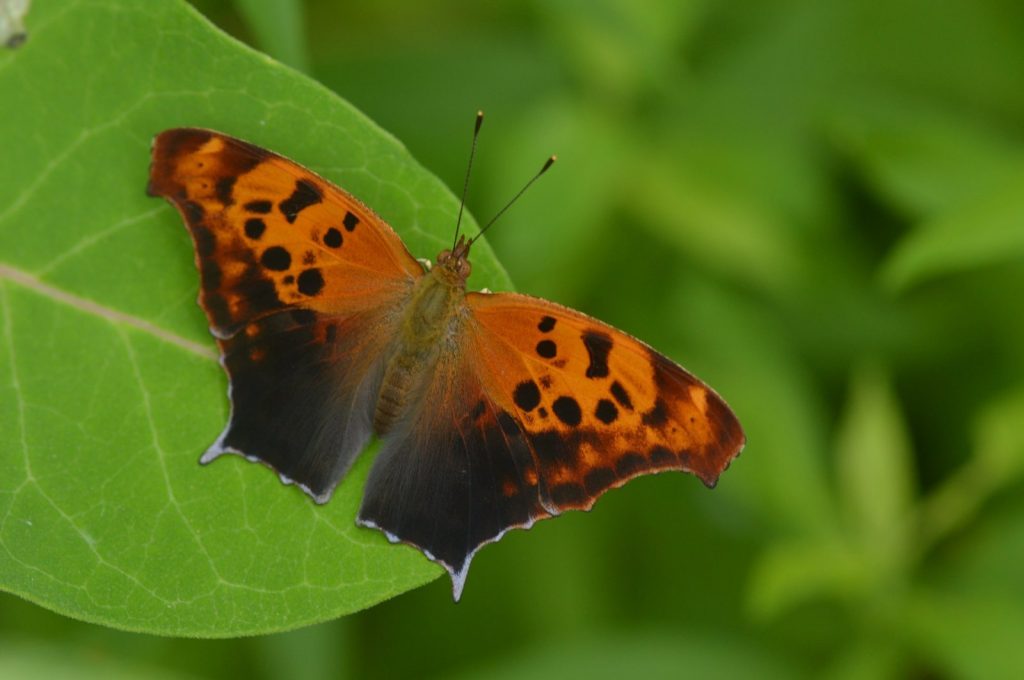 A lovely summer-form question-mark photo’d by Will Kerling at Highs Beach (CMY) on July 1.

Let me start with a shout-out to Jack Miller who compiled observers and species for the month and also helped select the photos for this month’s gallery.  Thank you, JM!

Thanks to each of you!

Depending on how you count the new name in brackets below, we collected reports of 67 or 68 species in July.  (FOYs are italicized with dates of first report.)

Seven single-brooded species apparently ended their flights for 2016 in June (not reported in July):

Identifying the emergence of a new brood is often difficult, because the gap between broods can be brief or even non-existent. However, at least three species made no-question-about-it second brood flights in July, long after their first broods had ended:

As we have seen each year of our log, butterfly populations do not move in tight synchrony:  a good year for some species can be a bad year for others.

2016 has been a good year for several species, including American snout, dion skipper, northern broken-dash, and others.

At the opposite end of the spectrum some species seem to be struggling.  Perhaps the most obvious absence is painted lady.  It’s a notoriously cyclic species and this year is clearly a down year for it, at least so far.  We have recorded just two individuals: one photo’d in Atlantic County (Estell Manor area, ATL) by Will Kerling on May 9 and the other found by Clay Sutton in the Sutton garden in Goshen (CMY) on June 27.

Finally [drum-roll here] how do we count …. 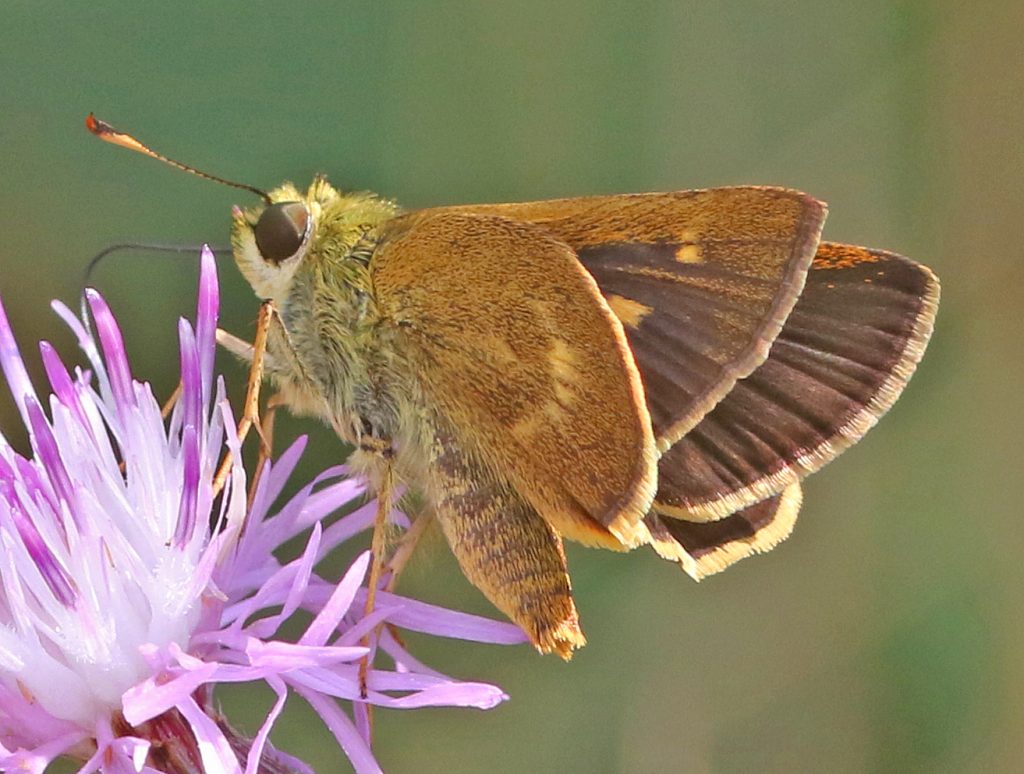 Southern broken-dash? This and another photo by Harvey Tomlinson (see previous post) suggest NJ has been invaded by a species new to the state’s all-time list.

Harvey’s photos of his find at Forsythe NWR on July 26 have generated lots of commentary.

Virtually all veteran observers and other authorities who have emailed me have supported Harvey’s original call, although some underscored that the ID cannot be absolutely certain without a specimen.

As noted in the previous post, David Wright responded to the two photos with “Mighty suspicious of southern broken-dash.”

Michael Gochfeld, co-author of the indispensable Butterflies of New Jersey, replied, “Harvey’s photo is impressive.  Has anyone seen an NBD that bright? Or to turn it around:  if that photo were taken in Virginia, how would you have identified it?  When I was a BAMONA editor, I would probably have listed it as a tentative NJ record.”

Rick Borchelt, website master of the wonderful blog, The Lep Log, which monitors butterfly reports from our southern neighbors from Delaware to Virginia, emailed, “Yes, that is a very typical W. otho.  As you see more of these, you’ll see they’re just much brighter orange — especially the antennae — than [northern broken-dash]… We are seeing them [southern b.d] across the region right now.”

Very few of our log participants collect butterflies (and some are adamantly opposed to the practice), so it might be a while before the species can be documented as a new species for the state of New Jersey with a specimen.  In the meantime, perhaps the best way for “netless” butterflyers to try confirm its presence in our area is to find more broken-dashes that look suspiciously red. We might find reddish/two-tone-margined broken-dashes in the field over the next month — or by doing a review of photographs from past years.

Harvey’s shots have opened our eyes to the possibility of this hard-to-ID species flying on the NJ Coastal Plain. Could it have already been here hidden by the variety of its closest relative?

At the moment the leading candidate photo of a second southern broken-dash is the one taken by Dolores Amesbury in her garden, Cape May Courthouse on July 27 (see previous post).  Dave Amadio emailed, “Harvey’s images really look good for W.otho. Dolores Amesbury’s image is pretty convincing as well.” (I’ve added in the gallery below a different one of Dorothy’s photos of a male broken-dash in her garden, from July 21. Taking a close look is worth the exercise, I think. What would you call it?)

Keep chasing and shooting, everyone! 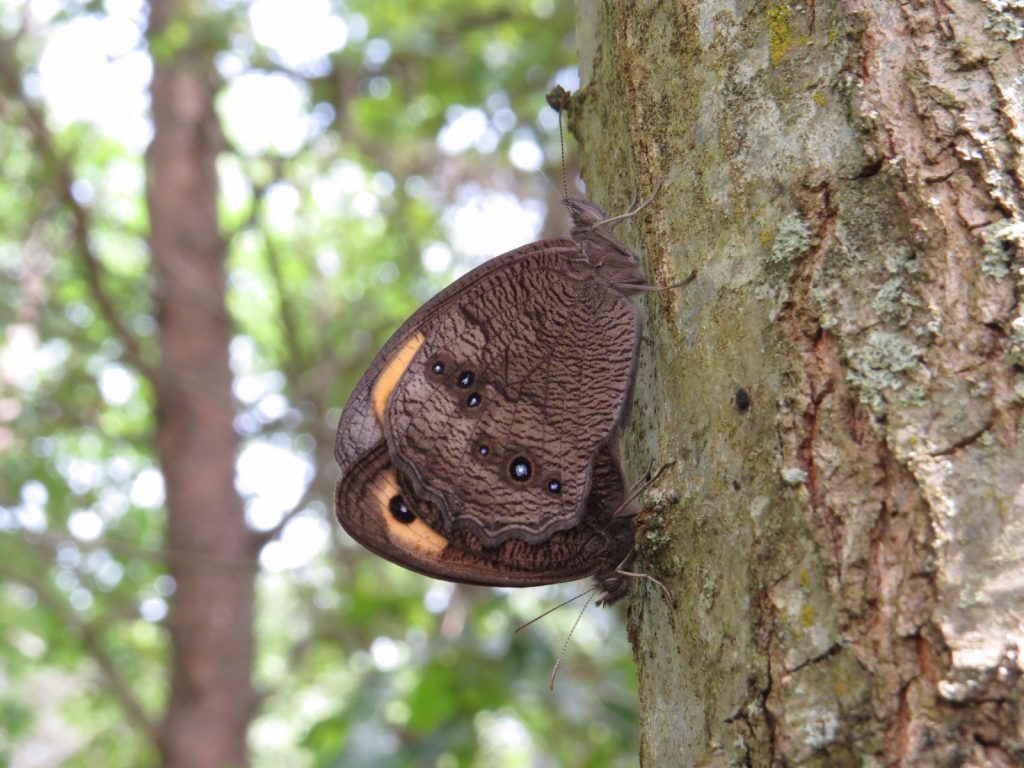 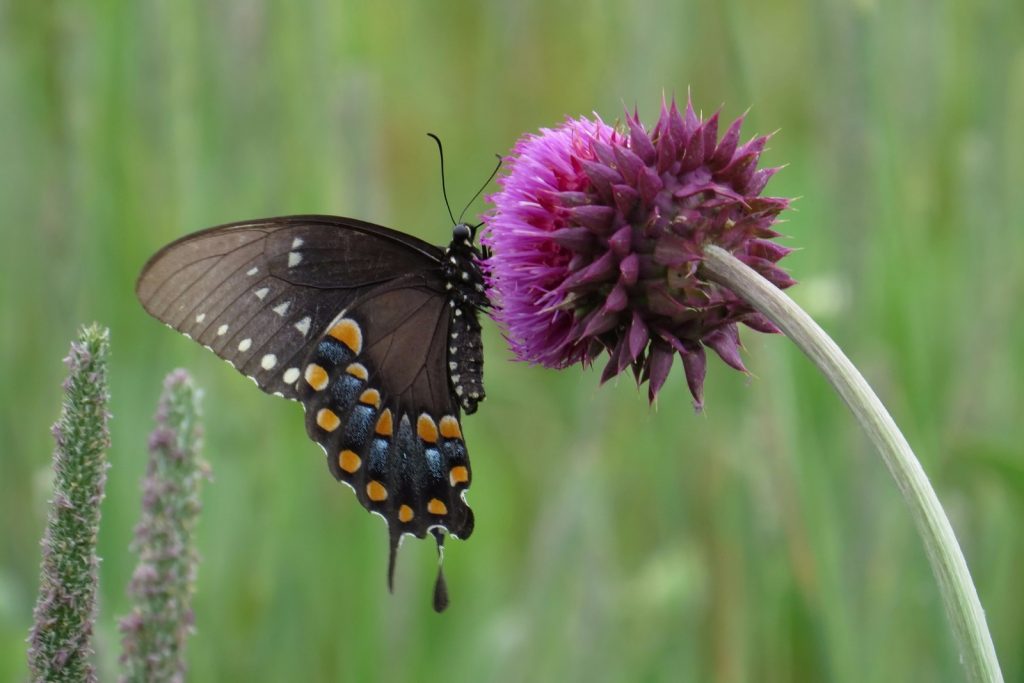 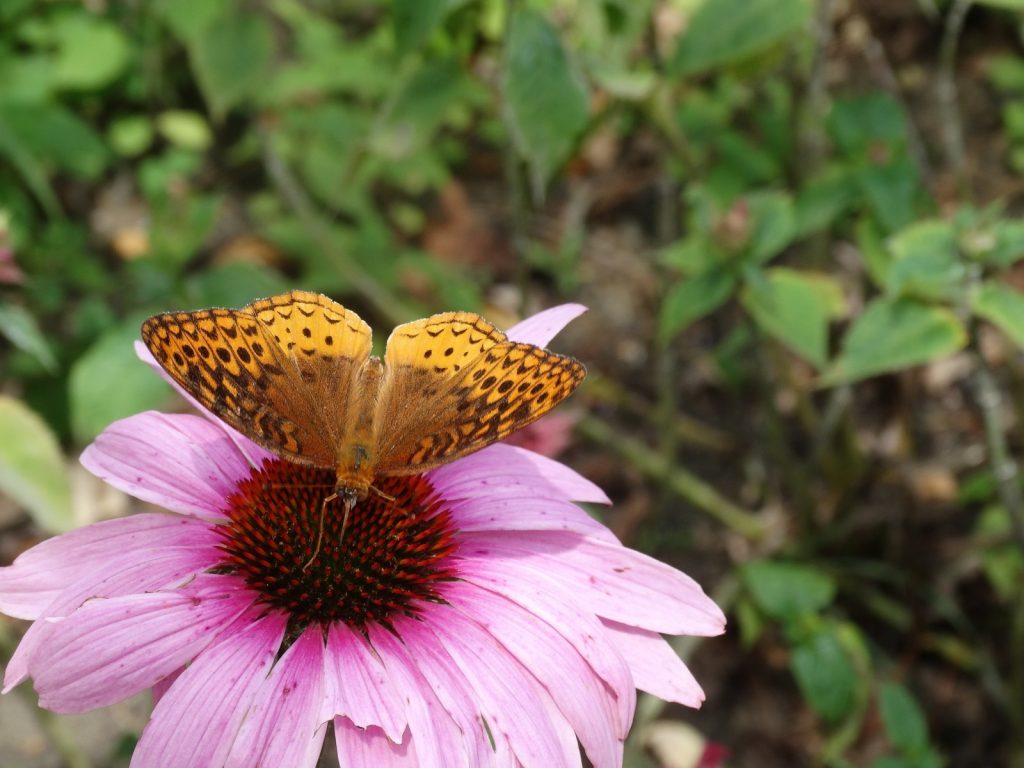 We now have reports of great spangled fritillary in four counties in 2016: Salem, Cumberland, Ocean, and here for Glocuester — photo’d by Chris Herz at Wheelabrator on July 4. 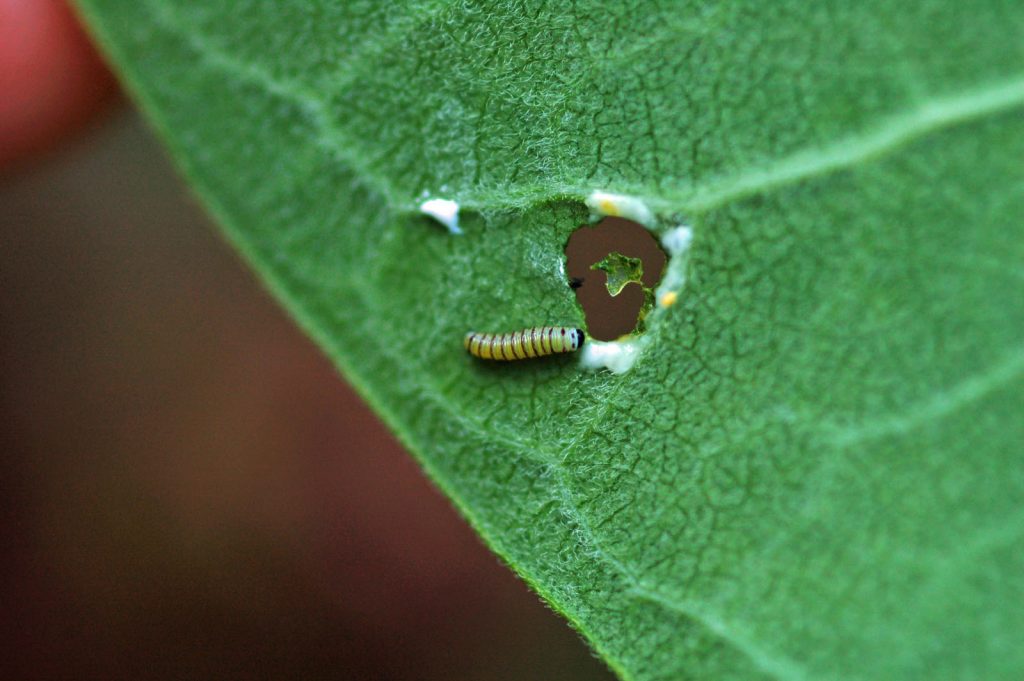 Monarchs moved from scarce earlier in the year to relatively common in July and we collected multiple records of eggs and cats including this early instar photo’d by Pat Sutton in her garden in Goshen on July 8. 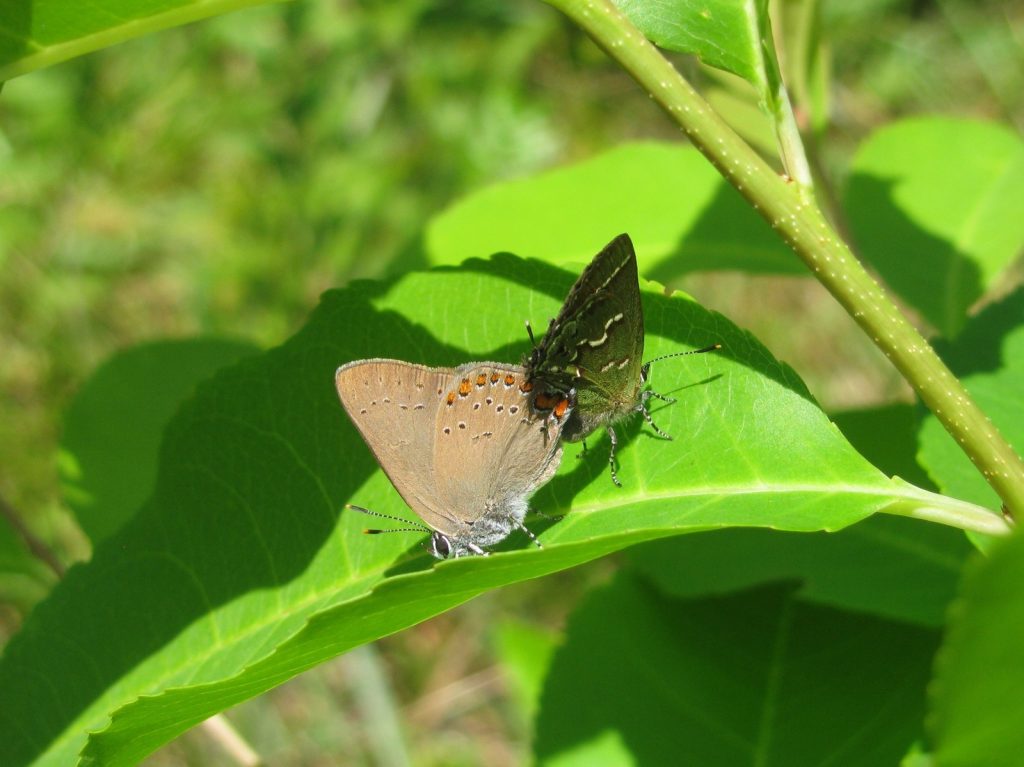 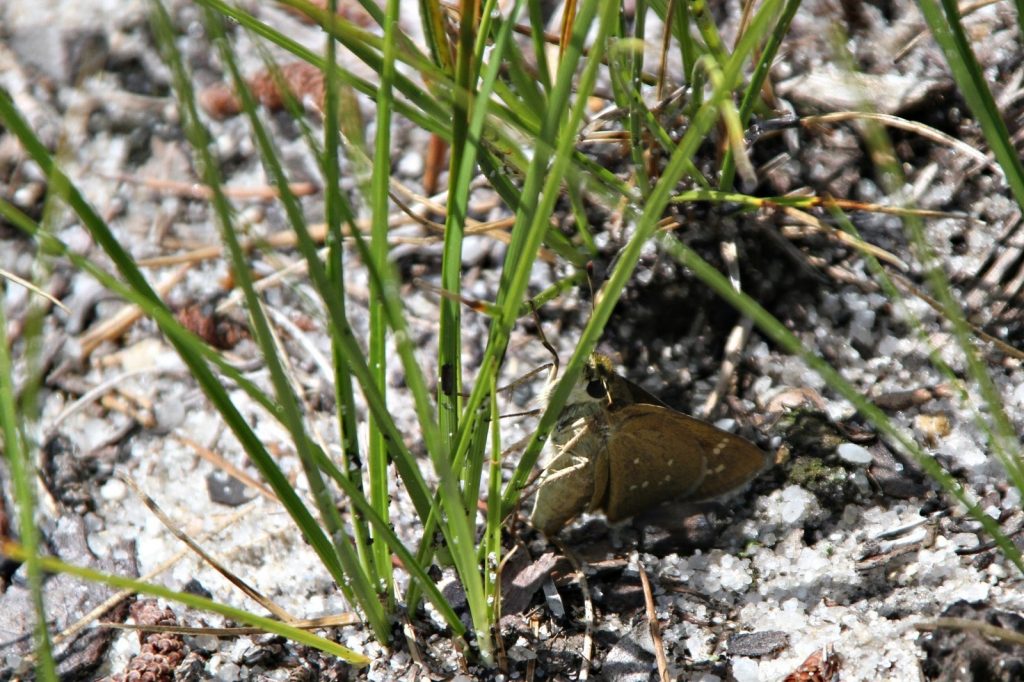 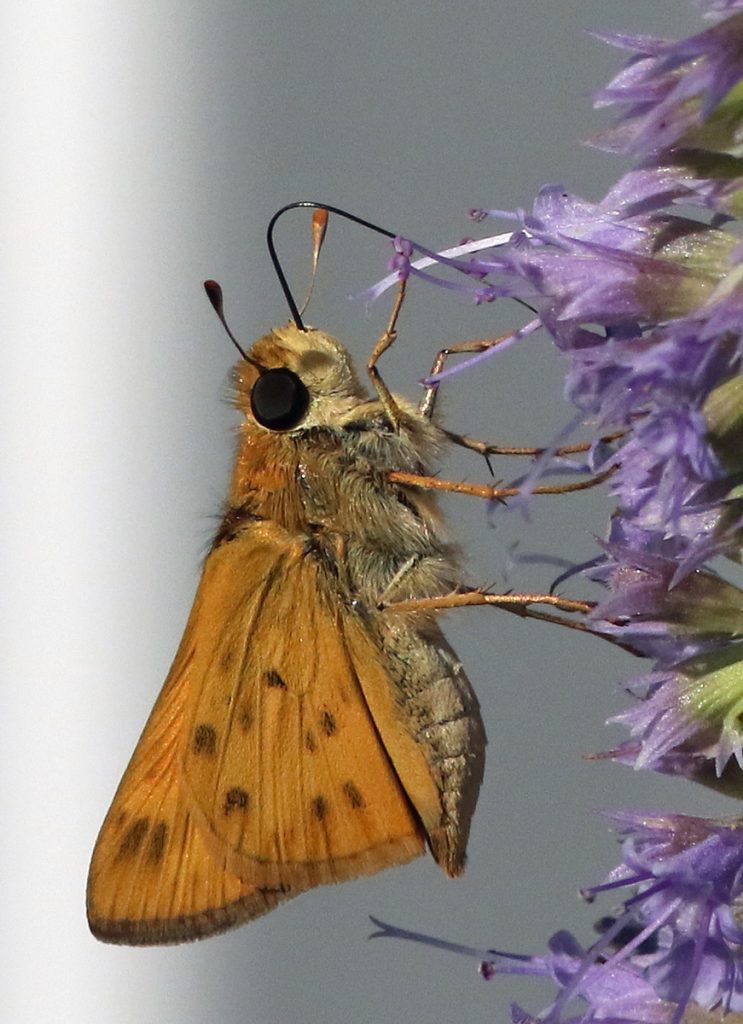 Harvey Tomlinson documented our FOY fiery skipper in his garden, CMY, on July 11. 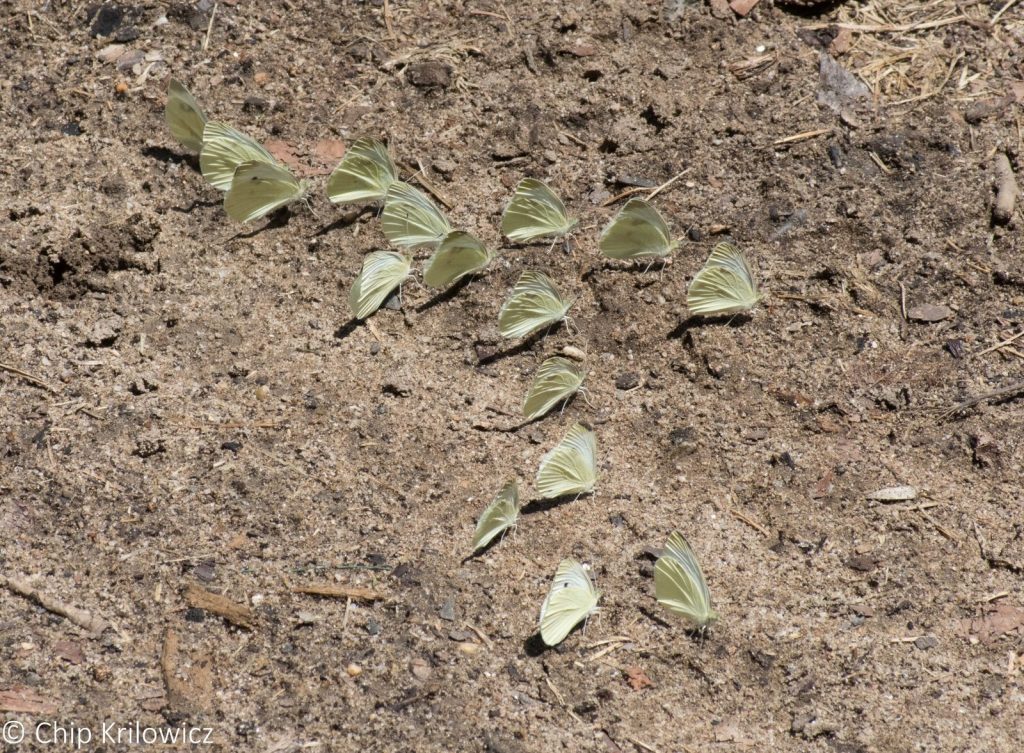 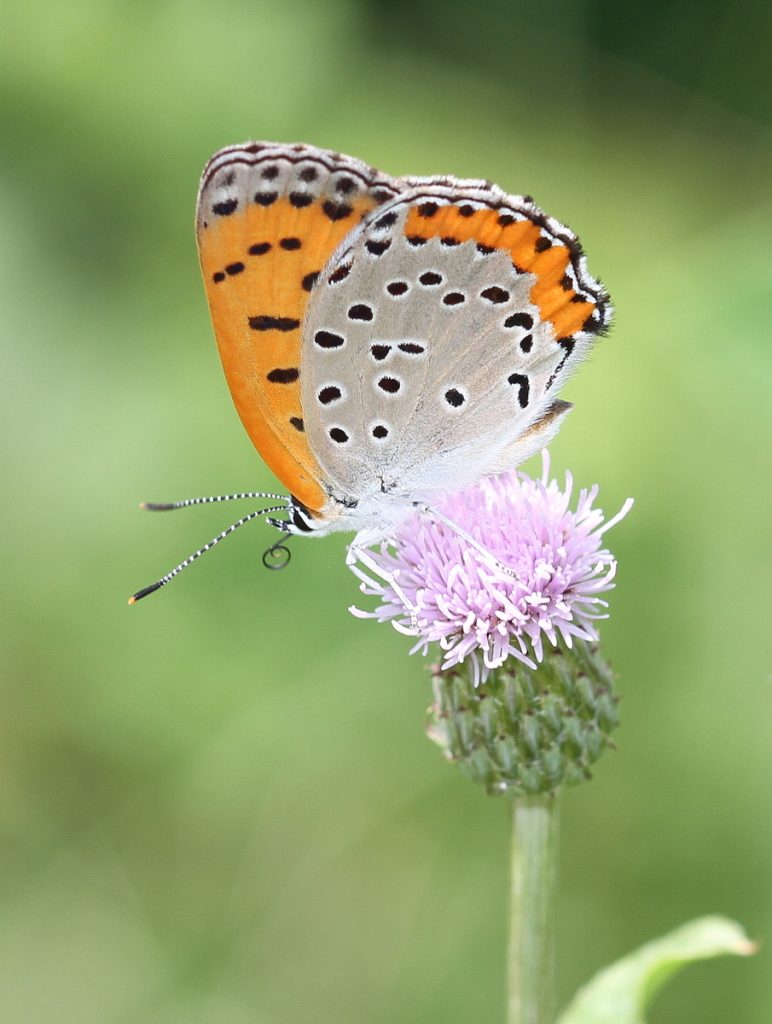 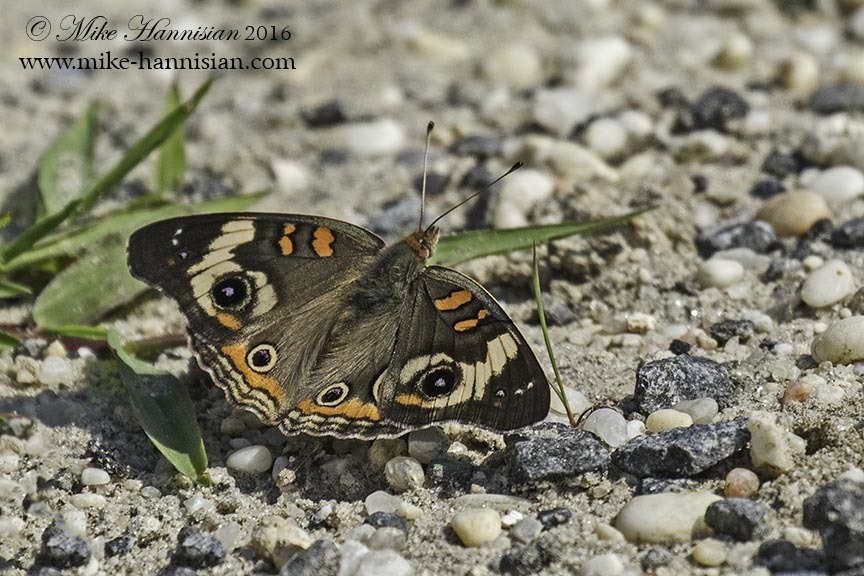 Common buckeyes were reported widely, including this one photo’d by Mike Hannisian in Cape May on July 20. We have no reports of the rosa form so far this year, however. 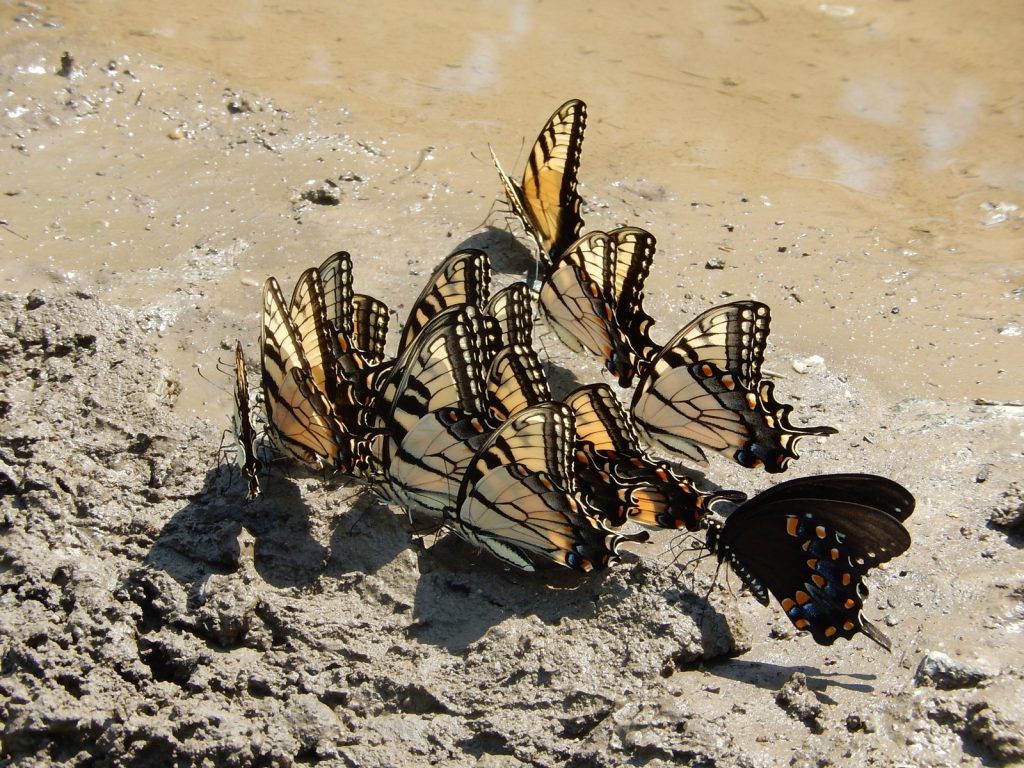 Puddling tigers (with one spicebush) at Beaver Swamp WMA (CMY) photo’d by Jack Miller on July 20. 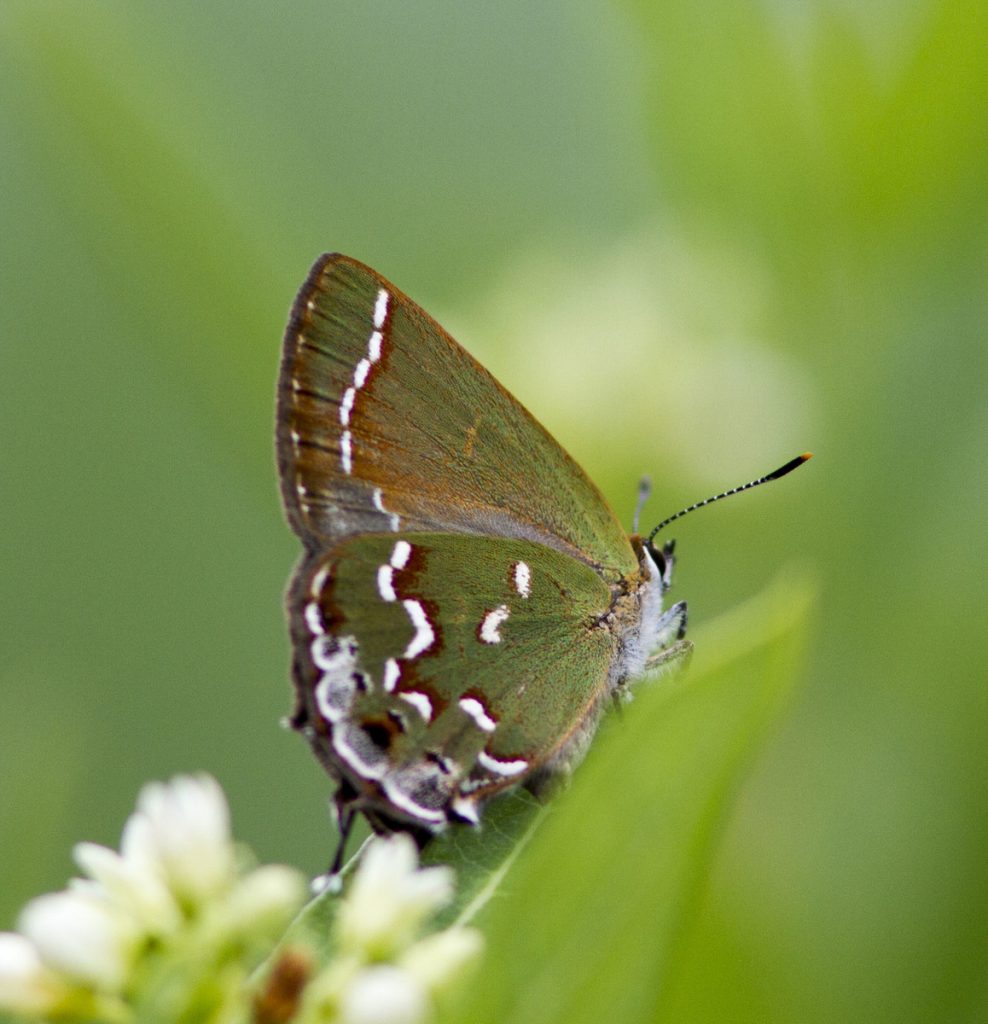 After being so hard to find in their first brood, juniper hairstreaks appeared in multiple sites in July, including this one photo’d by Beth Polvino near the Old Seafood Market on Rt 47 in CMY on July 21. 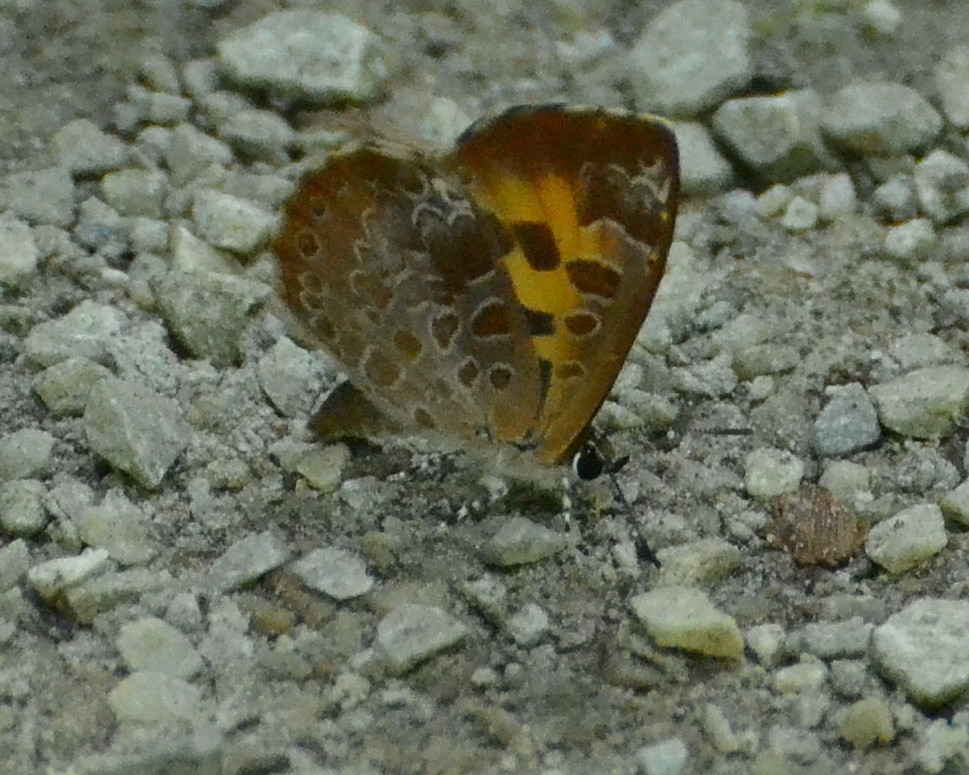 Claire Campbell documented a third site for harvester in Burlington Count in 2016 with this find at Pemberton Rail Trail on July 21. 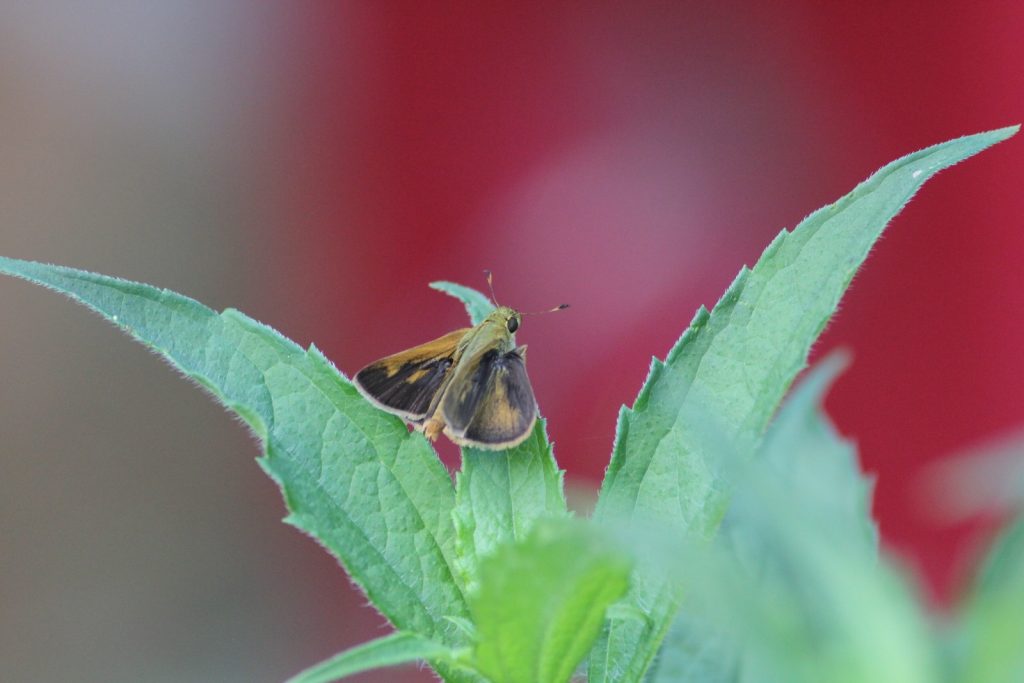 Dolores Amesbury photo’d this skipper in her garden in CMCH on July 21. What’s your call? 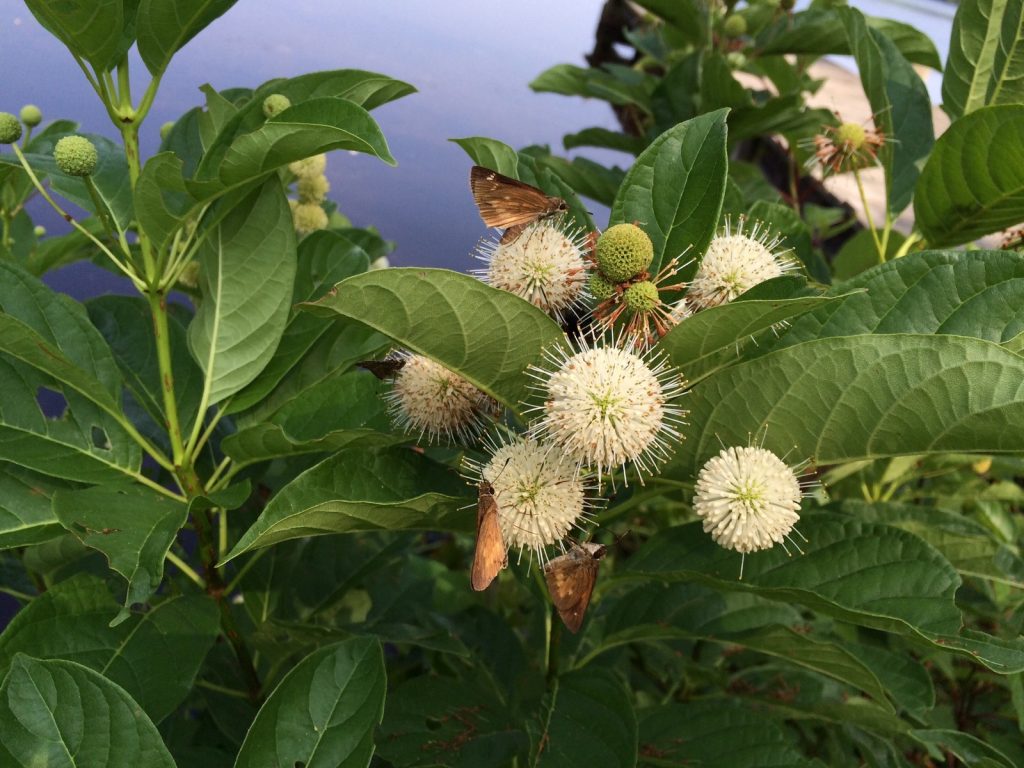 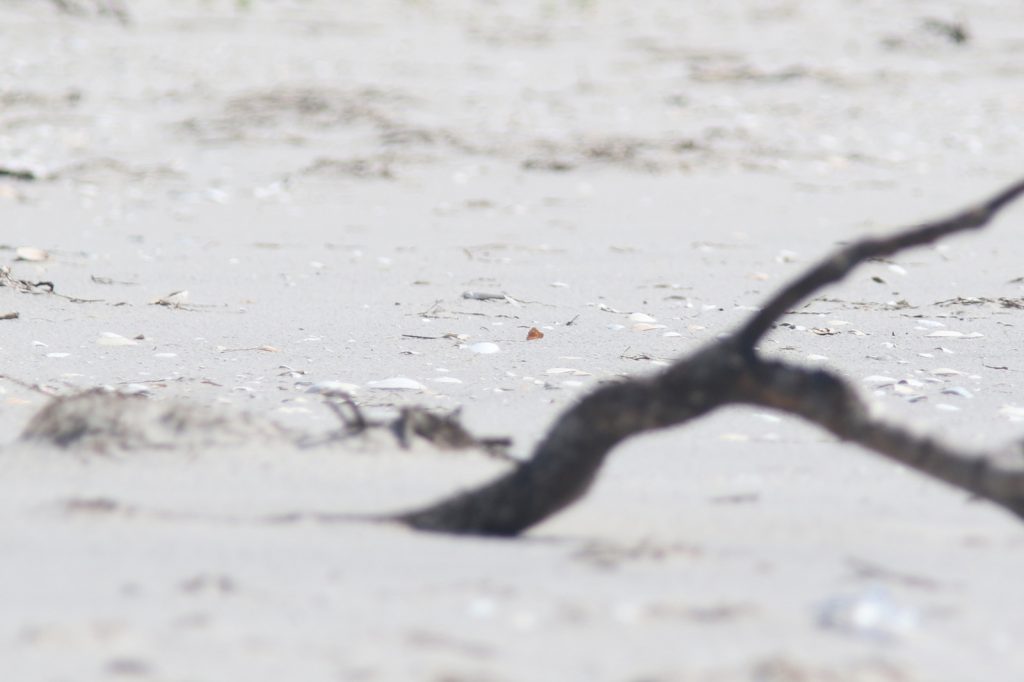 Can you see it? Jesse Amesbury spotted this variegated fritillary way out on the sand at Holgate, OCN, apparently already on migration on July 26. 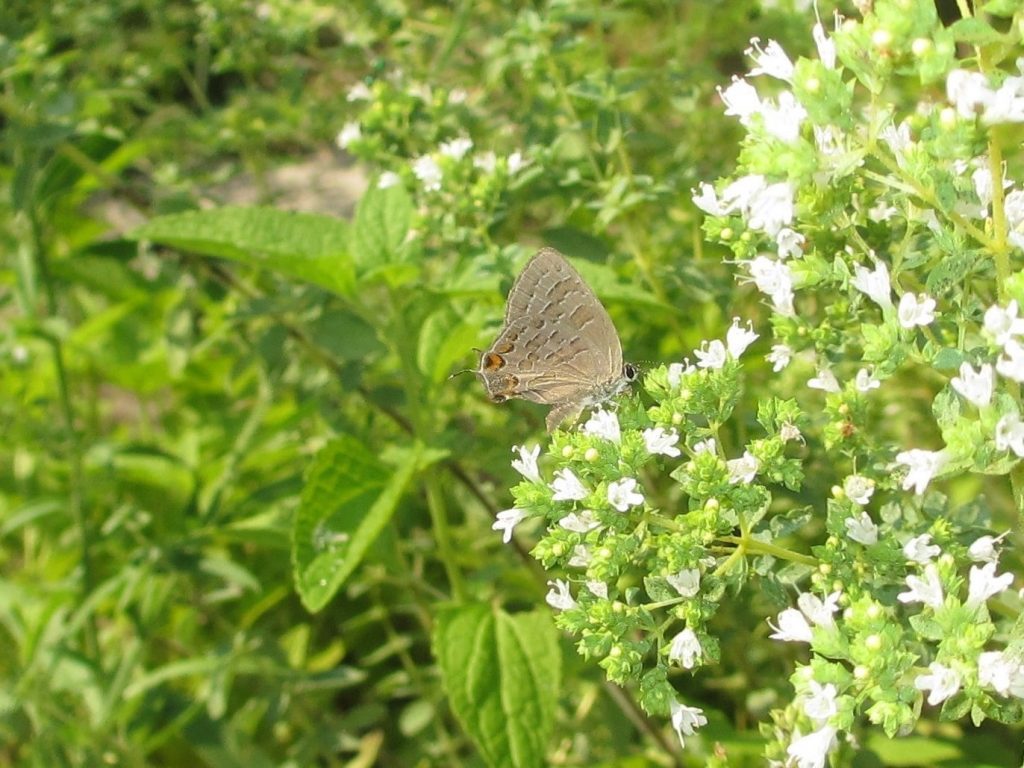 Cynthia Allen found a late striped hairstreak (our final Satyrium for 2016?) in her garden in Cape May Courthouse on July 27. 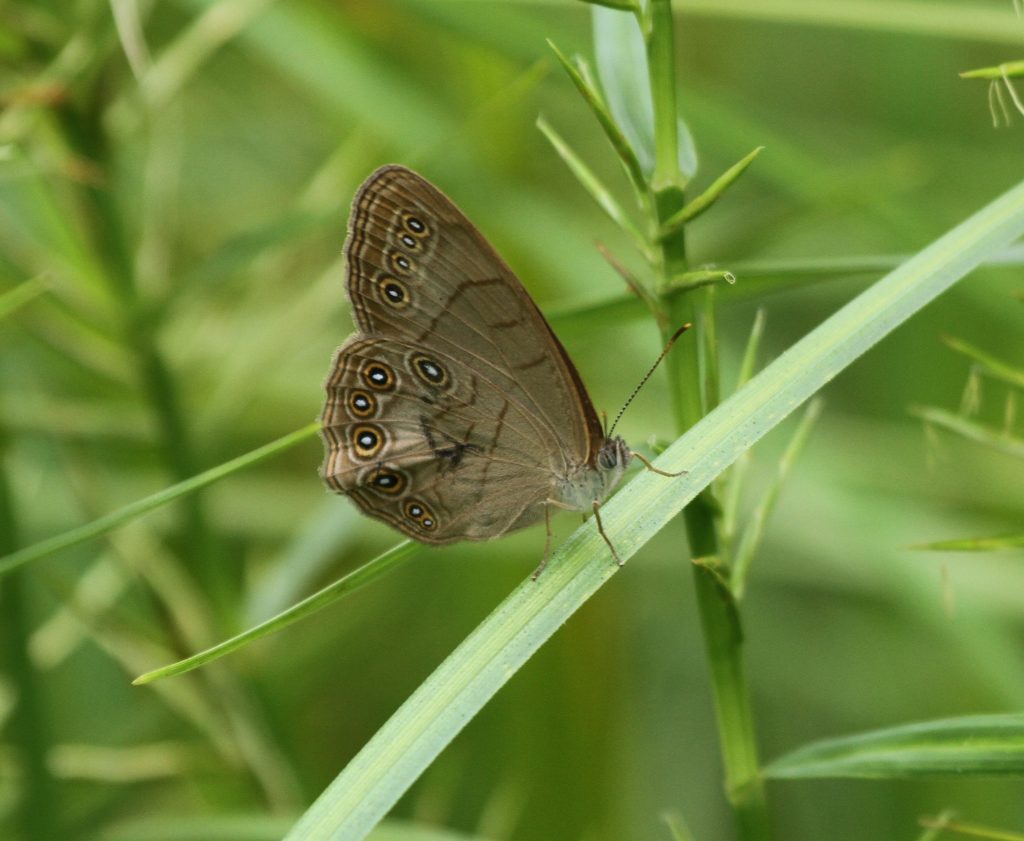 We had more than a dozen reports of Appalachian browns, including this one photo’d by Brian Johnson near Weatherby Road, CMY, on July 30. 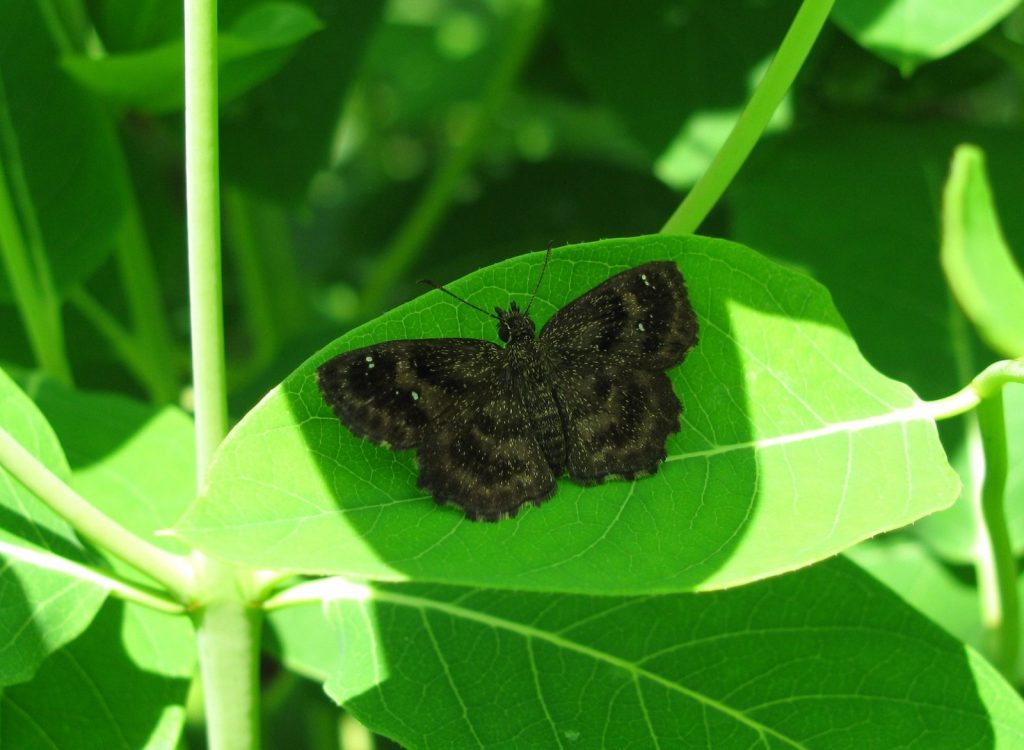 This entry was posted in Compilations, First Emergences, ID Challenges & Tips, Looking At Our Data, Skippers. Bookmark the permalink.