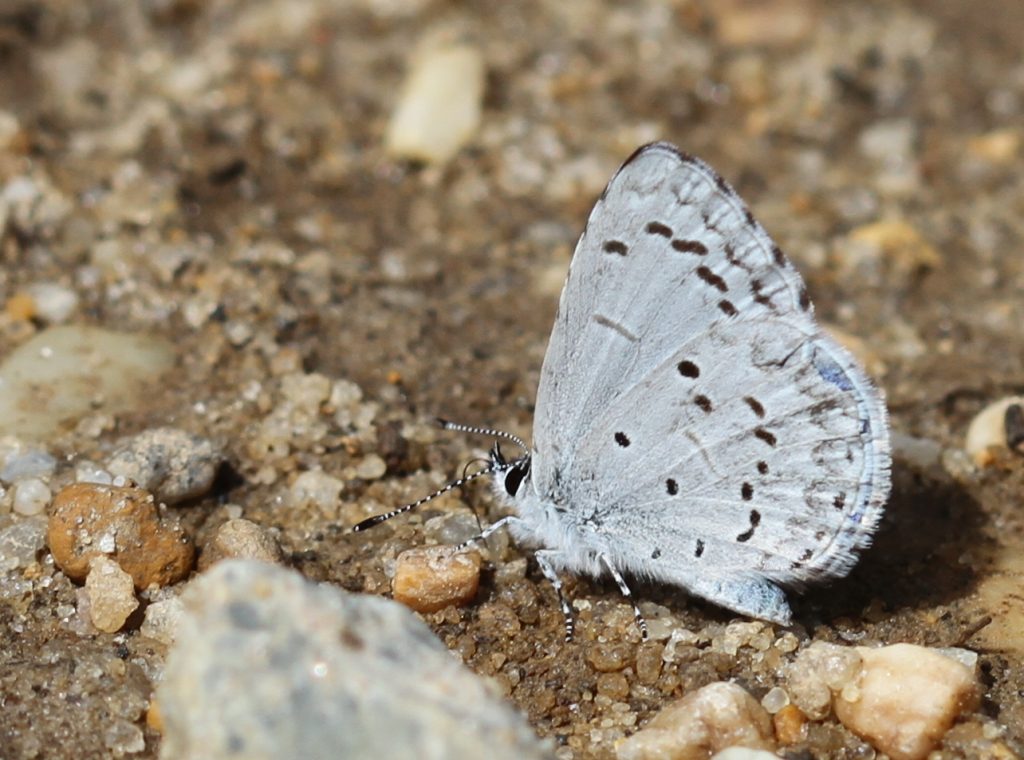 Dave Amadio opened the month with our FOY holly azure at Glassboro WMA on 4-1-16.

Have we returned to normalcy?  April brought us a weather pattern much closer to average than we experienced over the previous seven months — from September to the end of March.  September 2015-March 2016 was the 5th warmest fall and 5th warmest winter on record, and March 2016 was the 6th warmest March ever recorded (back to 1895; see chart below). New Jersey State Climatologist David Robinson has not yet released his report for April 2016, but it’s doubtful any records were set. The month felt like a “normal” April with a mix of conditions like those we often experience in early spring in South Jersey. We had rain during several of the opening days and again during the last few, but in between we had mostly sunny, dry days:  good for chasing butterflies, except when it was too cold or windy. The variability seemed typical for April.

Thirty-four observers contributed to a total of 290+ reports for the month, including two participants new to our project, listed in bold face below.  Welcome to the project, Lynn and Scott!

And thanks to everyone in our group who found time to post observations this month.

We recorded forty-one species for the month. Species new for the year (FOY) are in italics. 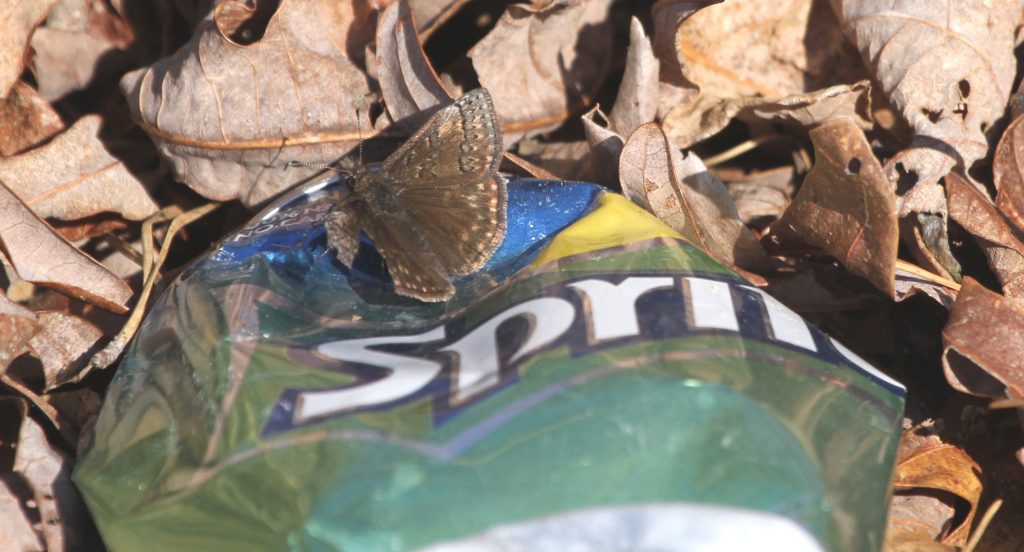 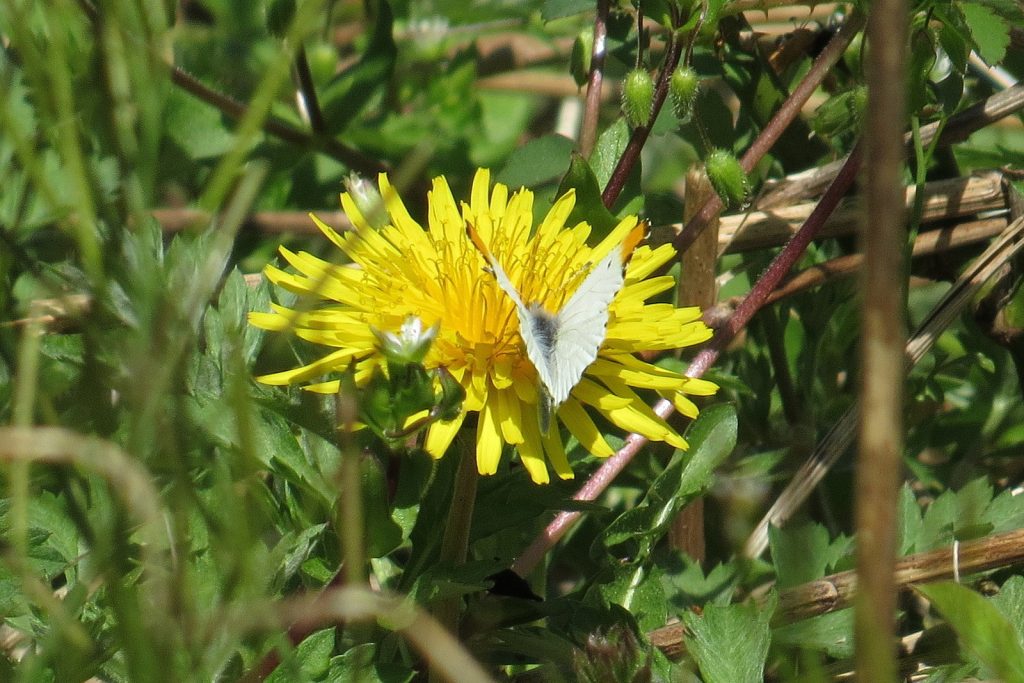 2016 seems our best year ever for falcate orangetip — reported in 7 of our 8 counties (all but OCN). Jennifer Bulava photo’d this one on Amico Island in BUR on 4-14-16. 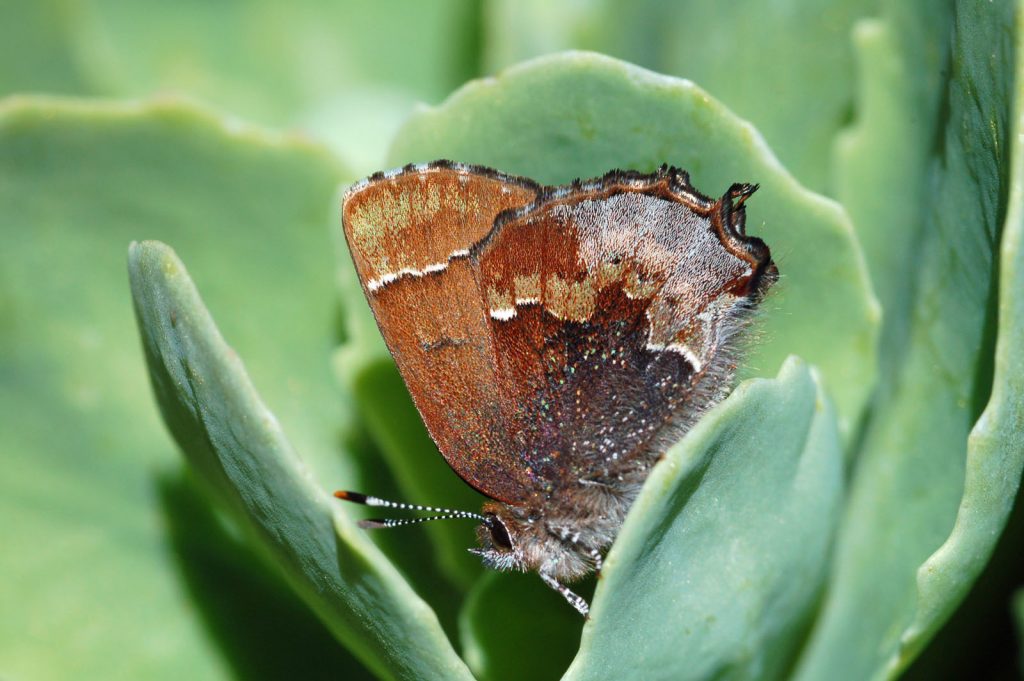 2016 might also be our best year ever for Henry’s elfin — with more than 60 reports for the month, including this beauty photo’d by Pat Sutton in her garden in Goshen (CMY) on 4-15-16. 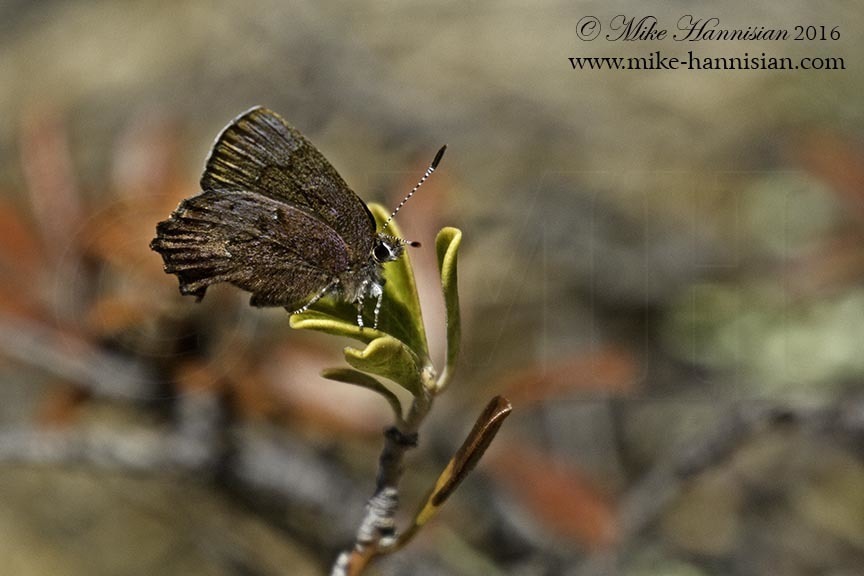 We had thirteen reports of brown elfin, at least one from 6 of our 8 counties (missing ATL and SAL).  Mike Hannisian photographed this one at Warren Grove, OCN, on 4-14-16. 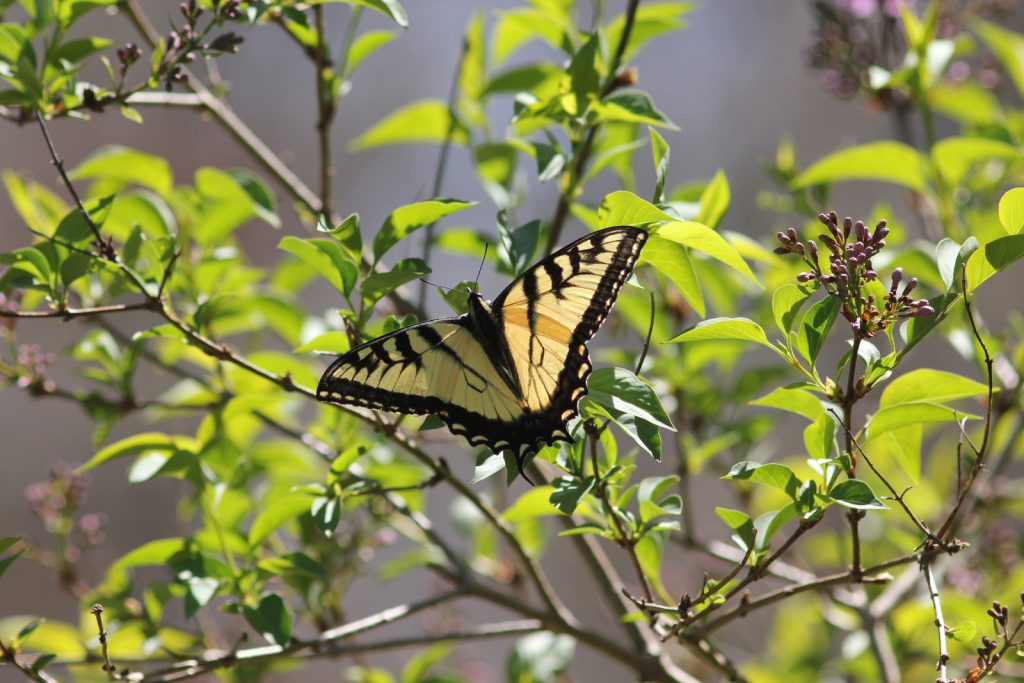 It was a good month for tigers — with reports almost daily and many pretty pix.  Dolores Amesbury took this one in her garden in Cape May Courthouse on 4-17-16. 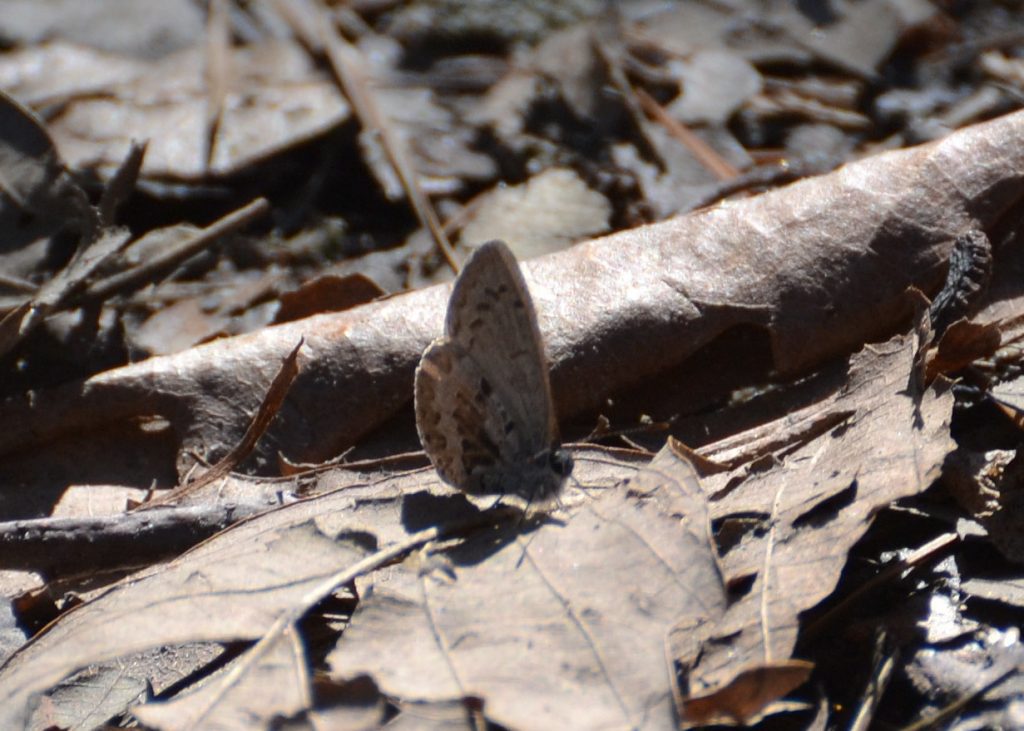 Blueberry azures still showing the “lucia” patch flew into mid-April, including this one photo’d by Claire Campbell at Black Run Preserve, BUR, on 4-14-16 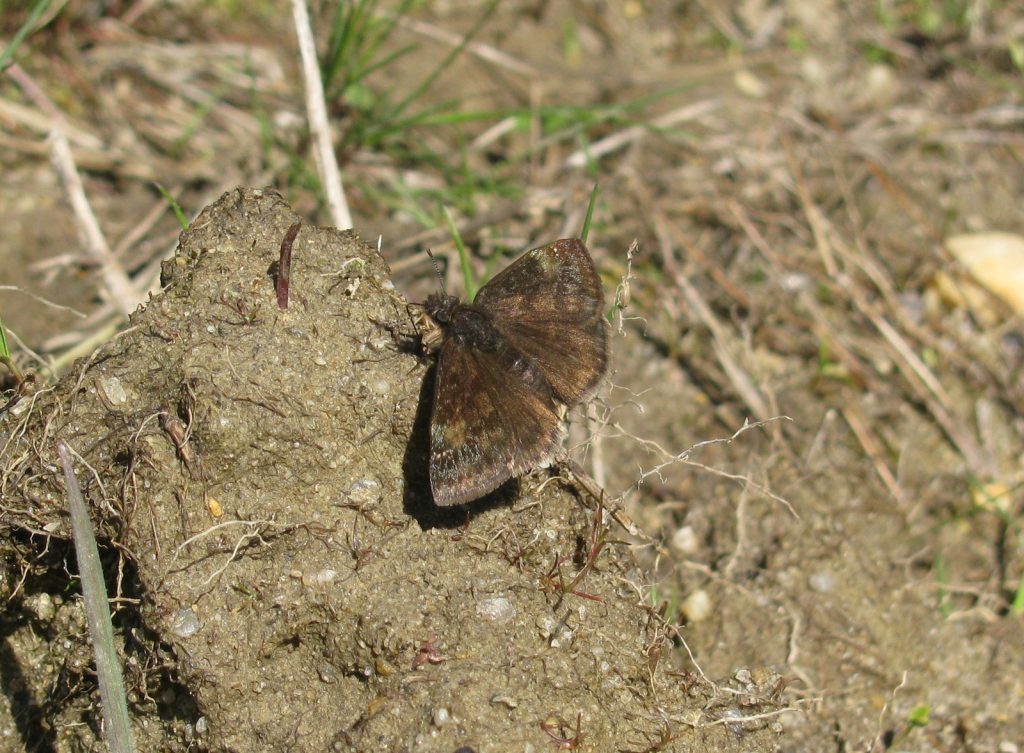 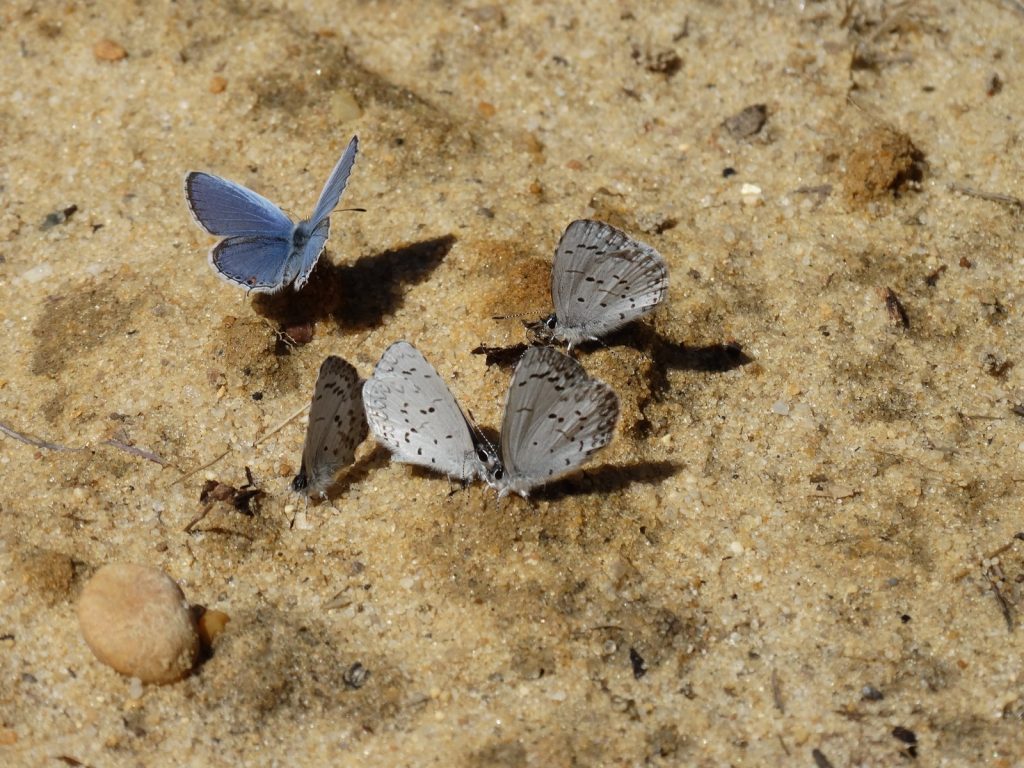 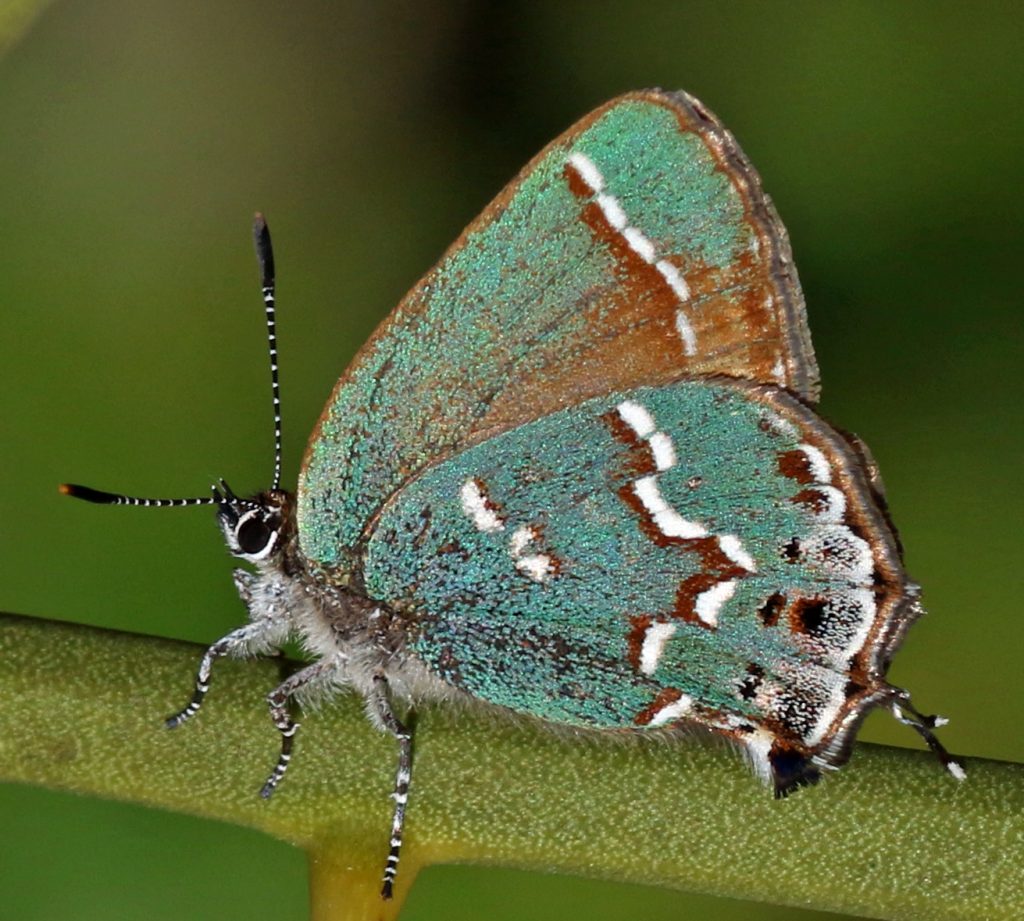 We had nine reports of juniper hairstreak, including this beautiful close-up by Harvey Tomlinson on Woodcock Lane, CMY, on 4-18-16. 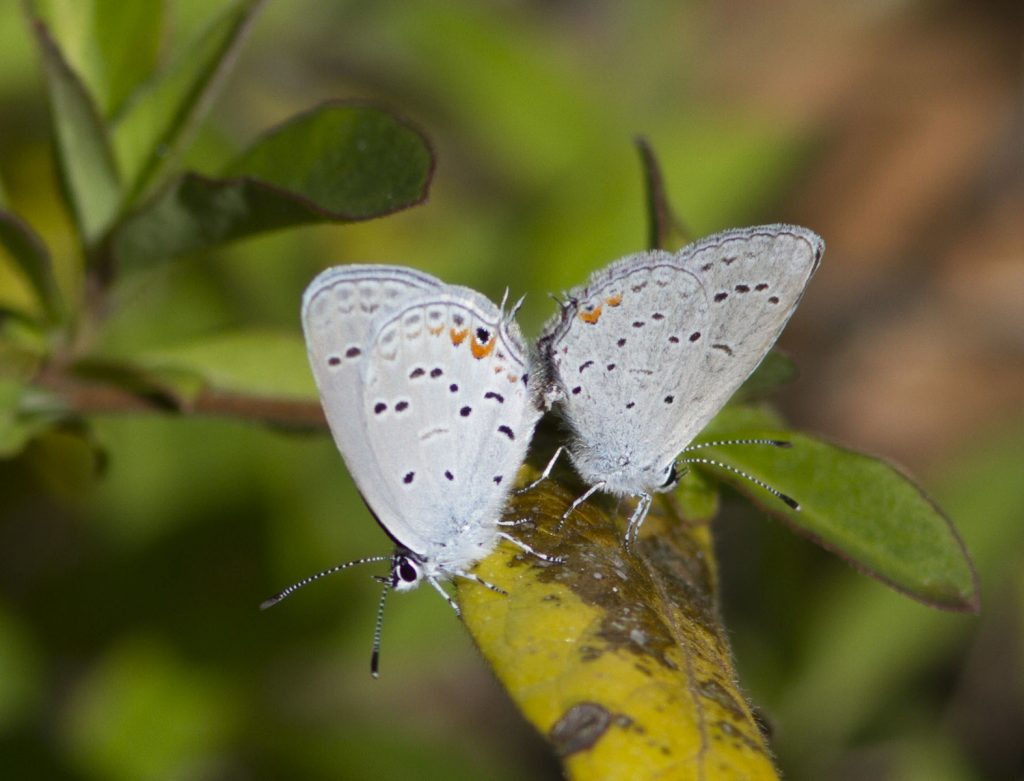 Eastern tailed-blues were reported throughout the month. Beth Polvino photo’d this pair in Cape May Courthouse on 4-20-16. 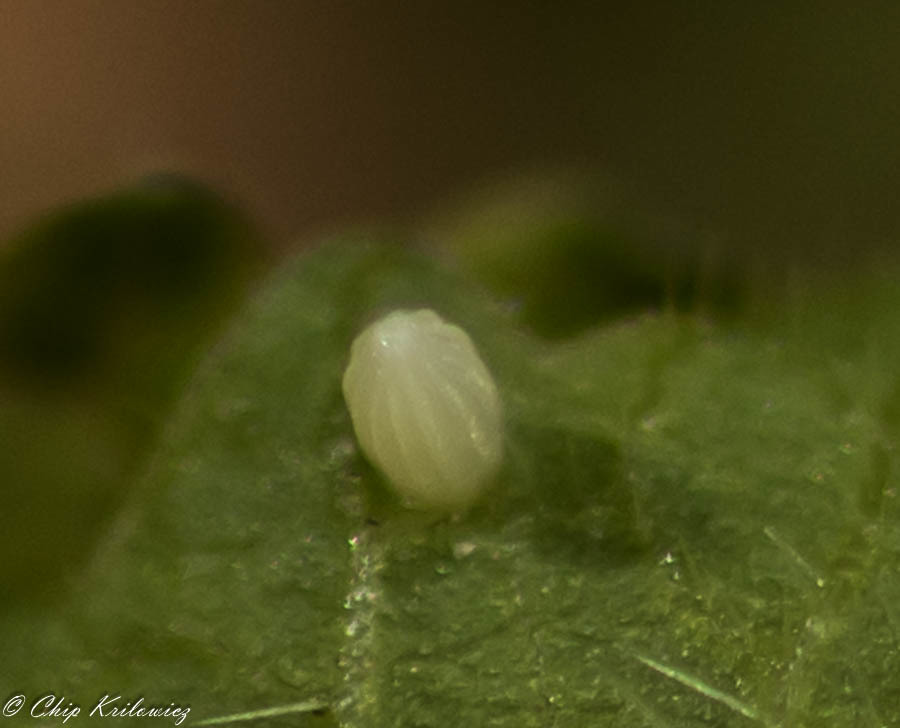 Several observers documented ovipositing with photos. Keep at that, everyone! Here’s Chip Krilowicz’s photo of a cabbage white egg at Pennypacker Park, CAM, on 4-22-16. 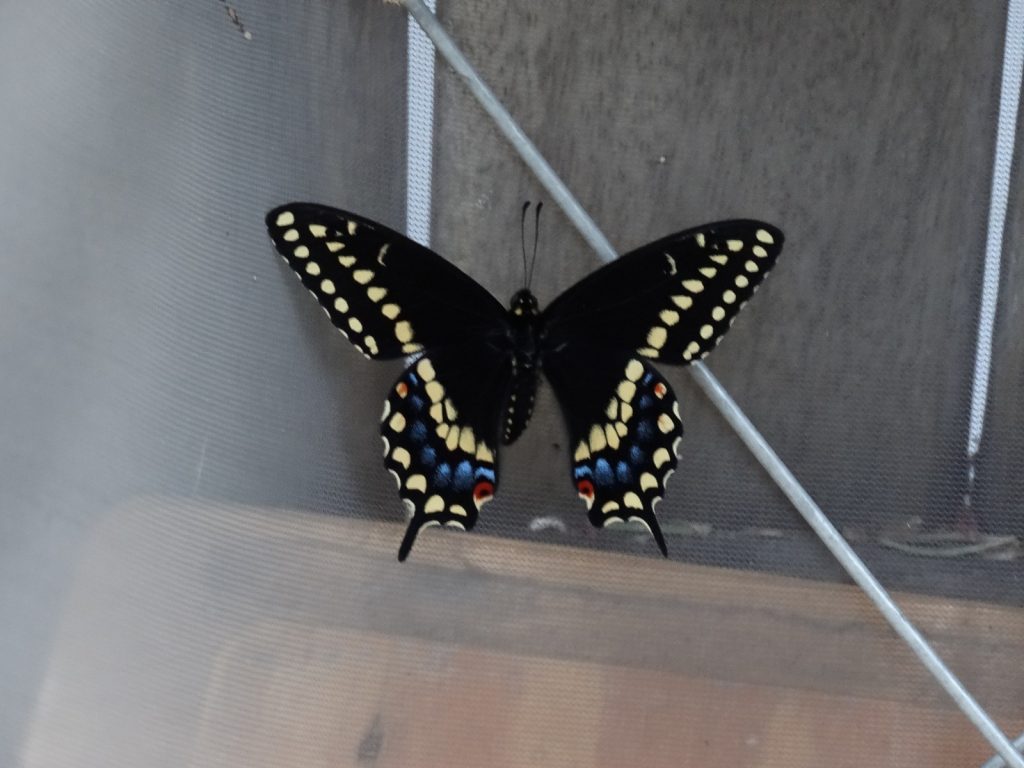 We had fourteen reports of black swallowtail, including this fresh male, which overwintered as a chrysalis in Chris Herz’s garden in Audubon, CAM. Photo’d on 4-24-16. 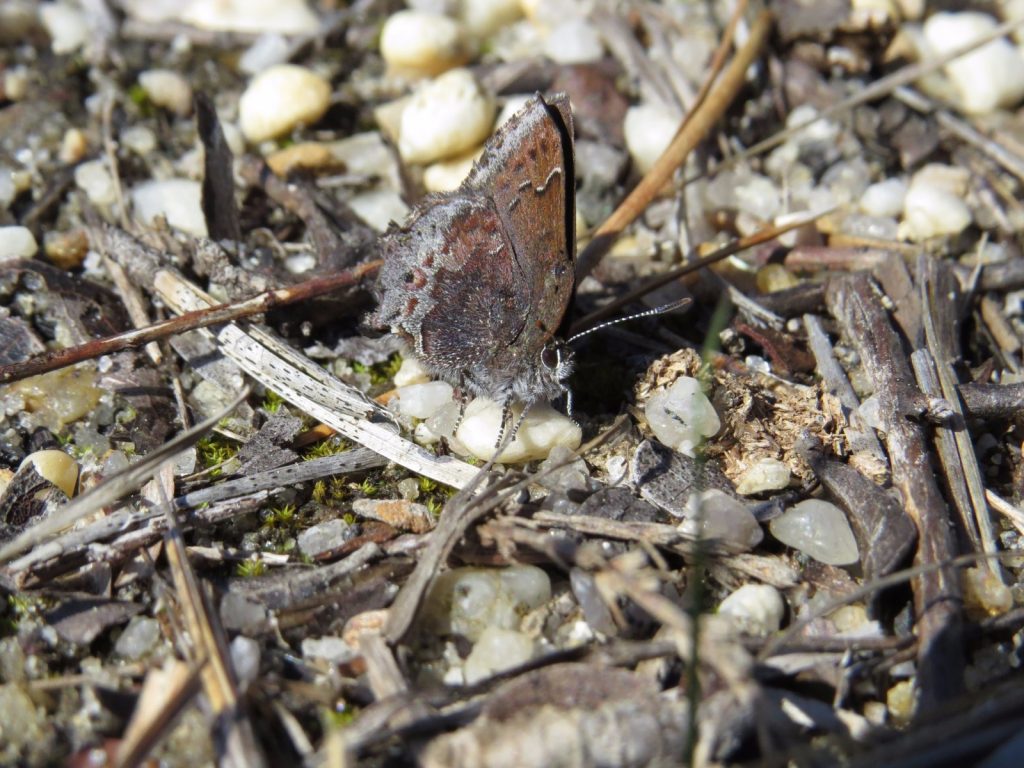 All four reports of hoary elfin came from their colony at Warren Grove. Tom Bailey took this evocative photo there on 4-24-16. 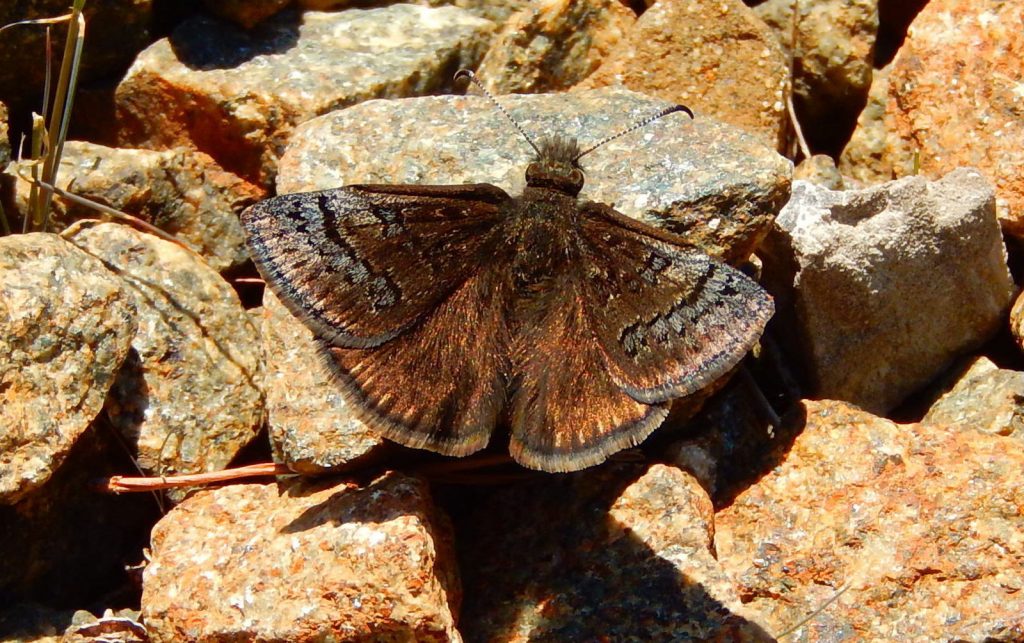 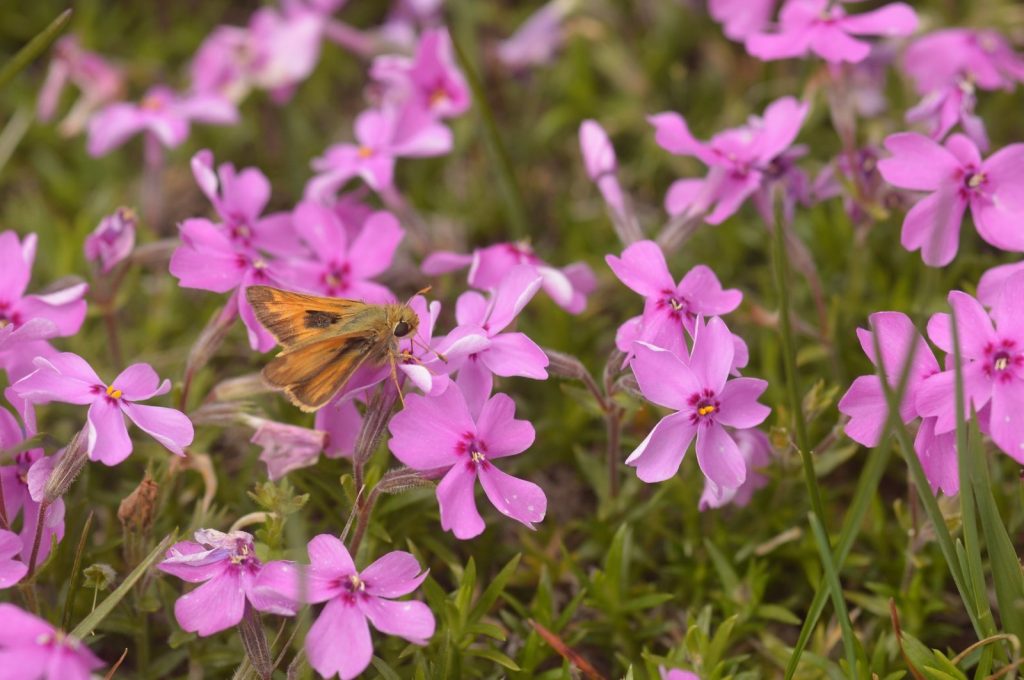 We had three reports of male sachems. all in the last week of the month, including this one captured in a pretty shot by Will Kerling in Cape May Courthouse on 4-30-16. 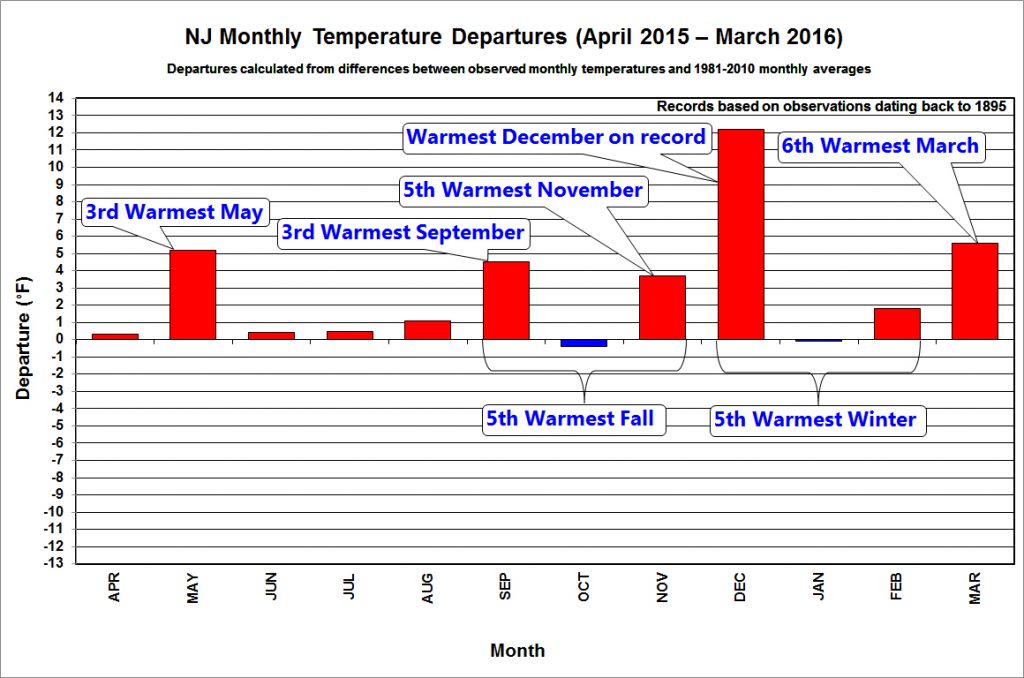 Graph from the Office of the NJ State Climatologist. (April 2016 not yet charted.)

This entry was posted in Compilations, Looking At Our Data. Bookmark the permalink.