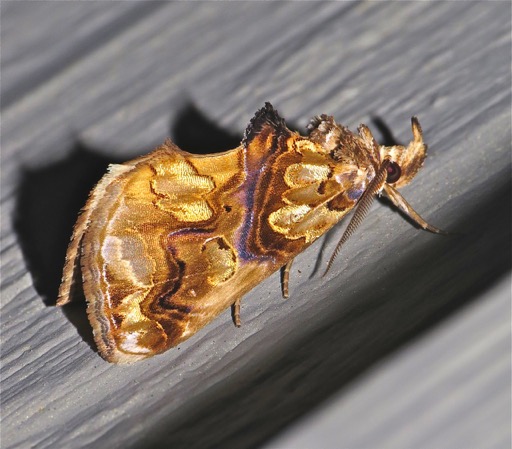 Plusiodonta compressipalpis, the moonseed moth, feeds only on moonseed vine (as a caterpillar). This one photographed by Wade Wander on 8-8-13 is one of two records he has for the species in the fifteen years of his backyard survey.

North Jersey environmental consultant, conservationist, birder, botanist, and butterflyer Wade Wander has been documenting the moths of his backyard in Fredon, Sussex County, for the last 15 years. Believe it or not, his total count for that single spot is now approaching four digits. So far he has identified 950 different species of moths and has another fifty or so (mostly micro-moths) photographed but not yet identified.

He has just finished assembling photographs of 900 of them on his Flicker site, which you can visit here:

Wade’s methods are so simple that you might feel tempted to try to see what you can find on your own back deck.

His total tool kit? A camera, a few special lights, and a field guide or two.

As evening falls, “I turn on my first floor outside lights which include a mercury vapor light, incandescent and fluorescent lights, and a black light. The mercury vapor and black light are self-ballasted and simply screw into my outside fixtures. I do not bait because of bears and other mammals, like skunks, that could be attracted to the sweet syrupy concoction. I do not use sheets as I have found that moths are readily attracted to the light-gray color of my house. That color also makes a less jarring background for photography than a white sheet.”

He documents all finds by camera, an inexpensive Canon PowerShot SX50 HS with a Raynox M-150 macro lens.

“The only ‘handling’ I do is to touch some species with a fingernail to encourage them to take flight and hopefully expose their hindwings. And I do not refrigerate specimens.”

He also restricts his surveys to PM hours. “I turn off my lights no later than midnight. I want the moths and other insects to go about their normal lives — which is not hanging around artificial lights all night long. Also, leaving lights on until dawn attracts jays and other birds that can gobble down many moths in just a few minutes.” 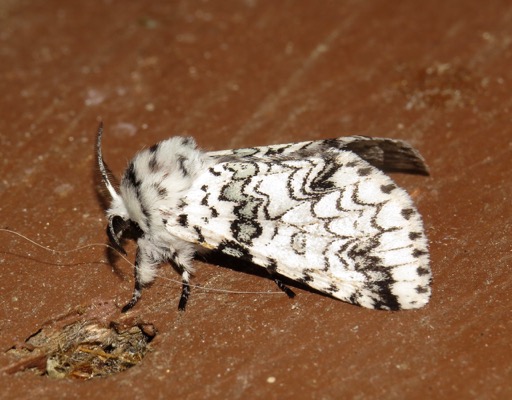 Cerura scitiscipta, the black-etched prominent, feeds on cherry, poplar, and willow. Wade has two records, this one from 7-20-15.

He pursues them year-round. “A few species can be found on warm nights in December, January and February. July is probably the month that has the greatest species diversity. but there are more than enough species from May through October to keep even the hardest-to-satisfy naturalist in clover.”

The bird artist John Yrizarry originally sparked Wade’s interest in the 1990s. “He kept regaling me about all of the moths he was drawing to the lights at his house in Orange County, NY, just outside Sterling Forest. My wife Sharon and I visited him several times and I thought that the habitats near his house compared favorably to those near our house, so I decided to give it a try in earnest in 2001.”

When Wade began the project, his primary identification reference was the 1984 Peterson Guide to Eastern Moths by Charles Covell (showing pinned specimens only.) “Now I use the newer [2012] Peterson guide by Beadle and Leckie and some terrific online sources, such as the Moth Photographers Guide website.”

He is unsure how much the habitat around his house has contributed to his success. “We won’t be able to answer that question until other folks I’ve interested in moths put in more years of moth work at their own houses.”

His property and nearby area certainly sounds ideal. He has a long list of woody vegetation, including oaks, hickories, maples, birches, black cherry, tuliptree, white ash, sassafras, hackberry, flowering dogwood, red cedar, aspens, black locust, white pine, spicebush, blackhaw viburnum, common winterberry, highbush blueberry, alders, poison sumac, and others in or near his yard. “There are also fields with native grasses, sedges, and forbs, and a lawn which is more ‘weeds’ than turf grass.”

Regular attention to the task also contributes. “Inventorying moths for at least a few hours almost every night helps.  I have found many species on just a single night in those fifteen years. Those might have been missed by sampling less frequently.” 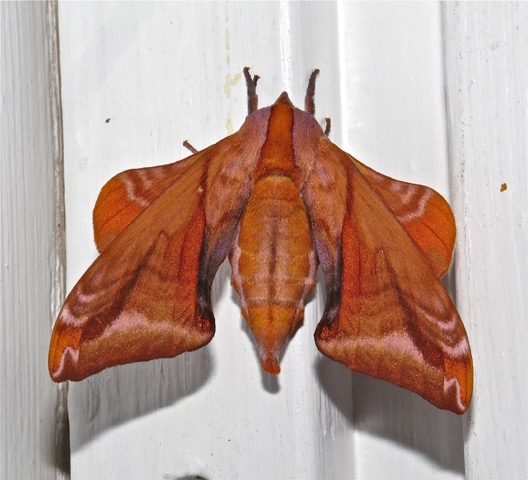 This huckleberry sphinx moth, Paonias astylus, photographed by Wade on 5-20-14, is his only record for the species. 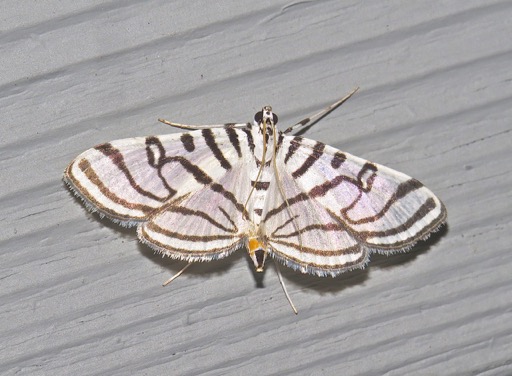 Conchylodes ovulalis has appeared in Wade’s lights just once in fifteen years (9-1-14). “It’s a southern species,” he notes, “perhaps only a vagrant in NJ.”

What percentage of all the state’s moths he has recorded so far is unknown — since the total number of moth species in New Jersey has not been determined.

Some moth-chasers estimate that there could be 2500 species in the state and perhaps 3000-plus. Wade takes a more conservative view, using the rule-of-thumb ratio often mentioned in the literature — that moths outnumber butterflies in diversity about 12 to 1.

“We have recorded about 125 species of butterflies in NJ over the past 15 years and that would yield a total of about 1500 species of moths during the same time period. To get up above 2500, we would need a ratio of more than 20 moths to every butterfly species. Possible yes, but unlikely in my view.”

He invites visitors to his website to notify him about any errors they might spot.
“Some photographs may be misidentified as I am far from an expert. Please ask folks to contact me with corrections.”

Most of all, he’d like to encourage others to try their hand at mothing. “It’s a terrific hobby for people who like a challenge — like grass skippers, sparrows, and shorebirds. And you can do it from the comfort of your own home. Moths are less predictable than butterflies and birds. You never know what is going to show up. Also, the lights attract many other nocturnal insects — which are also fascinating to learn.”

“Many people that I’ve gotten interested in moths claim that it has become a magnificent obsession. That’s a good way to describe it, I think.” 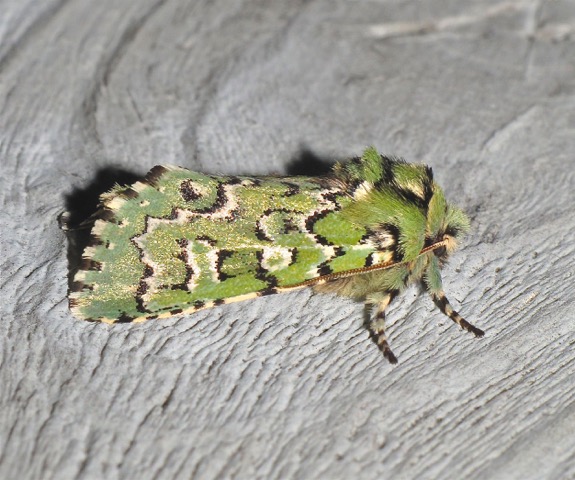 PS: South Jersey Butterflyers: some of you have conducted your own backyard investigations of moths, using methods like Wade’s or other methods. Please leave a comment below if you can contribute other tips or other information that might help the rest of us take up our own nocturnal investigations.

This entry was posted in Moths, Out-of-Area Reports. Bookmark the permalink.