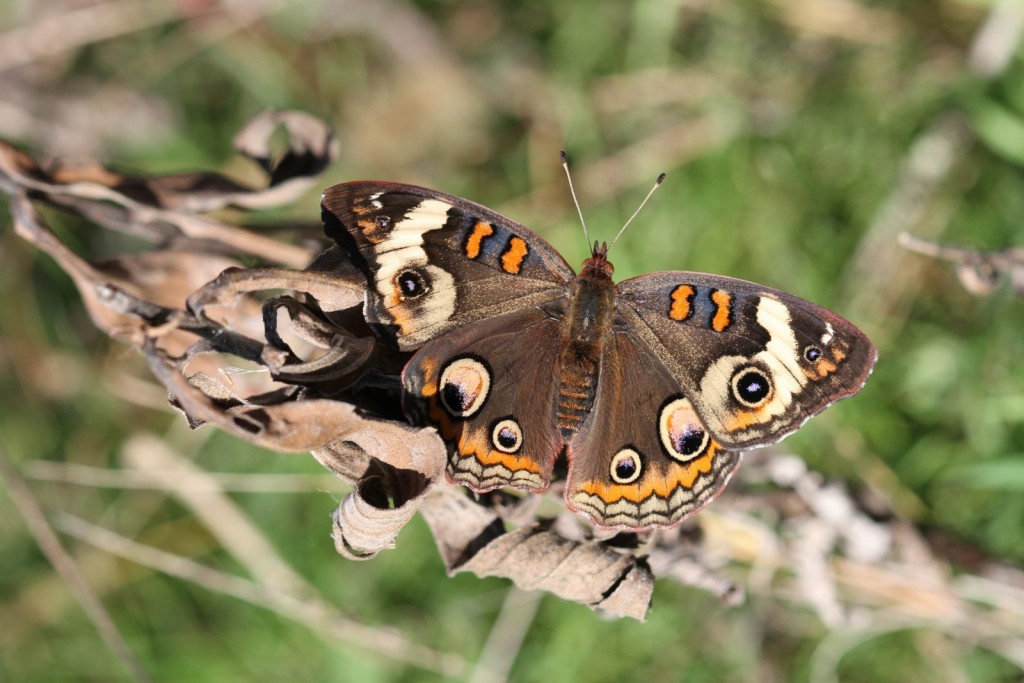 Dave Amadio photographed this common buckeye at Riverwinds Nature Trail (GLO) on 11-8-15 and points out that the red can be seen even on the upper-side of this individual. “Notice the HW fringe,” he writes.  “You can observe a hint of ‘rosa’ form dorsally. The color can be seen right up to the tip of the abdomen.” (Click to enlarge.)

So far, it’s been a good November for buckeyes.  Twenty-four of our first fifty reports of the month (as of today) included at least one buckeye — and we have at least one November report from seven of our eight counties (missing only a Salem report.)

As usual at this time of year, we are seeing a mix of colors on these butterflies, from individuals with tan ventral sides at one end of the spectrum to those at the other end, colored a rich, rosy red — and many intermediates.

Kelly C. Smith (then a graduate student at Duke, now a faculty member at Clemson) conducted a frequently-cited study in 1991 investigating the varying levels of red in the “fall” form of the species. He concluded that the red morphs were indeed a “seasonal polyphenism” — induced by the shorter daylengths and lower temperatures of late summer and early fall. The effect is cumulative throughout the caterpillar stage, especially in the last 24 hours of larval life (and the first hour of pupation). He raised caterpillars in a lab and demonstrated that both temperature and daylength contribute to the effect — and that either can produce the red on its own. 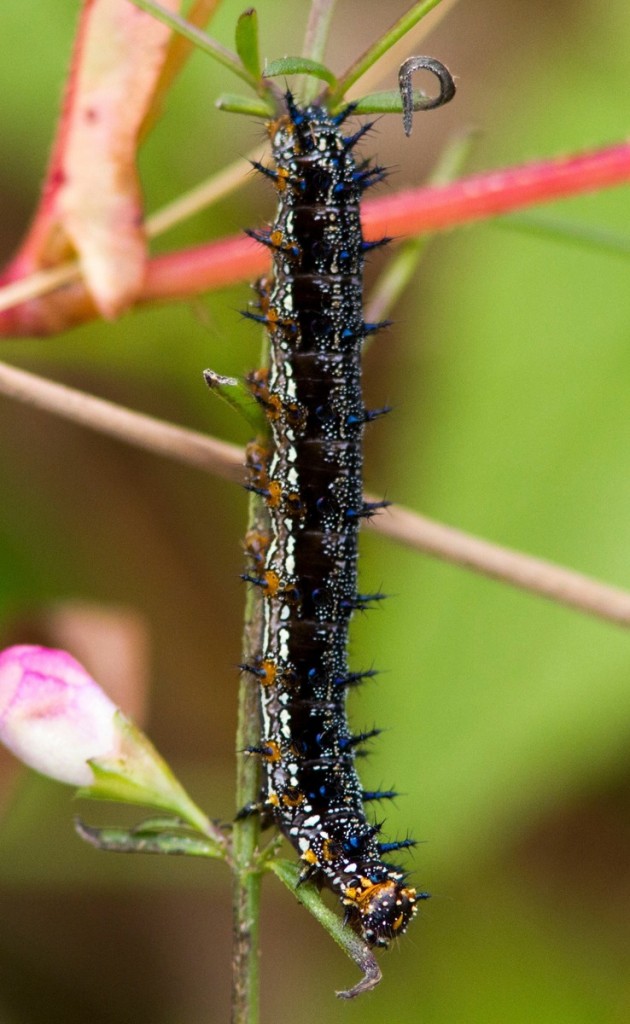 A late instar buckeye cat photo’d by Beth Polvino at Cape May Point State Park on 10-8-15, just when lowering temperatures and shorter daylength will have the most effect on the colors of the adult-to-be.

Smith points out in his article that that “tan” (summer form) and “rosa” (fall form) is not an either/or situation. Focusing on the ventral hindwing [VHW], he distinguished  adult buckeyes without any red (the “non-linea” morph) from those with at least some hint of red.  He then differentiated five different levels (or morphs) of “rosa expression.” From lightest to deepest red, the “rosa” forms include:

His article includes only one photograph, however, so the labels mentioned below are somewhat speculative. 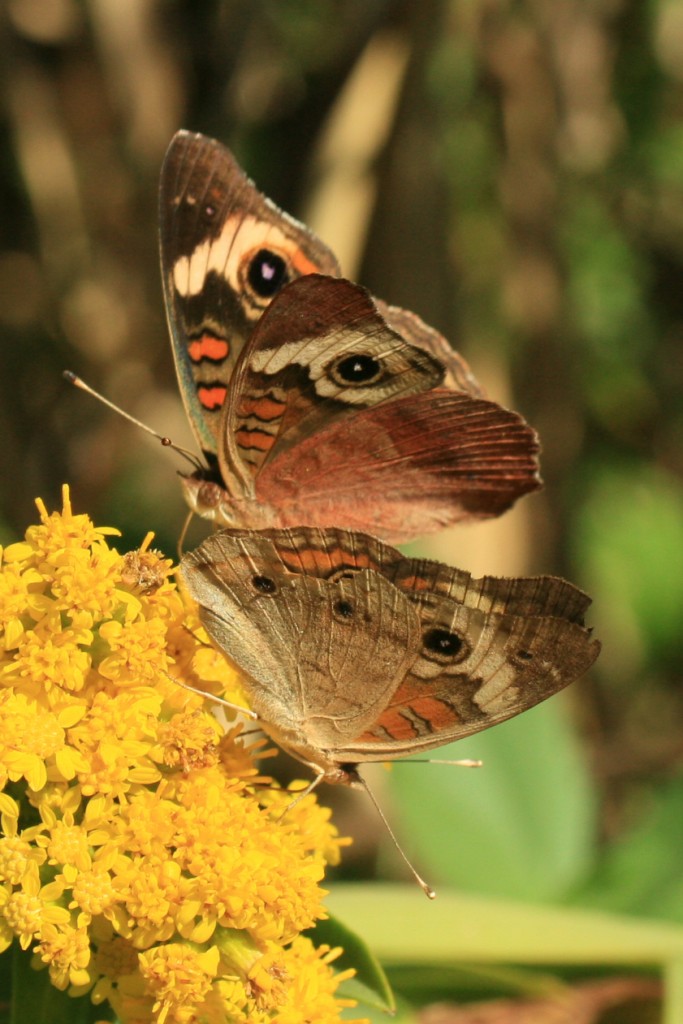 These two different morphs nectaring on seaside goldenrod were photographed on our field trip to Heislerville, led by Jack Miller, on 10-7-15. The top individual may be a “dark intermediate”; the lower one looks like a non-linea, i.e. a “tan” or “summer” form. 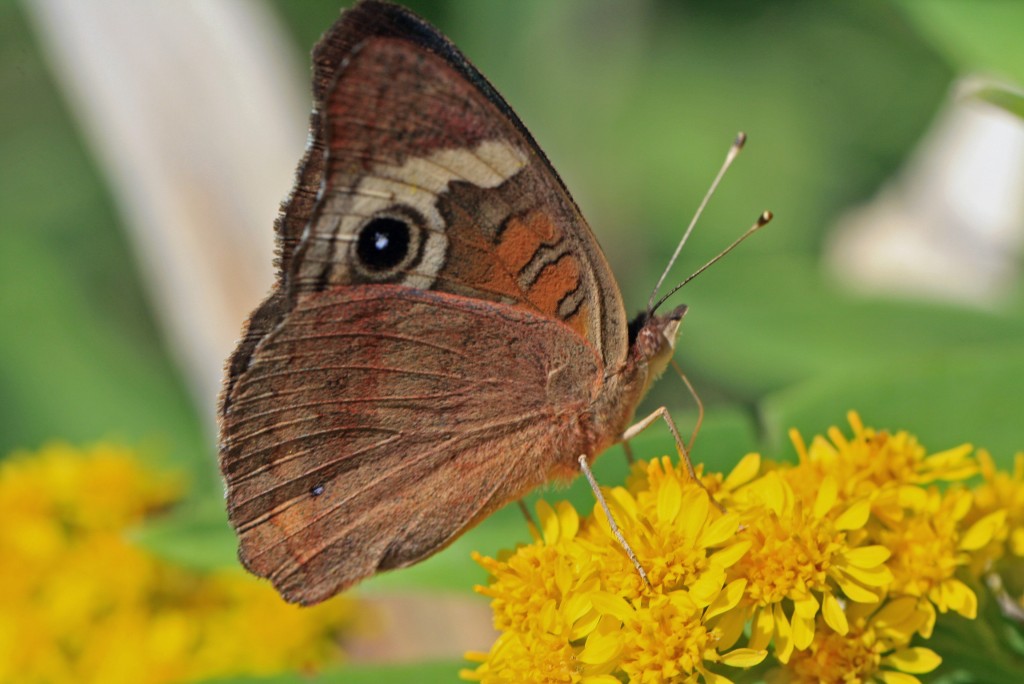 Another individual from our Heislerville trip. “Linea” or “light intermediate”? 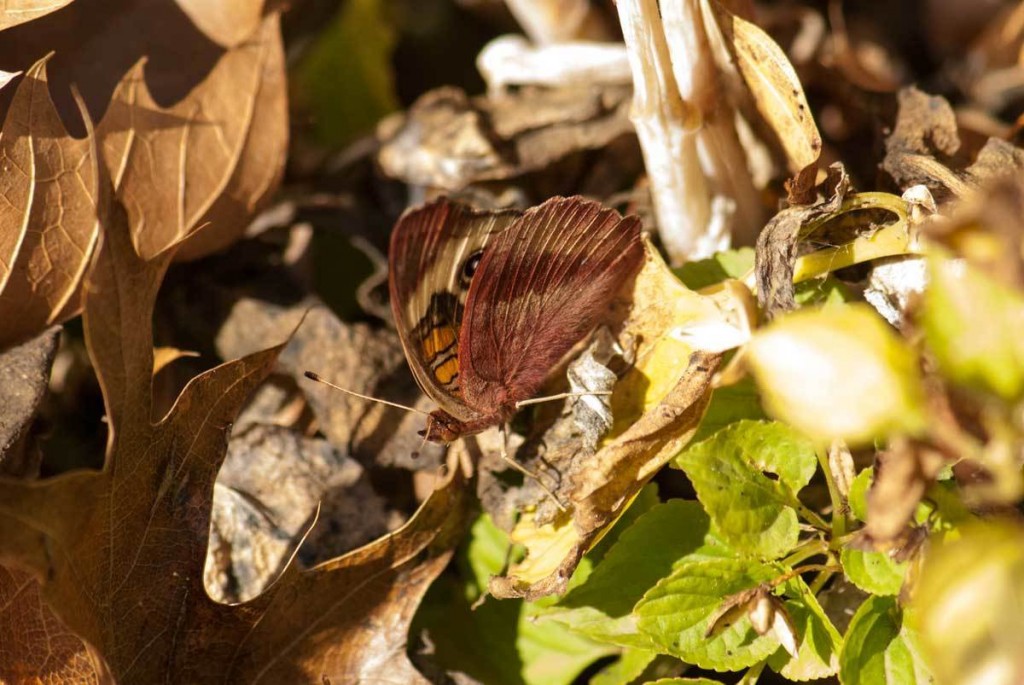 Perhaps Smith would call this individual photographed by Chip Krilowicz in Haddonfield (CAM) on 11-9-15 a “dark intermediate” — or is it a “rosa”? 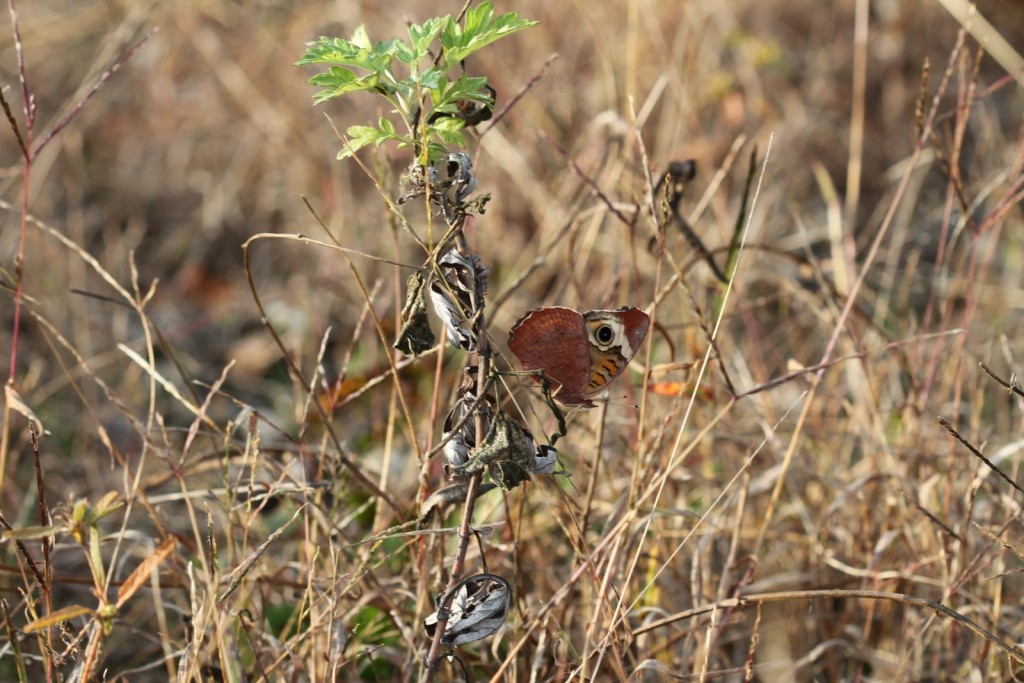 This buckeye photographed by Dave Amadio at the National Park dredge site (GLO) on 11-6-15 may be a “rosa” — if it’s not an “extreme rosa” (See below.) 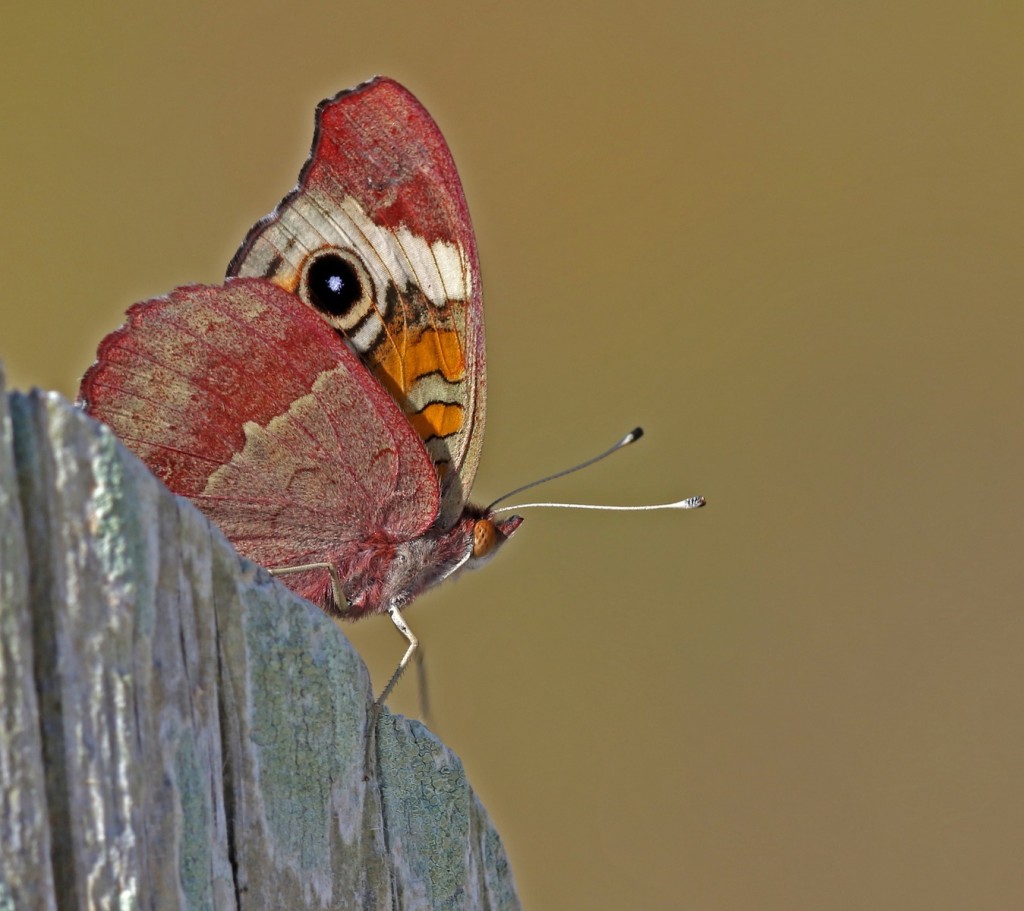 This buckeye photographed by Harvey Tomlinson at Cape May Point State Park on 11-4-15 would perhaps be classified by Smith as either a “rosa” or an “extreme rosa.”  Note the red on the fore-wing’s ventral tip.  That fore-wing red can also be seen in Dave Amadio’s National Park individual above. 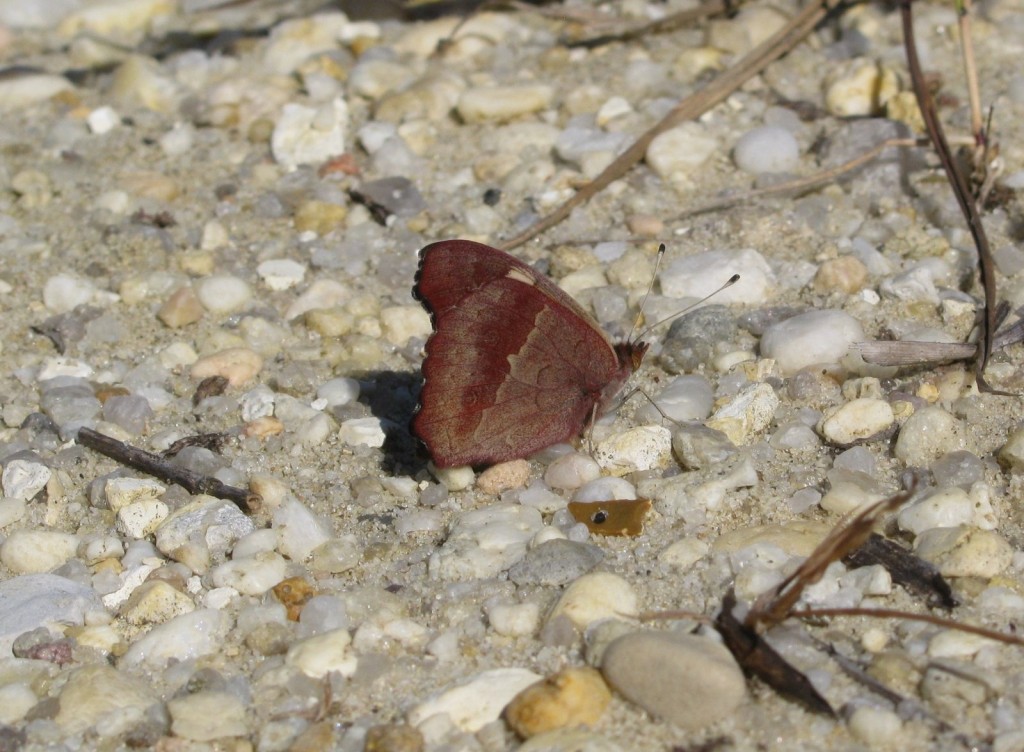 The reddest individual I could find among our group’s recent photos.  Steve Glynn photographed it in Cape May on 10-21-15.  It seems to show the deep red/purple of Smith’s “extreme rosa.” Here, the eye-catching deepest colors on the fore-wing and mid-hind-wing band seem close to purple.

Again, the categories proposed above are tentative and included only to encourage a close look at these photos — and perhaps a closer look at any buckeyes interested observers come upon the rest of this month or next fall.  (Also, Smith’s describes a spectrum, so some individuals will fall in-between his five categories.)  Readers who have different interpretations of the forms and photos above are invited to “Leave a comment” below or send an email.  Any photographers who have shots showing Smith’s spectrum more accurately (or forms not well-represented above) are urged to send them along.  They will be added here or in an additional post.  It would be fun to have “The Complete Collection” on our blog for future reference.

Smith noted at the end of his article that he knew of no explanation of “the evolutionary ecology of rosa” — what adaptive advantage the red coloring gave to individuals who showed it.  A short search for more recent research into that question came up empty.

To read K.C. Smith’s full article (published in 1991 in the Journal of Research on the Lepidoptera) go here:

More Rosa Buckeyes…and a Question for Next Spring

This entry was posted in ID Challenges & Tips, Links to Research Articles, Nymphalids. Bookmark the permalink.