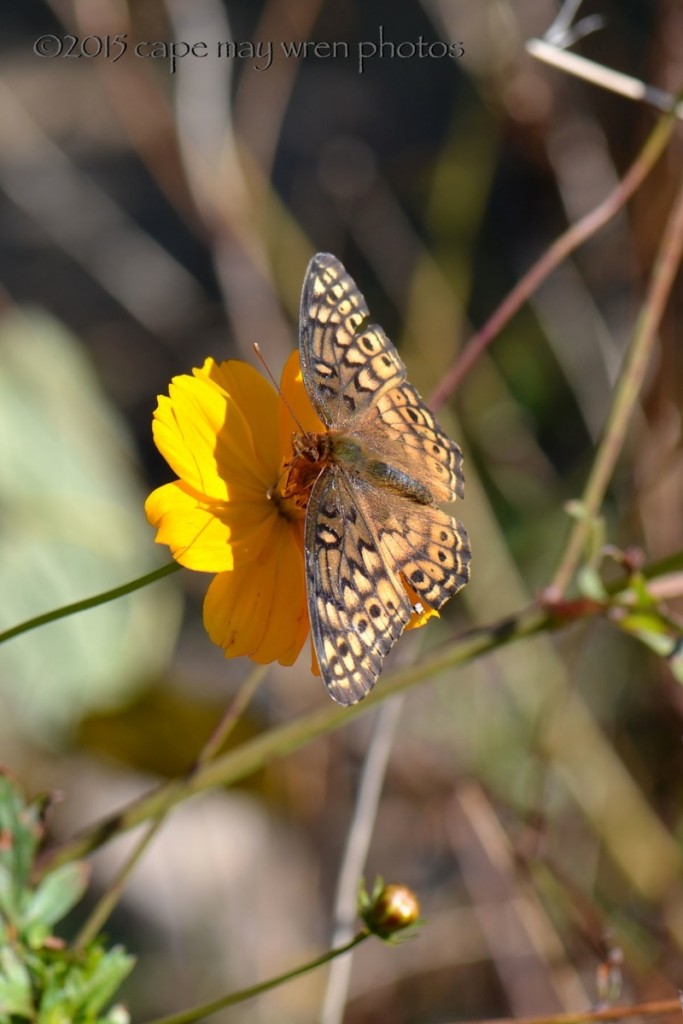 A variegated fritillary, photographed by Amy Gaberlein in the Triangle Garden at Cape May Point, 10-17-15 — fueling up to cross the Bay?

Some migrant butterflies are so brightly-colored or so numerous (or both) that you can’t help noticing them when they are on the move:  monarchs, painted ladies, red admirals, cloudless sulphurs, and others.

At the other end of the spectrum we have Euptoieta claudia, the variegated fritillary — which is seldom counted in double digits and whose muted colors and low-level flight can lead you to forget it’s a migrant at all.

Lepidopterists have long recognized it is migratory in our area.  Arthur Shapiro noted in his 1966 Butterflies of the Delaware Valley, that it is only a “temporary resident  [in Delaware, Pennsylvania, and NJ], reinforced by immigration.”  Paul Opler and George Krizek in their 1984 Butterflies: East of the Great Plains mapped southeastern North Carolina as the northernmost population of the permanent range of the species.  They concluded that the individuals breeding north of that area, from Virginia to New England and the Great Lakes, were migratory — unable to survive through winter.

Climate change may be pushing the northernmost over-wintering populations our way, but the species has not yet been found in New Jersey December through March.  (It overwinters as an adult.)

On our South Jersey log we have recorded the species as late as November 18 and as early as April 10 (both dates in 2013). 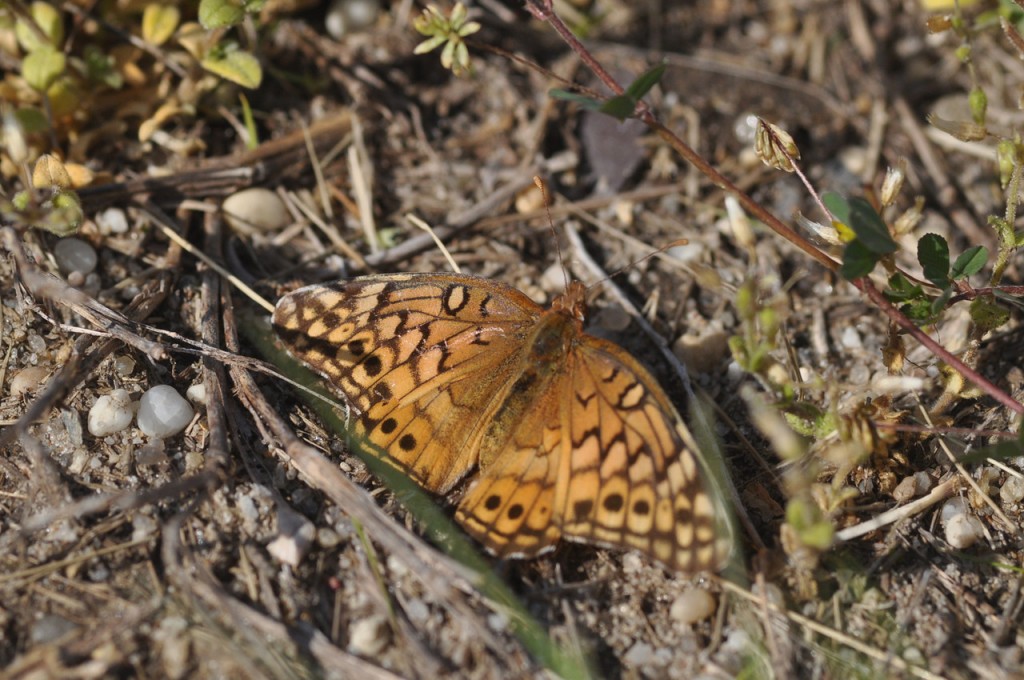 An apparent, north-bound variegated fritillary, photo’d by Will Kerling at Lizard Tail Swamp Preserve on 4-30-12 (our FOY that year).  The date, place, and wear (especially on left fore-wing) suggest it likely crossed the Delaware Bay.

Although the variegated’s numbers never compare to monarch or buckeye, the species’ fall migration seems to peak between mid-September and early October: 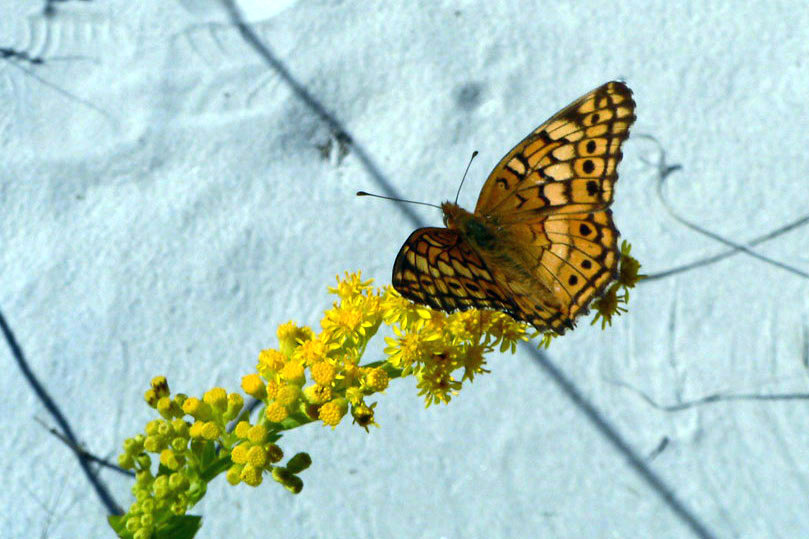 Apparent south-bound migrant photo’d at Cape May Point on 10-1-05. 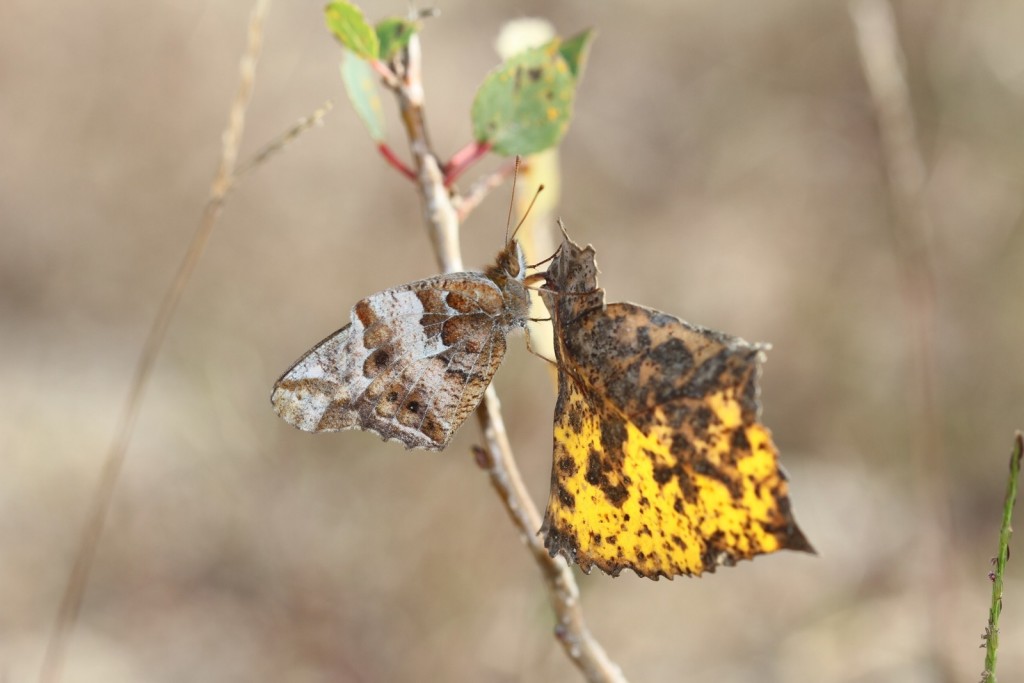 The autumn individuals photo’d above at Cape May Point on 10-17-15 and 10-1-05 and at National Park on 10-16-15 look fresher than the north-bound individual at Lizard  Tail on 4-30-12.  Individuals reaching NJ coming north in spring have crossed water and (in most cases) have probably flown much farther than those we see on their way out of the state in fall.   An adult wintering even as close as Norfolk, Virginia, for example, would have to manage a two-hundred-mile journey north to reach Cape May.

North Jersey NABA’s New Jersey Butterfly website (primary editor Jim Springer) reports that the species has increased in numbers in recent years in the northern half of the state: It “is no longer considered a species to shout about, even way up in Warren and Sussex counties. This northward range extension may be yet another example of the effects of our warming climate.”  (The link to that excellent site is available above.)

Will we soon find an over-wintering adult in southern NJ?

I don’t usually find this species in South Jersey until at least May [although we have] a number of April records on the spreadsheet. I think there is a strong possibility that in a mild winter a few may survive here. The Connecticut Butterfly Atlas states that after mild CT winters this species is sometimes seen in spring.

How the caterpillar hides itself so well is another mystery.  It certainly shows lots more flash than the adult. 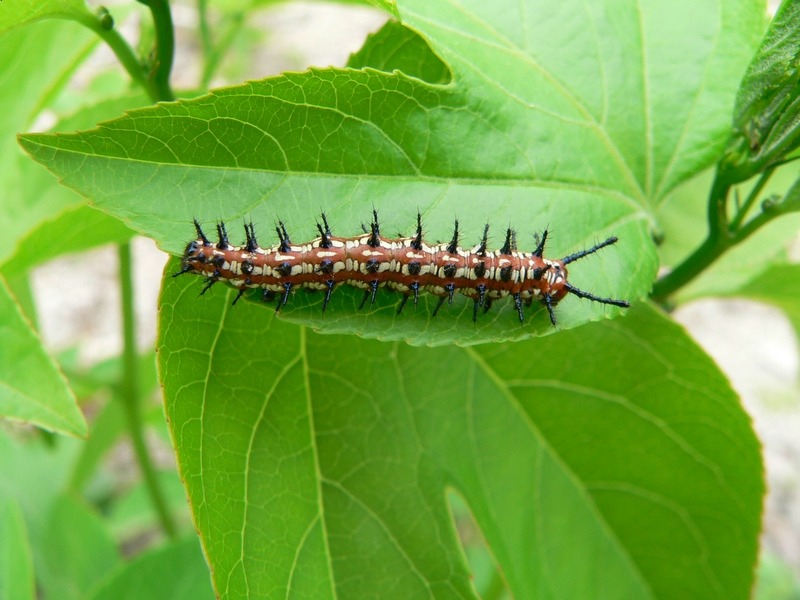 The chrysalis makes an even tougher find.  Despite his many years and hours of exploring, Dave Amadio has yet to find one.  “I would love to see a variegated frit chrysalis in the field!  An amazing jewel!”

In 2010 Amy Gaberlein managed to photo that jewel after a sharp-eyed discovery of a small caterpillar and then a couple of weeks of hands-on butterfly care:

In July 2010 I found a small caterpillar (possibly < 1/2 inch) in a pot of pansies on a porch of a business on New Jersey Avenue in Wildwood.  Brought it home and raised it on common violet.  By July 12th the caterpillar was good-sized and I photographed the chrysalis on July 17, then videoed its emergence on July 23.

The five photos below are by Amy: 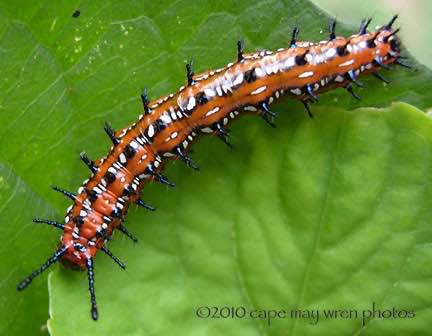 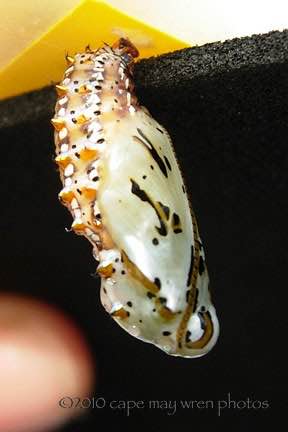 The chrysalis in mid-July. 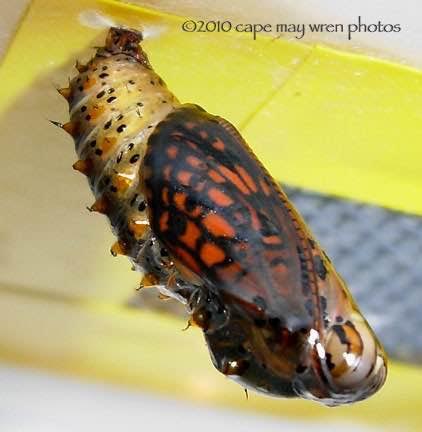 The chrysalis shortly before emergence. 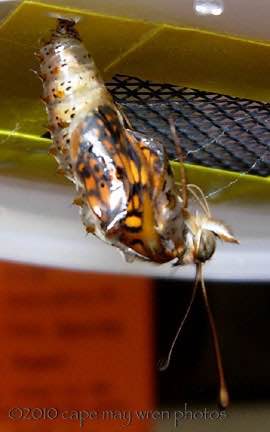 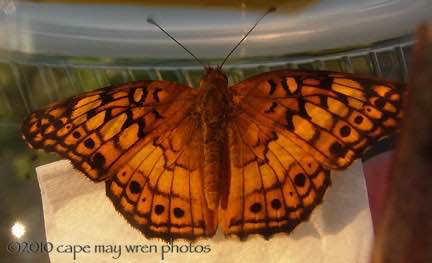 The adult drying its wings.

She released it in Pat and Clay Sutton’s garden in Goshen. “It flew up and away,” she remembers. “Never to be seen again.”