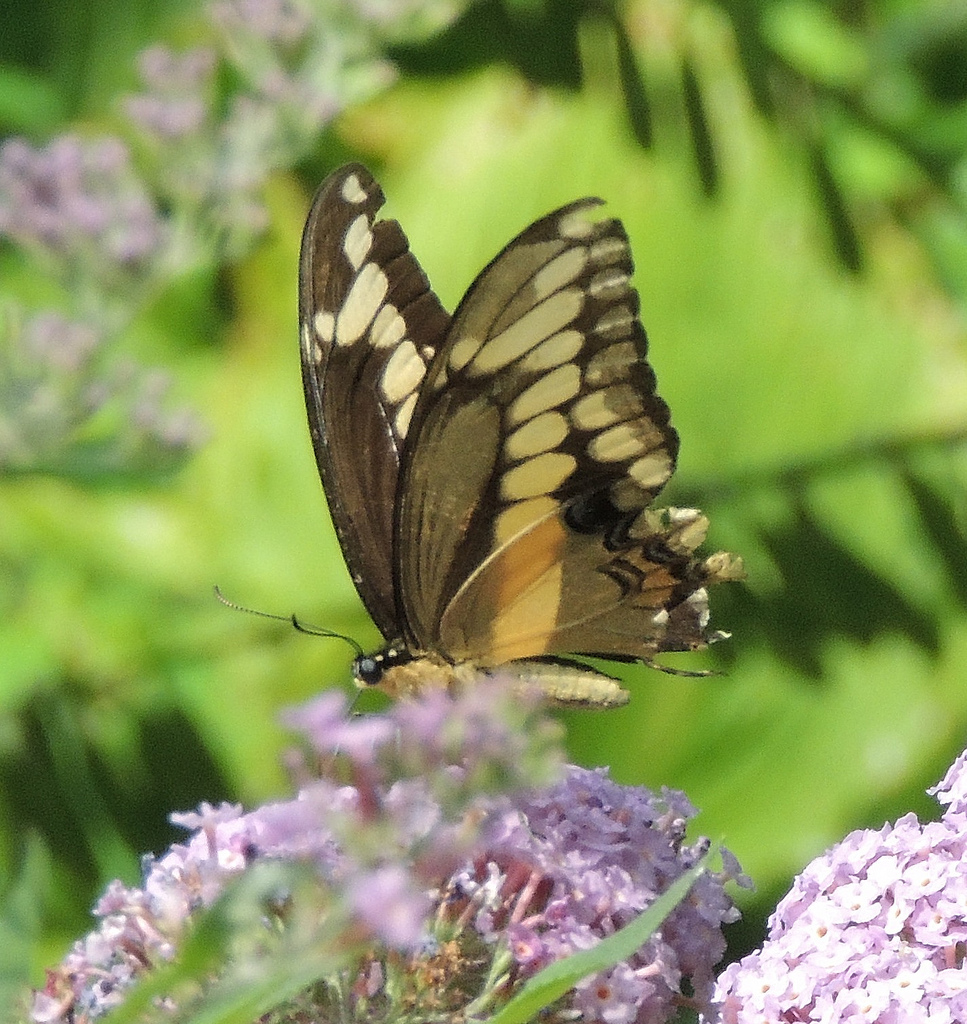 This giant swallowtail photographed by Ruth Cranmer in her garden in Mt Laurel (Burlington Co) on 8-31-13 was one of three found in August. Reports have now continued into September in what seems to be a mini-invasion of the species.

August 2013 was another very good month for butterflying in South Jersey.

We found 61 species during the month (one more than last August’s good count of 60). We also totaled 3680+ reports, topping last August’s excellent total of 3300+ and also topping all previous months of our log. In other words, we logged more reports last month than we have ever compiled before in any single month.

Here comes a lower number, but it may be another record total for us. We found and reported the non-adult stages of nine species in one month:

(NABA’s American Butterflies magazine has announced a photo project intended to document the caterpillar food plants of all North American species. See the Spring 2013 issue for details. And please keep reporting the non-adults you see in our area.)

Cloudless sulphur, one of those butterflies that seem to evoke August and September in southern New Jersey, had a solidly-respectable month with 106 reports of 330+ individuals in the month. Sachem, another species that evokes late-summer/early fall, had been having a ho-hum year in 2013, but high counts toward the end of the month suggest the fall brood of the species may be about to take over butterfly-gathering places as it does most Septembers.

Sachem was not one of the top two skippers for the month, however.   Can you guess the two most common skippers of August 2013? If you can name them both, you are one of those observers who are out in the field most regularly and sharply alert to our ever-changing populations.

One of the two is silver-spotted skipper, which is probably not a surprise: we had 212 reports, with a total of 1200+ individuals. But did you guess the other species? It is zabulon skipper which surpassed silver spotted with 218 reports and almost matched it in individual totals with 1100+ individuals reported (nearly double the zab total for August 2012).

Eastern tailed-blue and summer azure were the most common lycaenids, as usual in August, followed closely by red-banded hairstreak, and all three were among our top ten most-reported species (see below).

The most-reported nymphalid for the month does not usually lead its group: red-spotted purple with 101 reports, ~225 individuals.  Our three Vanessa species — American lady, painted lady, and red admiral — were in low numbers through the month, as they have been most of the year. The totals for common buckeye (76 reports, ~214 individuals) were down from August 2012 (89 reports, ~356 individuals).

Monarch numbers, which have been very low in a down year for the species, picked up just a little: 127 reports, 300+ individuals for the month. They are still below average for the month (in August 2012 we had 219 reports and 780+ individuals).

Our ten most-frequently-reported species for the month:

Thanks to each of you for participating and especially for those of you who have drawn others into our project.  Please keep at that — and keep exploring and reporting.

The full compilation for August 2013 in spreadsheet/pdf form is at the link below. Green – first of year reports, yellow = first of the month, blue = reports of non-adult stages. Bold print = totals for the month (most, not all, species have been totaled.) Hit the plus sign for easier viewing. If you want an Excel version, send me an email at nacotejackATgmailDOTcom.

This entry was posted in Eggs, Cats, Chrysalids, Looking At Our Data, Lycaenids, Nymphalids, Pierids, Skippers, Swallowtails. Bookmark the permalink.