The recent reports of sleepy orange, gulf fritillary, and fiery skippers on our log sent me searching for a term.

What should we call the apparently-doomed northbound flights we see most falls of those three species and also cloudless sulphurs, Ocola skippers, little yellows, long-tailed skippers, and two or three other rare but regular “southern strays”?

The migrations of monarchs, buckeyes, question marks, commas, painted ladies, and some other butterflies (red admirals? American snouts?) make sense. These insects apparently travel in both directions and at the right time of year: north in spring/summer and south in fall. Even if no single individual completes the flight from the northernmost end of the summer range to the southern wintering grounds and back again, the genes “for migration” do — they are carried along each step of the route by offspring of the travelers.

We can imagine how these instincts have been selected over time because the movements of the two-way butterflies roughly parallels the movements of birds, fish, whales, caribou, and other migratory vertebrates. Virtually all these migrants move toward longer days and warmer weather to breed, as temporary resources become available there. When the days shorten, the weather cools, and the resources that have fed them disappear, they retreat back toward their wintering grounds.

These migrations are seasonal, regular, and generally massive, sometimes involving millions of individuals of each species.

The flights of our “southern stray” butterflies are also seasonal, fairly regular, and sometimes massive (last year’s little yellow flight, for example). The animals involved are headed in the wrong direction, however — north in late summer/early fall, toward colder and shorter days — and, as far as we know, they do not return. Fiery skippers, cloudless sulphurs, and the other strays wandering up here from their species’ southern breeding grounds are pushing into territory where they cannot live for long.

None of these species successfully breeds in New Jersey (as far as we know). Their eggs must freeze or their young starve to death each winter. The genes they carry “for migration” also seem doomed. They cannot be passed along by the autumn northbound strays to grandchildren or later generations because the sons and daughters of the wanderers do not survive.

What should we call this kind of migration, and once we have named it, how do we explain it? Why do these butterflies keep coming our way? 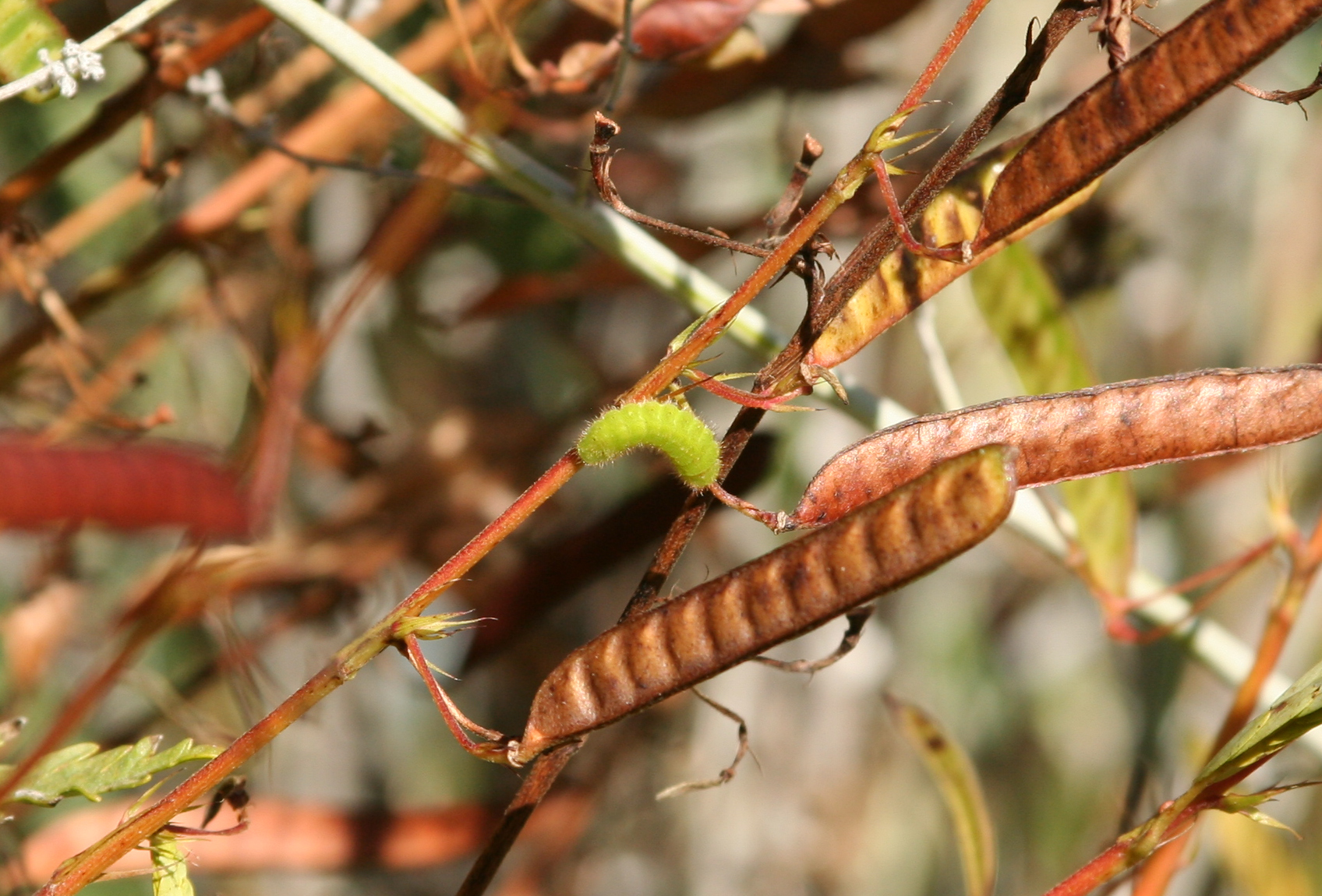 A young cloudless sulphur caterpillar attempting to feed on partridge pea in Port Republic, 10/11/08, a day or two before it disappeared.

My students tell me that all human knowledge now exists on the Internet and that everything you will ever need to learn can be Googled, but a long computer search failed me. I was forced to take shelter in a building students once recognized as the Stockton Library and thumb through a number of books until I came upon at least a partial answer.

Insect Migration, a 1995 compilation of papers edited by V.A. Drake and A.G. Gatehouse, contains several comments about “Pied Piper” migrants — in reference to butterflies and other insects, including moths, leaf-hoppers, grasshoppers, and others. Apparently, the term was coined by R.L. Rabb and R.E. Steiner in a 1978 article entitled, “The role of insect dispersal in population processes.” I haven’t yet tracked down that article (more time in the library required), but the second-hand discussion by various writers sounds like the term fits. Contributor S.J. Johnson, for example, notes that “Pied Piper” migrants show “no apparent southward return migration” and so “present a potential evolutionary dilemma [because] each successive generation in the southern region would be expected to have fewer migratory genes.”

Several other contributors touch on “Pied Piper” migrants, although none seems to dig into the subject. So, perhaps. what we have here a useful term for an unexplained phenomenon.

My students would happily point out that we can turn to the Internet for alternate plots:

Readers of this blog would be very much interested in hearing a full explanation or different terminology from anyone who’d like to offer them.

And, in the meantime, let’s study those autumn travelers as best we can over the next couple of months.

Keep at it, everyone!
jc 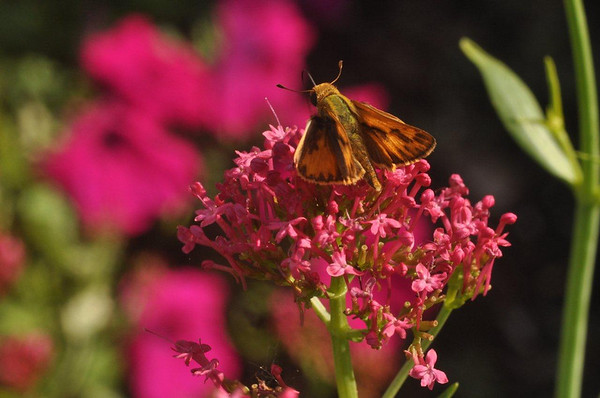 This entry was posted in Migration, Skippers. Bookmark the permalink.