[This post has been updated as of 5/29/20.  See Comments from Emile DeVito and Jack Miller below — and a link to Journey North with further information.]

Kathy Horn’s photograph above sparked a search for comments or other photos on the log of male monarchs arriving in April and May, when the species first reaches our area each spring.

Female monarchs are fairly easy to find in South Jersey in spring, especially as May nears its end.  Many gardeners with milkweed in their yards have seen their first monarch of the year fly quickly to the new shoots and immediately begin laying eggs.

How often has your first monarch in spring been a male, however?

The first arriving monarchs are most likely “Generation 1” individuals, off-spring of their long-lived parents that wintered in the Mexican mountains — the “Methuselah” generation.  That brood lives for eight months, emerging from chrysalises in late summer, migrating south in fall to over-winter in the Mexico, and mating there in late winter.  Some Internet searching failed to find information about the percentage of males vs. females that migrate northward back to the U.S. (anyone know a source?).  Female “Methuselahs” cross the border for a second time and lay eggs on emerging milkweeds in Texas, Louisiana, and other southern states in March and April.  Over the next six weeks or so those eggs hatch and the caterpillars emerge, grow through five instars, pupate, and emerge to mate and fly north themselves.  These are “Generation 1,” the first of the new year.

For details about the timing and migration strategy of all 3-4 annual generations, see the Monarch Joint Venture’s excellent website:

Our Sightings Log allows searches for photographs back to fall 2015 when we adopted the David Reese system.  We collected a couple of dozen reports of monarchs in April and May 2016-2019, but no observer mentioned seeing a male.  Of the eight photos of the species posted during those two months only one shows a certain male: 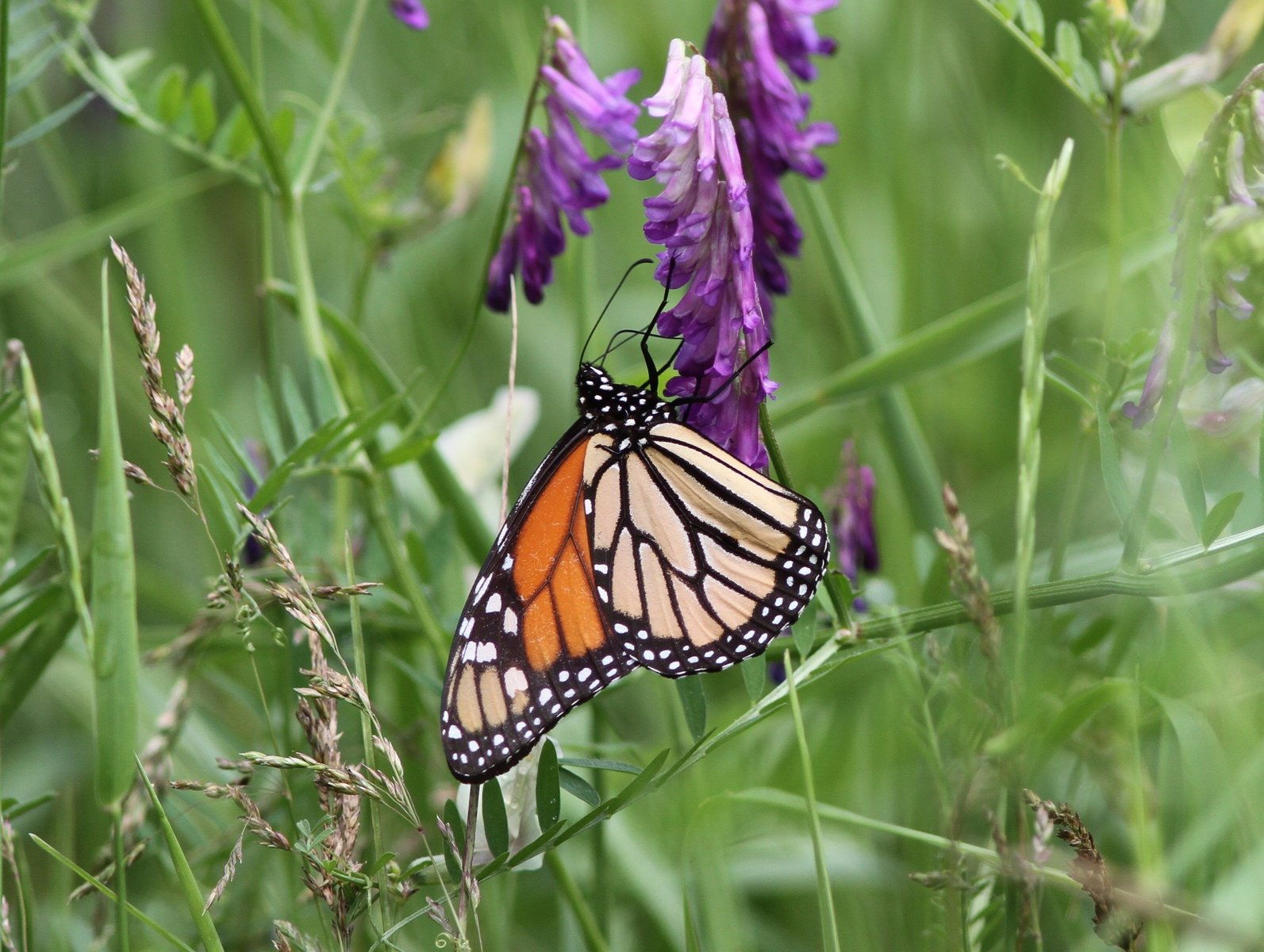 Males are most easily differentiated with dorsal views when their two bulging scent patches on the hind wings are generally visible, as in Kathy Horn’s photo.  Sexing monarchs from their ventral sides requires a closer look.  The scent patch on each hind wing creates a slight bulge to the vein that holds it.  Here’s a helpful image from Monarch Butterfy Gardener.net: 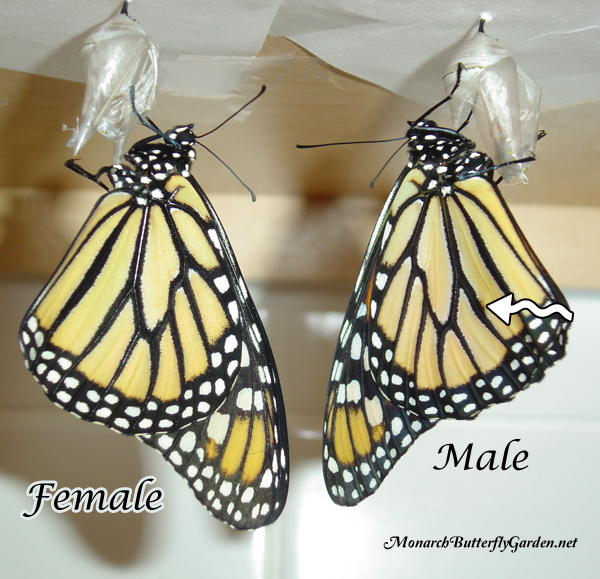 You can see this subtle difference by comparing Steve’s photo with Dolores Amesbury’s photo here: 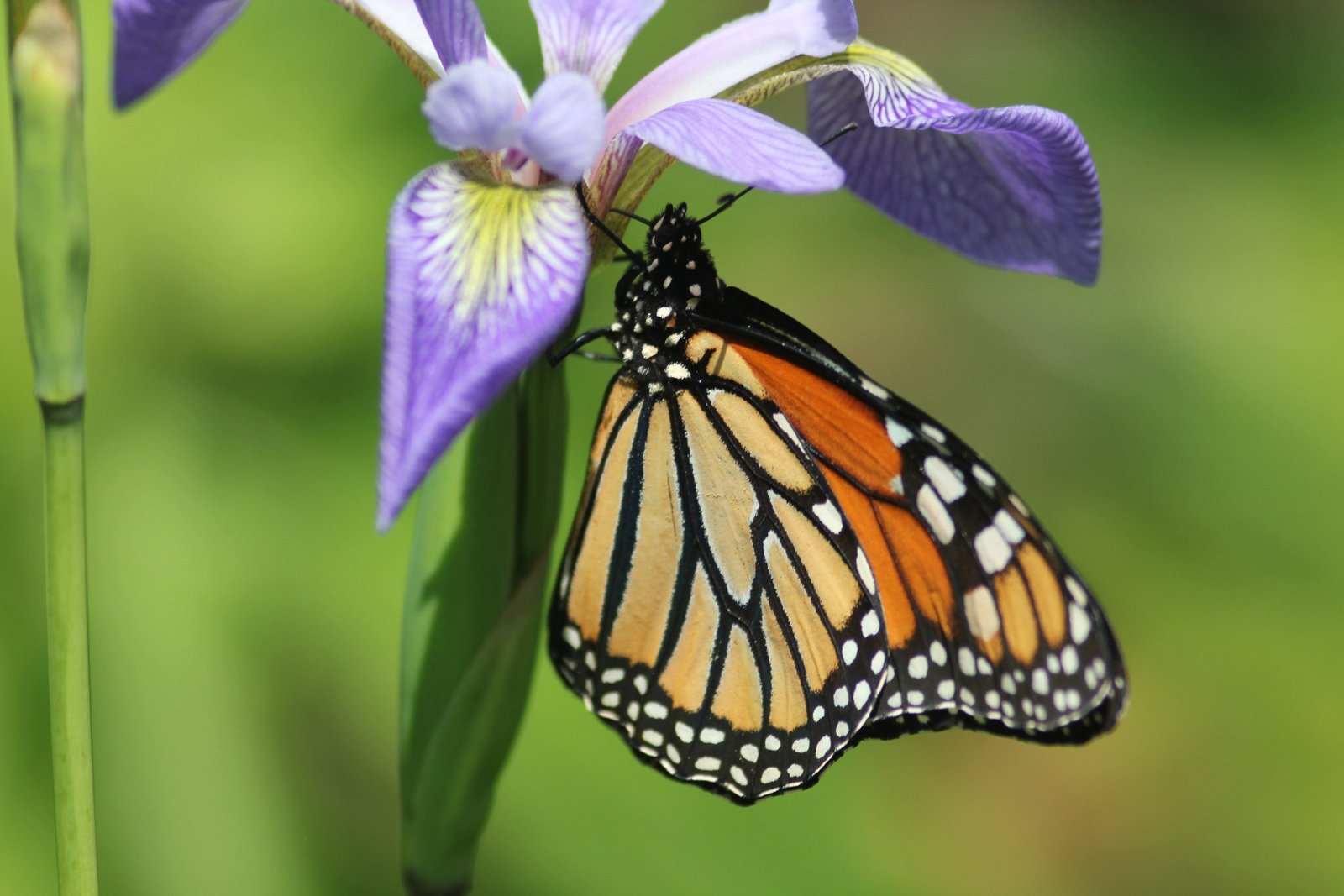 A female monarch:  no bulge evident in the distinguishing vein.  Photo’d by Dolores Amesbury in her garden in Cape May Courthouse, 5-29-19.

The lack of reports and photographs of males in April and May could very well be due to chance and our scant data. It might also simply be a consequence of females being easier to spot as they come to gardens to oviposit.

Still, it might be a real pattern, worth trying to track and document.  Could it be more advantageous for adult males of “Generation 1” to remain in the southern areas where they emerged and spend their energy chasing down mates rather than risk the migration northward? If they can fertilize females on their original home grounds, who will carry their DNA northward, why fly north themselves?

So, this post is a request for comments and/or photographs of male monarchs recorded before June 1 in South Jersey.   You may have some photos from that period that you simply did not submit to the log — or you may have shots of early males that date back to years before 2015.

Any comments or photos emailed to nacotejackATgmailDOTcom will be included immediately in updates to this post.  (If you would prefer not to have them posted, just let me know.)

NOTE:  the Comments tool below has been disabled by  spam-bot attacks.  Just email me and I will upload your comments.

Thanks to anyone who can contribute to this discussion!

“Who needs males? If the arriving females are fertile and laying eggs, presumably they mated farther south where the generation 1 adults emerged. There is no need for males to migrate north, IF and only IF they fertilize the females upon emergence down south. It would make evolutionary sense for ONLY the fertile females to have to continue the northward expansion, since then fewer individuals would need to succeed on the perilous trip. Only fertile females really need to come north, UNLESS they have to mate here just before laying eggs. Can they store sperm like female rattlesnakes, and make the heavier eggs when they get here?”
Thank you, Emile!  Your comment inspired a little more Internet searching and a find of the page linked below from Journey North, quoting Dr. Karen Obenhauser who has been studying monarchs since 1985.  She notes that females can store sperm that remain viable for several weeks and that her studies using mark/release/recapture have found that females generally disperse more quickly from their original place of emergence,
“We rarely recapture females in the same locations in which we release them. However, we recapture about 15-20% of the males if we go back to the same area one to four days later. This suggests that females are leaving the areas, while many males remain longer in the same location. Males tend to patrol an area–leading to their being recaptured more frequently in the same locale. In contrast, female flight appears to be more directional. Females are captured less frequently because they do not remain in the same area as long. Rather, they cover more area in their lifetime, probably in pursuit of milkweed.”
That suggests males are more likely to remain behind while females migrate away.  However, she also notes,
“When females mate multiple times, most (but not all) of the eggs they lay are fertilized by sperm from the LAST male with which they mated.”
That suggests, it would seem, that there might be an advantage to a male flying north to NJ to mate with a newly arriving female.
Karen Obenhauser on Male vs Female Behavior
So, the question has complications, which makes it more fun, imho!
jc 5/27/20
from Jack Miller, 5/29/20:
“It makes sense that males might lag behind to greet and mate with arriving or emerging females.  This strategy would be more efficient than flying north and hoping to find milkweed patches where females are present. I have noticed that females in May will often only spend minutes at my yard’s milkweed patch. Later in the summer, they will hang around for hours.  I wonder if the summer bugs were tagged or had significant identifying wear marks if we would find that they might stay for days?  I will pay more attention to that this summer.
Where do the males come from that fertilize eggs for future generations as monarchs continue their northward migration?  Do males live longer?  Do southern males eventually fly north to arrive in time to mate with emerging next generation females?  Do next generation males eclose before next generation females?
Almost all of the May and early June monarchs I have seen have been flying due north as fast as they can unless there is a milkweed patch; therefore, there are few opportunities for photos.  It is not surprising that we have so few photos of early season monarchs in our log.”
Jack Miller
Thank you, Jack.  More questions to try to answer about this butterfly, even though it may be the best-studied butterfly in North America.
jc

PS:  Anyone who would like to try their own hand at finding a male in our other photographs of monarchs, April to May, 2016-2020, can go to the relevant log reports here (corrections will be welcomed):

This entry was posted in ID Challenges & Tips, Looking At Our Data, Migration, Milkweed Butterflies. Bookmark the permalink.