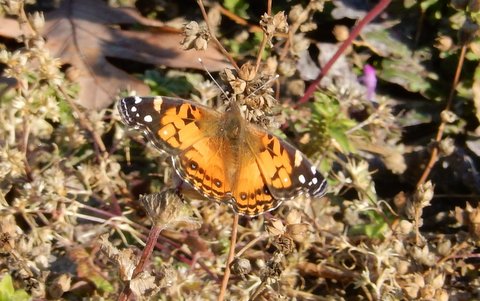 If you have already made plans for these two holidays, you still might want to get out for a December look. Since our log began in 2008, we have reported 19 species in 256 observations in December.

The 19 species that have been reported over the years are cabbage white, clouded sulphur, orange sulphur, cloudless sulphur, sleepy orange, eastern tailed-blue, summer azure, blueberry azure, variegated fritillary, question mark, eastern comma, mourning cloak, American lady, painted lady, common buckeye, red admiral, monarch, fiery skipper and sachem. (This list could be pared down to 18 if the lone report of a summer azure on December 10, 2015 is changed to blueberry azure, which would make it consistent with the other three reports of blueberry azure that month.) 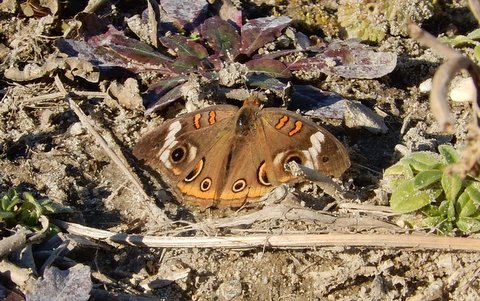 Common buckeye is one of our most reliable December flyers.

Cape May County is the December hot-spot. This makes sense in that not only is it our southernmost county, but it is also surrounded by the “big heater” as some Capers refer to the ocean and Delaware Bay, as the relative warmth of these waters moderates temperatures in fall and early winter. Even if you are not interested in traveling to the Jersey Cape, there is no need to despair: of our eight southern counties, only OCN has failed to report December flyers.

Some enthusiasts might find it surprising that temperature is not the only weather factor to consider in finding December butterflies. A day in the 50’s that is cloudy and has winds howling from the SW may not be as suitable for butterflies as a day in the 40’s or even upper 30’s that is clear and calm. Butterflies desire warmth, and windy days do not allow for warmth to accumulate in micro-climates like tufts of grass or sun-facing tree trunks and rocks. It also seems probable that the energy expenditure required to fly in strong winds creates a negative balance on the survival sheet.

Our late bugs can be found in both fields and woods. Generally speaking, species likely to be found in open fields include cabbages, sulphurs, buckeyes, American ladies, painted ladies, variegated fritillaries, and monarchs. 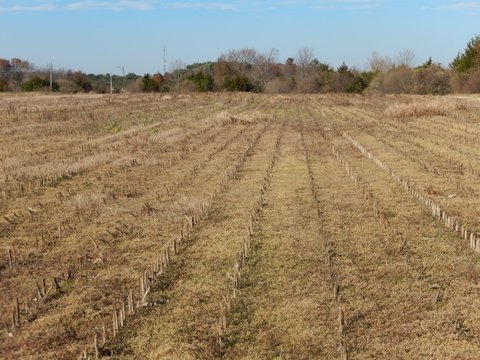 Species that are more likely to be found in wooded areas include commas, question marks, mourning cloaks and red admirals. However, don’t be surprised to find a cloudless sulphur in the woods or a red admiral basking on a parking lot dividing strip.

Finding butterflies that prefer wooded areas is fairly simple: go to a wooded area, preferably one with sandy roads and paths that collect and hold warmth, and simply walk and observe. 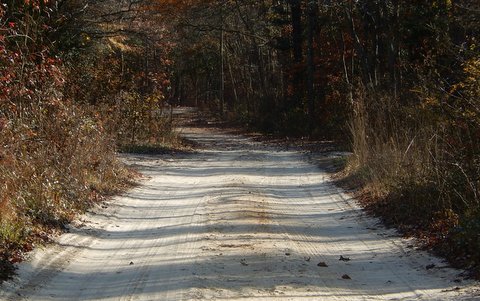 The kind of sandy wood-side trail that might hold butterflies in December.

Open field butterflies are more complicated. The best open areas to search are fields that still have flowers, or in the case of orange and clouded sulphurs, fields that have grasses in 4-8” range. The best December fields are usually the products of late summer mowing. These fields that have been cut back are the most likely places to find last bloomers like mustards, dandelions, ground ivy and frost aster. All these blooms are highly attractive to butterflies. Corn fields that were harvested early often load up with a variety of weeds that can make them the most productive locations to walk. It is also worth keeping an eye out for gardens that still have blooms; even plants that we do not think of as butterfly favorites – Chrysanthemums, for example — attract late season species. My latest November sachems have all been found on this plant. 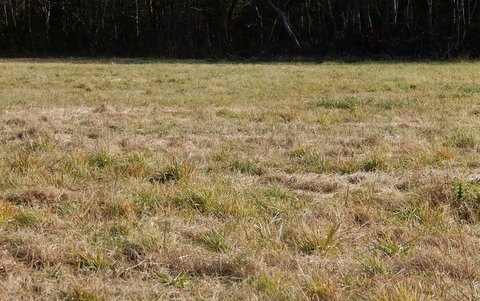 Apparently empty fields can surprise you with December butterflies.

The current December is looking promising. On my outings on November 28th and 29th in CMY, I found at least one species at seven of the eleven locations I visited. One field offered up five species, and the total number of species for the two days was seven. On a first of December outing I found three species in one site, and after three days of observations this month, our observers have already reported butterflies in three counties (CMY, GLO, and BUR) and we have totaled four species so far – orange sulphur, anglewing sp. (likely a question mark), common buckeye, and monarch. 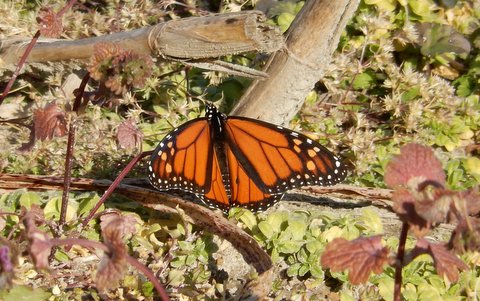 Monarchs have continued to fly in South Jersey through late November in 2017 and now into December.

Will we reach 20 species for December species this year? There are a handful of species that could make a December showing. Species that have flown in late November include black swallowtail, pearl crescent, common checkered-skipper, Ocola skipper, and gray hairstreak. My favorite candidate for next on the list is a species I have seen in both November and January: the American snout.

This entry was posted in ID Challenges & Tips, Late Dates. Bookmark the permalink.