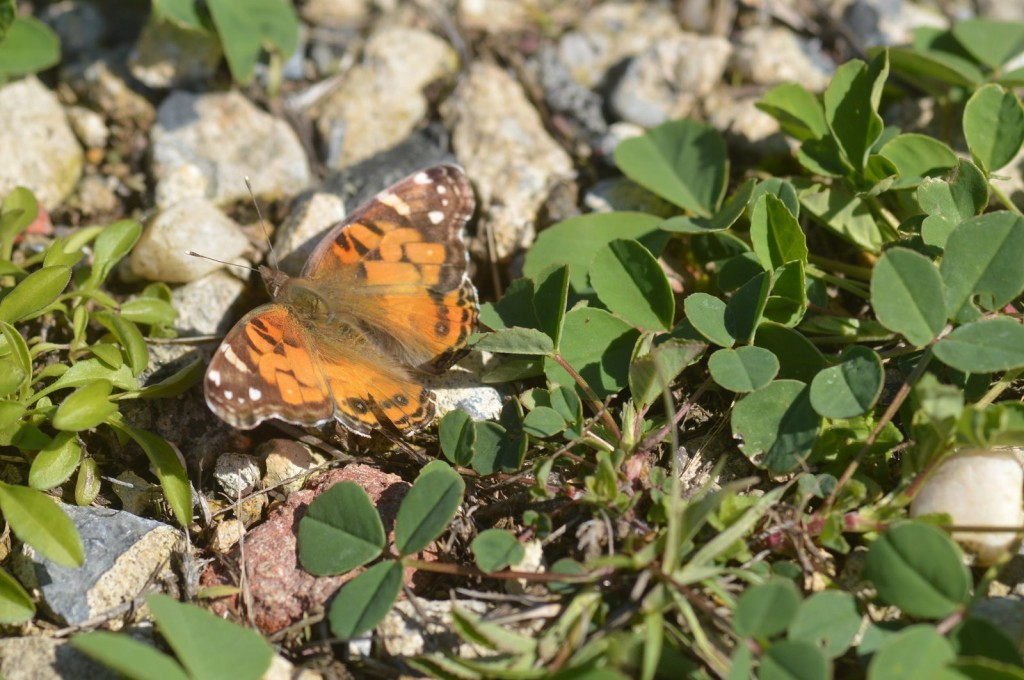 An American lady, photo’d by Will Kerling on 4-6-16, Gus and High Beach Roads, CMY. Has it just arrived in NJ after crossing the crossing the Bay from the south?

Northbound migration by butterflies in spring is much harder to document than their southbound flights in fall.  For one thing, the numbers of individuals headed south in fall are orders of magnitude larger:  monarchs, buckeyes, red admirals, painted ladies, and one or two other migratory species can be so numerous August through October that they are hard to miss.  Other than “wrong-way” migration in fall by southern strays (fiery skipper, Ocola skipper, and others), the only northbound migration that can be hard to miss in NJ are the once-every-few-years irruptions of painted ladies (e.g. May 2012, July 2007, and July 2001.)

In all other cases, it seems, northbound migration in southern NJ seems nearly invisible. If you are lucky, you might find one worn monarch a year in April or May that you recognize as a migrant.  We know other species return to New Jersey each spring by flying northbound from southern states, but it can be very hard to see it happening and realize you are seeing it.

We have had a number of reports of American lady in the last two weeks, however, that suggest they are migrating right now — and that this could be a good chance to recognize spring migration by a butterfly as it happens.

Note how many of the listed reports on our Sightings Log come from coastal or near-coastal locations. 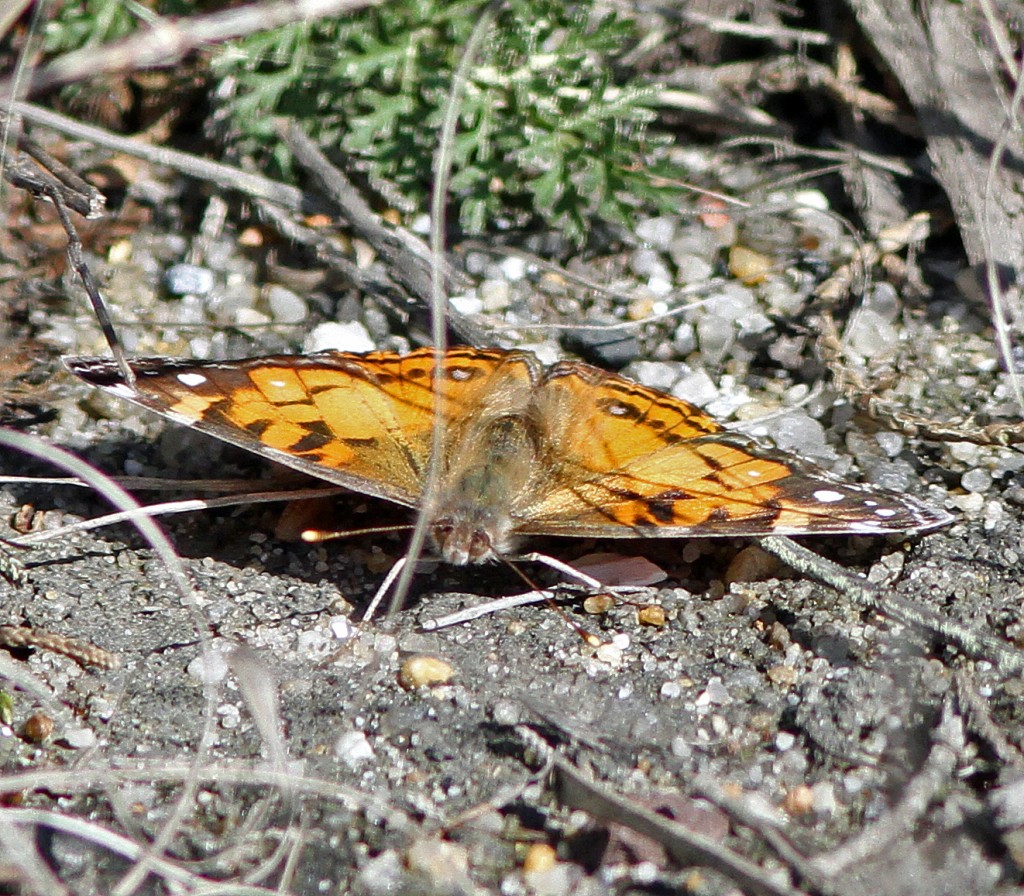 Also note that two of these reports (Cynthia Allen’s from her yard in Cape May Courthouse on April 4 and Will Kerling’s from Lizard Tail on April 6) document egg-laying.  The first spring migrant monarchs are usually (or always?) females carrying eggs and they have been observed and photo’d ovipositing in extremely worn conditions — as if, now that they have made it here, they can lay their eggs and die.

Could this week’s American ladies be following this same pattern, carrying eggs fertilized by males in March in southern states and ovipositing on the first available host plants they find?  Cynthia reports her egg-layer was “worn and small.”

Will’s Lizard Tail females laid eggs on a species of pussytoes, Antennaria, sp.  which might be among the few host plants large and green enough for them at the moment (others of their preferred hosts emerge later in the year). 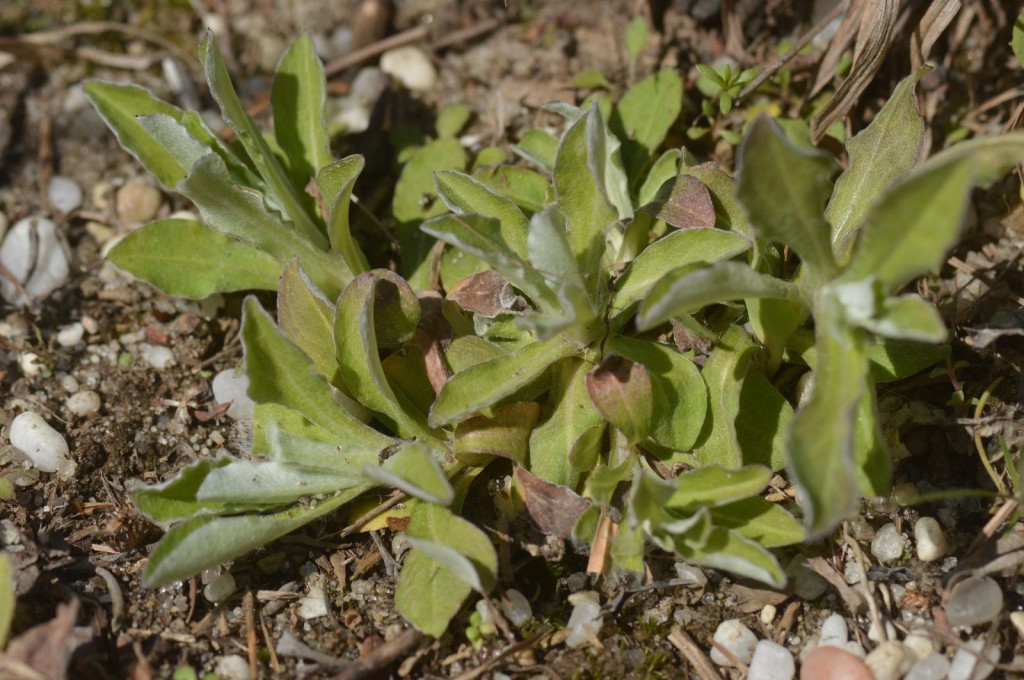 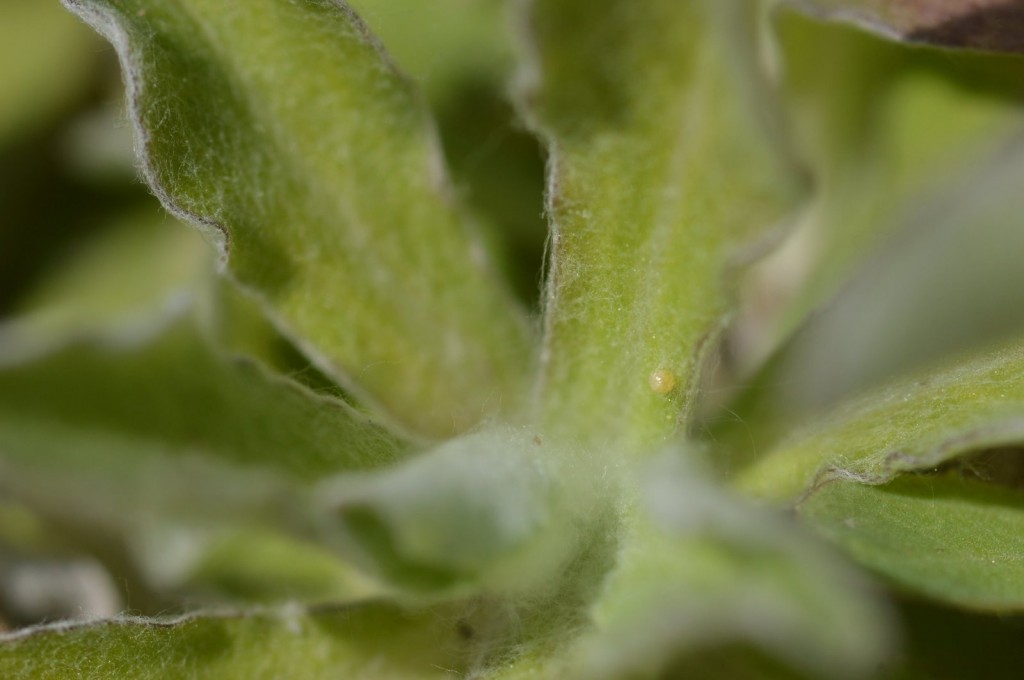 Although it is probably impossible to prove that the American lady you have found is a migrant, you can certainly consider the following variables as increasing the likelihood:

1. Wear and tear. Individuals emerging from pupae that have over-wintered (i.e. non-migrants) should be crisply-colored and with little or no wing wear for at least another week or two and perhaps longer. (In fact, it would be another challenge to document our first crisp and obviously-fresh non-migrant. No photos of Am ladies yet on the Sightings Log are certain non-migrants — to my eye at least.)

3. Individuals in coastal locations, especially along the Delaware Bayshore.

Please report what you find. We could document a phenomenon this spring that generally goes unnoticed and unreported. 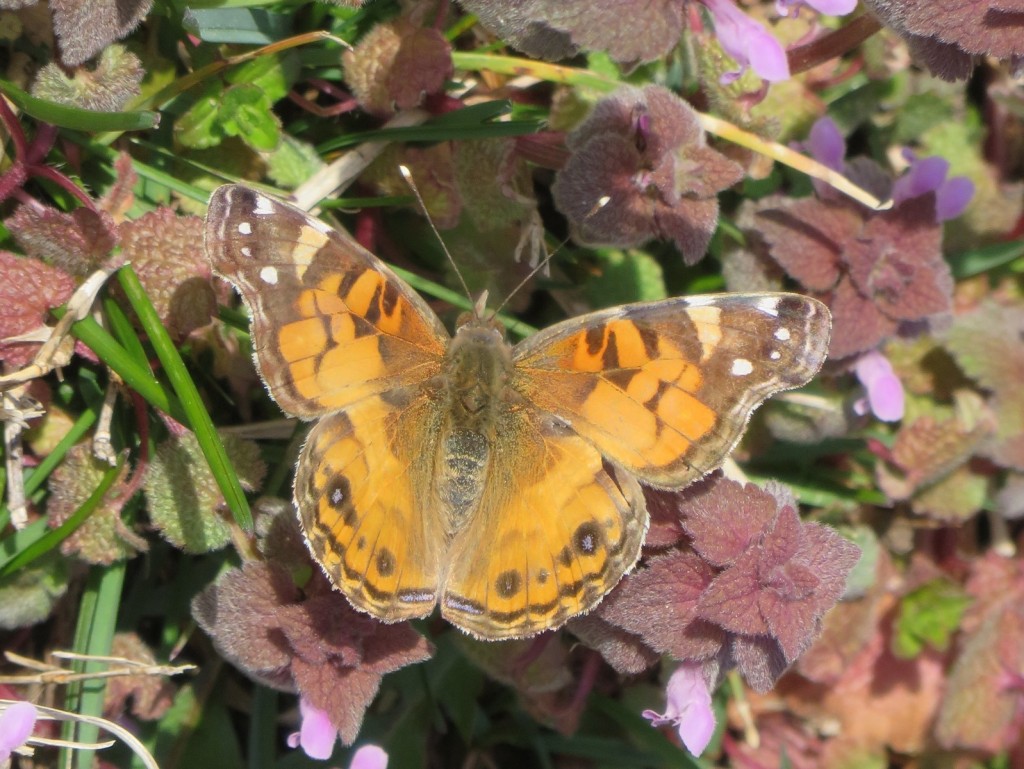 As of today, April 7, this is our northernmost American lady reported on our Sightings Log — photo’d by Dave Amadio on 3-24-16 at Cherry Hill, CAM. That early date and the apparent wear seems to suggest that this too was a migrant individual.