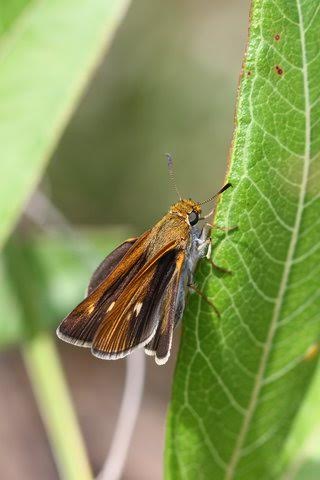 One particularly cooperative two-spotted skipper gave us a nice dorsal view as the sun came out from behind the clouds. Photo by Dave Amadio.

On June 13 Stephen Mason led 13 members of our group on a field trip to Parker Preserve. Our luck was very good for one of our two target species: we found the first two-spotted skippers (four individuals in total) that our team has recorded since 2012. The other target rarity, dotted skipper (once almost reliable at Parker), escaped us. 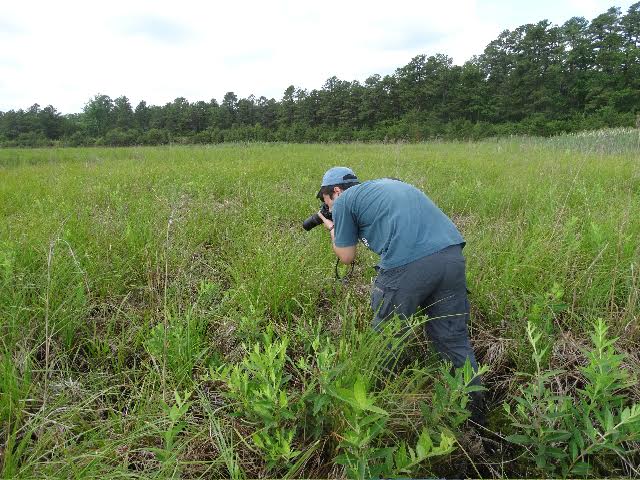 Our leader documenting a find. Photo by Chris Herz. 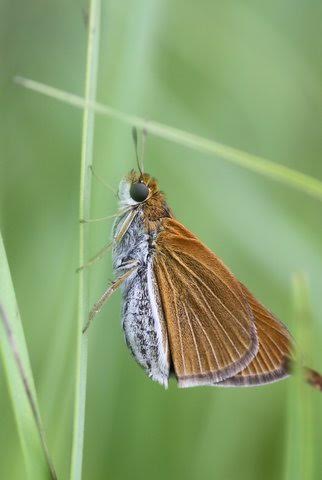 The slightly swollen abdomen suggested this two-spotted was a female. Photo by Dave Amadio. 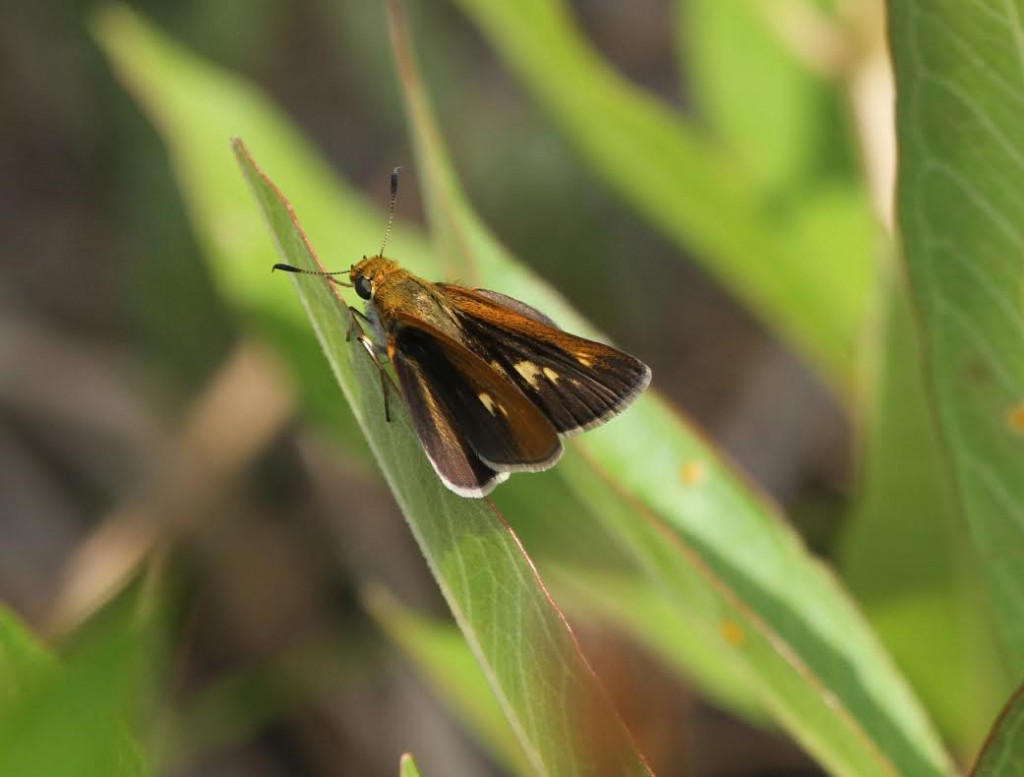 Brian Johnson also managed to capture with his camera the skipper’s tough-to-photo upper-side.

The trip made a wonderful day in the field at a quiet, pretty spot under a lovely blue-sky. Four of our participants were from Pennsylvania (not counting Steve, now a graduate student at Drexel), and one drove that morning from West Virginia: Barry Marts, butterfly partner of Matt Orsie, whose blog on W.V. butterflies can be found here: West Virginia Butterflies 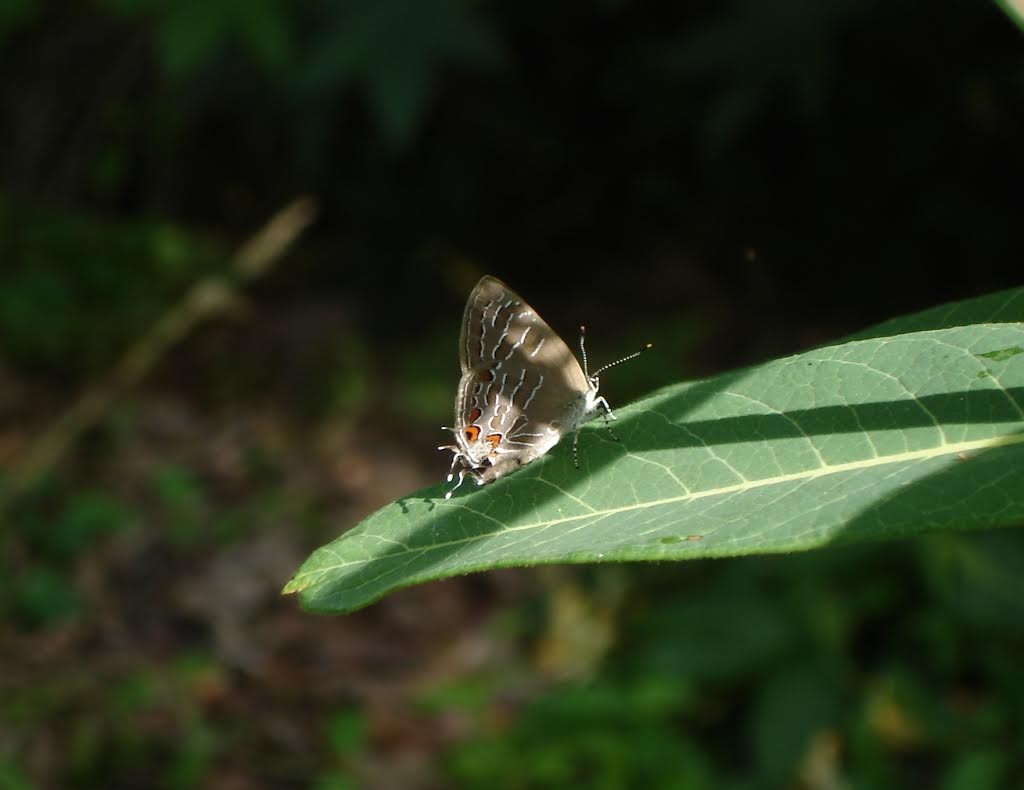 During a break in the search for dotted skipper (out of the hot sun and into the cooler woods) Steve Glynn photo’d our 2015 FOY striped hairstreak. 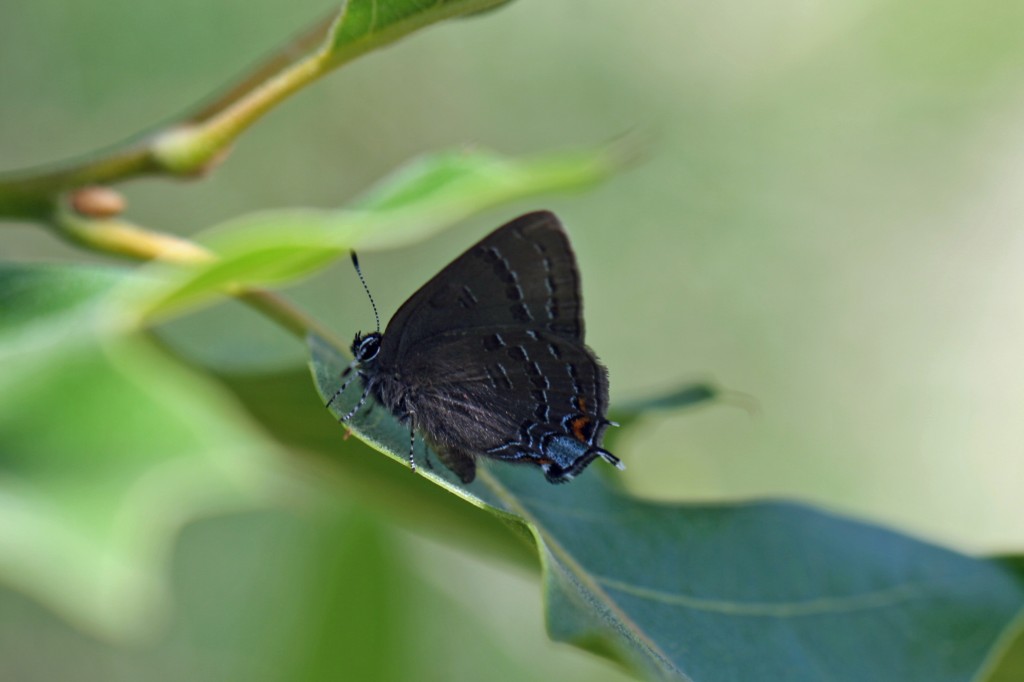 Steve Glynn found this banded hairstreak hiding in the leaves of a scrub oak. Photo by Jack Connor. 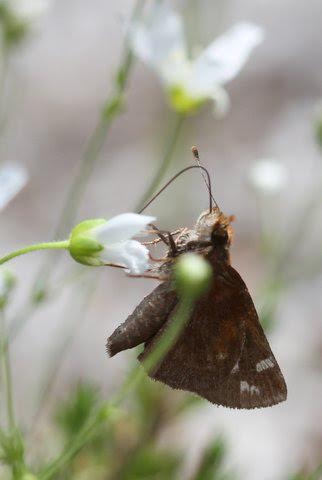 This skipper puzzled us for many minutes — appearing and reappearing among the sandwort flowers, while we debated its identity. This good shot by Dave Amadio enabled him to ID it as a female zabulon — rare at the Preserve, according to Steve Mason, who knows the butterflies of Parker as well as anyone.

And we found and enjoyed lots else. One of the best pleasures of these outings is the richness of expertise from various folks who have been brought together by butterflies — people who know birds, plants, and lots else. 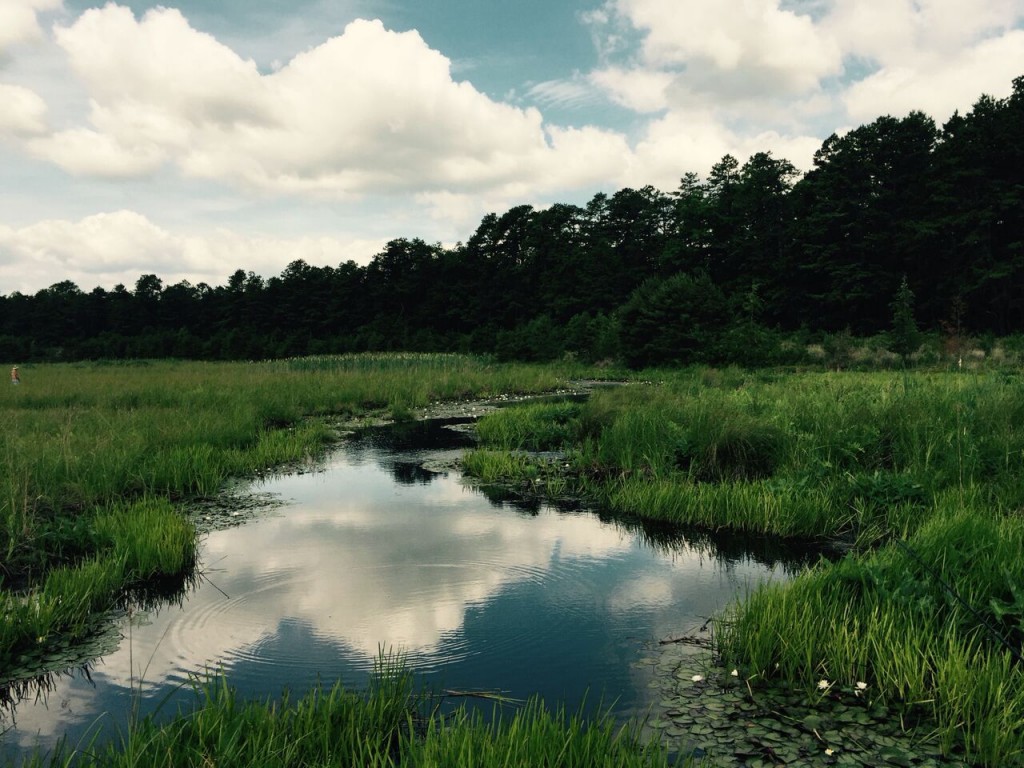 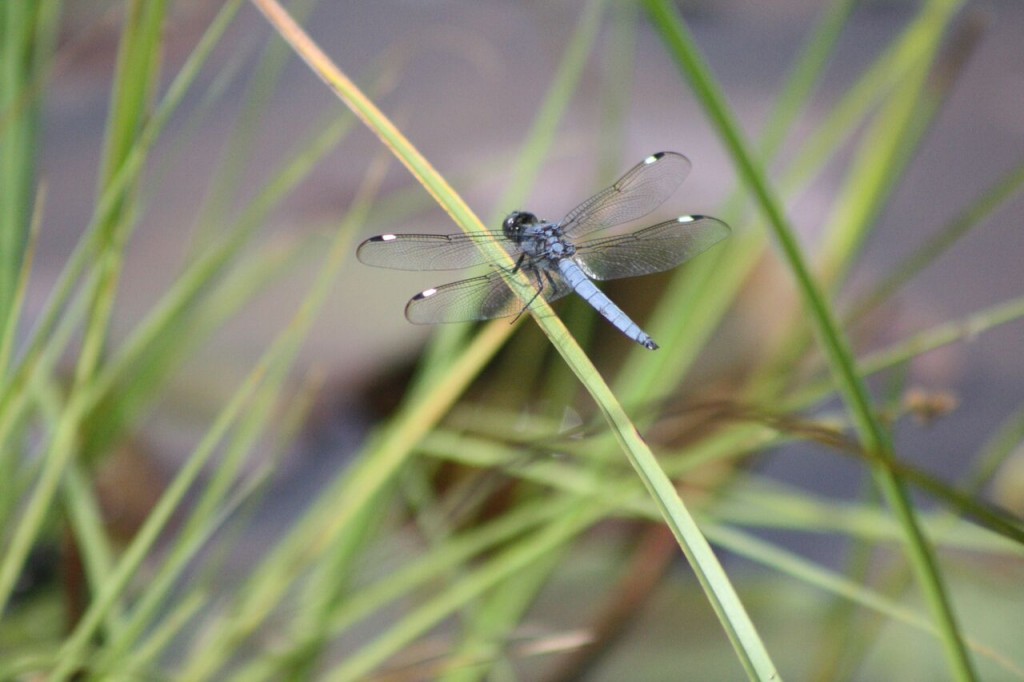 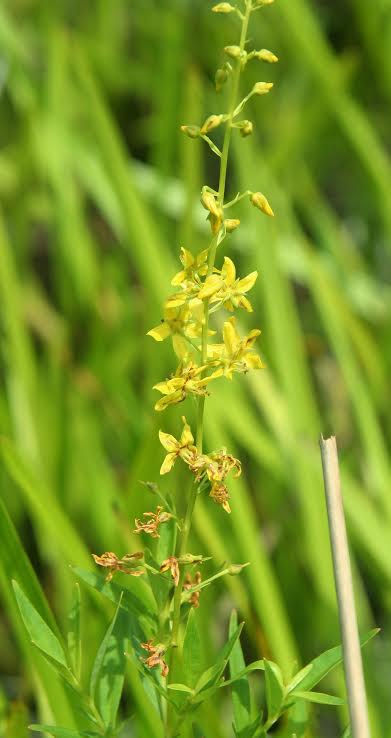 Yellow loosestrife was just opening in the bogs. Photo by Steve Mason. 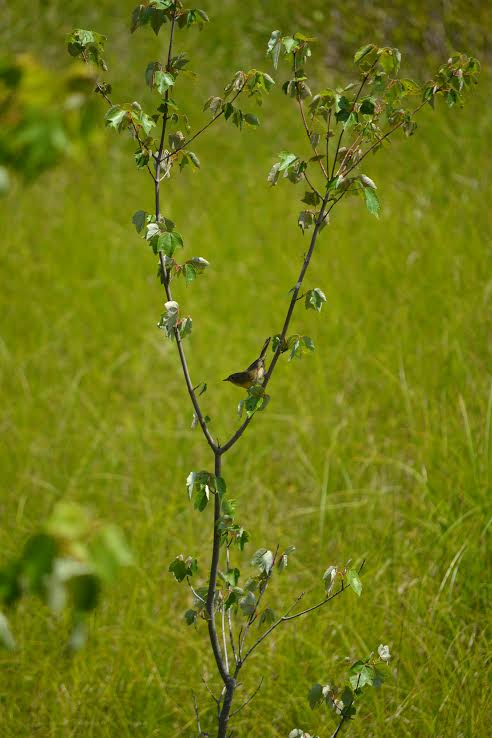 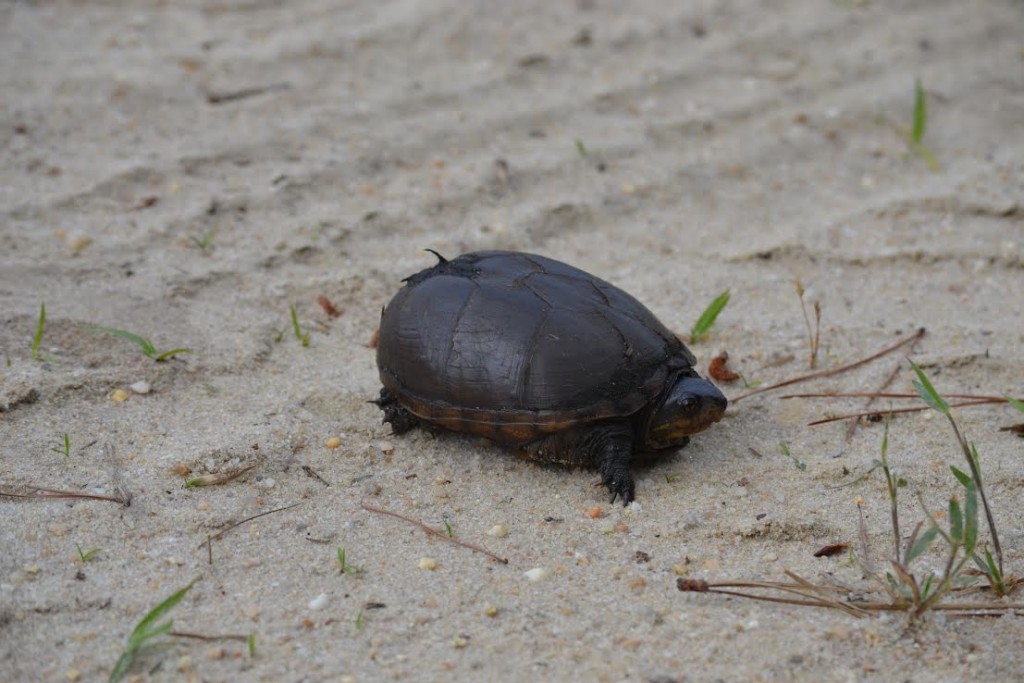 A musk turtle out of the water, perhaps searching for a nesting spot. Photo by Maria Berezin. 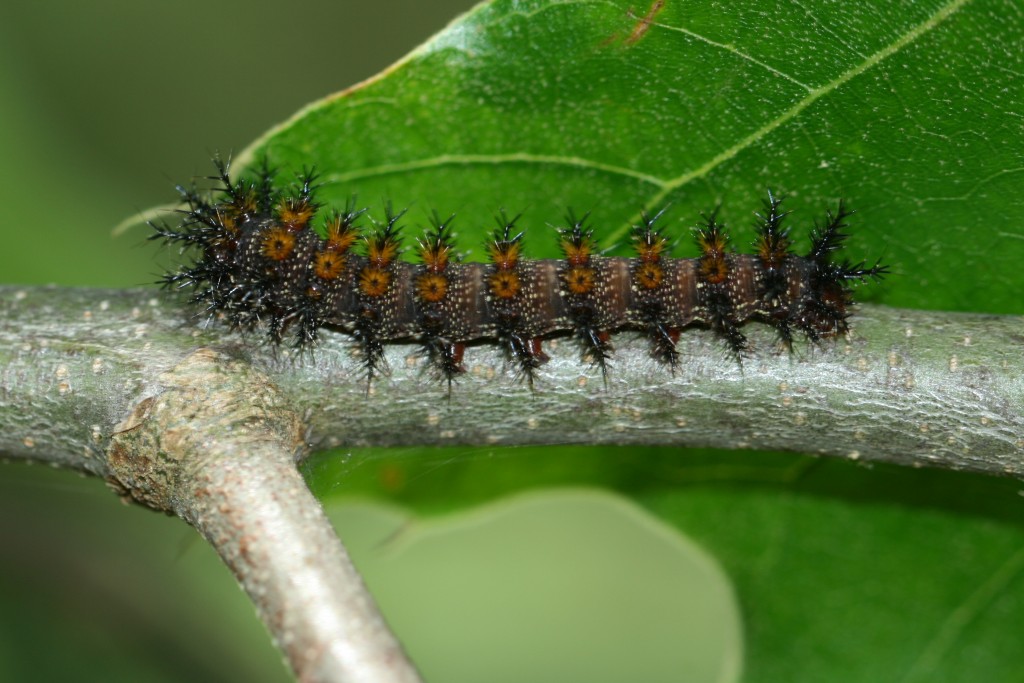 You can join the fun on either or both of our next two field trips: On June 20 to Medford Leas led by Chris Herz and on August 1 to various hotspots in Salem County led by Dave Amadio. (If you are willing to lead a field trip for our group, just send the details to nacotejackATgmailDOTcom.) 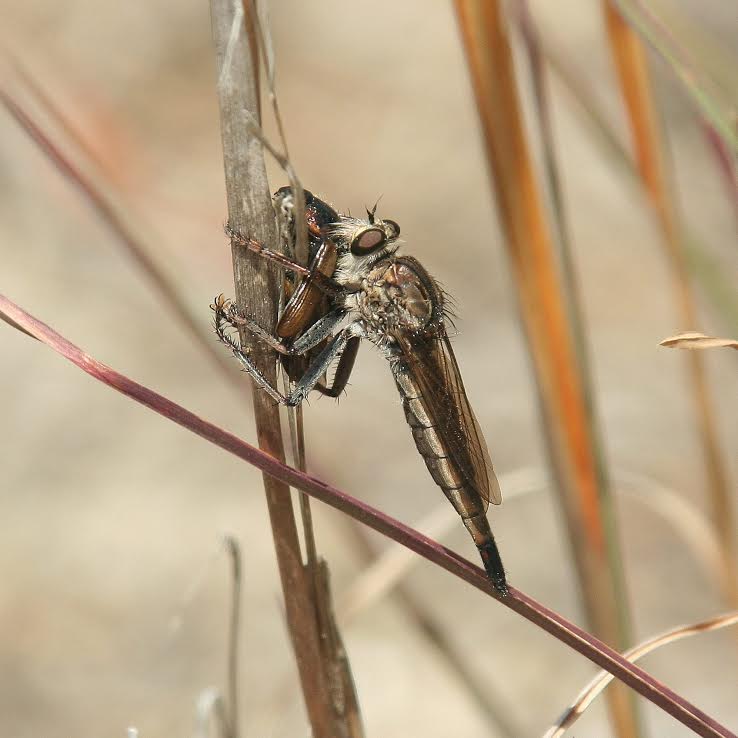 Robberfly with prey, an Oriental beetle. Photo by Steve Mason.