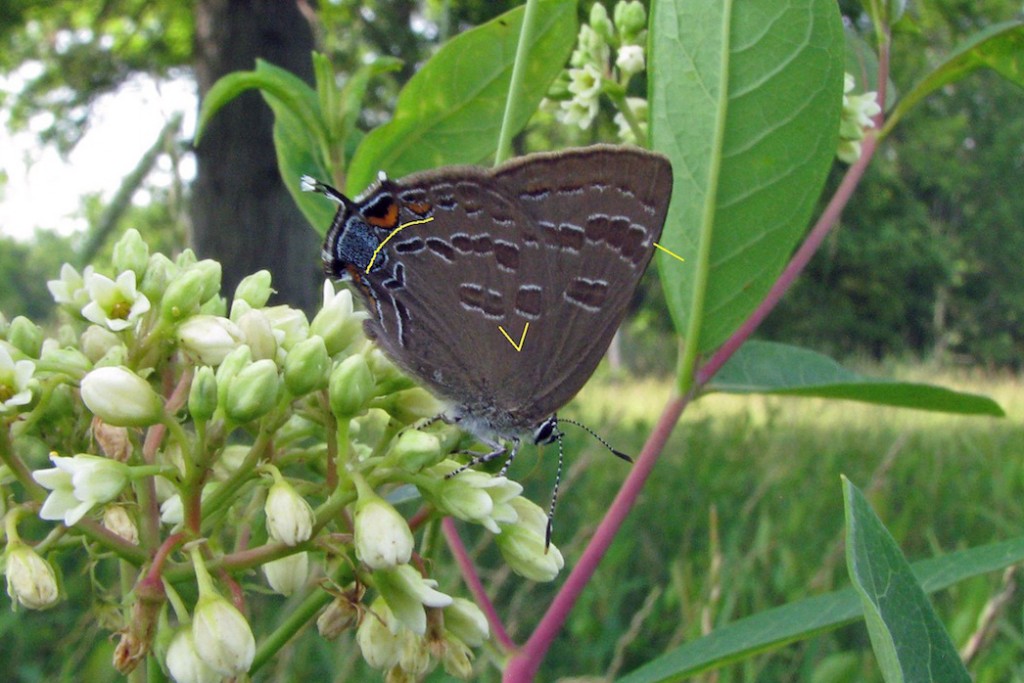 In Butterflies of New Jersey Michael Gochfeld and Joanna Burger end their discussion of hickory hairstreak with an intriguing sentence, “This species is certainly both misidentified and overlooked.”

They note that various authors have differed about the keys to hickory’s ID and also about its abundance in the state. Its historical status is “impossible to assess from published accounts since the species was not described [named as a distinct species] until 1942, and even then many literature records are suspect. Some specimens of banded hairstreak were presumably this species.”

Studying the field guides to learn how to separate hickory from banded, its closest look-alike, means diving into subtle distinctions. The most-often noted mark is the way the blue hindwing spot extends farther inward on hickory. If you have ever tried looking for that, however, you know it’s tough to see in the field — and hard to assess even in most photos.

Jim Springer has very helpfully provided the photo above and three distinctions to look for:

Jim has marked these features in his photo above. That third feature — the little tick mark — seems especially helpful.

Here’s a typical banded hairstreak for contrast: the blue hw spot does not jut inward much farther than the orange spot next to it; the leading edge bars are not aligned; and there is no little tick mark at the end of the leading edge of the post-median band. 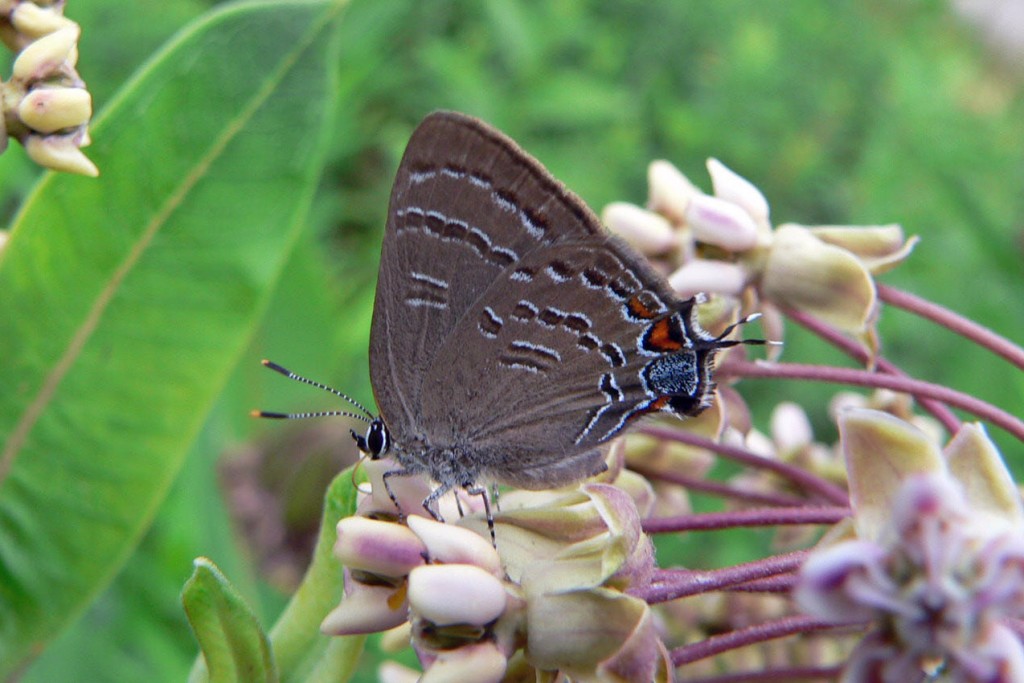 Here’s another hickory hairstreak from North Jersey, photo’d by Dave Amadio. He has highlighted the blue hw spot breaking the plane of the orange hw spots next to it and also Jim Springer’s little tick mark. 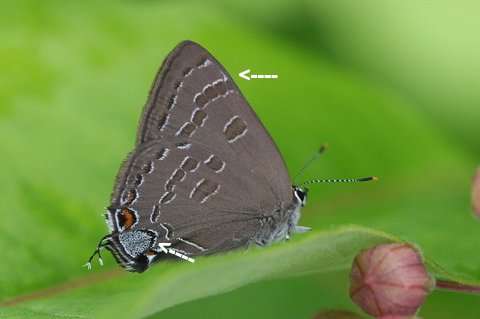 One other key is location. Hickory trees are not nearly as common in South Jersey as in North Jersey, and are virtually absent in Pine Barrens soils. In particular, bitternut hickory, Carya cordiformis, apparently the most common host, seems hard to find in NJ south of the Piedmont.

The hickory hairstreak’s range map on North Jersey’s NABA site (maintained by Jim Springer) shows recent photo records from only four NJ counties, all in the north: Sussex, Morris, Somerset, and Monmouth. Older, pre-2000 photos are known only for three other counties: Warren, Hunterdon,and Passiac. The site notes that hickory hairstreaks are “generally an uncommon to rare species that goes unreported some years.”

Here’s a link to their discussion:

Now for those who like to contemplate the maybe-not-so-impossible:

Both pignut hickory, Carya glabra, and mockernut hickory, Carya tomentosa (a.k.a. C. alba), grow in areas of Cape May and Cumberland Counties and up along the Inner Coastal Plain. In some of those areas mockernut hickory can be numerous. Those two species are not listed as specific hosts in the sources I have tried, but butterfly host plant lists are often incomplete, so. . .

could it be that hickory hairstreak caterpillars might use mockernut or pignut?

. . .or could bitternut hickory be more common on the Inner Coastal Plain than botanical sources indicate?

If you find a hickory hairstreak in our area, do your best to get a sharp close-up photo. And prepare to be celebrated!