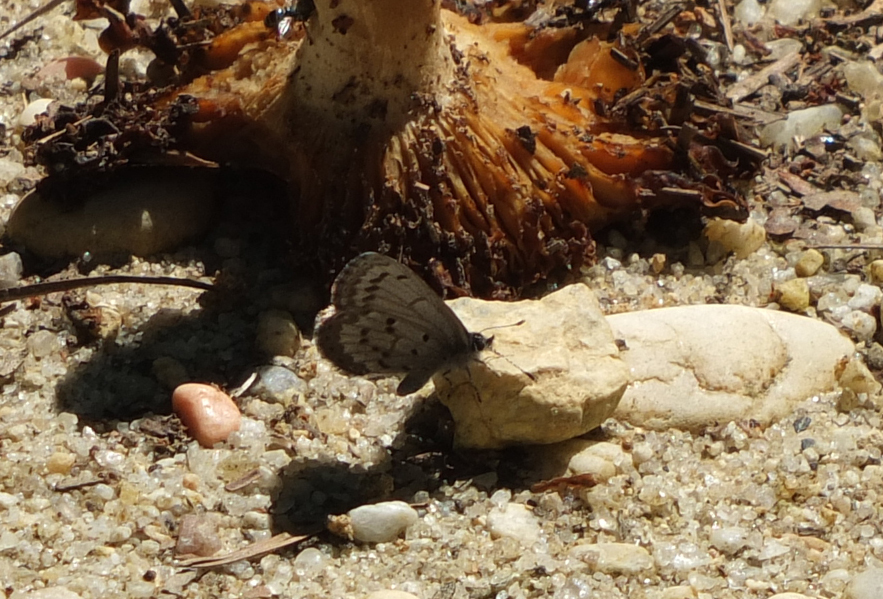 A mysterious azure photo’d by Jim Dowdell in Atlantic County on 8-16-13.

Yes, the date above is correct. The photo was taken just last week — August 16th, not March 16th or April 16th.

Jim Dowdell and Clay Sutton found the odd-looking azure on that date at the Atlantic City Airport (while doing a survey on restricted area property there).

It certainly looks like the marginata form of Celastrina lucia with the gray and heavily-spotted under-wings and that dark trailing edge. That would be a remarkable find as C. lucia, the earliest-emerging member of the spring azure complex. seems a classic single-brooded (univoltine) species. Adults fly only from mid-March to mid- or late-April. Eggs hatch soon after the spring flight. The caterpillars feed on blueberry flowers, then pupate and remain hidden while they over-winter for 10 months — until the following spring. Adults of the next generation are not known to emerge until the following calendar year, 12 months (or so) after their parents.

So what species is the azure in the photo? Jim adds that the individual was also dark blue on top and it flew like a male blueberry azure — in coursing patrol low over the ground, just as our blueberry azures do in March and April.

The verdict on the ID is not certain, however.

David Wright, whose research work with Harry Pavulaan led to the original recognition and naming of the species, is not convinced it is Celastrina lucia. He observes in an email to Will Kerling that C. neglecta — summer azure — can be variably dark on the ventral surface and dark blue on the dorsal surface in late summer. David notes:

“[That] Sure looks like Blueberry Azure from Jim’s photo.

“[But] I would be very surprised if this was Celastrina lucia. Lucia pupae are in obligate diapause and require a good four months of cold temperatures to break diapause. At least this is what we discovered in the laboratory after rearing 100’s. I have never seen a lucia in the field other than in early spring.

“I rather think this is Celastrina neglecta. We occasionally see specimens like this in late summer around here and several exist in collections. Paradoxically, in August/September in the woodlands of the PA state game lands, the phenotype of neglecta darkens and the ventral markings expand prominently. Form ‘marginata’ is not uncommon. The dorsum color of the male’s wings becomes solid blue. Art Shapiro was the first one who pointed this out in Staten Island in late 1960s.

“While we can’t prove or disprove that a lucia may have broken diapause in August, I only can point to what is known to happen to some late summer neglecta specimens.

“Interesting topic. It seems to show up on butterfly blogs in August.

This entry was posted in ID Challenges & Tips, Lycaenids. Bookmark the permalink.