The cobweb skipper above gives our group’s log thirty-eight species of butterflies for the first half of April and thirty-nine species for the year. (Summer azure, Celastrina neglecta, seen in its spring form in March, has not yet been reported this month.)

The pace of butterfly emergences remains well ahead of the pattern we have seen over the past four years. Ordinarily by this point we have recorded about two dozen species (we had twenty-five by April 15 last year).

Here’s our group’s list for the first fifteen days of April, 2012. FOYs are astercized: 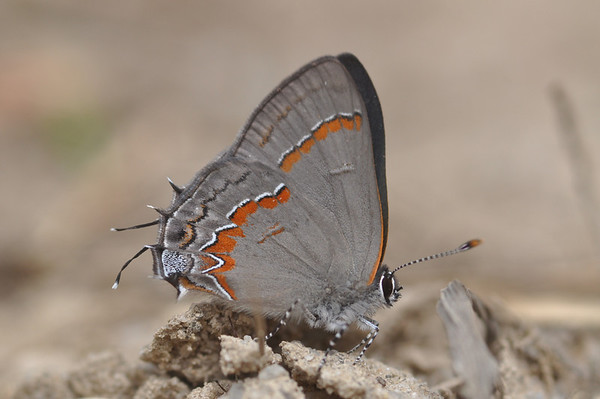 Common buckeye, smaller than a quarter, photo by Will Kerling, 4-15-12, one of many “runts” in this species that he and other contributors have observed.

Butterflies have been just one element in the “early spring” pattern evident in a wide spectrum of organisms this year, including many (not all) migrant birds, many (not all) flowering plants, and many other insect groups — moths, bees, and even craneflies:

Phantom cranefly, Bittacomorpha clavipes, generally a summer species in South Jersey, photo’d by Pat Sutton in her garden in Goshen, 4-7-12, at least a couple of weeks early.

It will be interesting to see how long the flight periods of our early-emerging butterflies will last, especially the single-brooded species. Will they shift or stretch? In other words, will blueberry azures, pine elfins, sleepy duskywings, cobweb skippers, and the like disappear from sight earlier than usual? Or, will they continue to fly to the dates when we generally last see them?

An individual adult butterfly has a limited flight period, of course — because of wing wear, predation, accidents, and other inevitable problems — so it’s very unlikely that a blueberry azure emerging on February 23 (~three weeks early) will survive long into March or that a cobweb skipper emerging in mid-April will fly many days into May. But what pattern will we see for the species? Will adults continue to emerge to the end of the species’ usual flight period? Or will we see something more like a shift of the population, when all/most members fly early?

“Late dates” are not as easy to note and celebrate as FOYs, but this is a year when recording them carefully could tell us something about the ecology of our local butterflies, it would seem.

Who will spot the last blueberry azure or the last pine elfin? There is a worthy challenge for sharp-eyed butterflyers!

The last of a pine elfin being consumed by a big sand tiger beetle, Cicindela formosa, at Whiting WMA (Ocean County), 4-14-12, photo by Chris Williams.