How many species can you document egg-laying this year?

Because studying host plant preferences is probably the best way to start a serious investigation of any lep’s ecology, we should collect shots like Mike Crewe’s above — especially from hard-to-ID species or little-known species.

Page through Cech & Tudor’s Butterflies of the East Coast or Gochfeld & Burger’s Butterflies of New Jersey and you can find many references to Host Plant: “Not certain” or “Undocumented” — or a vague reference to a large group of plants, such as “Grasses” or “Legumes” or “Asters.” This is not the fault of the authors of those wonderful books, of course. It is evidence that entomological science has not yet discovered all there is to know about some of our favorite insects. And it also means a sharp-eyed observer able to capture the egg-laying female (in a photo where the plant is also identifiable) might make a little contribution to that science.

Such photos could also help us discover that our local butterflies have different preferences in our area than elsewhere. (We might even find differences within our eight-county area. Do holly azures use inkberry, Ilex glabra, more often within the Pine Barrens and American holly more often outside it? At least a couple of our SJBF contributors have wondered about that possibility.)

An entomologist might point out that the true test of successful ovipositing comes after the egg-laying: do the caterpillars survive on the plant? Did they feed successfully? But a documentation of the original action by the female adult is certainly where we can start. And who knows? Maybe some of us are so fascinated with butterflies that we might return to the same plant a few days after the egg-laying to photo the caterpillars in action!

Even when the host plant is known, we can develop a sharper, personal understanding of butterflies while documenting egg-laying. When and where on the host a female lays her eggs is often telling. Note in the photos above and below of two sibling Celastrina that the females oviposit directly on the flower buds of the host plant and that the blossoms are not yet open. Celastrina caterpillars feed on the flowers of their host plants — apparently because the flowers hold fewer toxic chemicals than the leaves. The female laying her eggs on the blossom before it opens gives her young a longer time to feed.

If you take an interesting egg-laying shot this year, please send along, and I will try to include as many as possible here on our blog. 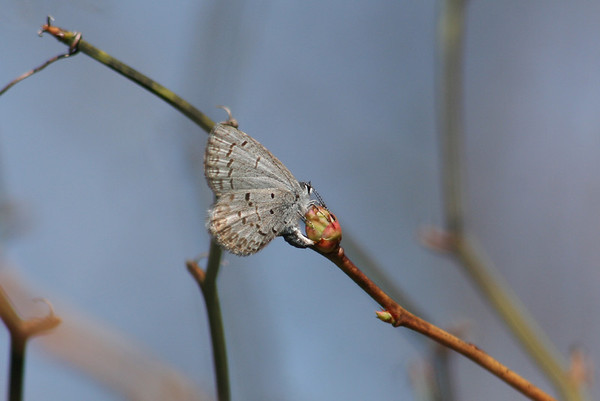 This entry was posted in Host Plants, Lycaenids. Bookmark the permalink.