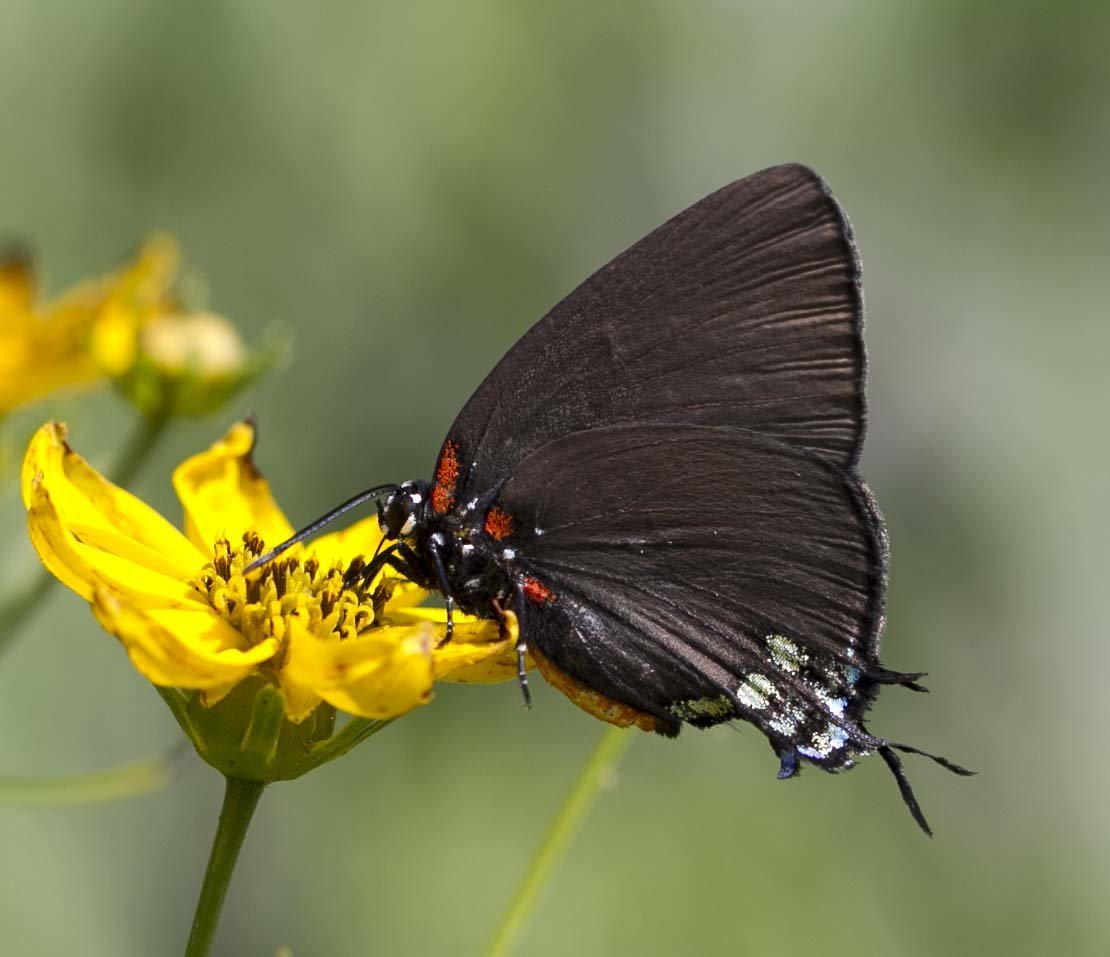 This great purple hairstreak, found and photo’d by Beth Polvino in her garden in North Cape May, seems to be the first individual documented in New Jersey in more than a century.

Beth Polvino shook up NJ’s butterfly community on June 15 when she found and photo’d a great purple hairstreak, one of the most beautiful and sought-after butterflies in all North America, nectaring on Coreopsis in her garden in North Cape May along the Delaware Bayshore.

Scroll through the sources/status list for Altides halesus in Gochfeld and Burger’s Butterflies of New Jersey (1997), and you will come upon a long series of assessments over the years (from 1890 on) agreeing this species has been long gone from the state:  “Not listed,” “No evidence of recent vagrancy,” “No recent records,” and so on.   David Wright and Pat Sutton in their Checklist Of The Butterflies of Cape May (1993) sum up the situation concisely, “Historically present; no recent records.”  Lepidopterist Dale Schweitzer is cited by Gochfeld and Burger as noting the species was  “probably resident in the last century [i.e. the 1800s], but extirpated due to the decline of its host.” [See the Update at the bottom of this post for DS’s response to Beth’s find.]

The single positive data point in Gochfeld and Burger’s list comes from Arthur Shapiro and his Butterflies Of the Delaware Valley (1966). On page 29 of his booklet Shapiro explains that he decided to include the species  (which he calls “the great blue hairstreak”) in his compilation on the basis of a single record by Skinner and Aaron of “two or three…near Westville, NJ.”

Shapiro’s reference is to Skinner and Aaron’s checklist “Butterflies of Philadelphia, PA” published in two parts in  the journal Canadian Entomologist in 1889.

Henry Skinner and Eugene M. Aaron were entomologists associated with the Academy of Natural Sciences in Philadelphia who worked together in the late 1800s and into the 1900s. Skinner, who gave up his career as a doctor to dedicate himself full-time to the study of insects, became the state entomologist of Pennsylvania and the editor of the Entomological News. Eugene Aaron was the older brother of Samuel Aaron, who later discovered the skipper Skinner described and named for him.

Westville, N.J., just across the Delaware River from Philadelphia and accessible by ferry in those days, was apparently one of the favorite hunting grounds of all three lep-chasers, as it is listed on the checklist as the source of a number of their specimens.

As far as I can determine, Skinner and E.M. Aaron’s report names the only specific site listed for the species in the state of New Jersey and is also the most recently documented occurrence here.

So!:  Beth’s great purple hairstreak might be the the first identified in New Jersey in more than 128 years.

Even more certainly, it seems to be the first living individual ever photographed here.

But where did Beth’s visitor come from? The species occurs in all three Delaware counties, although various sources suggest it is not numerous in any of them, nor in Maryland. The closest large colonies seem to be those in the Great Dismal Swamp, which straddles the border of Virginia and North Carolina.

Beth’s superb photographs suggest it was a female (lacking the flashing blue on underside forewing).

Was it a stray that wandered across the Bay from Delaware?  Or could it possibly be — just possibly be — a resident from an unknown, newly-established colony in South Jersey??

One of the frustrations of trying to put this rarity into perspective is the inaccuracy of many maps of the species’ range that you can find in various published sources as well as on the Internet.  Opler’s Butterflies East Of The Great Plains (1984), for example, claims the species “ranges from New Jersey….south to Florida and the Gulf.”  Opler’s map, which might be the source of later, even more misleading maps, colors in the whole state except for the northern Highlands.  Some later texts (e.g. Scott’s The Butterflies Of North America [1986]) and many Internet sources amplify this inaccuracy by coloring in the entire state as part of the hairstreak’s range.

The problem with those maps goes back to the species’ sole host plant, Phoradendron leucarpum, sometimes called “American mistletoe,” “oak mistletoe,” or “false mistletoe.” This plant is a woody, evergreen, hemiparasite common throughout the southern states (in the normal range of the great purple hairstreak) where it parasitizes live oak and  several other tree species. In New Jersey it is a rare plant, limited to the southern half of the state. Here it most often attacks Nyssa sylvatica — tupelo, a.k.a. black gum.  The demise of the mistletoe in southern New Jersey during the late 1800s and early 1900s seems to have been caused by the local industry of collecting it for sale at Christmas time.  It’s an evergreen with berries present in December, so it made an eye-catching decoration in the years before plastic took its place. It was often shot out of trees to be sold.

Here’s a good account of the practice of collecting it then and now:

How far north did mistletoe range in the 1800s and early 1900s? Witmer Stone in his The Plants of Southern New Jersey (1911) notes its sensitivity to hard winters and mourned its loss to collectors: “Comparatively little has been left on record regarding this interesting plant, now nearly exterminated in the State.” The two northernmost specimens he knew of were one just north of Keyport in Monmouth County that had died sometime around 1880 and another between Trenton and New Brunswick (Mercer Co) reportedly still alive up to 1884. In Stone’s time, as far as he could determine, Phoradendron survived only in scattered locales south of those points. 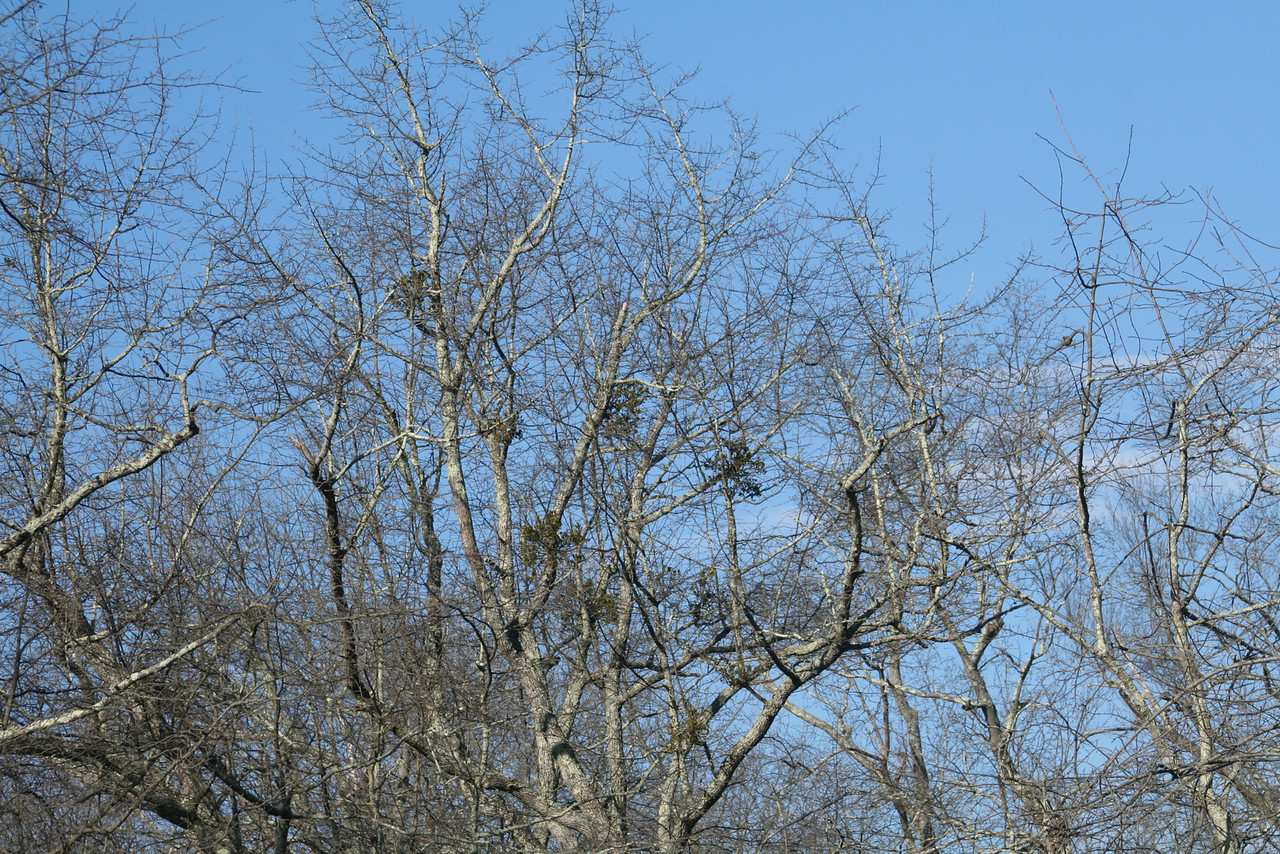 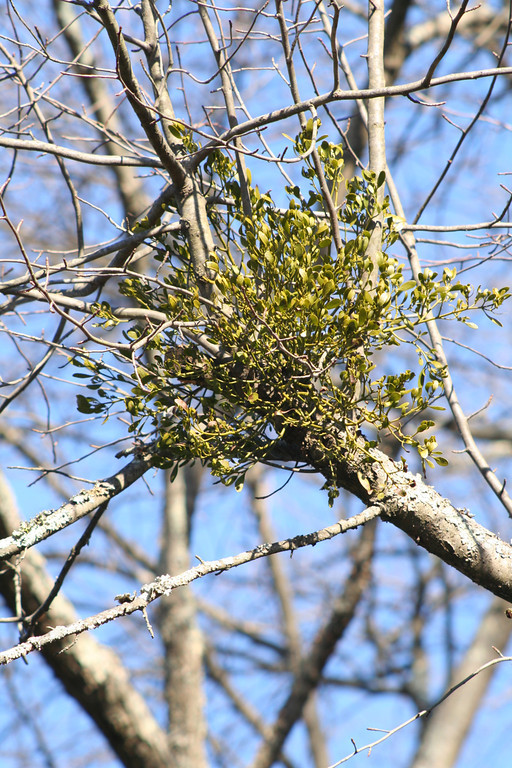 The plant is a hemiparasite: photosynthesizing for itself to some extent and also parasitizing from its host by penetrating into its wood to steal nutrients.

Today it remains a rare or localized plant in scattered spots on South Jersey’s Coastal Plain: on the upper reaches of the Great Egg Harbor River, in Bear Swamp in Cumberland County, in a couple of spots on the Mullica River, and a few other spots. Pat Sutton reports that the two places where she has found it closest to Beth’s garden are in Beaver Swamp WMA and Belleplain State Forest, both in Cape May County.

If a colony of great purple hairstreak does exist in New Jersey, can we find it?

Since the plant is no longer being shot from trees, and South Jersey winters have become so mild, as climate change takes hold, we can hope that the population of mistletoe is on the rise here.

Mistletoe is best found in winter — when its evergreen leaves stand out in the deciduous trees.  We could perhaps expand our searching places for the hairstreak by keeping track of mistletoe colonies we see next winter — and then returning to those spots next June and July to search of the butterfly nectaring beneath.  The odds are high against, obviously — but wouldn’t that be a discovery?

Or maybe we just have to settle for serendipity and wait for a lucky butterflyer to stumble on another great purple hairstreak (or two or three) this summer or next or the summer after.

The possibility is fun to imagine, at least!

“I hope this GPH sighting, which could be as significant as the first NJ Rare Skipper, proves to be the first of many — as the first find of Rare Skipper proved to be.   GPH occurs regularly in fairly comparable climates. The climate here is becoming more favorable, there is mistletoe in the general area, and if there is enough of it it, it seems reasonable this butterfly could establish itself (or re-establish if it was resident before 1900 when mistletoe was more numerous).
“I suspect this butterfly is limited northward by its food plant and not by climate (pupae under the leaf litter are not going to get very cold).  Its eastern range is very similar to that of the food plant.” 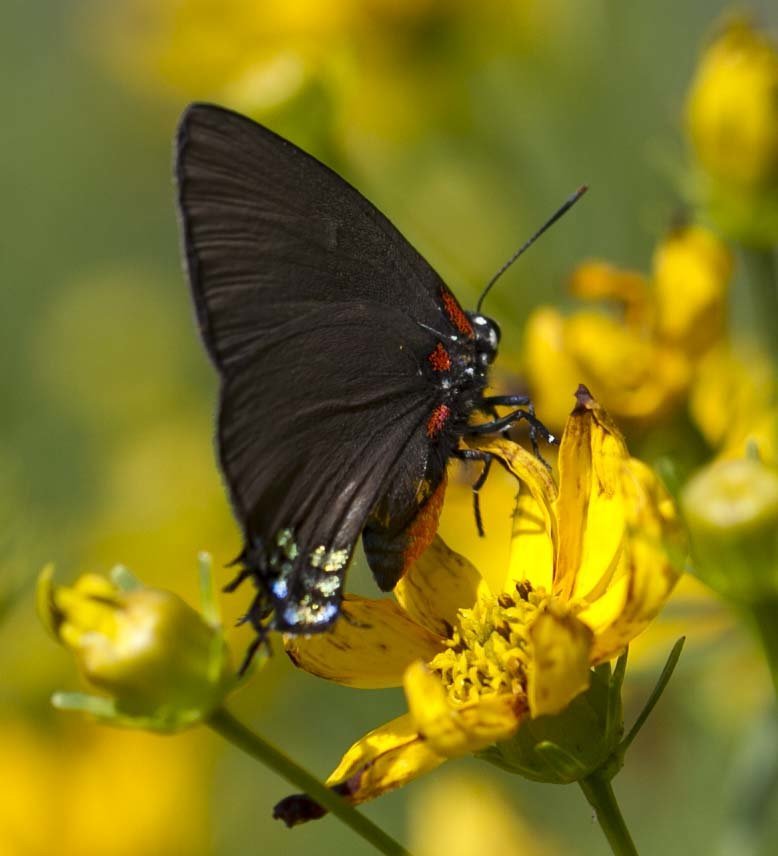 A second photo by Beth P of her find. Will we have to wait another 128 years for our next great purple hairstreak? Let’s hope not!

This entry was posted in Host Plants, Lycaenids. Bookmark the permalink.