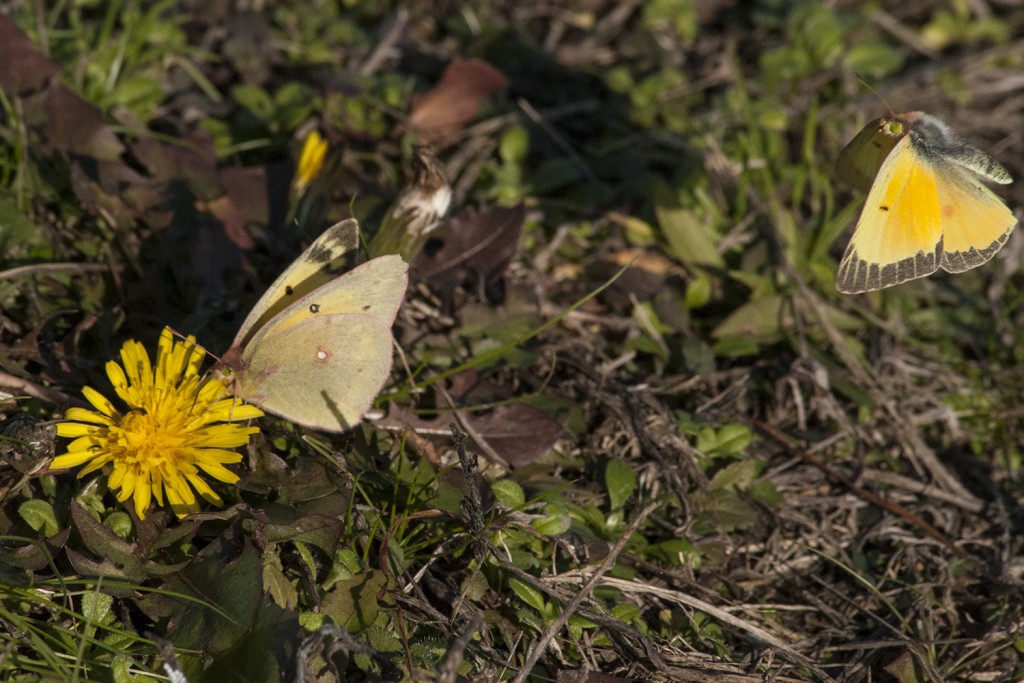 A wonderfully instructive photo of orange sulphurs by Chip Krilowicz at Gloucester County Dream Park on December 7. The male in flight on right shows orange on his fore-wings; the female on the dandelion shows the thick black border of her species. Don’t you wish identification of our local sulphurs was always this easy?

Hidden in the swirl of more exciting finds this month has been a surge of reports of both orange and clouded sulphurs.   We already have more December reports of these two than in any of our previous seven Decembers — and we could soon log more sulphur reports this month than in all seven previous Decembers added together.

With warm weather predicted again for this week and for the coming weekend — following last weekend’s shockingly seasonable temperatures in the 30’s and 40’s — we could see more of both species.

And that means it’s back to the challenge:  What do you call that mid-sized yellowish butterfly out there, fluttering tirelessly across the open field — C. eurytheme, the orange sulphur, or C. philodice, the clouded sulphur?

Our local observers agree with the standard field guide advice that the presence of orange on the dorsal fore-wings is the most helpful distinction (at least in NJ, where other Colias do not occur).  If you see a butterfly that you recognize as one of the two, and you see even a tiny splash of orange, you can call the butterfly an “orange sulphur” with reasonable confidence.

The orange seems a “sufficient but not necessary” field mark, however.  If you see it, good; if you don’t see it, keep looking.  The absence of orange does not necessarily mean the butterfly is a clouded sulphur.  You need other cues.

The next best field mark seems to be the width of the black borders on the dorsal fore-wing — and the contrasting pattern of dark dots on the ventral side. 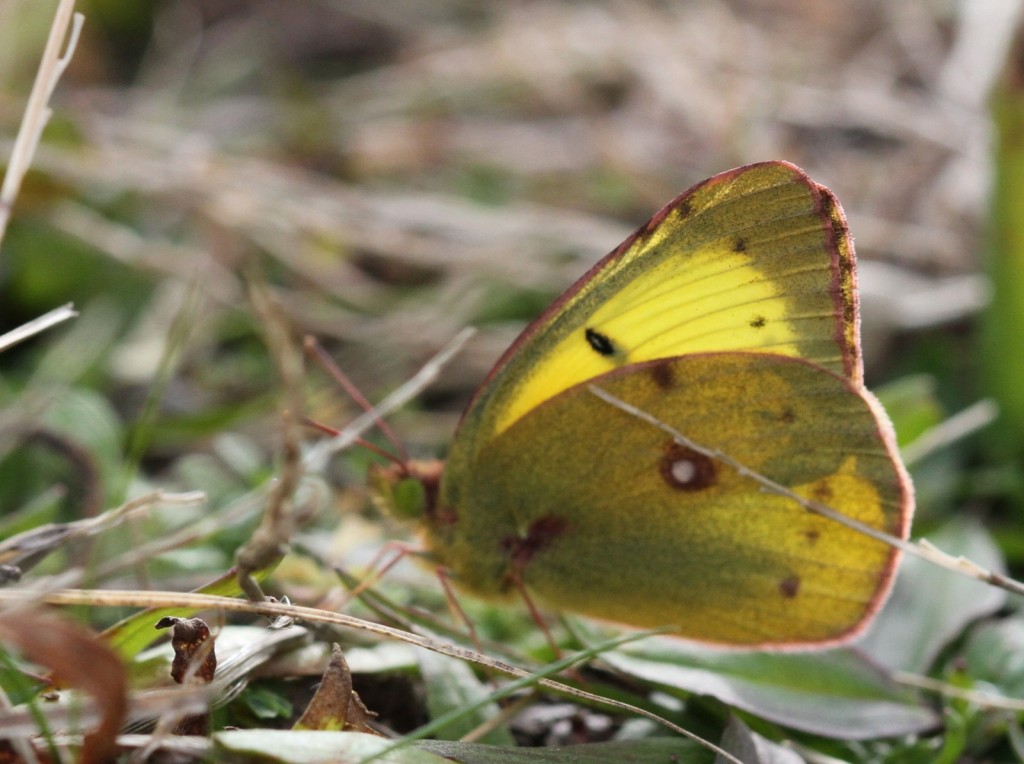 This clouded sulphur, photo’d by Dave Amadio on December 12 at the Riverwinds River Trail in GLO, shows the “textbook” field marks of the species:  the narrow black border on the fore-wing standing outside the line of dark spots (the topmost spot is just touched). 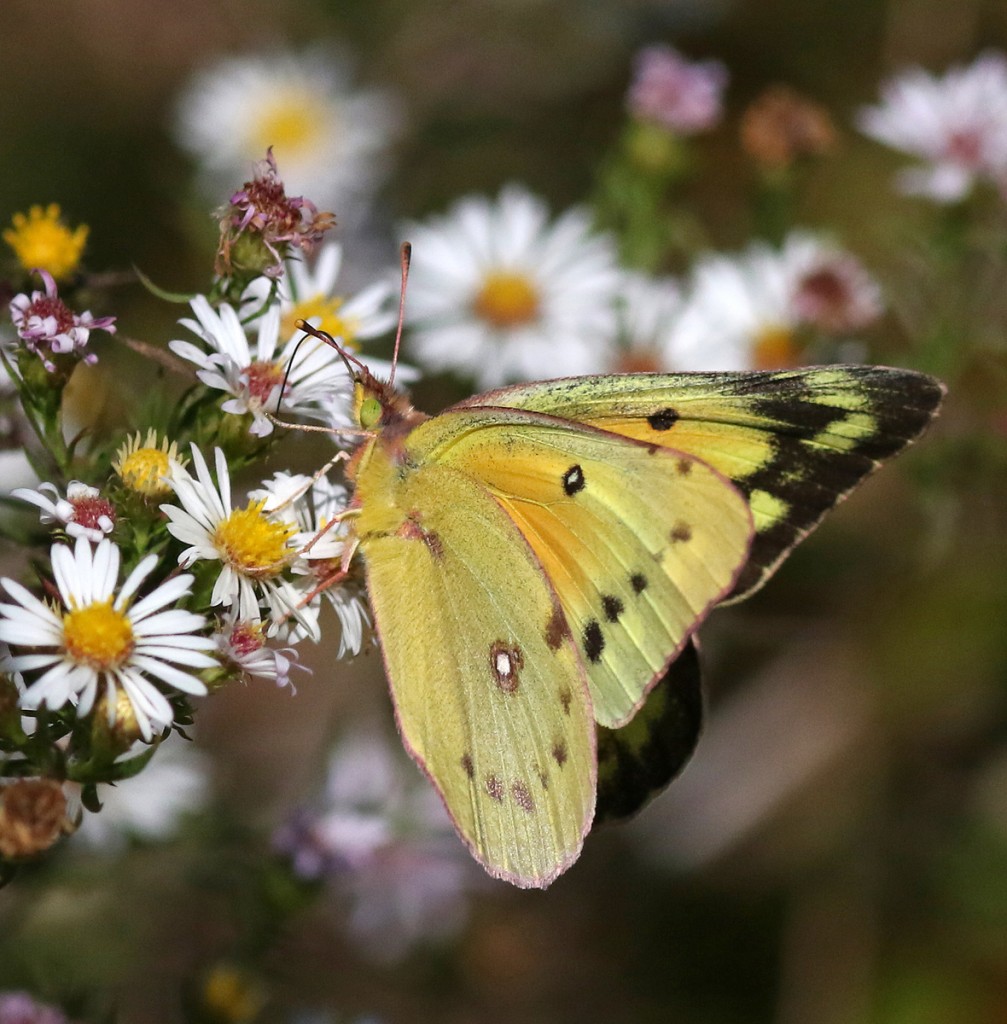 A “textbook” female orange sulphur photographed by Harvey Tomlinson at Coxhall Creek, CMY, on 10-15-15. The orange is obvious here, but look closely and you can also see the thickness of the black borders (especially on the closer, left wing) overlapping the line of dots.

Chip Krilowicz recommends Randy Emmit’s website, Butterflies of the Carolinas and Virginia, for excellent photographs and details to help you study this key difference:

Jack Miller finds the black border differences valuable when they can be seen, “If I can, I go by what the field guides say and call narrower bands ‘clouded.’  The hind-wing comparison in Glassberg’s 1993 guide is a great example of the differences in the see-through black bands.”

He adds, however, “It can be quite difficult to see the black band through the wing,” and notes that he often uses color and size impression to help him make the call:

“I want to see them flying, and then the first thing I look for is lemon yellow.  If it’s not really bright yellow, my doubt alarm goes off.  Conversely, if it shows strong orange, I am willing to say ‘orange sulfur.’

“Second, I think that cloudeds look smaller and more delicate.  I see oranges as ‘chunkier.’

Like other sharp-eyed field veterans, Dave Amadio believes in the value of on-the-spot evaluations, “My advice is the same as is often given to birders. Do your best observation in the field.  Often digital images can distort color one way or another and excessive post processing can confuse others who look at the submitted images.”

He adds that differences can be subtle, especially at this time of year:  “Late-season examples of these two sulphurs have to be given increased scrutiny if possible. Many orange sulphurs with worn scales are deceiving. Unless key field marks are observed, it is best to post them as sulphur sp. in my opinion.”

The ID call is made still more difficult by hybridization.   When Harvey Tomlinson notes, “I have seen some individuals that do not fit cleanly into an ID,” and Steve Glynn reports that he sometimes go back and forth on his IDs while looking at his photographs, they are speaking for everyone who has ever looked carefully at sulphurs in South Jersey.  They are also supporting the conclusions of the latest research.  Not all Colias can be identified to species, even fresh individuals seen and photographed close at hand. 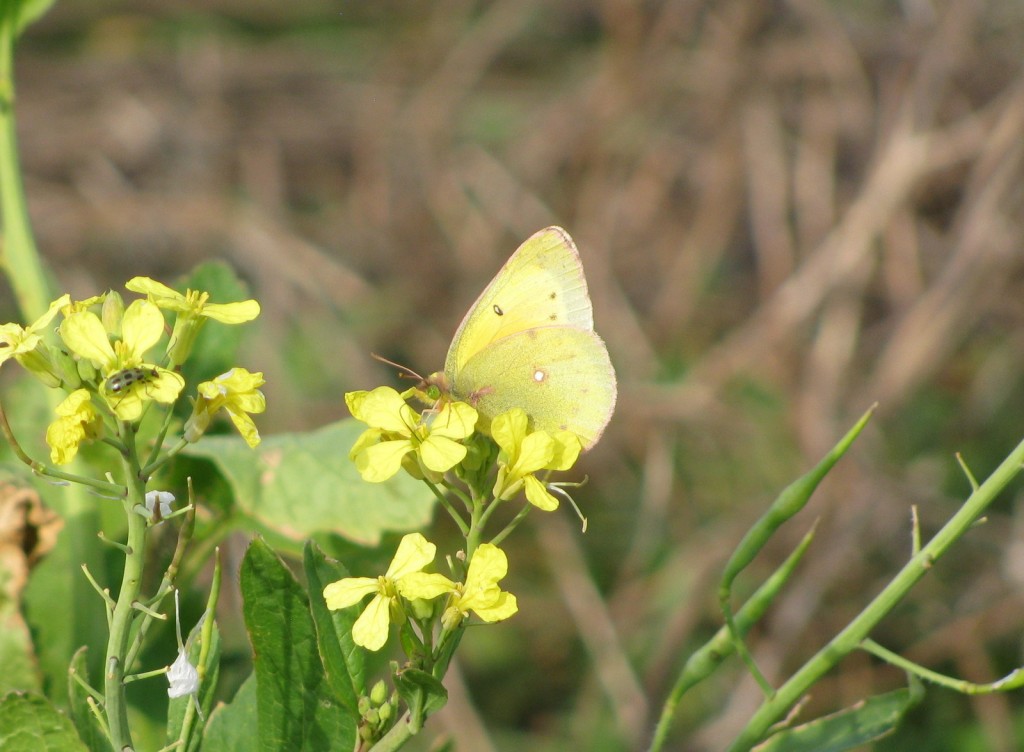 Steve Glynn photographed this sulphur in Greenwich, Cumberland County on December 13, and notes that he has gone back-and-forth on its identify: orange sulphur or clouded? Could it be both?

The lepidopterist Arthur Shapiro has studied the C. eurytheme and C. philodice complex his entire professional career.  He reported in his Butterflies of the Delaware Valley (1966) that the two regularly hybridize — “producing specimens with variable size and border, but ground color intermediate, and intergrading completely….they [hybrids] are found at all seasons.  The frequency of hybrids varies between 15 and 25% of the individuals in our area.”

In the decades since Shapiro’s first publications the technology used to identify hybrids has become far more sophisticated – and now employs molecular chemistry.  Just this June (2015) Shapiro co-authored a paper on the topic in the journal Ecology and Evolution: “Molecular evidence for hybridization in Colias (Lepidoptera: Pieridae): are Colias hybrids really hybrids?“

You can read the article in full at the link below.  The authors (lead author Heather E. Dwyer of Carnegie Mellon University) believe the answer to their sub-title question is yes and that three species are involved — C. eurytheme, C. philodice, and a third they call C. eriphyle, the yellow sulphur, a western population that some other sources consider a sub-species of clouded sulphur (philodice).  Apparently, the three groups hybridize coast to coast, wherever their ranges overlap (which includes all the U.S. except peninsular Florida and parts of California).  The overlap dates back to the 1920s  and 1930s when the orange sulphur, C. eurytheme, expanded rapidly northward and eastward out of its ancestral range in the southwestern United States — taking advantage of the cultivation of alfalfa.

The good news for field observers is that the cutting edge genetic analysis (“amplified fragment length polymorphism marker analysis”) described in Dwyer et al suggests that Shapiro’s estimates from the 1960s were a little high.  Only about ten per cent of the individuals captured and analyzed have been found to be hybrids.

The bad news is that many hybrids can be visually inseparable from non-hybrids – and that intermediate forms, apparently showing a mix of features (“putative hybrids”), often turn out not to be hybrids at all. (Individuals with orange in their forewings, for example, can be found in areas where orange sulphurs do not occur.)

In short, this latest study supports Jeff Glassberg’s comment in his Butterflies Through Butterflies books when he notes that even the orange on the fore-wing can be questioned as a certain field mark for orange sulphur.  “Because [hybridization occurs so frequently], calling all individuals with orange above orange sulphurs is only an operational definition.”

Thinking about these details may seem, at first, a little depressing. If one in ten Colias is a hybrid, how do we trust our lists, the data we are compiling, or our own eyes, for that matter?

But, on the other hand, the details make a fascinating puzzle.  The populations have not swamped each other so much that they have not become a single species.  Why not?  What keeps them – 90% of them, at least – separated?

And all of us who are birders (which might be every member of our group) have adjusted to the news from a couple of decades ago that black and mallard ducks hybridize at frequencies close to these sulphurs and that members of the “herring gull complex” also hybridize regularly.  Those of us interested in botany also know that oaks (and species in other genera of other South Jersey plants) hybridize so frequently that definite identification to species is not always possible.

Finally, what’s wrong with being among those hippest of butterflyers who recognize that visual identification is not ultimate knowledge — and that identifications of the Colias and other difficult species must be done with some caution and a sense of humility?

For the full article by Dwyer, et al, go here:

Molecular evidence for hybridization in Colias (Ecology and Evolution, June 2015)

For some useful comments by Ron Gatrelle on the Carolina Butterflies page:

And here’s an interesting discussion on Bug Guide (among many on the problem that you can find at the site with some clicking and surfing on BG):

1 Response to The Colias Conundrum