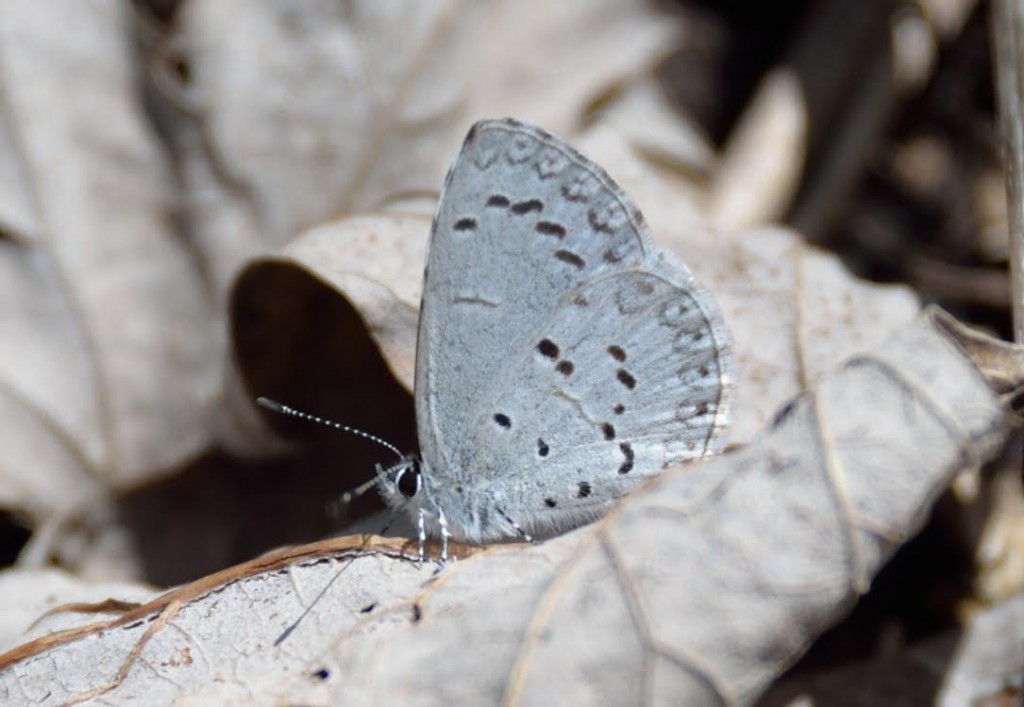 From the spring of 2008 through the spring of 2013 we logged a total of fewer than half a dozen reports of summer azures in their spring form for all six years combined.  As of April 18, we have 8+ certain or likely records of them in half a month.

Is 2014 an unusually good year for what we have assumed was a rare form in South Jersey? Or, is the difference in our “eyes”?

Are we finding more this year because some of our most careful observers are learning what to look for?

I have added “apparent” to these photos, because David Wright, who has very helpfully provided the IDs, uses qualifying words for each.  He explains that it is very difficult to distinguish Celastrina neglecta in spring form from C. ladon, Edward’s azure, in those areas in South Jersey outside Pine Barren soils where dogwood (ladon‘s host) grows in the wild.  On the Inner Coastal Plain, our western side — Salem, Gloucester, Camden, and parts of Burlington — C. ladon flies in early spring at the same time as C. neglecta.  (Dogwood also grows here and there in the soils east of the Pine Barrens that extend up our easternmost edge from Cape May north along the thin slice of land that Witmer Stone called “The Coastal Strip.”)

The most reliable distinction between ladon and spring neglecta cannot be seen in photographs: it is a difference in their scale morphology, seen in hand by microscope.

David also has predicted a late emergence for holly azure, Celastrina idella, this year — based on the late winter and that both our common hollies — American holly (Ilex opaca) and inkberry holly (I. glabra) — are still in winter bud. 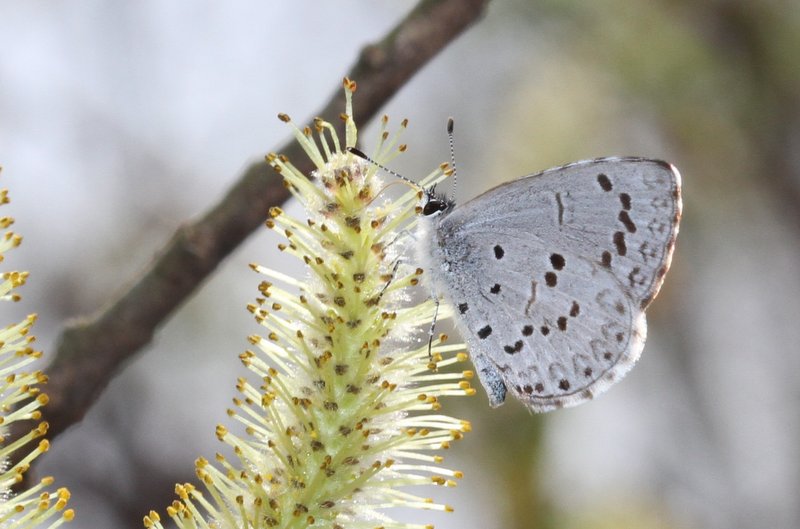 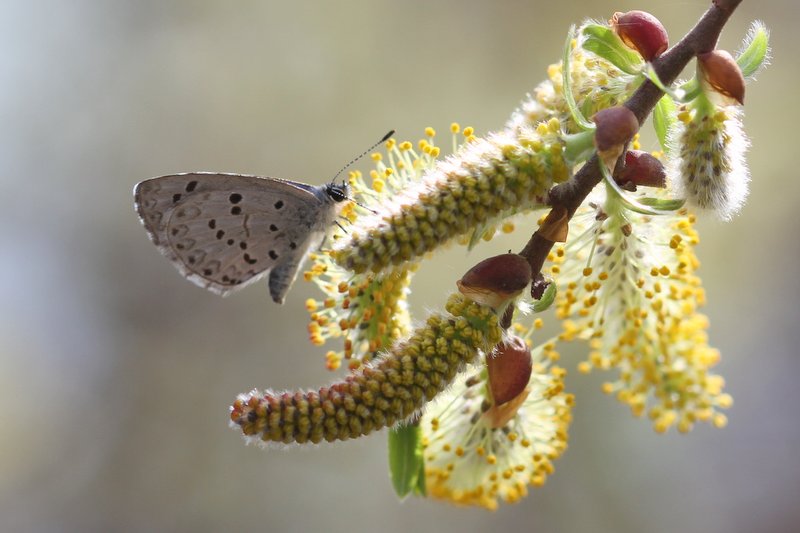 Same individual as above, photo by Dave Amadio, April 13. (And a pretty shot of the willows as well!) 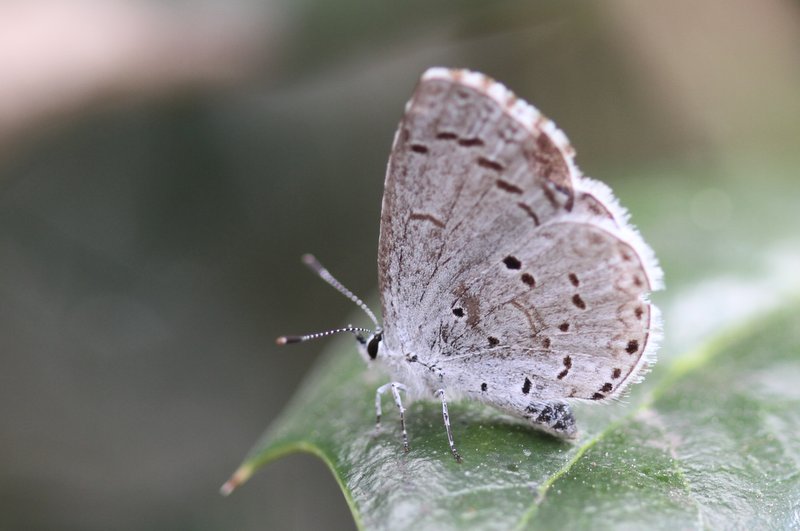 Apparent summer azure, spring form (a different individual than above) photo’d by Dave Amadio is his backyard in West Deptford (GLO) on April 14, 2014. 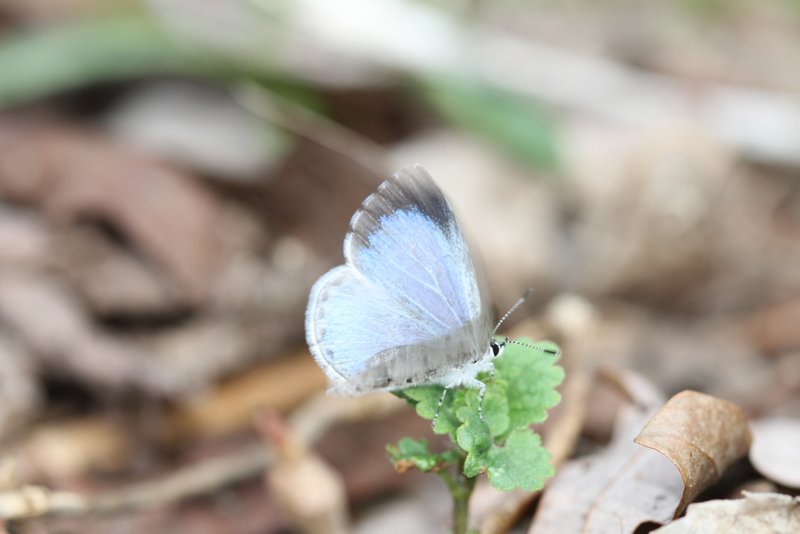 Same individual as above, showing top-side blue (and black margins that prove she is a female). Photo by Dave Amadio, April 14.

You can also see two photos of this form by Will Kerling at the previous post below.

If you like a challenge, go to the Pavulaan and Wright article at the link below and scroll to page 2, the plate of specimens, then hit the + sign a couple of times so that you can see the butterflies but cannot see their identifying captions. Can you find the one individual on the plate that best matches Gibson’s and Dave’s photos here:  the one spring form/summer azure on the plate?  Only one of the numbered specimens is that form.

For an even tougher test, you can try making your guesses at all five species on the plate. All four of our South Jersey species are illustrated, as well as one species not found in our area, C. neglectamajor, the Appalachian azure.

Some mnemonics that might help with the scientific names:

Blueberry azure = C. lucia [“blue suggests lu”]
Summer azure = C. neglecta [given that name originally because it had been neglected by science, and maybe our experiences this year on our log suggest we have been neglecting it as well, at least in spring]
Edward’s azure = C. ladon [“Ed is a lad”]
Holly azure = C. idella [ideal = perfection to Pavulaan & Wright, who named it]

A shout-out here to Will Kerling for his contributions to the discussion and for passing along David Wright’s emails to him.

Ok, that’s enough on this complex for now! Hopefully, we will shortly be celebrating duskywings and how easy they are to ID!

This entry was posted in ID Challenges & Tips, Looking At Our Data, Lycaenids, Photo Forum. Bookmark the permalink.