A Renewed Focus on Working Families By Deborah M. Figart 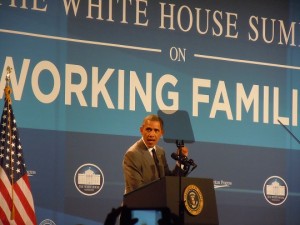 A panoply of policies—from raising the minimum wage to paid family leave—to help Americans better balance work and family “shouldn’t be bonuses, they should be part of our bottom lines.” And “twenty-first century families deserve twenty-first century workplaces.” These were two key phrases from President Barak Obama’s address delivered to the White House Summit on Working Families. I had the honor of being invited to attend this event alongside roughly 750 policy makers, business leaders, academic experts, and activists on June 23, 2014, in Washington, DC.

The President made two policy announcements at the event.

First, he would return to the White House and sign a presidential memorandum to require all federal agencies to expand access to flexible work schedules. The federal government is the nation’s largest employer with 2 million workers on the payroll. Only 15 percent of them (300,000) work in the nation’s capital. (Walmart is the nation’s largest private sector employer with 1.4 million workers in the U.S.) The Obama Administration seeks to demonstrate that the federal government can serve as a model employer, just as the President has done with two other recent initiatives: raising the minimum wage for federal contractors and making pay transparent by prohibiting retaliation against workers for discussing their salaries with one another.

Second, President Obama pointed to the difficulty faced by some adults covering child care costs while considering federally-funded job training or retraining programs. Working parents, he argued, should not have to choose between taking care of their children and trying to train for a new career. To make it easier, the President announced that he asked Secretary of Labor Thomas E. Perez to make available technical training grants to low-income individuals training for in-demand industries.

I was very interested to hear from panelists from a wide variety of businesses in the U.S., including CEOs from accounting firms, a craft brewery, a bookstore, restaurants, technology firms, and entertainment companies. These leaders detailed aspects of their workplace policies and programs to help employees balance work and family. Each one discussed how their policies have helped recruit new talent, lower turnover, increase productivity, reduce absenteeism, and increase profit. One executive said that in her company, when she offered unlimited sick time, the usage of sick time actually declined!

What realized these efforts, according to the business leaders, was not merely the commitment of the top of the organization, like the CEO and the Board, but the middle of the organization. When middle manager performance was tied to how well they were helping employees achieve balance, businesses did better at achieving this goal. A phrase repeated several times was that “employees bring their whole selves to work.” They just don’t shut off their home lives at 9:00 am and pick them up again after work.

As an economist, I wanted more than anecdotes. So I was keen to hear what Betsey Stevenson, member of the President’s Council of Economic Advisors, had to say. She reviewed the empirical evidence on the impact of family-friendly policies on the economy and the business bottom line. The evidence is summarized in a series of new fact sheets and reports published by the Council of Economic Advisors, with titles such as “Work-Life Balance and the Economics of Workplace Flexibility,” “The Economics of Paid and Unpaid Leave,” and “Nine Facts About American Families and Work.”

President Obama is obviously frustrated with the gridlock in Washington. And the President recognizes that turning a bill into a law takes time. The Family and Medical Leave Act of 1993, signed by Bill Clinton, was first introduced in 1985. He is utilizing tactics to try to move policy along as much as his executive powers allow without the legislative branch. It also seems to me that he employing skills from his early career as a community organizer, acting as “Organizer in Chief.” That’s because his initiatives can only be sustained in the long run if policies discussed at the White House Summit become dinner table conversations around America that lead eventually to legislative action at the state or federal level and/or voluntary changes in how businesses operate.