By Darya Hrybava, Events and Communications Specialist at the William J. Hughes Center for Public Policy

It was a very special week for me, as I successfully passed my naturalization test and became a U.S. citizen. My naturalization ceremony took place on the same day, which is rather uncommon. In most states the ceremony happens about six to eight weeks after the interview, but New Jersey is one of two states that offer the opportunity of having both the test and the ceremony on the same day. Also, it was interesting to learn that naturalization ceremonies can take place not only in a federal courthouse or immigration offices, but in many other locations as well, such as schools, stadiums, and even on boats. For example, Stockton University hosts naturalization ceremonies. Some of the ceremonies feature special speakers and can last many hours. Mine was quite small and short, but I was quite happy about it, as I could not wait to become a citizen. 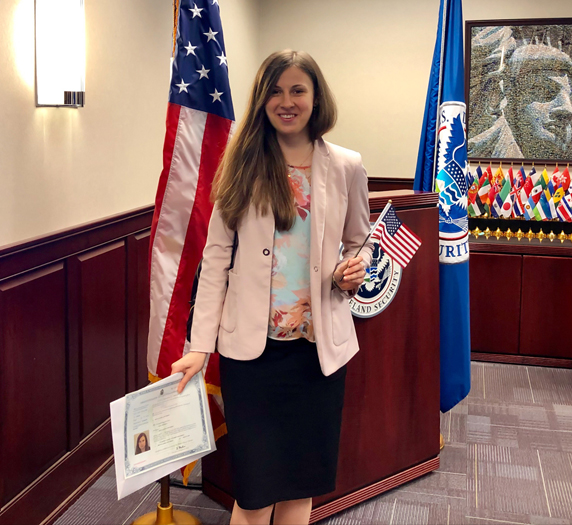 Part of the naturalization test is the civics exam. I knew most of the answers to the questions in the book that I was given to prepare for the test, as I have a B.A. in Political Science and work in the Hughes Center that conducts research on public policy and promotes civic engagement. However, it was still very interesting to learn about various parts of U.S. history. It made me feel all the more connected to and appreciative of this place I call home. It is somewhat dismaying that research studies, including some conducted by the Hughes Center, show low levels of political knowledge and engagement among American citizens. Perhaps a basic civics class should be added to the standard American public education curriculum.

At the ceremony we were told that afterwards we would be able to register to vote right outside of the room. Because of my work over the last few years in the Hughes Center for public policy, which encourages people to vote and participate in the democratic process, I am well aware of the data that show that voting rates are quite low among eligible voters. I therefore thought I should set a good example and register myself to vote. I did not expect that many people who took the oath with me would do the same, but I was pleasantly surprised to see a long line by the registration table. The right to vote is both a privilege and a responsibility of citizens, and I am honored to be able to participate in a democratic process that is unfortunately unavailable to many people around the world.