The Aztecs built the beautiful city of Tenochtitlan around 1325 a.d. Tenochtitlan was founded on an island in the center of Lake Texcoco, a fresh water lake. Because Tenochtitlan was an island, the Aztecs ran out of room and had to move out onto the lake areas, especially for the agricultural needs of the city. The Aztecs are known for their agricultural ingenuity of ‘chinampas’ or floating gardens. Tenochtitlan also had causways, dikes, and canals that were also built by the Aztecs. The city flourished and had an estimated population of 200,000 people. 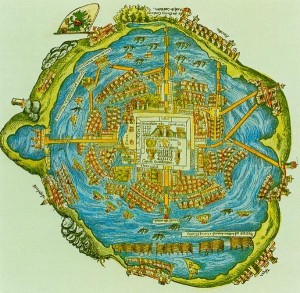 Aztec city of Tenochtitlan, found in the fresh water lake of Lake Texcoco.

Aztec farming has become most famous because of the brilliant chinampas system that Aztec farmers used. Certainly there were a number of techniques used in the Aztec empire. But with the great city of Tenochtitlan built on swampy but rich ground, the chinampas became key to the food production of the people. Chinampas were, of course, not just used for the capitol city, but throughout the Valley of Mexico around the lake bed. As the empire grew, more sources of food were required. At times this meant conquering more land, other times it meant expanding the chinampa system. 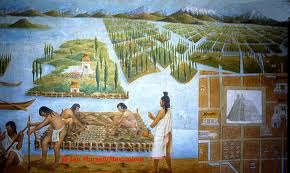 The chinampas system was extensive, these floating gardens were responsible for helping feed the Aztec nation.

To build the chinampas, plots about 30m by 2.5m were staked out on the lake bed. A fence was woven between the stakes, and the area would be filled in with mud and vegetation. The next rectangle would be parallel to this one, with room for a canal in between, where canoes could pass through. These canals of course offered irrigation, and provided food of their own such as fish and water fowl. Often willows would be planted along the edge of the plot, to provide further stable fencing as well as shade though they would be carefully pruned to allow enough sunlight into the farm plot.In the end, the garden plot would be no more than a few feet above the level of the lake. They were supported with the Aztec’s complex irrigation and waterway systems, which included dams, aqueducts and gates. 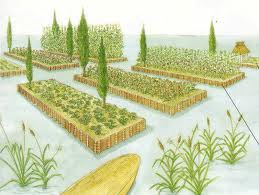 There were different types of farmers in central Mexico at this time. You could describe some of them as labourers, and others as specialists. Labourers were of various types, some who basically worked as farm hands or even slaves, others who were responsible for the community farms. Specialists would be responsible to know what seeds were the best, how the crop rotation should work, and what would grow best on what land. Fertilization and irrigation was also important, and the land would often be fertilized with human ‘manure’. 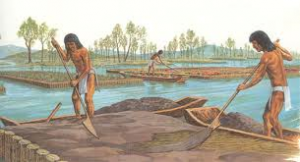 Different memebers of Aztec society held different jobs, crucial to the forward progress of the civilization.

Aztec exchange has generally been discussed in terms of three institutions: long distance trade, marketplace trade, and tribute. Long distance trade between the Aztec heartland and the distant areas was carried out by professional traders known as ‘pocheteca’, although they were not part of the hierarchy of the Aztec society they were still held in high regard. Marketplace trade was highly developed with periodic markets found in most towns, and huge daily markets in the largest cities, with features such as currency use, which was accepted as either cocoa beans or cotton mantles. Tribute was essentially a tax placed on all commoners who were obliged to pay for their nobles and military. Essentially these ‘tributes’ or taxes funded the continuation of Aztec society. 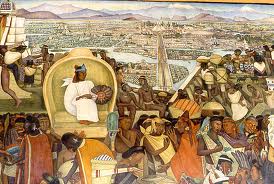 Depiction of Aztec heirarchy and their trade culture.

3 thoughts on “Agriculture and Exchange”