Hernando Cortez’s discovery of the Aztec empire revealed an extremely advance and complex culture then credited for. The immense size and population emulate other great societies of their time as well as intricate jewelry and clothing. Societies surrounding the great city of Tenochtitlan specialized in food production and specialized crafts such as weaving cloth or making obsidian weapons/tools. 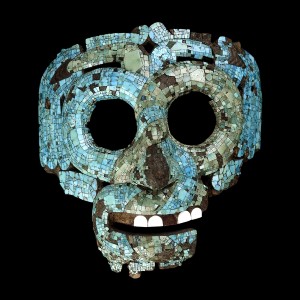 This Mask represents Quetzalcoatl, one of the gods responsible for destroying a monstrous creature, Cipactli 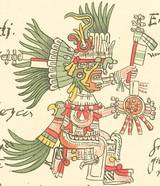 Huitzilopochtli, god of sun, war and patron god of Tenochtitlan. He is usually depicted covered with humming bird feathers, and fully armed with a serpent-like scepter.

The Aztec warrior-centered culture reflects their polytheistic beliefs and sacrifices required to appease the gods. Quetzalcoatl is just one of many Aztec gods, however the main ‘blood thirsty’ god of war, Huitzilopochtli, require blood sacrifices to replenish the soil. 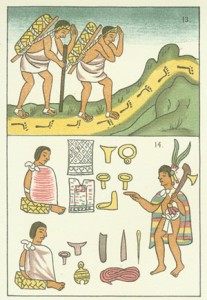 This picture displays images of noble status, as well as commoner (seen sitting below) and lower classes (depicted above).

Social hierarchy in Aztec society was stratified into different classes of individuals. People of noble class display this through intricate jewelry and clothing. Priest, landowners, warriors and other powerful individuals would occupy the highest class in Mesoamerica. People below this status in society would pay tribute, through goods and physical labor. Individuals could also be sold into slavery as reciprocity for a previous debt or crime. 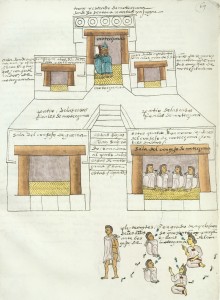 Moctezuma, ruler of Tenochtitlan, and his high council below sitting in his palace.

Mesoamerican society consisted of many different city-states that constantly warred over territory. The ruler of a city-state would be appointed by a high council that consisted of relatives of the previous ruler. A conquered city-state would be required to give tribute to the victorious state. Tribute varied from labor and human sacrifice to good such as weapons, clothing, tools, food and jewelry. The trade of goods flowed into large cities where they would be sold at markets and used to sustain the high populations in urban centers. 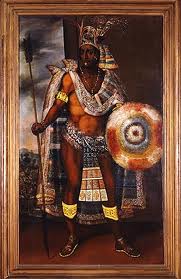 In this Europeanized depiction of Moctezuma (painted in 1519) he is shown wearing an intricate woven cape, with a lavish feather headdress and shield. The Aztecs very much used different materials as a sign of social class, such as a leader with gold jewelry or a warrior with a leopard skin outfit.