Buzby’s General Store:
The Evolution of a Cultural Center

Since 1897, the General Store in Chatsworth, NJ has been called Buzby’s and has been a staple of the Pine Barrens. The Buzby Collection in Stockton’s Special Collections brings together sales receipts, invoices, photographs, newspaper articles, and other intriguing bits and pieces of old documents to tell two stories about the store that are both unique and interrelated. First, the Buzby Collection chronicles the store’s evolution from its purchase by Willis Jefferson Buzby in the 1890s to its most recent renovations in 1998 by Marilyn Schmidt. Along with this story come interesting glimpses into the workings of businesses over time, suggesting how the store and its owners adapted to meet customer demand.

Underneath this narrative lies the story of the evolution of a cultural center. In an era before shopping malls, supermarkets, and the internet, Buzby’s General Store served a dual-role: fulfilling its community’s shopping as well as social needs.

During the 1800s, it was rare to see a general store in New Jersey’s Pinelands. Buzby’s provided its customers with an unmatched level of access to groceries and day to day supplies that, before its founding, were either produced within Chatsworth itself or were otherwise difficult to obtain. Because of its exclusivity, Buzby’s grew into the cultural center of Chatsworth, where its citizens would go primarily to shop, but also to socialize with members of their community. 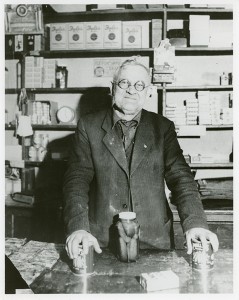 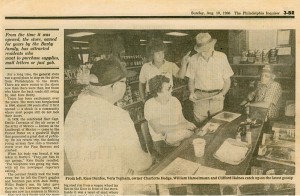 Buzby’s, which has often been referred to as the “Capital of the Pines,” gained its nickname for many reasons. The general store served as a community-gathering place for many of the local people. For decades it was the only place to buy groceries in a ten-mile radius of Chatsworth. They would get their news through weekly newspapers purchased at the store, but also through conversation with other visitors to the store. Buzby’s was a perfect place to have a picnic with the family or hang out with the rest of the guys and catch up. In the early 1920s the railroad came to Chatsworth bringing more traffic to the general store: people now had access to the small town in the pines from New York and Philadelphia and all the way down to Atlantic City. 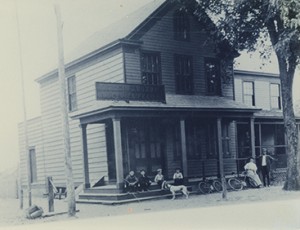 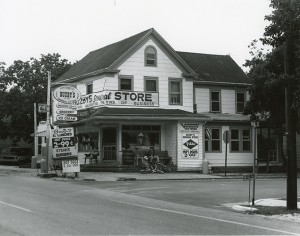 Benjamin O. Wade had built a general store and home in the center of Chatsworth in 1865 and ran the business until purchased by the Buzby’s in 1897. Although the building is nearly a century and a half old and has had several owners over the years, Buzby’s remains much like it was back in the late nineteenth century. The store has been renovated several times to accommodate the changing needs of the people. For example, in the 1920s the popularity of the automobile encouraged Buzby’s to begin selling gasoline. The store also had one of the first telephones in the area. As time moved on the roads were paved and electricity was brought to the small town, the world was changing, so the store began to shift gears as well. Nevertheless, it still retains much of its original look and atmosphere. 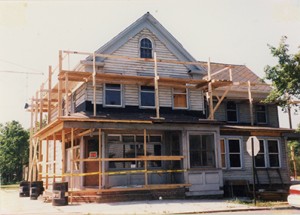 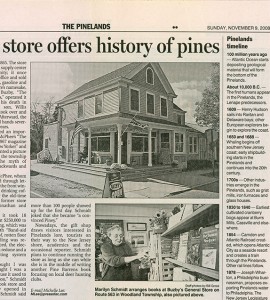 Major renovations to the store took place around 1921 when the cornered door was added and large storefront windows were installed. With minor renovations in between, the next major renovation took place in 1998. The roof was replaced and the building rewired; the siding was restored, heating and cooling were updated, and the original ceilings and walls were renovated. A handicapped accessible bathroom and wheelchair ramp were also added. A commercial kitchen was added, floors were redone, and the brick porch was removed, restored to the wooden porch that had been there in the 1900s. Even one of the original display counters is still being used, although most of the original furniture and fixtures are long gone. This most recent renovation seemed to have the goal of capturing the original essence of Buzby’s by restoring the old instead of remodeling with the new.

Historical documentation can be tricky. The Buzby Collection contains a necktie identified as having been owned by George Buzby. The envelope that preserves the tie credits George as having been the owner of the Dennis Hotel in Atlantic City. He is presumably related to the Chatsworth Buzbys, although not mentioned in other documents within the collection. The website Find A Grave, lists a George H. Buzby as the deceased brother of Walter J. Buzby II, who was owner of the Dennis Hotel of Atlantic City. Another source, The Press of Atlantic City, names a George Buzby as the grandson of Walter J. Buzby, II. Which George Buzby owned this tie is not known. Also unknown is the age of the tie. The mysterious nature of this artifact raises several questions, most about its history, but also about more practical concerns: how does one preserve and research an item like this?

This advertisement was sent to Willis J. Buzby in an attempt to solicit his business. Anyone who has spent much time browsing the internet is aware of this marketing strategy used by advertisers to lure the unwary into believing they have won something, only to promptly separate them from their money.

A large portion of the Buzby Collection consists of receipts and return forms from Buzby’s business, which provide a sense of how business transactions occurred in the past as well as the items Buzby stocked in his store at different periods. The other portion of documents consists of letters addressed to Buzby from businesses attempting to persuade him to carry their products.

As seen in this advertisement, dated from the early 1900s, as well as others in the collection (namely the “Break-up-a-Cold Tablets”), marketing strategies have not always progressed far over the past 100 years.

Milk, eggs, flour, bread, and butter . . . Sounds like the start to an average grocery list, right? You would be correct (of course) in assuming this, but what is fascinating about the list lies in the date it was written, not its contents.

This ledger book dates from the 1890s and was used in Buzby’s General Store to keep track of customers’ purchases. The people of Chatsworth relied on Buzby’s to provide them with their daily necessities, from the aforementioned items, still commonly bought today, to less common items like animal feed and lard. Instead of paying at the time of purchase, customers paid off their total tab at the end of a specific interval. While this method of payment might seem like an easy way for customers to dodge bills, it actually reinforces the idea of the close-knit community that centered around Buzby’s General Store.

In its early days, Buzby’s received most of its business from repeat customers, as seen by the recurring names in the ledger. Since Buzby’s base of customers was so small, it is easy to imagine that Buzby and his customers grew to know each other very well. As such, the chances of shirking a payment seem quite slim.

Chatsworth used Buzby’s for its official business as well. There were not many other places to congregate in this community, so hunters in December would bring the deer that they killed to the store to have them hung, weighed, and registered; otherwise they faced heavy fines and confiscation of their deer. The store was one of the main focal points for John McPhee’s The Pine Barrens (1968). McPhee came to the store to observe the people and ask questions about the area in an effort that ultimately helped demonstrate the importance of the Pine Barrens to New Jersey. Today the store serves as a restaurant and general store, but most importantly it still brings people together. The store sells various cookbooks, artifacts, and historical works about the Pine Barrens. It indeed lives up to its reputation as the capital of today’s Pinelands. 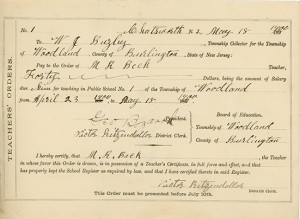 Willis J. Buzby was called King of the Pineys—and that title wasn’t just for show. In the early years of Chatsworth, Buzby’s General Store was a cornerstone of life in the Pine Barrens; people depended on it for food, clothes, and many other necessities. Buzby was even responsible for paying the local schoolteachers, as these vouchers show. These documents, in addition to revealing the importance of Buzby’s, also provide some insight into the lives of teachers in the 1800s and 1900s. The vouchers give the names of the teachers, how much they were paid, and in what years—all valuable historical information. 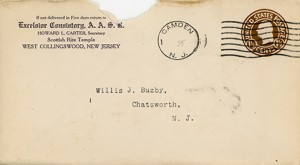 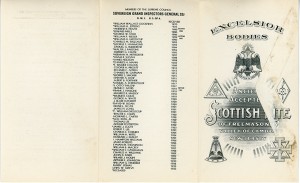 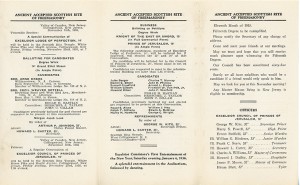 While most of the documents in the Buzby Collection discuss Willis Jefferson Buzby in relation to the duties he had in running his general store, some documents provide an insight into Buzby outside of his store¬—as a person who held significant influence in his community. As a storeowner, Buzby received several letters from companies urging him to stock their products. Outside of his business, people sometimes asked Buzby for special favors. One example of his standing in the community is the letters in the collection specifically addressed to Buzby from local politicians seeking his support for their election bids.

Other documents in the collection show what organizations Buzby dedicated his time to when he was not busy running his store. This letter addressed to Buzby is from the Ancient Accepted Scottish Rite of Freemasonry, alerting him to a meeting scheduled to take place on November 22, 1935 in Collingswood NJ. The Scottish Rite of Freemasonry is an institution that has been around since the early 1700s and currently has 550,000 members throughout the United States, alone. This letter is fascinating because, apart from its attention-grabbing imagery (two-headed eagles?) and a full list of the branch’s Supreme Council members from 1870-1935, it is an artifact to a long-standing and honored institution. From this document, as well as others, a better sense of Buzby as a man with interests and duties besides running his store takes shape. 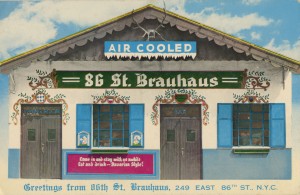 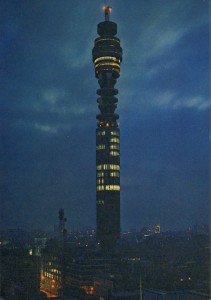 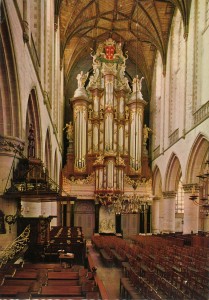 The Buzby collection focuses not only on the Buzbys who were involved with the general store, but also on other members of the Buzby family. Family photos, letters, and postcards provide details about vacations and the goings-on of their day-to-day lives.

The postcards were sent from a wide-range of locations including the Netherlands, New York City, London, and France. These postcards sometimes include amusing details in their messages. One of the writers emphatically points out that he got to sit in FRONT of former Vice President H. H. Humphrey at a play while another cryptically asks the recipient to ignore the first two cards, remarking: “I wasn’t drinking.”

Willis J. Buzby, owner of Buzby’s General Store, was a very important figure in Chatsworth and the surrounding Pine Barrens. This 1939 article about his death shows how highly regarded he was by his community—and his contribution to later generations. Although it may not have been his intention, Buzby created through his store a historic site and a community-gathering place in the Pines, which remains to this day.

Buzby’s General Store in Chatsworth, NJ has operated since it was built in 1865, and has had several owners in that 150-year period. However, the store was closed and vacant from around 1990 to 1998, when its current owner, Marilyn Schmidt, purchased the store. Schmidt is a pharmacologist, publisher, and author. She restored, renovated, and reopened Buzby’s. This article, published in 2008, relates her experience with the store, as well as her hopes for its future. Schmidt planned to ensure that the gift shop would carry Pinelands books, arts, and crafts, as well as serve as a Pinelands resource center. She hopes the store will remain a community-gathering place and last for another 100 years. As of today, Buzby’s remains open, and Schmidt has been seeking a new owner for the store since 2011. The most recent restoration of Buzby’s should serve as a reminder that history is all around us, and much of it is in danger of being lost. Restoring and preserving historical artifacts, whether books or buildings, is an invaluable contribution to society and future generations. All that is required are people willing to make the effort.