Abundant Elsewhere, Why So Rare Here?

European skipper photo’d by Will Kerling on 6-8-13.

Will Kerling’s recent find of European skipper in Cape May Courthouse makes the first report for this year and only the third of the last three years. In fact, we have had so few other sightings in our 5+ years of logging that all can be listed quickly:

Three reports in 2010, one from Atlantic County and two from Cumberland County:

Two 2009 reports, one from Cape May County and one from Cumberland:

So, we have only a dozen sightings in five years and have found the species in just a handful of spots in only three of our eight counties. Elsewhere in New Jersey and throughout its range in North America, the European skipper is generally common to abundant and even “locally hyperabundant” (Cech & Tudor).

The species was first discovered in London, Ontario, in 1910, apparently transported to North America with its host plant, Timothy grass, Phleum pratense. Lauren Brown notes in her Grasses: An Identification Guide: “From 1870-1910 [Timothy] was a big cash crop because hay was needed to feed the horses that propelled the machines of the day. As gasoline-driven engines became common, the importance of Timothy waned, but it is still widely planted.” In fact, Phleum pratense now occurs in all states of the Lower 48, and the European skipper has expanded from Ontario east to New England, north to Newfoundland, west to Minnesota (with scattered populations farther west), and south to the Carolinas along the Appalachians.

For some reason, however, it has not become numerous in South Jersey or elsewhere on the Atlantic Coastal Plain — although Timothy seems a common “weedy” plant of yards, fields and roadsides throughout our area.

Why we see so few individuals of this butterfly seems an ecological puzzle.

Anyone have a theory about the answer? 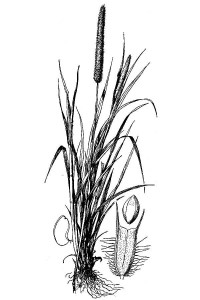 Timothy grass, Phleum pratense, from A.S. Hitchcock, Manual of the grasses of the United States (1950).

This entry was posted in Host Plants, Looking At Our Data, Skippers. Bookmark the permalink.