Turning over leaves of a white oak tree (Quercus alba) on Stockton’s campus on 5-17-12, I came upon three caterpillars that looked like possible lycaenids, so I brought two home to show Jesse and with the hope that we might be able to raise them.

David Wright kindly responded to our plea for help with the ID:

“These photos are definitely lycaenid larvae. They look more like hairstreaks than blues or coppers. Hard to tell which species without [having them] close at hand and a magnifying lens. If they were truly feeding on white oak (not just on a wanderlust looking for pupation site), then they could be m-album [white-m], calanus [banded], or favonius [oak/northern].”

We put them in a big plastic pretzel jar in our sun room, covered the top with cloth mesh, and fed them fresh white oak leaves from our backyard each day for the next week or so. They ate avidly, it seemed (lots of frass and munched leaves).

Both fed on white oak in captivity for the next week.

On 5-24-12 one went into a stage David noted was that of pre-pupal larva, when the caterpillar “takes the posture and loses color.” The second individual continued to feed on oak leaves for two more days, then followed into its pre-pupal stage.

Individual #1 moved into full pupal state on 5-27 and individual #2 followed two days later. (Both ejected their final frass beforehand, just visible to the left in the photo here). 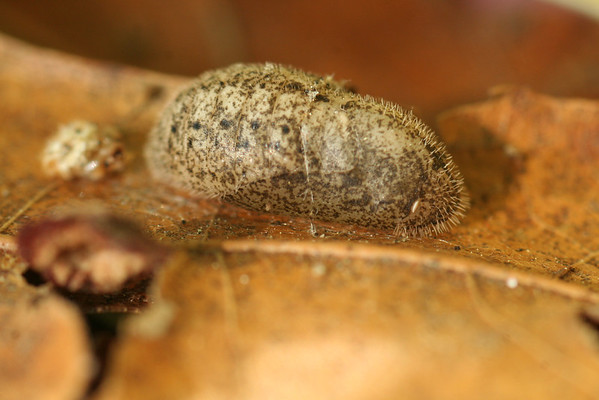 And then, for the next ten days+, the suspense built: which species did we have?

We took them along in our back seat (in their jar) for a trip to New England, worried that if we left them behind, they might emerge while we were gone. 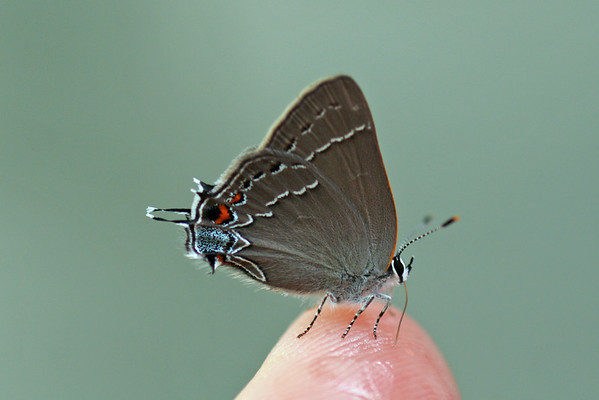 An oak hairstreak, Satyrium favonius, about an hour into adulthood, on June 9th, enjoying its first sugar meal, a mix of water and blue agave nectar. It sipped for a few minutes and then — quick as a wink — zipped off in first flight from our back porch.

The other individual has not yet emerged, but we are still hopeful — and seeing any oak hairstreaks in South Jersey is a treat. Last year none were reported to our log. They may be having a (relatively) good year in 2012, however, as we have three other reports of the species already this month.

Anyone interested in raising caterpillars might want to take a look at Todd Stout’s Raising Caterpillars.org, recommended by David Wagner, author of Caterpillars of Eastern North America:

PS: Finally, any readers who would like to see still more photos of our hairstreak sequence from caterpillar to adult can go to: