And now we have ten… 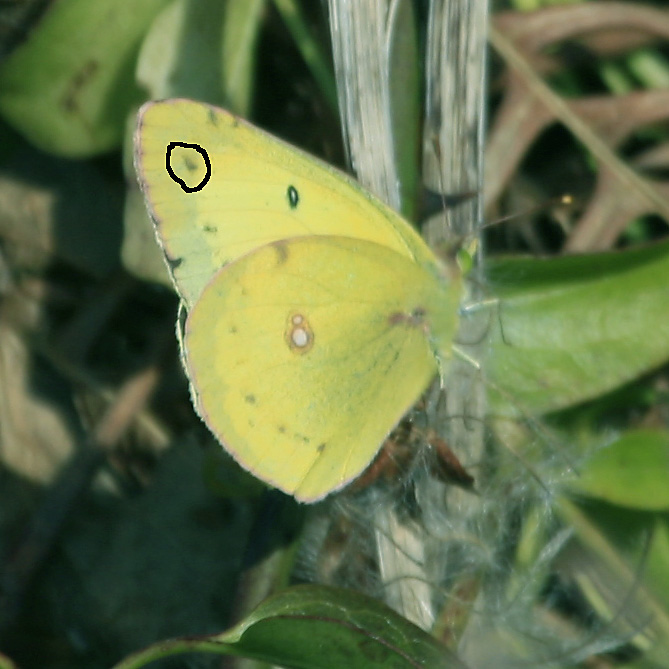 That last blog entry (“Double-Digit December?” below) proved obsolete almost as soon as it was posted. Mike Crewe has reported a tenth species for December — a clouded sulphur (C. philodice) that he found and photographed at the Beanery in Cape May on December 4th.

That gives us double-digits for December, a first for our log.

I think most observers would agree that our two local Colias species — C. philodice and C. eurytheme — combine to create one of the toughest of identification puzzles among South Jersey butterflies.

When a sulphur flies by, most of us (it seems) look first for orange in the wings. If we see that color, we call it an orange sulphur (C. eurytheme). Other ID cues are harder to apply. Because of wear and individual variations, not all orange sulphurs show orange — especially in flight; some individual females of both species are white (and can be mistaken for cabbage whites, as well as each other); other coloring and patterning varies in the two species; and finally they hybridize with one another. Jeff Glassberg notes in his Butterflies Through Binoculars (1993) that hybridization is so frequent that “calling all individuals with any orange above orange sulphurs is only an operational definition.”

Mike determined his ID by an entirely different field mark: the position of the dark, sub-apical spot on the forewing.

“It looks like a clouded to me based on the position of the black spot which I have circled. The spot falls right on the border of the black and yellow that shows through from the upper wing. Using Ron Gatrelle’s comments (pasted below) which Cech and Tudor follow, this would make it a clouded I reckon.”

Thanks to Mike for the photo, the link to Gatrelle’s article, and for the identification.

Ok, all you lep-chasers down there in the Cape May tropics, the new question is inevitable: are eleven species possible in December??!