June 30 is not quite halfway through the butterflyer’s year, so it’s too early for any final conclusions for 2011. Still, it’s tempting to feel bullish.

Last year, 2010, seemed very-good-to-excellent to most South Jersey butterflyers (and North Jersey observers as well), and at the moment, our results of 2011 seem even a little ahead of last year’s run.

An unsolved question: how should we factor observer effort and skills? Are we recording more butterflies simply because we have more observers out in the field for more hours (and we are growing steadily more knowledgeable each year)? Or, are there simply more butterflies flying this year than last?

Even without counting the two June NABA Counts at Belleplain and Cumberland (that data should be added shortly), June 2011 ran slightly ahead of June 2010. In short-hand form:

Species seen in adult form in June, 2011, with FOYs in italics:

The last FOY for June was great spangled fritillary recorded on June 29 by Sandra Keller at National Lands Trust Property in Salem. That gave us 82 species for the year (and on July 2 we added meadow fritillary for #83; see post below).

In June last year we found only two species we did not record in June this year: oak hairstreak and painted lady. (It has not been a good year for V. cardui so far, with only two reports for 2011, one in late April and the other in early May.)

Mulberry wings were found on their best-known colony on the Tuckahoe River on the border of Atlantic and Cape May Counties. Photo by Will Kerling, 6/19/11

Hairstreak numbers, which have been down since 2009 for most species, especially Satyrium, seem OK/mediocre at the moment, slightly up from last year’s humdrum totals. Juniper hairstreak has been notable in its absence, and we had just one report of a green hairstreak in June, by Ray Sampson who had a brief look of a juniper/Hessel’s at Lakehurst on June 18.

Coral hairstreak numbers seem up from last couple of years, and Edward’s hairstreaks were found reliably at the Hesstown powerline hot spot in Cumberland County.

Several observers have been adding caterpillar records on the log. Super! Keep at it, please. We should be charting them for an even better understanding of butterfly ecology in South Jersey, and, of course, they are beautiful too:

So, all in all, it seems like a good year so far, the weather has been cooperating, and July’s butterfly and butterflyer activity has continued in the same spirit as June’s ended. But let’s not take anything for granted, because just when you least expect it….. 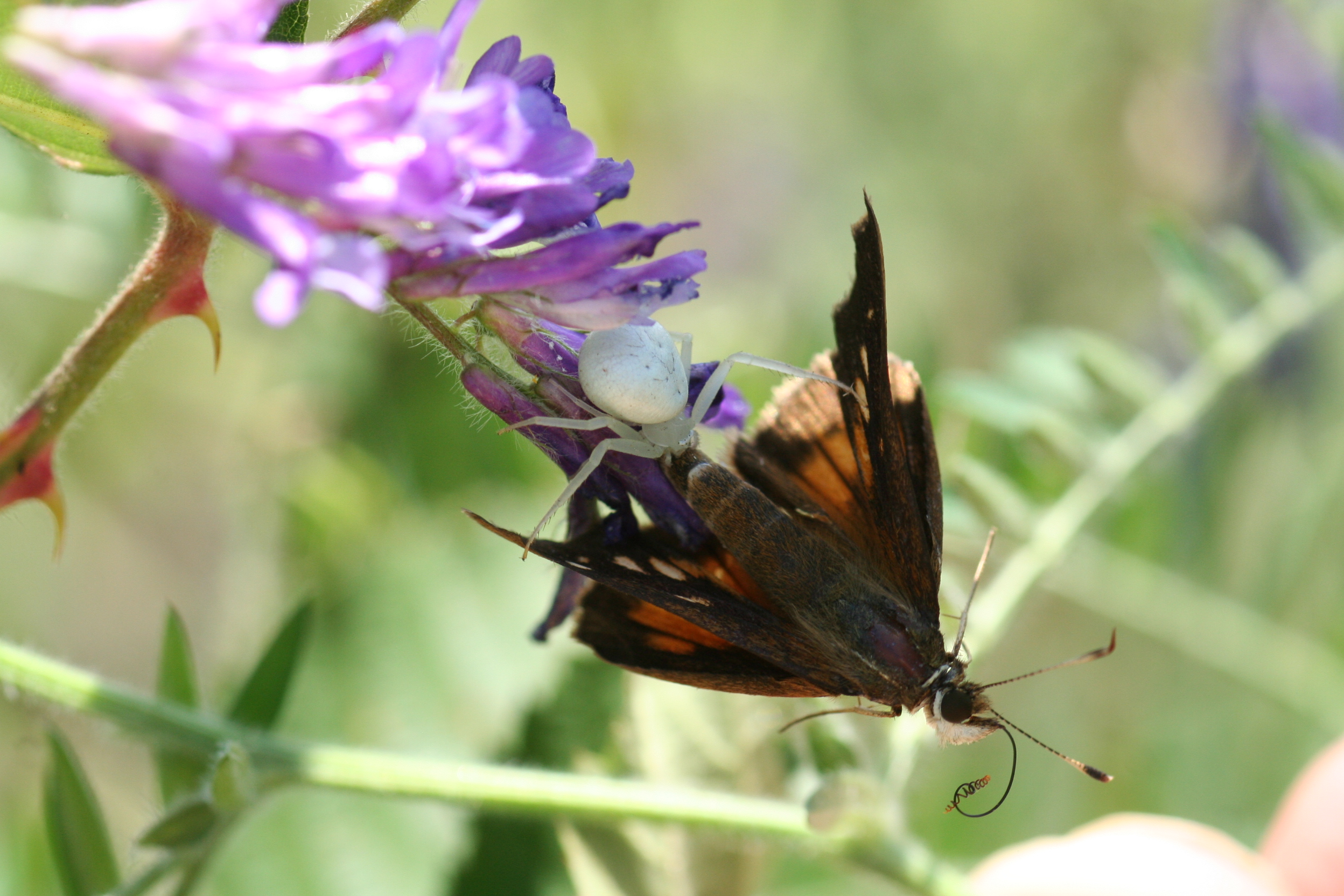 A crab spider dispatches a broad-wing on the Cumberland NABA 6/29/11.

Keep alert, everyone! And keep exploring and logging in!

Here’s a pdf of the June spreadsheet. Click on the + to enlarge. You can also find this pdf on the “In-Progress Compilation” page. If you would like it in Excel form, just email me.