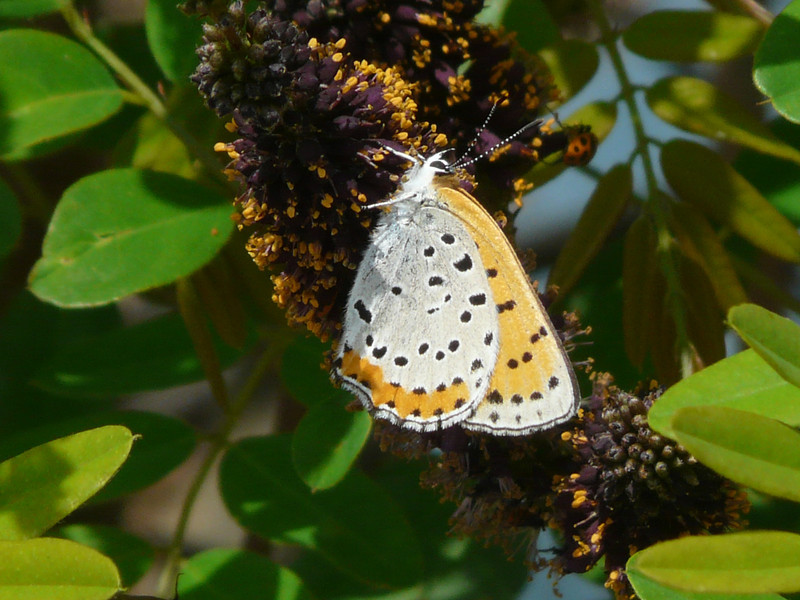 The latest FOY addition to our South Jersey Butterfly Log is a good one at any time, but especially at this time of year. We’ve had only a couple of bronze copper sightings reported to our log in 2009 and 2010, and only in September — presumably the second brood of the species.

On Sunday, a party of butterflyers and botanists, including Michael Gochfeld, Joanna Burger, Guy Tudor, John Lawrence, Karl Anderson, and others, stopped on the Sunset Drive Causeway where Dave Amadio had the species in September, 2010, and they found five individuals — of what must be a first brood.

“[The] highlight of the visit to Mannington was the Bronze Copper that John Lawrence found nectaring on Indigo Bush (Amorpha fruticosa). Eventually we counted five fresh individuals, both males and females, without making an extensive search.

“The location was the Sunset Drive causeway at 39 37’ 30” x 75 27’7” (according to the car GPS). This is 0.7 miles south of the junction with Maple Ave (which unfortunately had no street sign at that intersection).

“Curled Dock (Rumex crispus), the main known host, is an abundant roadside plant in the area, but right at the sighting spot there were several plants of Rumex verticillatus (Swamp Dock), which is not on our host plant list for this species, although Water Dock (R. orbiculatus) has been reported as a host.

It would be good to check out the R. verticillatus at this spot.”

And here’s a second follow-up note from him:

“I’m excited that the Bronze Coppers are first-of-year for South Jersey, and particularly because I assume this is the same spot that D. Amadio listed (Sunset Ave), so it sounds like a healthy colony.

“Note the dark purplish flowers of Amorpha fruticosa. There were lots of scattered Indigo Bushes along the water’s edge. Also Rumex verticillata is one of the very few native dock species in NJ, so it should be a host for the Bronze Copper. Otherwise, why should it depend on an introduced dock such as Curled Dock?”

This seems obviously a colony we should monitor — how long will they fly in this first brood? And how many can we find in that second September brood?

Cech & Tudor’s Butterflies of the East Coast notes, “During the decade we spent preparing this book, we encountered bronze coppers just twice, and we found them absent at many formerly reliable sites, especially near large urban centers.”

Cech & Tudor also comment, “[D]espite their large size and dramatic appearance, they have attracted little attention among conservationists….[This butterfly] is a troubled species that needs stewardship in our increasingly urbanized region.”

Thanks to Michael Gochfeld for his report and to Joanna Burger for sharing her exciting photos.

This entry was posted in First Emergences, Lycaenids. Bookmark the permalink.