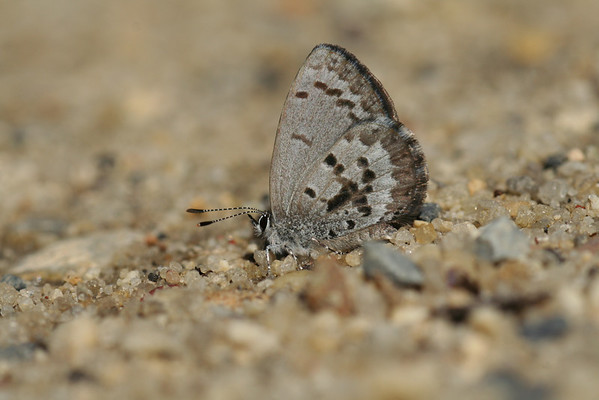 Thanks to some lovely sunshine (and the luck of the Irish?), butterflies are flying now, as of March 17th.

Temperatures climbed into the 60s & 70s yesterday, and we logged more species and more individuals in one afternoon than had been reported all year. Questionmarks, eastern commas, and mourning cloaks were reported in several sites in Cape May, Cumberland, and Atlantic Counties (and an anglewing, sp. from Gloucester Co.) And we added two new species for the year: one Cape May observer spotted our first cabbage white, and four different sets of observers in three different counties found blueberry azures, Celastrina lucia (a.k.a. C. ladon lucia).

The earliest azures generally appear in mid-March — as they have again this year — and are presumed (by most of us) to be blueberry azures. What was once considered a single species, the spring azure, is now widely recognized as several sibling species. At least four of them occur in our area: blueberry azure, holly azure, Edward’s azure, and summer azure.

The last, C. neglecta, flies later in the season (usually) and is the one member of the group that goes through multiple broods in a single year, with the last brood still flying into late September and even October. The summer azure seems to shows the lightest underwings, and all in all, seems generally the easiest of the complex to ID.

The three other species fly only in spring and are tough to tell apart by sight or even in photographs, especially because different morphs are possible within each population.

Blueberry azures, C. lucia, are the first to fly, but show much variation in the patterns of dark on undersides of wings. The individual above was the darkest of the individuals we saw on Mannheim Ave (Atlantic County) yesterday. That little patch in the hindwing led us to call it a “lucia” morph.

Below are two differently-colored individuals seen flying nearby. Here’s one that represents the majority pattern yesterday, apparently the “marginata” form, having the dark trailing edge but not a real “patch” in hindwing. 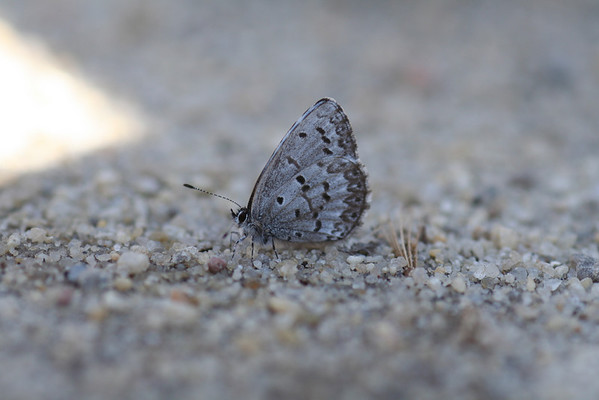 And here’s the lightest individual. It lacks both the dark trailing edge and the discal “patch.” This seems to qualify it as a “violacea” form [correct ?]. Seen a few weeks from now this could make a challenging ID: yes, it’s an spring azure, but which one? 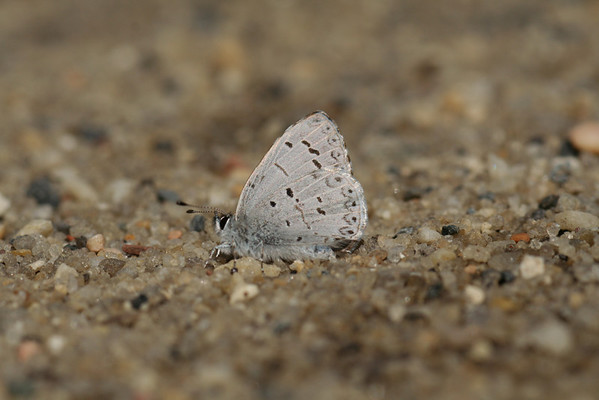 Gochfeld & Burger have an excellent discussion of the spring azure complex (including details of other sibling species in North Jersey) in their Butterflies Of New Jersey, pages 165-172, where they note how the work of David Wright & Harry Pavulaan over 20+ years has sharpened our understanding of the azure complex.

Finally, here’s a link to the Wright & Pavulaan’s original 1999 description of the holly azure, Celastrina idella, naming that species. Their article summarizes how spring azures have been variously understood and includes some very helpful photos and maps. If you are serious about learning how to ID azures, studying this article is a must.

This entry was posted in First Emergences, Lycaenids. Bookmark the permalink.